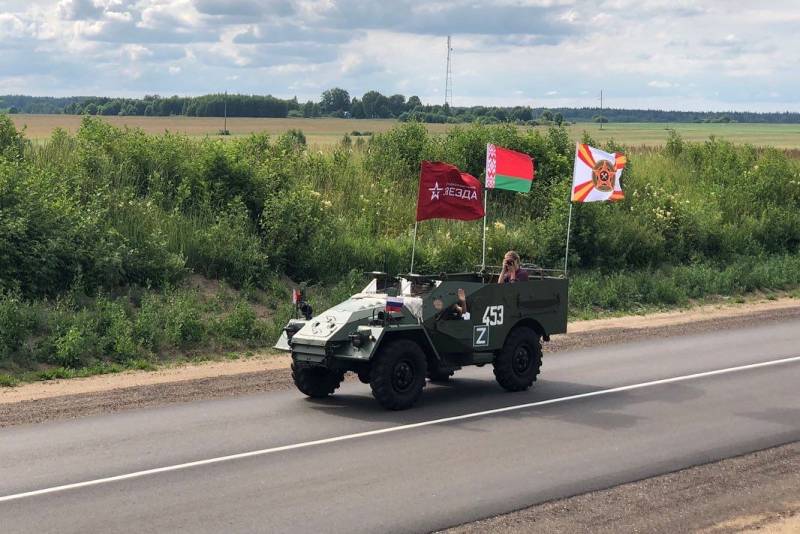 The seventh department is opened by the Interregional Public Organization for the Promotion of the Study and Operation of Military Equipment "Military Technical Society". This time in fraternal Belarus. Activists from the city of Bereza, Brest region of the republic, participated many times in armored runs and other events, together with their friends from the Military Technical Society, and in the near future, they will become its full-fledged branch.

Members of the future branch of the Military Technical Society in the city of Bereza, Brest region of the Republic of Belarus, participated in the rally through the places of military glory and burial places of the times of the Great Patriotic War "Belarus-Russia-2017", in the International armored run "Road of Courage" in 2017, 2018, as representatives of the participating city. In 2022, a delegation from the Berezovsky district of the Brest region took part in the fifth anniversary armored run "Road of Courage", timed to coincide with the 81st anniversary of the Battle of Smolensk along the route Moscow-Rzhev-Vyazma-Smolensk-Bryansk-Lyudinovo-Petrishchevo village-Moscow. During this armored run, which traditionally takes place with the use of demilitarized equipment, the team from Bereza decided to open a regional branch of the Military Technical Society in the Republic of Belarus.

"Our история began in 2010, when a museum of military glory of the units of the Berezovsky garrison was opened on the basis of the Berezovsky district military commissariat - the first such museum in the Brest region. We were united by love for our native land, knowledge of its history, and, of course, the desire to direct our efforts towards the formation of an objective attitude of society towards the historical past, the preservation and strengthening of the unity of the peoples of Russia and Belarus, - says the head of the future branch of the Military Technical Society in Bereza Brestskoy region of the Republic of Belarus Evgeny Skvortsov. - We believe that patriotism is really the strongest thing. But only if there is truth behind it. Truth is weapon patriotism.

Today, the members of the branch are a close-knit team of like-minded people, people with an active civic life position. The opening of a new branch is another step towards the formation of patriotism and patriotic education of young people, as well as the development of the Military Technical Society as an interregional organization of the Union State of Russia and Belarus.”

Thanks to joint work with the Berezovsky District Executive Committee, the military units of the Berezovsky garrison, the branch of the organization annually hosts
participation in military, military-patriotic and spiritual-moral events.

During a personal reception of citizens, the governor of the Brest region, Yuri Shuleiko, supported the initiative of the Berezovsky residents to create a division of the Military Technical Society in the region.