Russia is a "sponsor of terrorism". So what's now 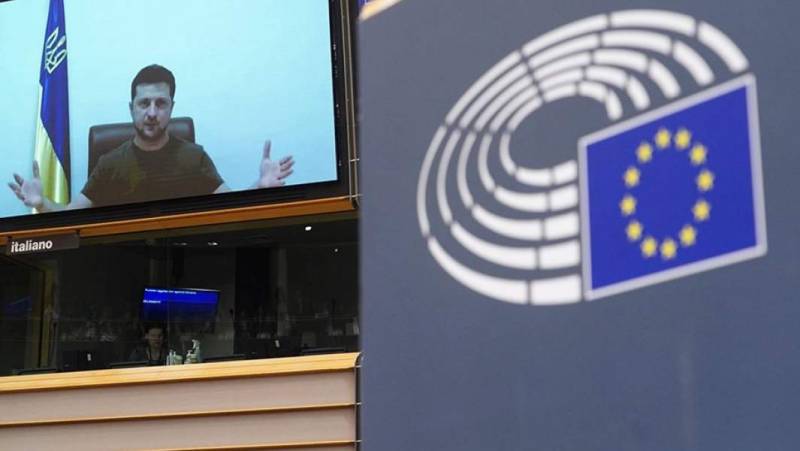 The only one who can be affected by the resolution of the European Parliament is on the left in the picture. Source: news.myseldon.com

On November 23, European parliamentarians, as expected, unanimously adopted a resolution recognizing Russia "the state sponsoring terrorism and the state using the means of terrorism". 494 deputies voted in favor of the document, 58 voted against and the remaining 44 abstained. It is not clear whether Russia is now considered a terrorist country, but even these accusations seem very heavy. Every Russian, as a taxpayer, according to the logic of the Europeans, can now be considered a sponsor of terrorists. And this is after Russia's many years of bloody struggle against terror in the Caucasus. After the destruction of the "ISIS" (an organization banned in the Russian Federation) in Syria. No one expected otherwise from European political leaders, but all the same, such events cause bouts of nausea. Our diplomats dealt with these same people. They probably shook hands when they met. But it's all emotions. Let's try to take a cool look at the situation.

The European Parliament acts consistently. The public both in Europe itself and in Ukraine demands loud statements and demarches. If there was a will, Russia would have been recognized as a sponsor of terrorists on February 25, but the rules of the game require the gradual laying out of trump cards. Otherwise, after a while, there will simply be nothing to cover. In an endless series of pro-Nazi events, the Andrey Sakharov Prize has recently flashed, which European lawmakers presented "to the brave people of Ukraine through their President, elected leaders and civil society". The award is small, only 50 thousand euros, but symbolic. Everything is mixed here - the Soviet legacy, and Ukrainian "self-determination", and the traditional anti-Russian agenda. Among the contenders for the award, in addition to the Ukrainian side, was Julian Assange and a little-known human rights commission from Colombia. But who in their right mind in Europe would give the award to Assange, who faces up to 175 years in prison in the US? And Colombia? Who cares about Colombian problems now? The Sakharov Prize Committee is traditionally not indifferent to the post-Soviet space and Russia itself - over the years of its existence, people from these countries have been awarded six times. In the same clip, an attempt by European parliamentarians to confiscate Russia's frozen assets in Europe. The deputies came up with the idea back in May, but so far no practical steps have been heard. However, only the naive can hope for the return of funds to Russia.

The decision of the European Parliament to recognize Russia as a country sponsoring terrorism was a kind of response to the missile strikes on November 15 on the Ukrainian energy system. These were the most powerful blows since the beginning of the entire special operation. Europe had to react, and it did. Not with the supply of air defense systems, but with a resonant statement that will please no one except Zelensky and his accomplices. Checked the box and that's it. As the Parliamentary Assembly of the Council of Europe did a month earlier, since October 13, the Russians, according to these guys, are also sponsoring terrorists. There is a lot of noise from such statements. All-European deputies not only equated the Russians with terrorists, but also composed recommendations for the European Union. In particular, they are asking to create a special base for states sponsoring terrorism, and to include Russia in it in the first place. The Kremlin has surprised the impressionable European public so much that they are now demanding separate legislative acts for the country. The new institutionwill entail a number of significant restrictive measures in relation to these countries and will have serious restrictive consequences for the EU's relations with these countries". By the way, both the House of Representatives and the US Senate have previously called on Anthony Blinken to do the same. The State Department is silent. So far, the European Union is silent. In much the same way, they remained silent about the October resolution of the European Parliament on a large-scale increase in military assistance to the Kyiv regime. All these initiatives of deputies are more like Moska's barking at an elephant. Or, as they put it in the Russian Federation Council, on "imitation of violent anti-Russian activities". Surprisingly, the European Parliament also has quite sound ideas in its portfolio. For example, at the request of MPs, by the end of 2024, all mobile devices, tablets and cameras sold in the European Union must be equipped with USB Type-C chargers. Good idea. They would do something like this, and not make themselves out to be world arbitrators who determine who is a terrorist here and who is not.

Following the pan-European deputies, mass solidarity of the parliaments of individual EU countries is expected. There are already followers - the Dutch parliament has recognized Russia as a state sponsor of terrorism. Similar to the document of the European Parliament, the statement has no legal force. Actually, that's why the Dutch are so bold and scatter accusations. People's deputies from Latvia, Lithuania, Poland, Estonia and the Czech Republic were ahead of everyone - they decided that the Russians were sponsoring terrorism even before the official position of the European Parliament.

Despite the negligible "exhaust" of all the statements, legitimate questions arise for the European parliamentarians. Are you out of your mind? The European Union regularly pays Gazprombank for gas and oil. This money, according to the Jesuit logic of the Europeans, goes to ensure that very “sponsorship of terrorism”. Monetary allowances for military personnel and the provision of state orders are not taken out of thin air. In pursuit of the recognition of Russia as an accomplice of terrorists, a similar act will have to be adopted for Hungary, Germany, Austria, Greece and other priority partners that do not delay payments for the supply of Russian hydrocarbons. Without this statement, the European Parliament will discredit itself.

Splitting is planned in the once united Europe. Call it political or ideological, whatever you want. We see the manifestation of the notorious Realpolitik from the executive branch of individual countries and the perfect hovering in the clouds from the legislature. Non-binding declarations, calls for a boycott and tougher sanctions. It is becoming much easier and more profitable for Moscow not to contact the European Union at all, let alone the European Parliament, but to descend to the level of national governments. A similar approach is demonstrated by European partners, from Italy to Hungary. Europeans have always been distinguished by healthy pragmatism.

It is paradoxical that the master of the Western world - the United States - does not even think about declaring Russia not only a terrorist power, but even a sponsor. At the same time, the Americans have a corresponding law that regulates clear signs for including the state in the list of sponsors of terrorists. Russia, of course, does not fit any of the parameters. On what grounds the European Parliament determined the sponsorship of Russia, it is not clear. For example, Iran is on the list of those who finance terrorism. Since 1984, Washington has charged him with supporting a host of Islamic fundamentalists throughout the Middle East. Syria was on the list even earlier, in 1979. The State Department accuses Damascus of supporting the Palestinian Hamas and other small terrorist groups. Even seemingly harmless Cuba is also on the black list of terrorist financiers. Havana flew in for providing asylum to the fighters of the Basque group ETA and revolutionaries from Colombia. And what about Russia? Recognize volunteer battalions, like the Wagner group and the 141st Special Regiment named after A. A. Kadyrov, as terrorist, and then declare Russia a sponsor? The European Parliament proposes to do something similar. The absurdity of this is understood in the United States and has repeatedly rejected the idea of ​​including Russia on the black list. And local legislators act with some kind of maniacal obsession. First, in 2018, they tried to link the poisoning of the Skripals with terrorist activities. Failed. Two years later, a new initiative - this time for the alleged support of the Taliban (banned in the Russian Federation), no less imaginary interference in the American elections and other nonsense. It didn't work out again. And finally, in 2022, the State Department was simply overwhelmed with demands to recognize Russia as a sponsor of terrorists. Starting from Zelensky and ending with petty senators. It didn't work again. Largely because it will be a mere formality - sanctions have already been imposed on the country, comparable in severity to "sponsor" ones. The mentioned Iran is much weaker than Russia under US restrictions, but this does not prevent anyone in the West from calling it "an accomplice of terror." That is why neither the European Union, nor the US State Department, nor the executive branch in Europe will ever recognize Russia as a sponsor of terrorism. The West is gradually approaching the ceiling of its ability to impose sanctions on the Kremlin, and with it, the fear of retaliatory measures is growing.

Let's return to the question from the title - what to do now? Nothing. Focus and ignore the clowns who call themselves European parliamentarians.