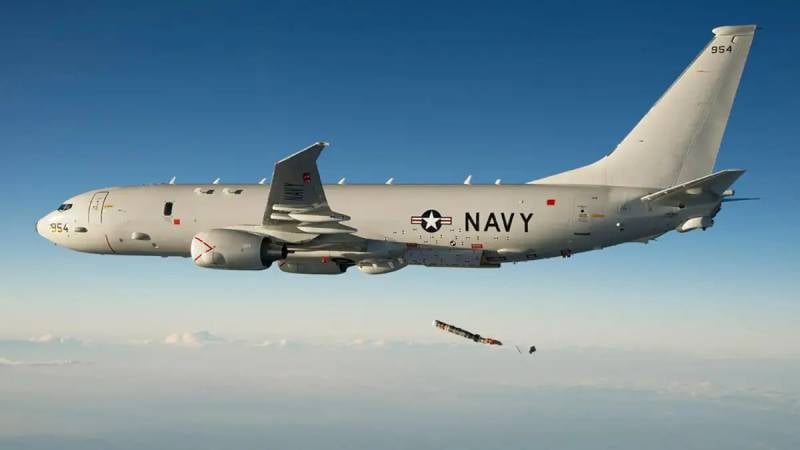 Marine aviation The US Navy has brought a set of HAAWC equipment to the stage of initial operational readiness. It is intended for the P-8A Poseidon base patrol aircraft and should complement the standard anti-submarine weapons in the form of Mk 54 light torpedoes. With the help of such kits, it is planned to get rid of a number of objective limitations and expand the combat capabilities of the aircraft.

The P-8A patrol/anti-submarine aircraft carries a variety of search equipment and sonar buoys designed to search for and detect underwater targets. To destroy such targets, depth charges or torpedoes of the Mk 54 Lightweight Torpedo type are used. Armament is transported on five hardpoints in the internal compartment and on six external ones.

The Mk 54 aircraft torpedo is equipped with a parachute system that reduces the speed of descent and ensures safe entry into the water. However, the maximum drop height is limited - if it is exceeded, the descent speed will be excessive and will lead to damage or destruction of the torpedo.

Accordingly, before dropping the torpedo, the Poseidon must leave the working altitude of the patrol and decrease to an acceptable limit. As a result, the range of observation, communication, etc. is sharply reduced. In addition, during the time it takes to reach a given altitude, the aircraft may lose contact with the target, and its restoration is associated with certain difficulties. Climbing to working height also takes time.

The way out of this situation is obvious: the aircraft needs an anti-submarine weapon system that allows it to drop torpedoes from a patrol height. As far as is known, such issues were worked out at the stage of development of the future P-8A, but until a certain time this topic did not receive all the necessary attention. 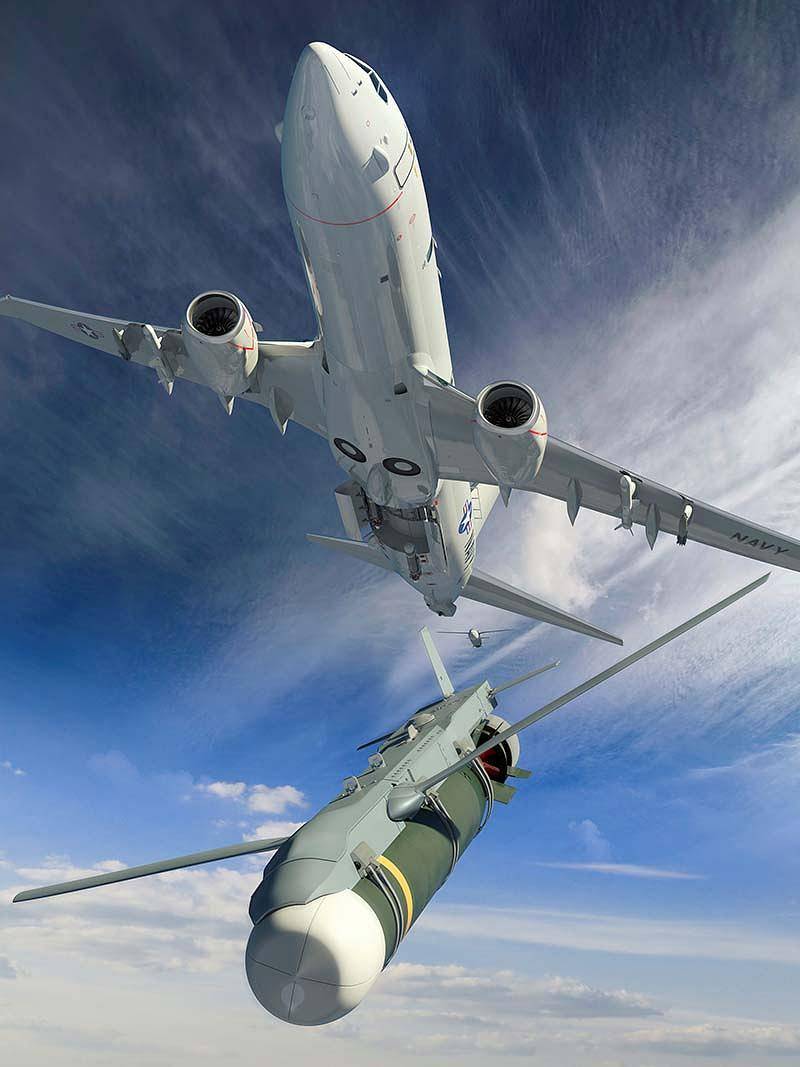 The development of a new anti-submarine system capable of optimizing the use of existing torpedoes started in the mid-8s. The contract for its creation was received by Boeing, which had previously created the P-XNUMXA aircraft. The project received navy designation HAAWC (High Altitude Anti-Submarine Warfare Weapon Capability - "High Altitude Anti-Submarine Warfare Weapons").

It took several years to create a new project. Boeing has developed an ALA (Air Launch Accessory) device designed for installation on the Mk 54 torpedo. Work has also been done to integrate new components into the Poseidon weapons system.

At the end of the tenth years, the Navy and Boeing began testing both individual tools and the entire HAAWC system as a whole. After a preliminary check, torpedoes with an "accessory" of the ALA type were dropped. In general, the tests were successful, and according to their results, the system was recommended for adoption.

In mid-August 2022, the US Navy issued an official contract to Boeing for the full-scale serial production of HAAWC in order to re-equip combat units. The number of ordered kits was not reported. At the same time, they specified that the contractor will supply finished products, as well as accompany them during operation, maintain and improve them.

On November 22, Boeing announced that the HAAWC system had reached the level of initial operational readiness. Due to mass production of products of a new type, it was possible to equip one of the patrol aviation squadrons, and now it can use Mk 54 torpedoes without the old restrictions. In the foreseeable future, the transition of the first unit to full operational readiness is expected. In addition, a similar weapon will receive the 11 remaining squadrons on the Poseidons. 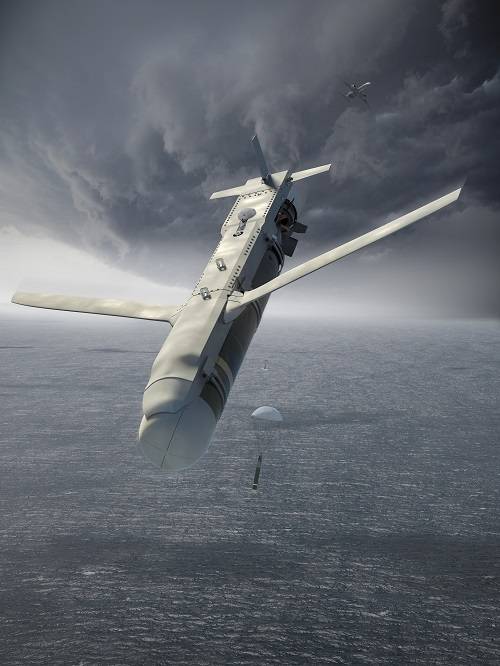 HAAWC in action: one torpedo is gliding, another is already parachuting
However, the system is not yet ready for full operation in all conditions and in all modes. According to known data, the Navy and Boeing have not yet tested it at all expected altitudes. The remaining tests with the release of torpedoes from maximum heights, up to the ceiling of the carrier, will take place in the near future.

The objective of the HAAWC project was to ensure the safe launch and entry of the torpedo into the water. The existing parachute system or its analogues could not cope with such a task, and a gliding descent option was chosen. It is implemented using the AL device, which turns a torpedo into a kind of aircraft.

The ALA product is a non-motorized drone based on the units of existing missiles such as the AGM-84H/K SLAM-ER. It has an elongated flat fuselage, on the bottom of which there are torpedo mounts. In the central part of the fuselage there is a folding wing, in the tail there is an empennage with a stabilizer and a keel. The length of the product does not exceed 3 m with approximately the same wingspan.

The ALA product uses control systems borrowed from the JDAM family of bombs. The onboard autopilot works according to the data of inertial and satellite navigation systems and issues commands to steering machines in plumage. Two-way communication with the carrier is provided for receiving commands and transmitting telemetry.

A Mk 54 torpedo is suspended under such a “drone” in its original configuration, including a braking parachute. The light torpedo has a caliber of 324 mm and a length of 2,72 m; weight - 276 kg. The torpedo is equipped with a liquid fuel heat engine, due to which a speed of more than 40 knots is achieved; range - more than 9 km. Active and passive acoustic guidance is used. The torpedo carries a charge of 44 kg.

The principle of operation of the HAAWC kit
A Mk 54 torpedo with an ALA device is placed on the internal or external suspension of a P-8A aircraft. No suspension modifications are required. In addition, there is no need for a major change in the on-board devices of the carrier or their software.

The exact flight characteristics of the HAAWC system have not yet been reported. According to the terms of reference, it should ensure the safe launch of a torpedo in a wide range of altitudes, but specific numbers have not been published. ALA torpedo range must exceed 20 nautical miles.

The principle of operation of the HAAWC kit is quite simple. Having found an underwater target, the aircraft crew enters the necessary commands and data into the device. After reaching the line of use of weapons, a torpedo is dropped from the ALA. The aircraft delivers a torpedo to a given point, where it drops it from a small height. Then the torpedo is lowered into the water with the help of a parachute and begins to work according to the standard program. ALA product no longer needed falls to the side and sinks.

The customer and the developer indicate that the adoption of HAAWC into service allows patrol aircraft to get rid of several characteristic difficulties, as well as to gain new opportunities. The main result is the possibility of dropping a torpedo at almost any moment of the flight, without the need for a preliminary descent.

Due to this, the aircraft does not lose time and can attack the underwater target as quickly as possible after it is detected. Also, it becomes possible to track the target almost until it is hit by a torpedo - with fixing the result of the use of weapons. At the same time, the risks of losing the target are reduced, and it is also easier to restore contact with it. 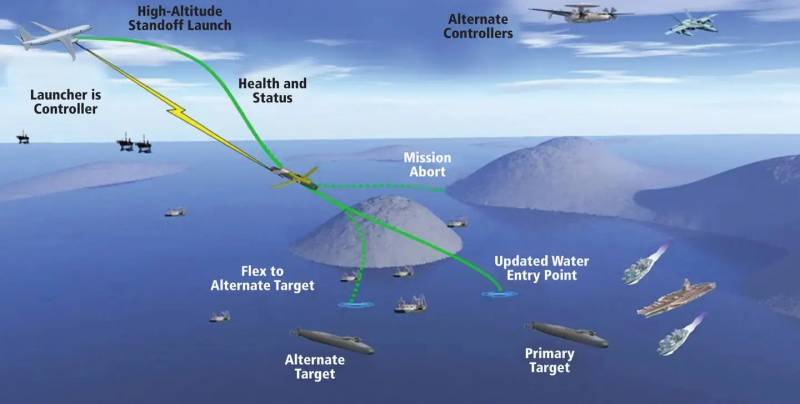 Using HAAWC in Difficult Environments
Unlike "regular" Mk 54s, "gliding" torpedoes can be dropped from a long distance. Due to this, and also due to the high maneuverability of the ALA device, it is simplified to deliver the torpedo to the optimal dive point and start the search for the target. The solution of such problems by aircraft may not be so effective.

The HAAWC system has the ability to retarget in flight. When the tactical situation changes, target designation is clarified, etc. the carrier aircraft can form a new flight mission and redirect the torpedo to another point.

In the short and medium term, the P-8A patrol aircraft will remain the only HAAWC carrier. Integration with other aircraft is not yet planned. Nevertheless, the possibility of using such kits as part of a full-scale layered anti-submarine defense is not ruled out. In this case, Poseidon with Mk 54 / ALA will work on target designation of third-party means. A gliding flight will make it possible to more fully use the potential of such a multicomponent system.

Thus, at the disposal of the patrol aircraft of the US Navy there is a new tool that simplifies the fight against submarines. So far, we are talking only about the initial operational readiness in one of the squadrons and the continuation of tests to determine all the characteristics. However, the HAAWC program is moving forward, and over the next few years it is expected to receive all the results in the form of the required characteristics and deployment of weapons in parts.

These processes pose a certain danger to the submarine forces of third countries. It is obvious that the fleets of potential US adversaries are monitoring the development of P-8A patrol aircraft and their weapons, as well as preparing the necessary response measures. How exactly they plan to deal with "planning torpedoes" is still unknown, but such means will be found.