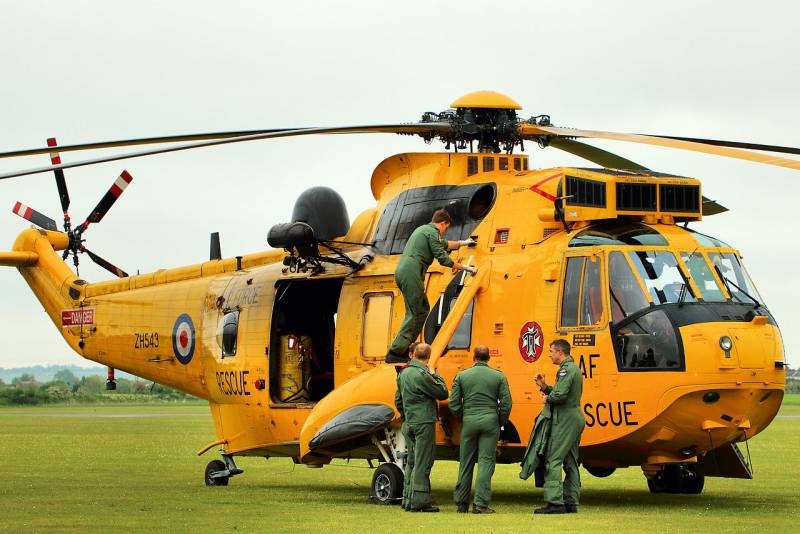 A Sea King helicopter from the KVVS in a search and rescue configuration. Photo by Wikimedia Commons

Great Britain continues to support the Kyiv regime with the supply of weapons and equipment. Now it is reported about the transfer of search and rescue helicopters Westland Sea King and the training of crews for them. So far, it is planned to transfer only a few cars, but the announced features of such assistance suggest that this batch will not be the last. However, the results of deliveries in any case will be far from what Ukraine needs.

On November 23, during his visit to Norway, British Defense Secretary Ben Wallace announced new military-technical assistance for Ukraine. This time, they plan to transfer 10 artillery shells to the ally, as well as Westland Sea King helicopters in search and rescue configuration, which were previously in service with the naval aviation.

The British Armed Forces have already begun the procedure for the transfer of equipment, and they are going to complete it in the near future. The helicopters will go to the relevant units of the Ukrainian Air Force and will have to supplement the vehicles remaining in them. At the same time, the number of helicopters for Ukraine was not officially announced.

The Royal Navy is now completing the training of Ukrainian crews. According to the minister, 10 crews have been retrained to work on the Sea Kings. Taking into account the staffing of the crew, we can talk about the training of at least 20 pilots. Also preparing the technical composition. In the near future, all of them will return to Ukraine and will have to start operating helicopters. 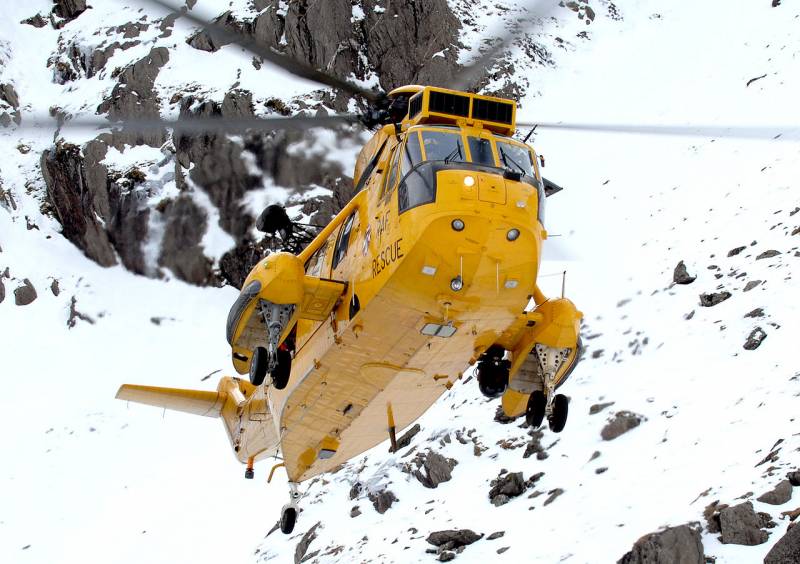 Helicopter on mission. Photo by the British Ministry of Defense
In the wake of the Defense Minister's statements, some details appeared in the press. Thus, The Times, citing its sources, writes that only three helicopters have been prepared for the transfer. The first of them has already arrived in Ukraine and is being prepared for operation. In the near future, the remaining two will be delivered to the new duty station.

It is curious that the number of trained crews currently exceeds the number of helicopters transferred. This circumstance may hint at the future plans of the British command. It is possible that Sea King deliveries will not be limited to the first batch of three helicopters. Following them, seven more such vehicles can be transferred, which will allow all trained crews to be occupied. Further deliveries cannot be ruled out - the UK has a sufficient amount of such equipment.

The Westland Sea King multi-purpose helicopter, which was in service with the British KVVS and KVMF, is a modification of the American Sikorsky S-61 / SH-3 Sea King. The basic model entered service in the early sixties and soon became of interest to the British command. The result of this in 1966 was an agreement on the development of new modifications of the American helicopter and the subsequent launch of mass production. The British side in the project was represented by Westland and a number of subcontractors.

The first flight of the modified Sea King took place in September 1967. The tests encountered some difficulties, but they were completed at the very end of the decade. In 1969-70. the new helicopter went into series and began to enter service with the CVMF naval aviation. Later, Westland received orders from the KVVS. 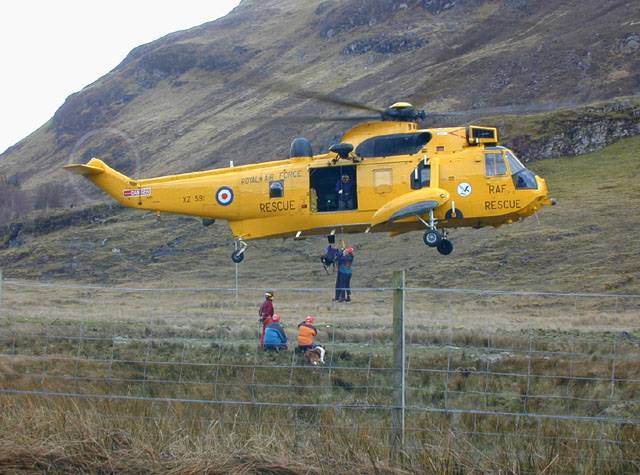 In the process of salvation. Photo by Wikimedia Commons
Serial production of Sea King began with the anti-submarine version of the HAS.1. It was later replaced by the improved HAS.2. In the future, HAS.1 / 2 was upgraded several times, incl. with the assignment of new indexes. Search and rescue helicopters HAR.3 and HAR.3A were also built. In the early eighties, the fleet received long-range radar surveillance helicopters.

Sea King helicopters were built until the mid-nineties. By this time, customers have received approx. 360 helicopters of all modifications. The bulk of the equipment entered the KVMF and the British Air Force. Orders were also carried out from a number of foreign countries, with some wishing to receive their own modifications.

As the operation and development of the resource, the helicopters were gradually decommissioned. By the mid-2015s, Sea King helicopters were considered completely obsolete, and the British armed forces decided to abandon them. As of 25, the KVVS retained only 3 HAR.13A vehicles in two squadrons. Naval aviation at that time had one squadron with 7 AWACS helicopters of the AEW.16 version and one with 5 auxiliary HU.XNUMXs.

In 2015, the Sea King was decommissioned by the KVVS, and in 2018, the KVMF also abandoned such helicopters. The equipment that remained in operation went to storage or to museums. Now a number of helicopters from the reserve have been prepared for operation and are being sent to Ukraine.

In terms of design, the British Sea Kings differ minimally from the original American S-61s. This is a multi-purpose helicopter of a single-rotor scheme with a tail rotor. The large section fuselage accommodates a spacious cabin with the possibility of installing various equipment and equipment. Some modifications can carry sonar buoys or weapons. 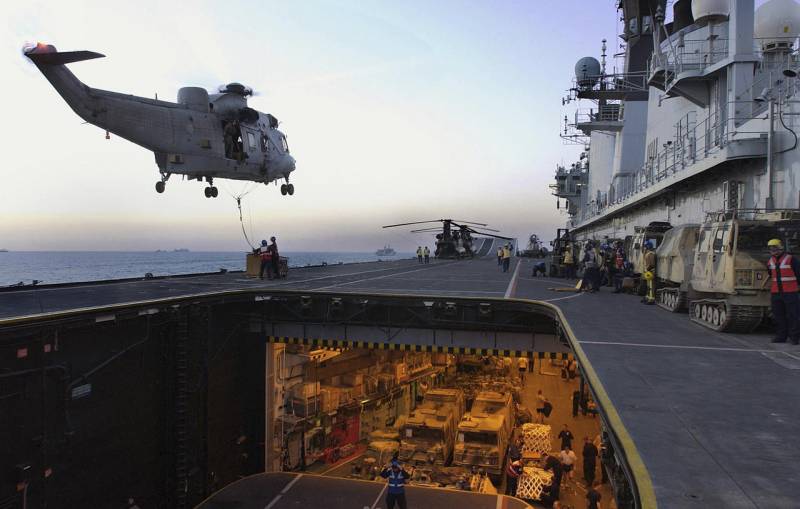 Sea King above the deck of the aircraft carrier HMS Ark Royal, 2003. Photo by the British Ministry of Defense
The length of the helicopter along the fuselage is 17 m, the diameter of the main rotor with five blades is 18,9 m. Depending on the modification and equipment, the empty Sea King weighs at least 6 tons. The maximum take-off weight is at least 9,7 tons.

The power plant includes two Rolls-Royce H.1400 Gnome turboshaft engines with an HP 1660 power. With their help, the helicopter can reach speeds of more than 210 km / h. Range - at least 1200 km.

The helicopter received navigation and flight equipment that met the requirements of the late sixties. In the future, the avionics were repeatedly updated to improve performance and improve overall capabilities. The composition of the target equipment also changed.

Thus, the HAR.3 search and rescue helicopter was originally equipped with a MEL ARI.5955 search and rescue radar. In the HAR.5 project, it was replaced by the more advanced ARI.5991 Sea Searcher with an increased detection range. Modifications for third countries received other radars. With the help of a standard radar, helicopters could detect surface objects, as well as find traces of the crash and victims to provide assistance. 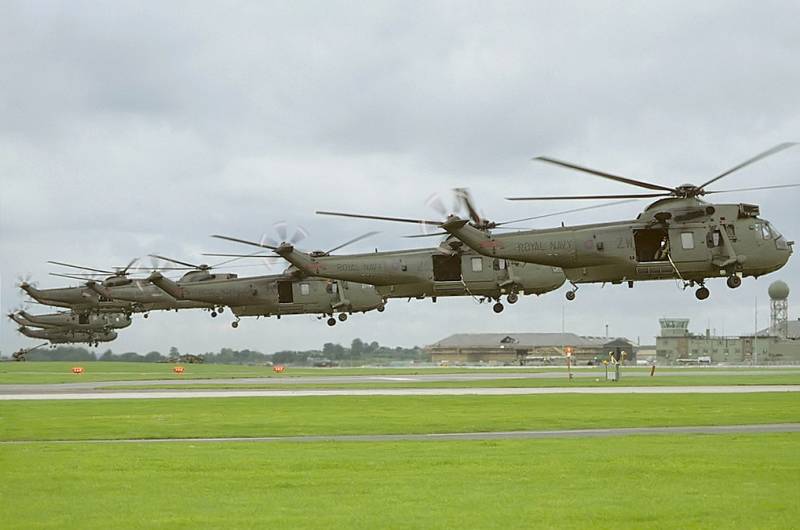 Sea King HC.2 - modification for "commando". Photo by Wikimedia Commons
The search and rescue helicopter received various equipment and tools to work on the scene of accidents and provide assistance. The cargo cabin could accommodate more than 25 seated passengers or up to 9 victims on a stretcher. The carrying capacity exceeded 3,5 tons with the load placed inside the cab or on an external sling.

For self-defense, Sea King helicopters received a 7,62-mm machine gun mounted in the side door. Anti-submarine vehicles, in turn, were equipped with torpedoes, depth charges or anti-ship missiles.

According to The Military Balance 2002, at the beginning of this year, Ukraine had at least 110 helicopters of various types. In the future, she managed to restore a certain amount of equipment to a flying state. In addition, a significant number of helicopters came from foreign countries as assistance. All this made it possible to almost double the helicopter fleet.

However, such an air fleet suffered fatal losses. According to the Russian Ministry of Defense, almost 180 helicopters of various types have been destroyed so far. The exact number of remaining equipment ready to fly and perform tasks is unknown. It is unlikely that it exceeds a few dozen, and in addition, there must be various problems of a technical and operational nature. 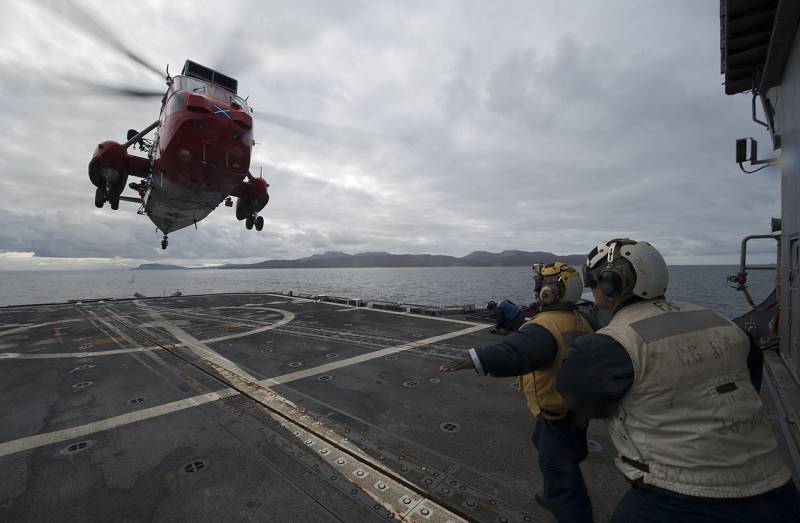 British "Sea King" at the international exercises, 2012. Photo by the US Department of Defense
Under such conditions, the Kyiv regime is ready to accept any help, for example, obsolete and long-decommissioned British Sea King helicopters. They can be used to transport personnel and cargo - as a replacement for the lost Mi-8s. In addition, the presence of an airborne radar allows the use of such helicopters in a reconnaissance role. It is impossible to exclude attempts to make handicraft equipment of vehicles with any weapons.

However, there will be little benefit from such assistance, primarily because of its small volumes. The British press reports only three helicopters, while the Minister of Defense speaks of 10 crews. Even a dozen helicopters will not make up for the losses of recent months and will not affect the general condition of the helicopter fleet. Moreover, even the transfer of all Sea Kings from storage will be useless. It should also be taken into account that a small number of equipment will not allow for its full-fledged, permanent and efficient operation and use. At the same time, the risk of hitting newly received helicopters remains high - and they will add to the list of losses.

In response to requests

In recent months, the Kyiv regime has been begging foreign partners for long-range strike weapons, tactical aircraft, and so on. - but so far not too successful in this. Instead of the desired modern complexes, he is provided mainly with outdated samples of various kinds. So, the UK this time decided to allocate decommissioned helicopters to Ukraine.

Obviously, three to ten Westland Sea King helicopters are simply not enough to solve the urgent problems of the Ukrainian armed formations. However, in the current situation, they do not have to choose, and the British "friends" do not even think of providing more useful assistance.