November 1, 2012
10
In one of the previous articles, a series of self-defense pistols by Taurus under the general name Slim was described. These pistols were one of those rare occurrences when the balance between relative ease of use was respected. weapons and its minimum size, which made these guns an excellent weapon for self-defense. Going along an unusual way, which is accepted in the world of weapons, and instead of reducing the size of the pistol, on the contrary, increased them, Taurus created the PT 2045 pistol model, which was presented to the general public in 2009. It is with this gun that we will try to familiarize ourselves with this article, but it turned out to be quite interesting, even though it is in many ways similar to the Slim pistol family. 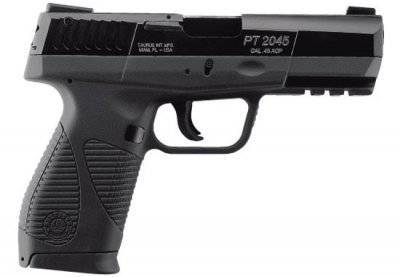 It would seem that just an increase in the size of the weapon should not affect strongly its appearance, but even if the compact version of the weapon and the full-sized one are put side by side, then the differences between them can be seen with great difficulty. The reason for this is that the silhouette of the weapon has changed a lot, in addition, the slanting faces of the Slim family pistols on the slide are smoother after the window for ejection of spent cartridges, which makes the appearance of the weapon unfamiliar. Why was this weapon created by Taurus? The answer lies in the fact that the Slim pistol family does not have a sample for the .45АСР cartridges to fix this and at the same time check the buyers' reaction to the oversized pistol created PT 2045. Thus, it turned out a pistol with a total length of 185 millimeters, with a barrel length 108 millimeters, weight without cartridges 890 grams. As well as in the Slim pistols family, plastic used in the frame is widely used in this weapon. However, plastic is plastic, but metal could not be avoided, because the weight of the gun is close to 900 grams, which is still less than that of similar models made entirely of steel. It is noteworthy that despite the increase in size, the thickness of the gun remained minimal, so it is still Slim.

The right side of the weapon is completely unloaded from any controls, except that the double-sided slider, which is designed to disassemble the weapon, can be counted as one of the elements. On the left side of the gun there is a complete set of all the "pushing" and "cruising", which are found in most models of pistols. So immediately above the pistol grip, closer to its rear part, there is a fuse switch, which turned out to be not the most convenient in a full-size weapon model, since it is convenient to control it with your left thumb while holding the pistol with two hands, which was especially important for small, lightweight models. However, it is more convenient to shoot from two hands and from the full-size model of the weapon. However, a fuse is not available for switching with a holding hand, which is still a minus. But the shutter lag button is located in such a way that the thumb itself falls on it when the store is changed, so for this the gun is already a plus. Despite the fact that the location of the fuse switch indicates a more comfortable use of two hands, when using the gun, the safety clip does not have a deflection for the index finger of the second hand in its front part, the manufacturer decided to restrict itself to a wavy ribs. Trigger forked, has an automatic safety device that should protect the weapon from accidental pressing the trigger. On the frame of the weapon there are absolutely useless recesses, which, according to the logic of things, should have been located in the same place as the switch for disassembling the weapon, but are located much further. Their location suggests that, apparently, someone made a mistake when designing a form. In the frame under the barrel of the weapon there is a place for mounting laser designators or a compact flashlight. The magazine eject button is located at the junction of the safety bracket to the pistol grip. Sights PT 2045 open, consist of a pillar and front sight, do not have the ability to adjust and can not be replaced with sights of another option. In general, the gun turned out quite ergonomic, if we forget about the switch of the non-automatic fuse, in addition, the small thickness of the weapon has a positive effect on its hidden wearing, despite the fact that the other dimensions have little to do with it. So this gun can also become a weapon for self-defense, if you like it. 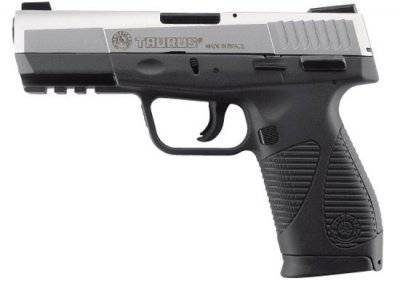 Automatic pistol built according to the scheme with a short stroke of the barrel, the locking is carried out for the window for ejection of spent cartridges. Thus, in the normal position of the weapon, the protrusion above the chamber is included in the clutch for ejection of spent cartridges, and the barrel itself is located parallel to the housing-bolt. But during the shot, the powder gases push the sleeve back, which becomes the basis for the work of all automation. After receiving a pulse from the liner, the shutter-casing begins to move backward, compressing the return spring and dragging the barrel of the weapon with it. The barrel and the shutter casing would move together until it stops, if there were no tide under the weapon chuck, in which a groove was pierced through which the pin, reinforced in the frame of the weapon, passes. When moving the housing-bolt and the barrel, the interaction of this groove and pin leads to the fact that the breech of the barrel is lowered, respectively, the protrusion above the chamber leaves the clutch with the window for ejection of spent cartridges. The barrel stops, and the shutter-casing continues to move, removing the cartridge case and throwing it out, and moves to its extreme rear point, continuing to compress the return spring. After the shutter casing reaches its rear position, the return spring located under the barrel of the weapon begins to straighten, which causes the casing-shutter to move in the opposite direction, that is, forward. On his way back, he pulls a new cartridge out of the store and inserts it into the chamber, resting on the breech, the slide casing pushes it forward, which causes the tide under the cartridge chamber to interact with the pin, but with the opposite effect - the breech rose. Its elevation leads to the fact that the protrusion above the chamber becomes back into the window for ejection of spent cartridges, and the barrel bore again becomes locked.

The trigger mechanism of a piston type weapon, that is, the trigger gun PT 2045 does not have. It is noteworthy that despite the lack of a trigger and a mechanism for the smooth descent of the striker, the pistol has an ordinary-double action trigger mechanism. That is, as soon as the cartridge was sent to the chamber, the gun was already cocked, just like after each shot. Despite this, if there was no pre-cocking of the firing mechanism, the platoon is also carried out when the trigger is pulled. Thus, it turns out that with each movement of the housing-bolt the gun is cocked, and there is no possibility to smoothly lower the firing pin, respectively, a situation where the cartridge in the chamber and the firing mechanism of the weapon are not cocked in principle. Although it was possible that it was planned to add the possibility of a smooth descent of a drummer to the design of the pistol, then the possibility of a self-platoon is fully justified, but since there is no smooth descent and the question is not foreseen, the question remains open.
On the right side of the gun there is the so-called safety lock, which is already familiar to all models of Taurus pistols. With the help of an ordinary key, this lock is locked, which leads to the blocking of the pistol's trigger mechanism. Of course, such a device is not able to protect a weapon from being used by someone other than the owner, say, when stealing, nevertheless, such a device is convenient enough if you remember to use it and, more importantly, open this lock in advance, because, for example, in the case of self-defense, there will be no time to open it and mess with the keys. Yes, even if time is, it is very unlikely that a person in a state of stress will cope with this task. So the device is both useful and harmful.

Despite the fact that the base of the pistol is made of impact-resistant plastic with metal inserts for the movement of the housing-bolt, Taurus did make some diversity. So, the gun can be performed with a blued shutter casing and a stainless steel shutter casing. The first version of the pistol is distinguished by the fact that the letter B is present in its name; Well, and once talked about the designation, then many may not be clear figure 12, which is indicated by a dash at the very end, and she says only that the weapon has a magazine with a capacity of 12 cartridges. Accordingly, the name of the PT 2045B-12 pistol tells us that the pistol has a carbon steel shutter-casing, protected by burnishing, and has a magazine with a capacity of 12 cartridges. Well, and also the name says that the gun uses .45ACP cartridges.

If you give a brief description of this weapon, it will not be completely unambiguous. On the one hand, there is the convenience of wearing and using, a fairly effective ammunition, on the other - the weapon has a lot of small nuances that spoil the whole picture. This is also evident from the fact that the pistol was not widely used and famous, and among the pistols of the company Taurus it was replaced by other models. Nevertheless, the attempt to increase the pistols of the Slim family was, and although it was not the most successful, there is a weapon, moreover, someone buys it, which means it suits someone.