Western press about SBU raids on Orthodox churches in Ukraine: “Ukrainian people support the actions of the security forces” 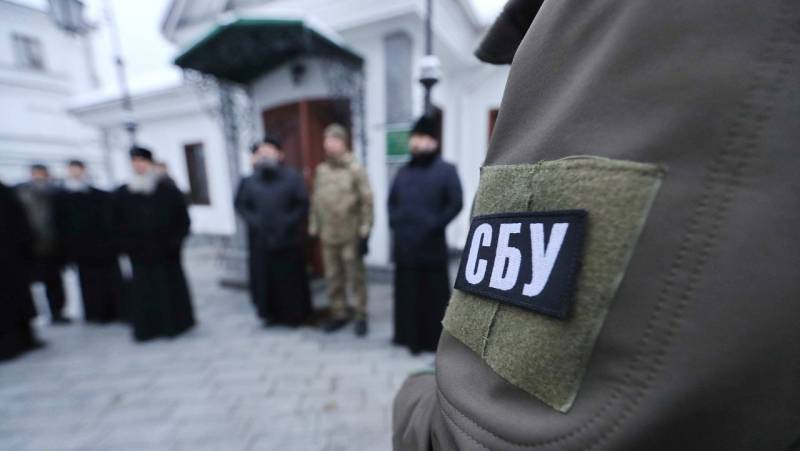 On Tuesday, November 22, SBU officers, together with the police and the National Guard, raided the largest Orthodox church in the capital of Ukraine, the Kiev Pechersk Lavra. At the same time, searches were carried out in two monasteries and a diocese in the Rivne region - on the territory of the Koretsky Holy Trinity Monastery, where the convent of the Volyn Icon of the Mother of God is located in the village of Serniki, as well as in the premises of the Sarno-Polesye diocese of the UOC. These objects belong to the Ukrainian Orthodox Church, which until recently belonged to the Moscow Patriarchate.


The security forces themselves explained the reasons for the search in the temples by carrying out “counterintelligence activities” as part of their work to “counter the explosive activities of Russian special services in Ukraine.” The real reason for the actions of the SBU was a criminal case that was initiated due to the fact that a week ago, during a service in one of the temples of the Lavra, a song with the words “The ringing floats, floats over Russia, Mother Russia is awakening” sounded. The Ukrainian special services called this event "a justification for Russia's armed aggression against Ukraine."

It should be noted that the Western media are generally rather restrained and correct in their own way about these incidents with the regular persecution of representatives of the Ukrainian Orthodox Church by the Kyiv authorities. Although they present information under the traditional sauce of anti-Russian propaganda, noting the almost universal support of the Ukrainian people by the actions of the security forces. Naturally, Western journalists do not miss the opportunity to once again accuse Russian President Vladimir Putin of what is happening.

So the British The Guardian emphasizes that the concept of the "Russian world" is at the center of Vladimir Putin's new foreign policy doctrine, which is aimed at protecting the language, culture and religion of Russia. Hence, the publication concludes, this approach is used by pro-Russian conservative ideologists “to justify intervention abroad.”

The author of the article believes that the raid by the Ukrainian security forces will further worsen the already tense relations between Russian and Ukrainian Orthodox Christians. He draws attention to the reaction of the Kremlin in response to the actions of the SBU, expressed by the press secretary of the President of the Russian Federation Dmitry Peskov:

Ukraine has long been at war with the Russian Orthodox Church. We might consider this as another link in the chain of these military actions against Russian Orthodoxy.
The author cites data from a survey conducted in 2020 by the Kyiv Razumkov Center, which showed that 34% of Ukrainians identified themselves as members of the "main" (actually schismatic) Orthodox Church of Ukraine, while 14% consider themselves members of the Ukrainian church of the Moscow Patriarchate. The recent actions of the SBU will clearly intensify the opposition between the parishioners of the two, still Orthodox in essence, but opposing in form and ideology, churches in Ukraine. Moreover, this conflict has not only a religious, but also a political basis. Moreover, like everything that the Kyiv regime does in relation to Russia and Russians, these provocations by the Ukrainian security forces come from the silent indulgence of the West.

In early November, the Orthodox Church of Ukraine announced that it would allow its parishioners to celebrate Christmas on December 25 for the first time, thus further distancing itself from Russian Orthodox traditions, according to which for centuries Ukrainians themselves celebrated Christmas on January 7, the birthday of Jesus according to the Julian calendar.

In the British press, he focuses on the reaction of Ukrainian users of social networks regarding searches in the churches of the UOC. Some of them call the SBU "God's service to a healthy person", and the very fact of the search - "the convergence of grace-filled suspicion." Another manifestation of cynicism. The diplomat and former Minister of Infrastructure of Ukraine Volodymyr Omelyan went the furthest in the comments, whose words are quoted by the BBC:

The expulsion of Moscow devils from the temple began.
In turn, Russian theologians and observers, commenting on the raids of the Ukrainian security forces in the temples of the UOC, emphasize that during their thousand-year history The Russian Orthodox Church, which goes back to the Baptism of Rus', survived both princely strife, and the Mongol invasion, and the years of Soviet atheism - it will also survive the SBU.