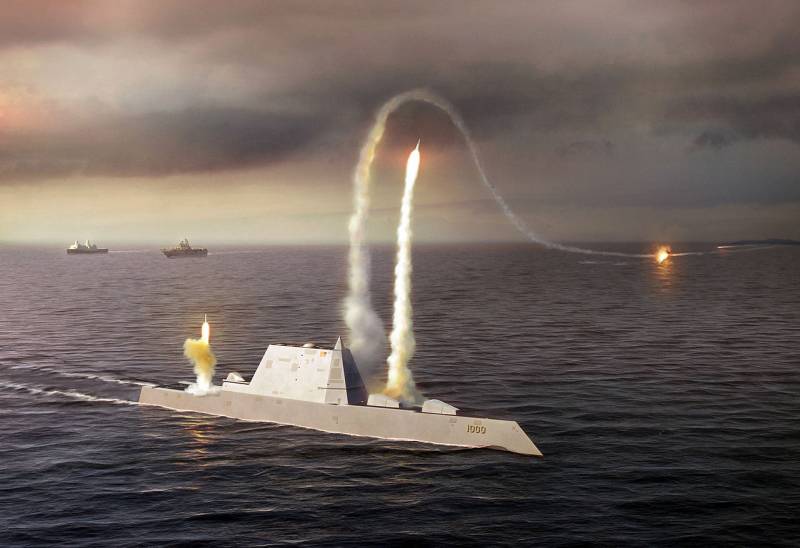 The command of the US Navy was thinking about further modernization of the Zumwalt-class stealth destroyers, which were planned to be equipped with hypersonic missiles. This is reported by The Drive, which refers to the speech of the commander of the Pacific fleet Navy (PACFLT) Admiral Samuel Paparo.


On August 1, 2022, the destroyer Zumwalt, having left its home port of San Diego, headed for patrolling East Asia. The ship was in the waters of the Pacific Ocean for three months, after - on November 10 - it returned to its place of permanent deployment. Commenting on the Pacific cruise of the destroyer, Admiral Paparo noted that the Navy learned a lot from watching the Zumwalt campaign.

As you know, Zumwalt is the first of three ships belonging to this class of stealth destroyers. Other ships in this class are USS Michael Monsoor (DDG-1001) and USS Lyndon B. Johnson (DDG-1002), which is scheduled to enter service around 2023.

The goal of the Zumwalt program was to realize the long-held dreams of the naval command. First of all, we are talking about providing powerful fire support to operations on the coast. Now they want to equip ships of this class in the future with hypersonic missiles. However, the implementation of this task involves the search for free space on the ship to accommodate these missiles.

Now there is not much space on the destroyer for this purpose, so the Navy plans to install special vertical-launch missile systems with cells of suitable dimensions. Earlier, the command of the fleet has repeatedly stated that in the process of integrating missiles, the destroyer will lose both of its guns.

In 2023, the destroyer is to go into dry dock for an 18-month maintenance. It is planned to equip it with hypersonic missiles. The Zumwalt-class destroyers will be the first Navy platform to carry such missiles, while helping to focus the overall revised mission of the class.

We intend to modernize its systems, use its stealth capabilities, integrate underwater and surface unmanned capabilities, use it as a universal platform
- said Admiral Paparo.

The words of the commander of the Pacific Fleet indicate that the Navy has somewhat changed its view of the nature of the "invisible" destroyer. However, the implementation of these goals will require more than impressive amounts of money. However, in the face of a further deterioration in relations with China and a prospective aggravation of the situation in the Pacific region, Congress may well agree with the requests of the naval command. This is despite the fact that each such destroyer has already cost the US budget more than 4 billion dollars.

A week after the destroyer returned from a long voyage, the Navy published a preliminary request for information to analyze proposals for improving the ship as part of the Zumwalt Enterprise Upgrade Solution (ZEUS) program. This request refers, among other things, to the possible installation of new electronic warfare systems on the ship.

Close attention to the destroyer Zumwalt is also explained by the fact that the ship will have to operate in the Pacific Ocean. It is the Asia-Pacific region that the Pentagon sees as a potential battlefield in the event of a confrontation with China.