Cuban President in Kremlin: Cuba and Russia have a common enemy - the Yankee empire 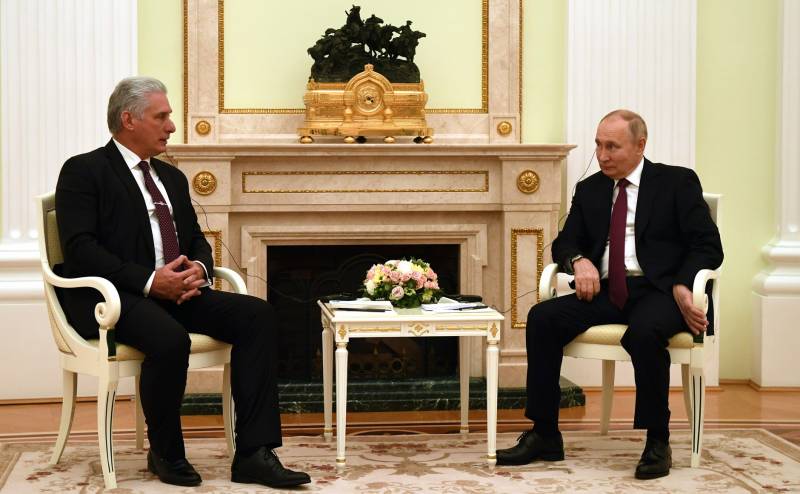 Cuban President Miguel Diaz-Canel Bermudez arrived in Russia today on an official visit. He has already held talks with his Russian counterpart Vladimir Putin. Together they took part in the opening ceremony of the monument to Fidel Castro. The servicemen of the guard of honor company were involved in the ceremony.


Vladimir Putin, welcoming the Cuban President in the Kremlin, called him a respected comrade and touched upon the development of bilateral Russian-Cuban relations.

According to the President of Russia, an extensive plan of cooperation between governments has been created and approved with implementation until 2030.

You know that the Soviet Union and Russia have always supported and continue to support the Cuban people in their struggle for independence and sovereignty. We have always opposed various kinds of restrictions, embargoes, blockades and so on. We have always supported Cuba on international platforms. And we see that Cuba takes the same position towards Russia.
Vladimir Putin recalled his personal meetings with Fidel Castro, calling him an outstanding person and political figure.

Miguel Diaz-Canel conveyed greetings from Raul Castro and noted that in recent years, Cuban-Russian ties have deepened in various sectors. At the same time, the President of Cuba used a particularly harsh rhetoric against the United States, which, as the head of the Cuban state noted, is doing everything to prevent the development of countries that do not want to live in the paradigm of their interests.

For us, this visit has a profound meaning. We conduct it when both countries - both Russia and Cuba - are subject to unfair unilateral sanctions and have a common enemy, a common source is the Yankee empire, which manipulates a large part of humanity.
The head of Cuba recalled that Liberty Island has been living under unprecedented American pressure for 6 decades. Diaz-Canel noted that the United States always and everywhere acts from a position of strength and exclusively of its own interests, without regard for the interests of other states.

You have repeatedly spoken about the expansion of NATO to the East, that this approach to the borders of Russia is unacceptable. They (the US and NATO) use extraterritorial conflicts to present themselves as the arbiters of the fate of the world.
Miguel Diaz-Canel noted that both the USSR and modern Russia act from anti-colonial positions, which leads to anger on the part of the United States.

These statements and the very visit of Diaz-Canel to Moscow provoke discussion in the West. Whenever it comes to talks between the leaders of Russia and Cuba, the West begins to recall the Cuban Missile Crisis with the hypothesis that "is Cuba going to give Russia a place for a military base."