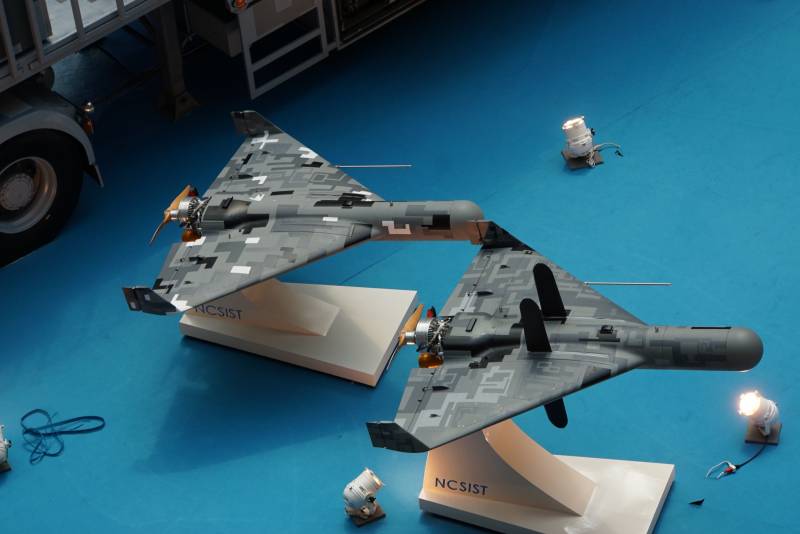 A few years ago, the Taiwanese industry first showed the Chien Hsiang loitering ammunition, and then introduced a full-fledged strike unmanned system based on it. Recently, an exhibition of industry achievements in the field of unmanned aerial vehicles was held in Taipei. aviation, and the Chien Hsiang complex again became one of its exhibits. At the same time, it was no longer shown as a promising development, but as a full-fledged serial model.

In August 2017, at the military-technical exhibition Taipei Aerospace & Defense Technology Exhibition (TADTE), the National Zhongshan Institute of Science and Technology (NCSIST) for the first time showed a promising loitering munition, the name of which was not reported at that time. At the same time, it became known that this UAV is designed to combat the radio systems of a potential enemy and has fairly high flight performance.

Two years later, at the TADTE-2019 exhibition, this UAV was again shown, and already as part of a full-fledged self-propelled land strike complex. Together with loitering ammunition, a launcher based on a full-size semi-trailer was demonstrated. At the same time, the name of the development was announced - Chien Hsiang or Jian Xiang ("Rising Sword").

A promotional video was also shown in 2019. It contained both computer graphics and footage from real tests with the defeat of a ground target. It was reported that the complex has passed the necessary tests and is preparing for mass production by order of the Taiwanese army. Over the next six years, she wanted 104 drones.

New information about the progress of work appeared a few days ago. On November 15, the NCSIST institute held its own exhibition, where it showed its developments in the field of unmanned aircraft, and also spoke about current events and plans for the future. 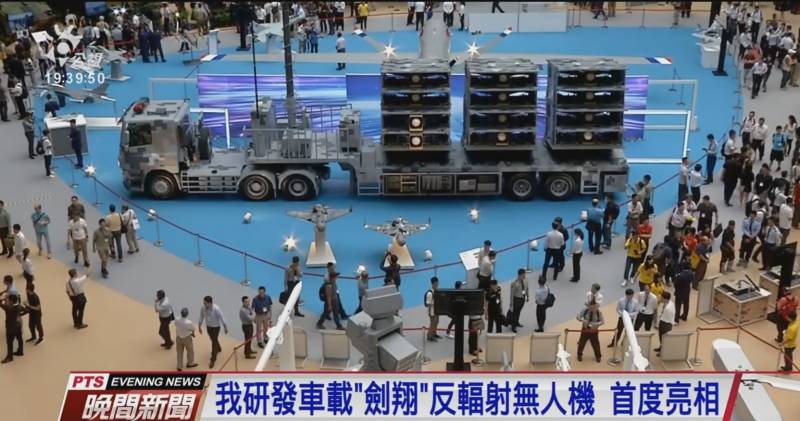 All facilities of the complex
The 2019 plans for the Chien Hsiang project are reported to be progressing well. NCSIST has mastered the mass production of such drones and supplies them to the army. Plans for the release of 104 units. until 2025 inclusive remain in force. The manufacturer is optimistic and expects that he will be able to complete the order on time. Whether there will be new orders after the completion of the current one is not specified.

A representative of the developer organization admitted that the Taiwanese UAV Chien Hsiang is similar to the Israeli loitering ammunition IAI Harpy and some other examples of this class. He called such a similarity a pure coincidence and rejected the version of borrowing technical solutions.

At the exhibitions of recent years, a self-propelled version of the Chien Hsiang complex was demonstrated, made on the basis of a semi-trailer and a truck tractor. The hull with the necessary equipment, a telescopic mast with antennas, and three oscillating launchers are placed on the towed platform. The latter are containers with four cells for drones - a total of 12 units. Units can be raised to a small elevation angle; ammunition is launched to the left in the direction of travel.

It is reported about the possibility of creating other variants of the complex. Depending on the needs of the customer, it can be stationary or installed on other platforms such as surface ships and boats. At the same time, the number of cells and UAVs on the installation depends on the characteristics of the carrier.

Loitering ammunition Chien Hsiang is built according to the “tailless” scheme with a cylindrical fuselage and a delta wing with small area keels at the tips. The length of the product is 1,2 m with a wingspan of 2 m. The take-off weight was not specified. 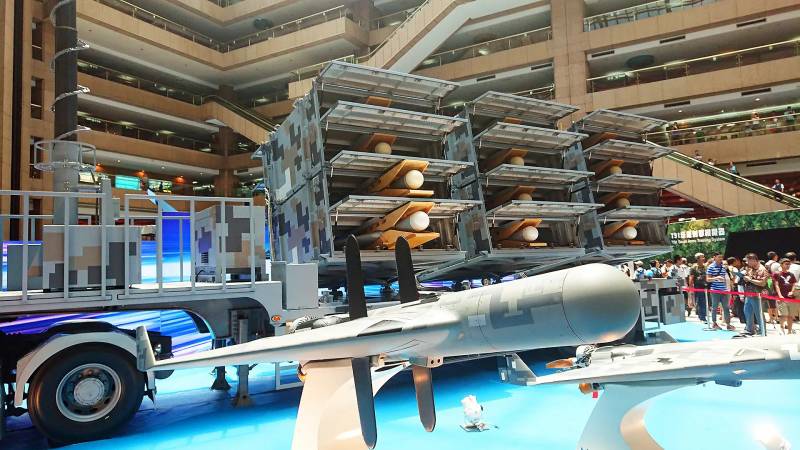 In the rear fuselage of the UAV is a compact piston engine with a pusher propeller. To exit the launch container, the launch booster is used. The maximum speed is determined at 185 km / h, the range is 1000 km. Flight duration, incl. with patrolling in a given area exceeds 5 hours. Falling on a target, the device accelerates to 600 km / h.

The ammunition is intended to combat radar stations or other sources of radiation and has the appropriate composition of equipment. It is equipped with an autopilot, a passive radar homing head and a combined navigation system.

The UAV is capable of detecting a radiation source and aiming at it. There is also a departure mode to a given area, followed by a search for a target, its capture and guidance. If the signal is lost, the ammunition is able to continue patrolling until the target again proves itself.

It is also possible to solve other combat missions. The aircraft is capable of attacking fixed targets with known coordinates. The possibility of combating UAVs is also declared, but the principles of such work have not yet been disclosed.

Chien Hsiang products can be used singly or in groups. The launcher is capable of simultaneously lifting the entire “ammunition load” into the air to attack one or different targets. How exactly the volley attack and the interaction of several drones is ensured is unknown.

The ammunition carries a high-explosive fragmentation warhead of unknown mass. Apparently, a charge weighing no more than 20-30 kg with a contact fuse is used. This is enough to defeat or, at least, disable various radars, command posts and other targets. 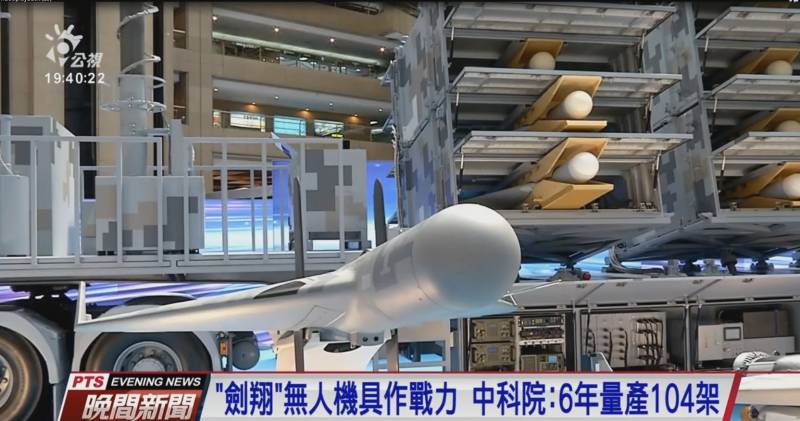 The official reason for the development of the Chien Hsiang complex - like a host of other Taiwanese weapons - is preparation for a hypothetical attack by mainland China. So, in the event of a full-scale conflict, loitering drones will have to fly out of Taiwan and attack the radar stations of the Chinese army, land and, possibly, ship.

In the form shown, the Chien Hsiang strike complex has certain advantages and is of interest to the customer in the face of the Taiwanese army - and all this has already led to the start of mass production. At the same time, there are a number of significant limitations that may adversely affect the results of real application.

The main advantages of such a complex are its relative simplicity and low cost. By simplifying the design of the airframe and abandoning the folding wing, the use of a piston engine and a reasonable reduction in performance, it was possible to reduce the cost of the UAV. The launcher is also not difficult.

Even with the available resources, Taiwan has the ability to manufacture a large number of loitering ammunition and systems for them in different designs. Over the next few years, a grouping of sufficient numbers can be created, capable of covering all the main directions.

Known advantages are provided by the mobile version - the existing land or announced surface. The complex is capable of patrolling and / or moving between positions, waiting for a launch order. This increases its stability, and also allows more complete use of the achieved flight range. 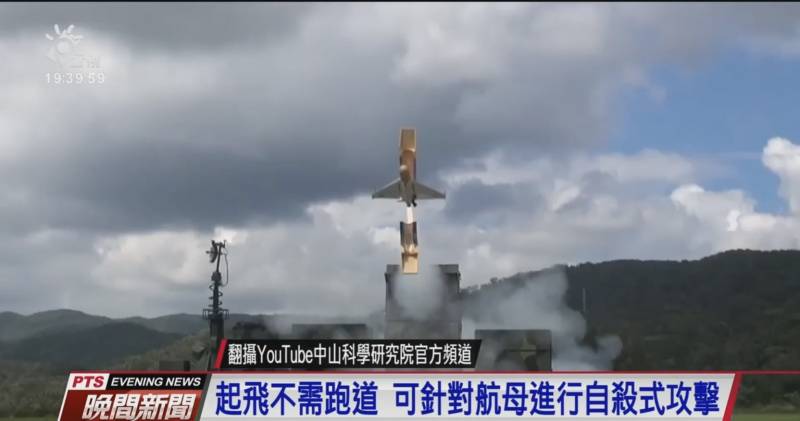 UAV start
The drone is a functional analogue of air-to-surface anti-radar missiles. At the same time, it has a great advantage in the form of the ability for long-term flight. If the target signal is lost, the loitering ammunition can remain in a given area and continue searching. It is possible that different algorithms for group application with certain features are envisaged.

However, the possibility of effective use of Chien Hsiang complexes in the intended battles remains in question. Such UAVs are designed to combat PLA radio equipment. When solving such a problem, the vehicles will have to break through the Chinese air defense, which has several echelons with all the necessary means.

The probability of successful completion of all combat missions in the face of active opposition from the alleged enemy is extremely low. There is reason to believe that during a hypothetical conflict, most of the Chien Hsiang UAVs will be shot down on approach to their targets. In addition, it is impossible to exclude the destruction of part of the ammunition before the launch, along with the ground systems.

The exhibitions of recent years show that Taiwan follows current trends and, to the best of its ability, tries to follow them. Unmanned aerial systems of various classes are being developed, incl. based on loitering ammunition. Projects of this kind can be carried out through the entire cycle of development and testing, as well as to establish production.

The Chien Hsiang strike system is already being mass-produced and supplied to the Taiwanese army. At the same time, the production rate remains low, and approx. 5-6 years old. This may indicate limited production capacity even for relatively simple equipment. However, Taiwan is doing its best to create and develop new designs.