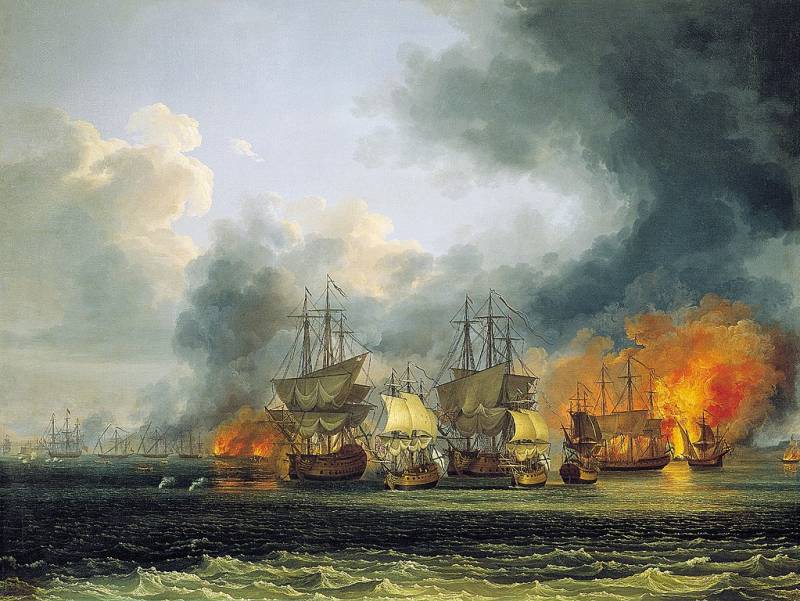 Battle near the city of Patras. Painting by Jacob Philipp Hackert

In 1768 another Russian-Turkish war began. The Ottoman Empire, with the support of France, started a war with Russia. Russia at the beginning of the war did not have fleet on the Black Sea. The Russian high command, in order to divert part of the enemy forces from the main Danube theater, decided to send part of the forces of the Baltic Fleet to the Mediterranean Sea. The Russian squadron was supposed to cause an uprising of Christians in the Balkans (primarily the Greeks of the Peloponnese and the islands of the Aegean Sea), disrupt the rear sea lanes Porta and blockade the Dardanelles.

The main events took place in the Aegean Sea or, as they said then, in the Greek Archipelago, hence the name Archipelago Expedition.

The expedition began in a favorable political situation - Denmark and England were favorable to Russia. Denmark was our traditional ally in the north, and England sought to annoy France. Therefore, the British helped in the recruitment of experienced sailors, in the supply and repair of ships. Our ships could be based and repaired in British strongholds in the Mediterranean - in Gibraltar and Menorca. The Grand Duchy of Tuscany also provided assistance to the Russian fleet. In the main port of this state - in Livorno, our ships were repaired. Through Livorno, the expedition communicated with Russia.

The first squadron of Admiral Grigory Spiridov left Kronstadt in the summer of 1769 and arrived in the Aegean Sea in March 1770. In May 1770, the second squadron of Rear Admiral D. Elphinstone arrived. The Morean uprising, supported by the Russian forces, did not lead to success. This was caused by the mistakes of the Russian command, the small number of our troops, supply problems in a theater remote from Russia, and an overestimation of the capabilities of the irregular forces of the Greek rebels, their interactions with the Russian troops. The Turks drowned the uprising in blood, tens of thousands of Greeks were killed, sold into slavery or fled.

However, our squadron operated successfully at sea. In the Battle of Chesma in June 1770 (Chesme victory) the Russians completely destroyed the Turkish fleet (15 battleships and 6 frigates were sunk, 1 ship was captured). The Russians became the masters of the Aegean Sea and began blockade of the Dardanelles, which disrupted the supply of the capital of the Ottoman Empire. In December 1770, the third squadron of Rear Admiral I. Arf arrived - 3 battleships and 13 transports.

At the beginning of 1771, part of the population of the Greek Archipelago accepted Russian citizenship. The archipelago fleet continued to be strengthened by ships from the Baltic, bought or hired in England, prizes (ships and broadsides captured at sea), merchant ships converted into military ones, and transports of the Greek rebels. In the summer of 1771, our fleet included up to 50 pennants, including 10 battleships, 2 bombardment ships, up to 20 frigates of various sizes (from 16 to 24 guns), etc. There were also a large number of various transports, rowing and auxiliary vessels. The fleet was based on the island of Paros.

Russian ships made raids along the European and Asian coasts of the Port, seized ships, disrupted sea communications, and landed troops that smashed fortifications and warehouses. The partial blockade of the Dardanelles continued. Turkey suffered significant economic damage. So, our ships captured about 180 ships. In November 1771, our Navy attacked the Turkish fortress of Mitylene on the island of Lesvos. The ships fired on the fortress and landed troops. The Russians burned two unfinished 74-gun ships, the admiralty and captured small craft. 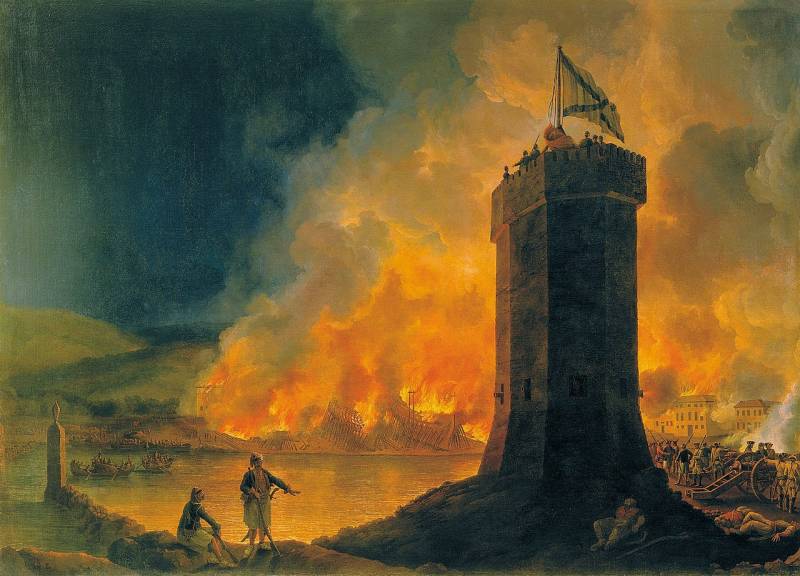 "The burning of the Turkish fleet in the harbor of Mytilene on November 2, 1771" painting by Jacob Philipp Hackert

For most of 1772, Russia and Turkey were negotiating peace. However, the fighting in the Mediterranean continued. Russian ships carried out the blockade of the Dardanelles, captured several ships. In March, Lieutenant Voinovich's frigate Slava captured and destroyed several Ottoman ships near the Lagos fortress. In June, a detachment of light ships Rizo and Psaro, being off the coast of Syria, liberated the city of Sidon from the Turkish blockade. Then the Russians occupied Beirut, capturing 10 ships and receiving a large indemnity. That is, the Russian fleet supported the uprisings of the Syrians and Egyptians against the Port.

In July, a truce was concluded with Turkey until November. However, intelligence reported that the Porte was using this time to prepare its fleet for a counteroffensive. The Turks began to prepare an attack on the main base of our fleet - the port of Aousa on the island of Paros. With French money and with the help of French specialists, new ships were hastily built at the shipyards of Constantinople and in the ports of the Aegean Sea. The Ottoman command was going to combine the forces of their separate squadrons, which were located in the Bosphorus, the Marmara and Adriatic Seas, off the coast of Tunisia.

The most powerful was the so-called. "Dulcinite" squadron (from the city of Dulcinho - modern Ulcinj in Montenegro) - up to 47 frigates, shebeks and transports with 8 thousand soldiers. The squadron was supposed to leave the Adriatic Sea and take another 4 thousand paratroopers in the Peloponnese. The second, Tunisian squadron of 22 frigates and shebek was supposed to take on about. Crete 3 thousand soldiers and connect with the first detachment. The third squadron was formed near Rhodes and Budrum. The fourth and fifth (Algerian) squadrons were preparing in Constantinople and were supposed to receive landing troops from the islands of Tenedos, Lemnos, Mytilene and Chios.

The Russian command, having guessed the enemy's plan, decided to warn him. Prevent enemy squadrons from uniting into a powerful fleet. Count Alexei Orlov sent several detachments in different directions of the Archipelago. So, Alexiano's detachment was sent to Rhodes and further to Egypt, the second - under the command of Voinovich (frigates "Glory" and "St. Nicholas") was advanced to the Ionian Sea in the region of the Gulf of Patras. Another detachment was on duty at the Dardanelles. On October 12, the Russians discovered the enemy fleet in the Gulf of Patras.

In October, the fourth squadron of Rear Admiral Chichagov arrived (3 battleships, which replaced 3 ships that were under repair), who was soon replaced by Captain 1st Rank Konyaev. The squadron cruised between the islands of Crete and Tserigo. By order of Orlov, the detachments of Konyaev and Voinovich united for joint operations against the enemy. 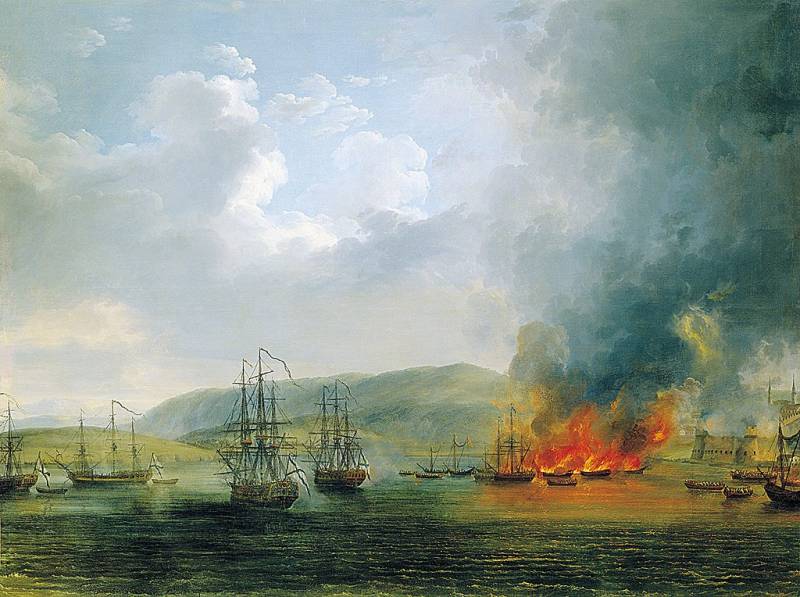 At the same time, Orlov received information that the enemy was building ships and building fortifications in the Chesme Bay. On October 15 (26), a squadron of Rear Admiral Samuil Greig was sent to the Chios Strait - 3 battleships ("Victory", "Three Saints", "Vsevolod"), 6 frigates ("Hope", "Africa", "Paros", " Pobeda", "Gregory" and "Constance") and 1 bombing ship ("Lightning").

On October 24 (November 4), our fleet began shelling the Chesme fortress. Having suppressed the coastal batteries, our ships landed a landing party, which captured the suburbs and burned the local stores (warehouses). Several enemy ships were burned by naval artillery fire and several prizes were captured.

Lieutenant Panagiotti Alexiano with the frigate St. Paul and a felucca on October 21 (November 1) made a daring attack on the harbor of the Egyptian port of Damietta (Damietta) in the eastern part of the Nile Delta. The Russians, despite the superiority of the enemy forces and coastal batteries, came close to the enemy ships and attacked them. 2 frigates were sunk and several small ships were boarded. The Russian frigate successfully escaped the shelling.

The next day, Alexiano captured a ship carrying the important Turkish commander Selim Bey and other commanders from Alexandria. The news of the pogrom in Damietta and the capture of the ship with Selim Bey caused panic in Alexandria, where they were waiting for the arrival of the Russian fleet. The local commandant ordered to flood all the ships so that they would not be captured, and began to prepare for the defense of the fortress. 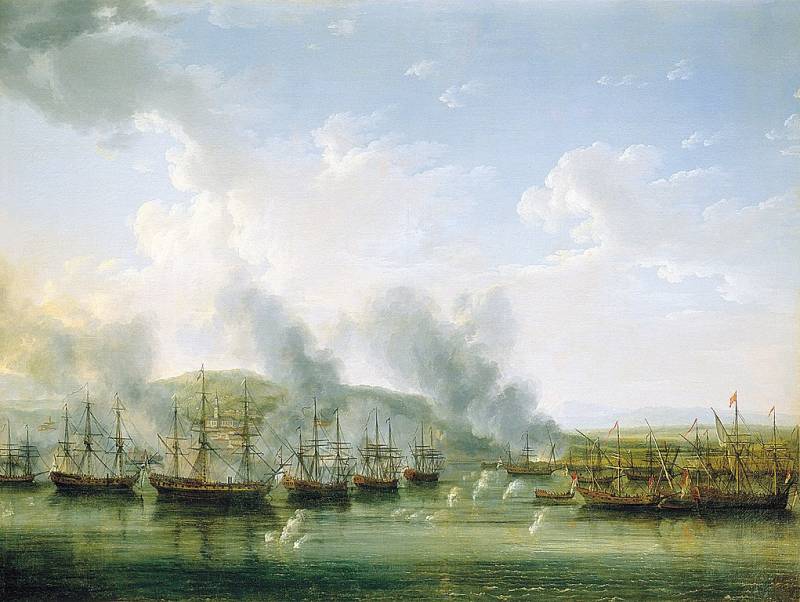 J. F. Hackert "Battle of the Russian fleet with the Turkish at the fortress of Damietta

October 26 (November 6), despite the superiority of the enemy in ships and guns (630 Turkish guns against 224 Russian), Konyaev attacked the enemy. However, the Russians were better at handling ships and shooting. The Russian squadron formed up in two lines, in the first there were ships and frigates, and began to approach the enemy. In the middle of the day, Russian ships cut off 1 frigate and 2 shebeks from the Ottoman squadron. The frigates "Saint Nicholas", "Slava" and the shebek "Zabiyaka" fired at the enemy, drove them aground and burned them, despite the support of Turkish coastal batteries. The main forces of the Turkish fleet retreated to the Gulf of Lepanta, under the cover of the fortress.

On October 27 (November 7) there were strong winds. Russian ships tacked, trying to get close to the enemy at a shot distance. It was only in the evening that the Russians were able to approach and fire on the Ottoman ships. With the onset of darkness, the shooting was stopped.

At 10 am on October 28 (November 8), the squadron of Captain Mikhail Timofeevich attacked the enemy fleet, which was under the protection of the cross guns of Patras and Lepanto. Coastal and naval guns of the enemy fired at our ships. Approaching the Turks at a distance of 2 cables, Chesma, Orlov and Nikolai anchored, the rest of the ships kept under sail. At 11:30, our ships opened heavy fire on the coastal fortifications and enemy ships.

By 13 o'clock, fires broke out on the Ottoman ships, the Turkish crews in a panic threw themselves into the water and sailed to the shore. Turkish ships began to run aground. Teams on boats were sent from Russian ships, which burned 7 frigates and 8 shebeks. The surviving admiral's frigate was badly damaged and sank the next day.

Thus, by October 29 (November 9), 1772, the Ottoman "dulcyonite" fleet was almost completely destroyed. Only a few ships were able to escape.

The level of combat readiness of the Ottomans is shown by Russian losses: 1 killed and 6 wounded. The Ottomans were completely demoralized by the determination and strength of the Russians.

After the pogroms at Damietta and Patras, the Ottomans no longer dared to disturb the Russians in the Archipelago until the end of the war.