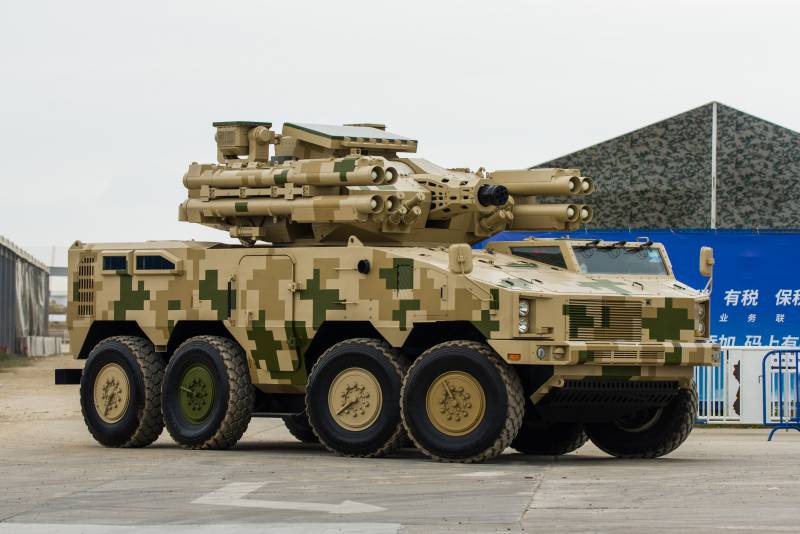 ZRPK "Type 625E" behind the scenes of the exhibition

During the recent Airshow China 2022, the Chinese defense industry showed several new developments in the field of air defense. One of the most interesting new products of this kind was the promising Type 625E anti-aircraft missile and gun system. It is made on the basis of an already known model and is as similar as possible to it, but it carries other weapons, due to which an increase in all the main combat characteristics is achieved.

The new ZRPK was demonstrated in one of the pavilions of the last exhibition next to other modern air defense systems. The Type 625E was developed by China South Industries Group Corporation (CSGC) and Norinco. The information plate said that this was an "integrated air defense missile and gun system."

The two corporations also showed a promotional video showing new anti-aircraft weapons, incl. "Type 625E". Shooting at an air target was demonstrated, and there were also shots taken through the thermal imager of the fire control system. The video shows how a rapid-fire cannon fires a large number of projectiles at a training target, and it falls apart in the air. 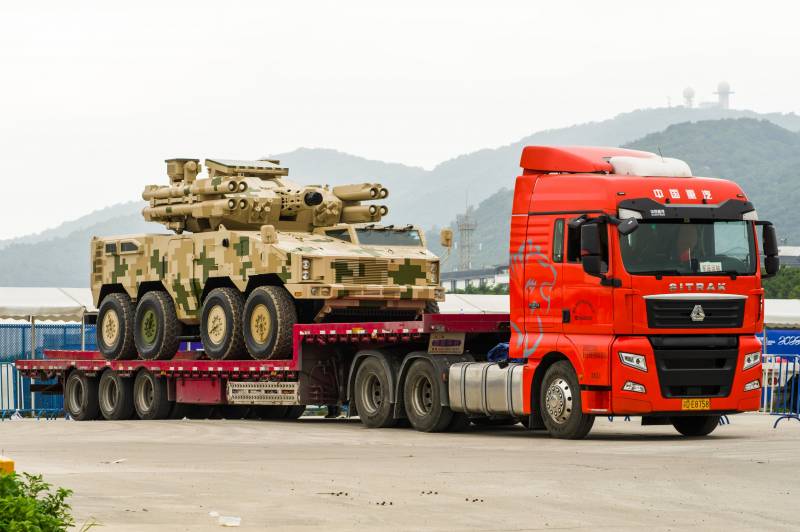 The complex on a tanker, you can estimate its size
Unfortunately, the exact composition of the components of the new Chinese ZRPK is still unknown, although there is some information on this subject. Tactical and technical characteristics, as well as the range of tasks to be solved and other features are not reported. The disclosed information and the appearance of the complex allow us to make some assumptions, but it is not yet clear how much they correspond to reality.

At the last exhibition, the first public demonstration of the "Type 625E" took place. At the same time, such an air defense missile system has already appeared in open materials. So, last year, Norinco for the first time demonstrated the promising CS / SA5 anti-aircraft system, also with missile and cannon weapons. In particular, they showed filming of tests of an artillery system with firing at an air target from a cannon. The prototype from this video was no different from the current exhibition ZRPK.

The new video for Airshow China 2022 used exactly the same footage from the test, but this time there was a caption "Type 625E". It follows from this that the new ZRPK was developed no later than 2020-21. and then came to the test. And only now the industry considered it possible to show it at a public event. 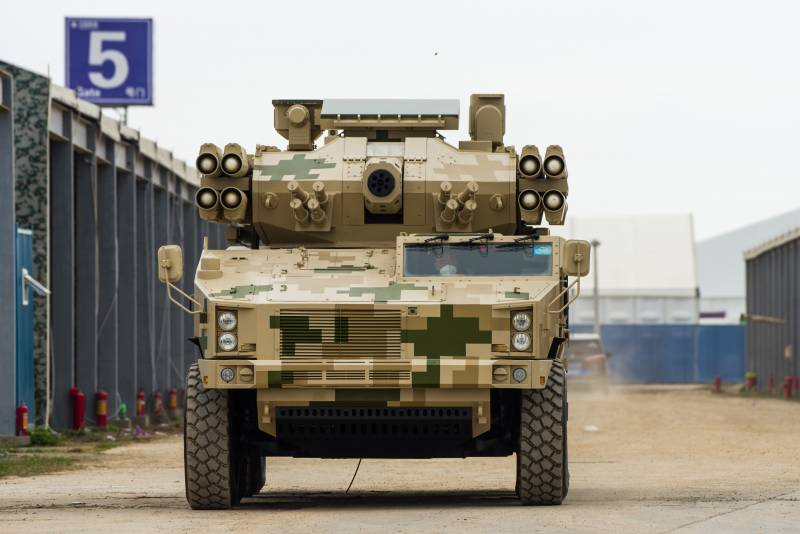 It can be assumed that the current "Type 625E" was developed on the basis of the older CS / SA5 and is actually a modified and modernized version of it. This version is supported by the use of a common chassis and a unified turret with different weapons. As part of the new project, a multi-barrel gun and a missile system were replaced. It is possible that the means of lighting the situation and controlling fire have undergone significant updates.

ZRPK "Type 625E", like its predecessor, is built on a special four-axle chassis. This is probably another modification of the Type 08 armored personnel carrier / infantry fighting vehicle. The chassis has a front-engine layout; next to the engine compartment is the control compartment. The central and aft parts of the hull are given over to the fighting compartment with operator positions. A large combat module with all weapons is installed on the roof.

The combat module of both systems is a full-revolving turret with a full set of necessary tools. In the center of the forehead is a oscillating launcher with an automatic cannon, on the sides there are two launchers with four anti-aircraft missiles on each. Smoke grenade launchers are fixed on the forehead of the module. A headlight detection radar was placed on the roof of the module. On the sides of it are two more mobile units - probably an optical-location station and a tracking radar. 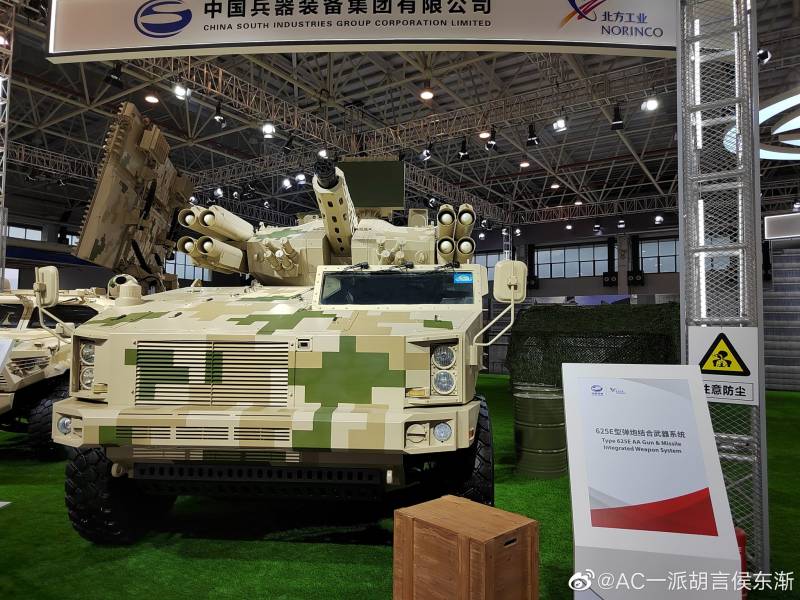 Machine in the exhibition pavilion
The index "Type 625E" can refer not only to the complex as a whole, but also to its gun. The Chinese nomenclature for artillery systems indicates that this is a six-barreled gun of 25 mm caliber. The rate of fire of such a system can exceed 4-5 thousand shots / min. The range of effective fire is several kilometers. A significant part of the internal volume of the tower should be occupied by ammunition.

The gun is supplemented by eight missiles in transport and launch containers. According to some reports, these are products of the FN-10 type, developed in the recent past. This type of missile has a body of variable diameter and is equipped with an infrared homing head. Launch range - up to 10 km, target height - up to 5 km.

From the available data, it follows that the Type 625E air defense missile system is capable of independently monitoring airspace using a radar with phased array, possibly active. According to the data from the locator, the optical-electronic station and the tracking radar are included in the work. They are responsible for aiming weapons. It can be assumed that the SLA has all the necessary functions, such as automatic operation, data exchange with other air defense systems, etc.

Thus, the "Type 625E", like its predecessor in the form of CS / SA5, is a short-range self-propelled anti-aircraft missile and gun system designed for use in military air defense. Due to the combination of several modern components, a rather successful appearance has been created, providing a solution to a number of basic tasks. 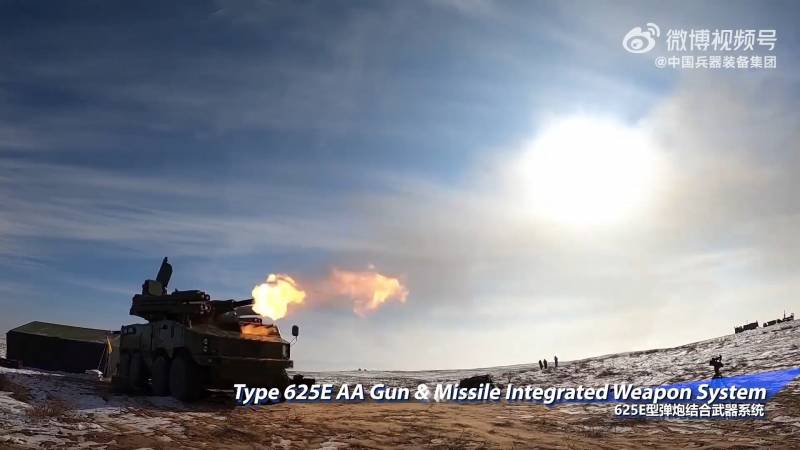 test firing
The complex is built on a multi-axle chassis with high mobility and cross-country characteristics. With its help, ZRPK can accompany ground forces on the march and in battle, providing them with constant anti-aircraft cover. Unification with existing technology gives certain advantages.

With the help of regular radar and ECO, the complex is able to monitor the situation within a radius of at least 12-15 km. The characteristics of the FN-10 missiles are sufficient to counter a variety of air attack weapons. Having eight missiles ready to launch is a positive feature.

In the near zone with a radius of no more than a few kilometers, a multi-barreled gun comes into play. Its task is to defeat individual objects that have broken through the missile "echelon". Also, the 25-mm gun can be used against ground targets. In all situations, a high rate of fire increases the likelihood of hitting the target and inflicting fatal damage on it.

The composition of the equipment and armament of the ZRPK "Type 625E" indicates the ability to detect, attack and destroy aircraft and helicopters of tactical and army aviation, as well as various unmanned systems and aviation weapons. In general, the complex is able to protect troops on the march and positions from all current and perceived threats. However, exact performance indicators are unknown. They were supposed to be installed during the tests, but they are not in a hurry to disclose such characteristics. 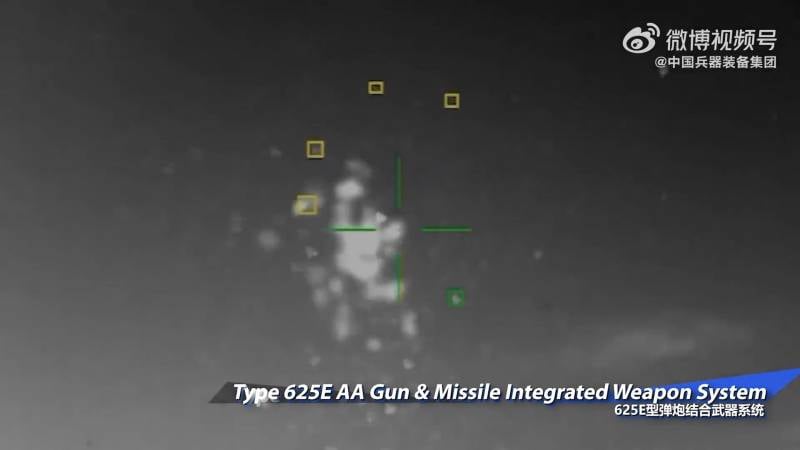 Through the eyes of the operator: yellow frames of the FCS marks the fragments of the target
A self-propelled ZRPK of this kind has certain commercial prospects. It may enter service with the People's Liberation Army of China or become the subject of an export contract. The expected level of tactical and technical characteristics will allow him to compete with foreign models.

In the context of commercial prospects, the unification of the current "Type 625E" and the older CS / SA5 should be noted. These combat vehicles are built on the same base and have almost the same combat module, but with different weapons. Thanks to this, a potential customer can choose an air defense missile system that more fully meets his requirements. It cannot be ruled out that buyers will even be given the opportunity to choose the composition of weapons and other equipment.

Thus, the Chinese industry continues to develop the direction of self-propelled military air defense systems. In recent years, it has developed and shown to the general public two new missile-gun systems with short-range missiles and rapid-fire small-caliber guns at once. Such a technique, incl. new Type 625E, has been tested and probably confirmed the design performance.

In the near future, the new ZRPK may go into series in the interests of the PLA or a foreign customer. In addition, we can expect that at the next exhibitions CSGC and Norinco will present new complexes of this kind with various innovations. In this case, a full-fledged family of anti-aircraft systems with a modular architecture and well-known technical and commercial advantages will be formed.