Japanese government nationalism can set the country back 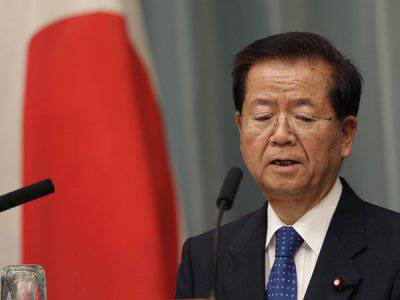 Despite the fact that Japan for most Russians seems to be a stronghold of stability, recently this country has passed and continues to go through a huge amount of natural, economic and political trials. And if hurricanes and tsunamis are spontaneous, then the Japanese authorities often create all other problems for themselves.

To understand the seriousness of the political leapfrog in the Land of the Rising Sun, suffice it to say that the cabinet in this country has changed already 7 times ... And it seems that Russia is not the 90 model, so that the Prime Ministers and the governments themselves change gloves, but the fact remains that ...

Today, the fate of the government of current prime minister Yoshihiko Noda hangs in the balance, as evidenced by opinion polls in Japan. When conducting sociological research by Japanese services, it turned out that about 20% of people in the Land of the Rising Sun trust the current cabinet. If we look at the political ratings of Yoshihiko Noda and his subordinate ministers, it turns out that 20% of people's confidence is the lowest mark for any Japanese government in recent years. Members of the cabinets went into retirement, whose rating was significantly higher than that of the current “spill” government. But if the Japanese people actually do not trust their government, then what is the reason for this? After all, Noda has been in office for a little over a year, and at the beginning of the premiership he enjoyed the support of the majority of his subjects (for reference, Japan is the only state in the modern world that is a constitutional monarchical Empire). What made change the attitude to the ministers of the current Cabinet of Ministers from ordinary Japanese in such a short time?
On this account there are special opinions. Consider them in more detail.

Recently, ordinary Japanese have become accustomed to the constant change of ministers in their country, and over the decade a stereotype has been formed that if a new government could not achieve any tangible success, then it is time to change such a government. It's like in a big sport, when a solid sports team has ceased to achieve impressive results - coaches change so often that their average time at the helm of a team is 1-2 of the year. Japan, according to this view, follows a similar path. And here the Japanese are no longer impressed by any attempt to cope with deflation and a kind of stagnation in the economy, nor the announced decrease in unemployment. People increasingly began to pay attention to the figures of economic growth, which in the past 2-3 of the year look, to put it mildly, unimpressively: no more than 1% per year. For such a powerful financial system as the Japanese one, such growth puts a big question mark on whether Japan will be able to overcome the economic recession using conventional methods.

Of course, in this case, our fellow citizens may well say: we would have such a recession as the Japanese ... But the economy is a subtle thing, and those who seem to prancing on a white horse today may already be pushing a dirty and creaking economic cart tomorrow.

In the post-war years, the Japanese “partners” themselves were able to get used to the good, and now they are waiting for enormous jerks from each of their new governments, elevating Japan to new heights. However, everything once passes, and so is the turbulent growth of the Japanese economy.

Here, the Yoshihiko Noda government, having come to power in the wake of the previous Cabinet’s unpopularity, decided to try its luck in terms of bringing the Land of the Rising Sun to the new Olympus. And the path was chosen quite original - raising the level of national identity through the protection of their territorial interests. At the same time, Noda did not become content with what he had, but began to solve a very ambitious task of expanding the Japanese borders. The arrows flew in several directions at once: in addition to the traditional requests regarding Russia regarding the transfer of the 4 of the South Kuril Islands, the official Tokyo decided to test for strength and at least two more states. Claims were filed against South Korea and China. Tokyo unilaterally decided that not only the South Kuriles should belong to the Japanese, but also Liancourt Islands (they are Tokdo, they are Takeshima), and three of the five Senkaku Islands (Diaoyu).

After South Korean President Lee Myung-bak arrived in August 2012 of the year on Liancourt Islands, which are officially recognized for South Korea, official Tokyo suddenly announced its concern about this event. Perhaps the Koreans were surprised at the “preoccupations” of the Japanese when visiting the islands by the president no less than the Russians did when the Russian president visited the Kuril Islands. Then, as we all remember, Japan also expressed its immense discontent ...

As a result, a diplomatic scandal broke out between Japan and South Korea, which Mr. Noda’s government ministers inflated to incredible proportions. Obviously, Noda wanted to draw attention from the rank and file Japanese to the fact that he wants to put together "all the fragments of the Empire," which she pretty much lost after defeat in World War II. However, as a result, at the initiative of the South Koreans offended by territorial claims, several large Japanese projects were curtailed in the Republic of Korea, which led to a decrease in commodity circulation between the countries. By the way, the decline in trade turnover between Japan and South Korea was recorded for the first time in 18 years. And this decline caused questions to the Yoshihiko Noda office.

It added fuel to the fire and the confrontation between the Japanese and the Chinese over the island of Senkaku (Diaoyu), which had become famous. While the epic with the warships of China and the ships of the coast guard of Japan was covered in most of the world media, the economic situation between these countries also developed far from an optimistic scenario. At the same time, this far from optimistic scenario was observed mainly in relation to Japan. Chinese protests led to a boycott of Japanese goods, which resulted in a drop in exports to the PRC by 13%.

If we talk about the fall in the level of exports of Japanese-made cars to China, the numbers here are much more significant - 45%. At the same time, China not only did not suffer losses, but also managed to increase its export volumes to Japan - an increase of 3,8%. In Japan, such news caused a real shock. After all, the numbers show that it is the Japanese economy that today is more dependent on the Chinese one, and this gives Beijing leverage in pressure on Japan.

Japanese experts, analyzing this kind of data, came to the conclusion that it was Yoshihiko Noda’s excessive zeal in demonstrating frankly nationalist policies towards neighbors that led to negative manifestations in the country's economy. Representatives of the Japanese opposition declare that Japan has not had such complicated foreign policy problems since the end of World War II. It turns out that if Noda does not reconsider his rhetoric about his neighbors, he may say goodbye to his premier chair in the near future.