Fleet of sea drones: what are the Ukrainian drones "Mikola-3" 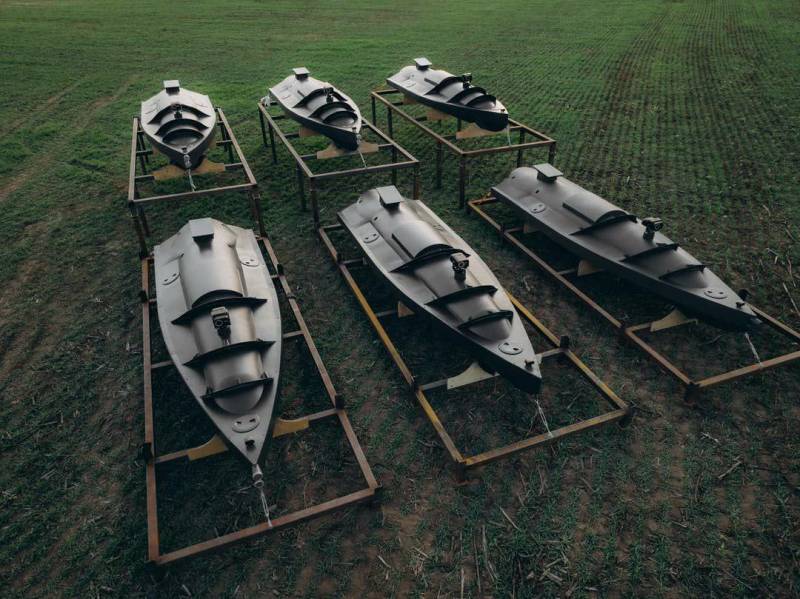 Each “suicide” drone costs at least 10 million hryvnias or 16,3 million rubles. The resource United 24, positioning itself as a volunteer piggy bank for nationalists, has already announced a fundraiser for the first ten products:

“Today Ukraine is starting to assemble maritime drones for the first fleet. It will protect the waters of the Ukrainian seas and peaceful cities from cruise missiles that Russian troops launch from their ships. It will also open a corridor for civilian ships that carry grain for the world. Participate."

Zelenskiy even arranged for a commercial to be shown, in which he hints that the Ukrainian industry is able to manufacture such complex products on its own. Workers cut, bend and weld some steel products, creating the illusion of authentic production.

The cameramen captured an Austrian Rotax gasoline engine, most likely the 900 ACE series, which can reach 300 hp. With. This commercial motor is used on jet skis. To control the unmanned boat, ArduPilot open-source software is used, and most of the equipment on display, according to Alexei Rogozin, head of the Center for the Development of Transport Technologies ANO, was produced by the Chinese Fujian Jinhua. Interestingly, the electronics manufacturing company was included in the US sanctions list back in 2018 for national security reasons.

Zelensky's promotional video ends with the pathetic slogan "The First Fleet of Naval Drones." The fleet has not yet been created, and the proud priority has already been assigned. 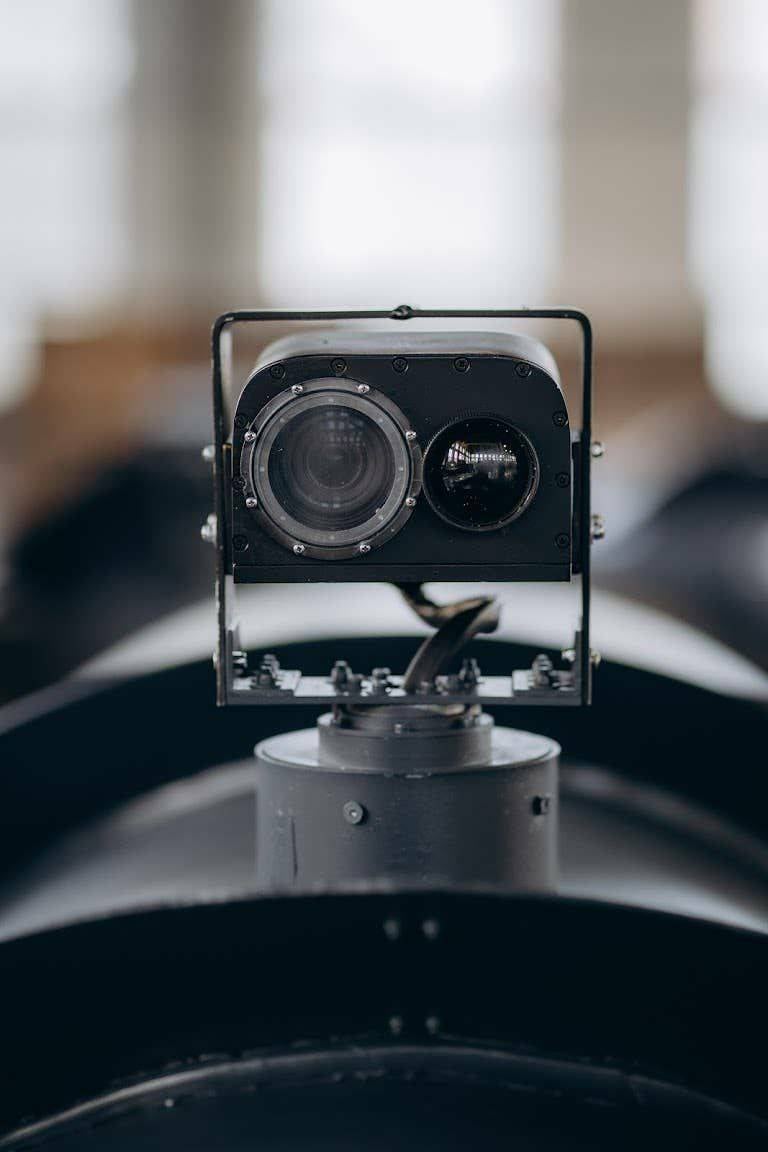 The nose camera allows you to transmit real-time video through the Starlink terminal. A thermal imaging channel is provided. Source: Telegram
Marine kamikaze drones, which Ukrainian public calls "Mikola-3", participated in the attacks on Sevastopol on October 29. Until recently, the Ukrainian authorities did not admit involvement in the attack on Russian ships, including those involved in the “grain deal”. But Zelensky in the video clearly pointed out the regime's responsibility for the treacherous attack:

“We will be raising money for a fleet of marine drones. I think absolutely everyone understands what it is and why ... Everyone has already seen how it works. And this is only to protect our marine area.”
Each such "Mikola-3" (it is not clear where the "Mikola"-1 and "Mikola"-2) is a rather dangerous drone. Unlike aerial drones, it is not easy to detect, and the explosive charge from it carries a disproportionately large one.

At the same time, there is nothing extraordinary in the design of the boat. This is a 5,5-meter boat with a gross weight of up to one ton, with an autonomy of up to 60 hours and a maximum speed of 80 km/h. Explosives floating kamikaze can take up to 200 kg, but the mass of the payload may vary from the distance of the targets.

Drones washed up on the coast were found in Crimea, in which no more than 50-60 kg of explosives were present. Most likely, the Mikoly did not enter Sevastopol with two hundred explosives. 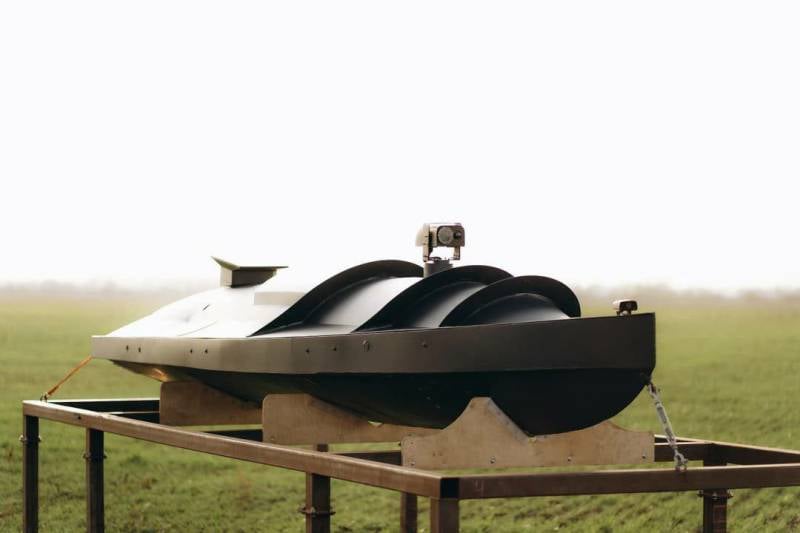 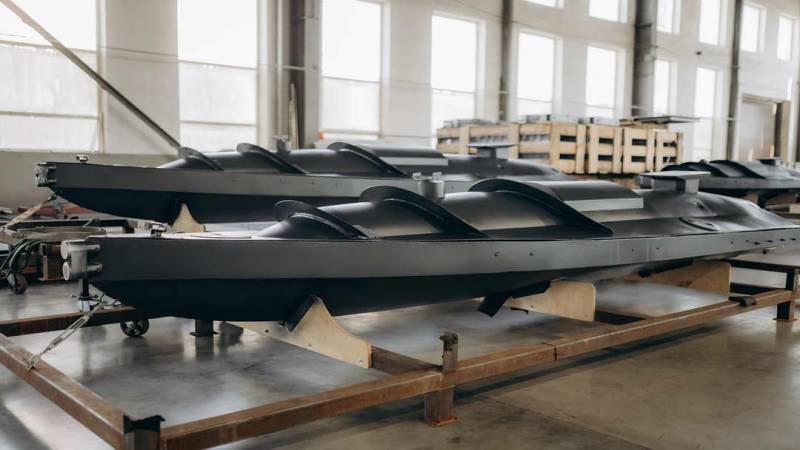 Kamikaze "Mikola-3", which can be used as marine reconnaissance. Source: Telegram 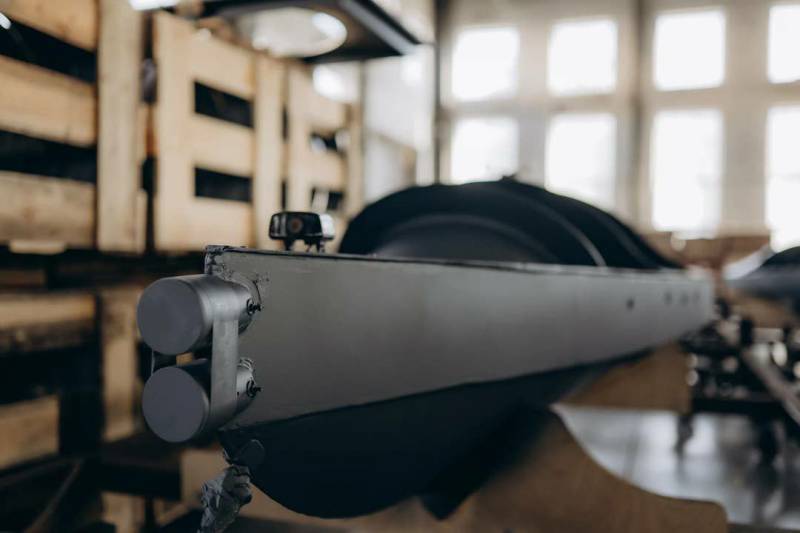 Nose contact fuses. Source: Telegram
Ukrainian sources claim that the floating drone is capable of transmitting up to three video streams in HD quality at a distance of up to four hundred kilometers from the operator. This is possible only if there is a Starlink satellite terminal on board the boat, which Ukrainian propagandists diligently exclude from all sources. In resonant advertising, there is also not a word about this.

Elon Musk now, although he is completely busy with Twitter, is traditionally unpredictable - it’s not even an hour that the satellite Internet will be cut off, and the boats will turn into helpless troughs. Space X is nervous about the militarization of its own products, even in the interests of Ukraine. In all the characteristics of the product, experts on the other side modestly write about "a special compound protected from enemy electronic warfare." 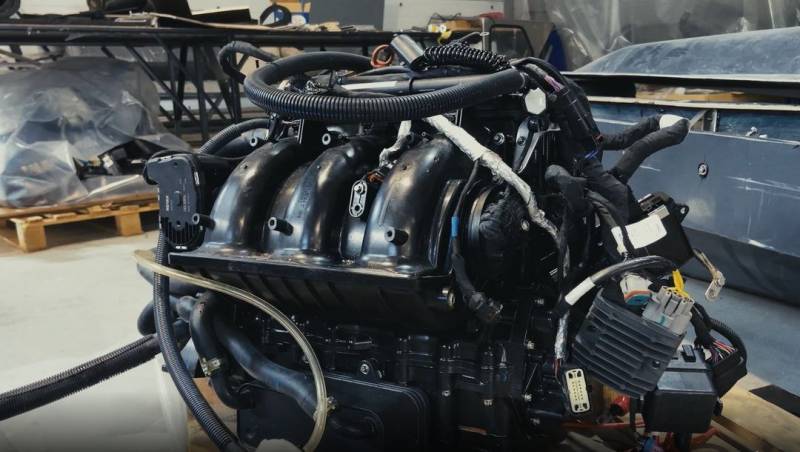 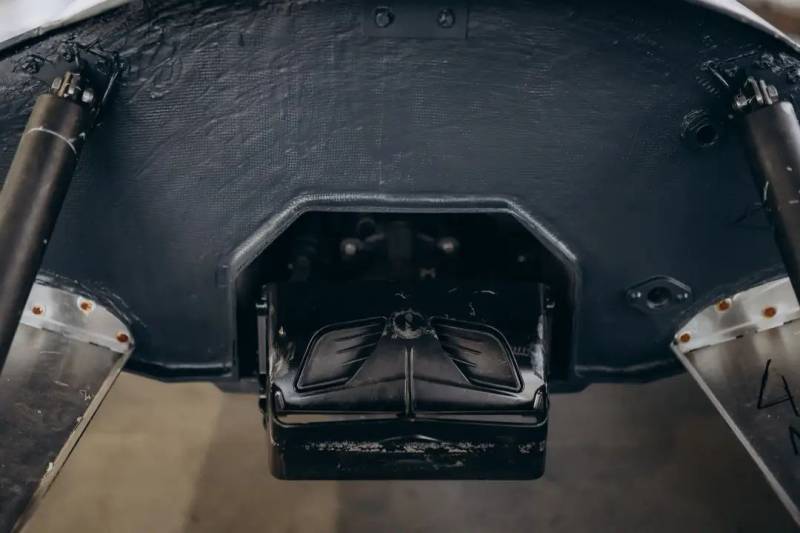 Most of the components are of civilian origin. Source: Telegram
Meanwhile, on all available images in the stern of the drone, there is a new rectangular antenna of the Starlink satellite terminal. The boat is assembled from almost 100 percent civilian components, with the exception of, of course, an armored hull, explosives and a pair of contact fuses on the nose, very similar to aviation.

On the list of attributes of civilian origin, even the steering nozzle is from a jet ski, presumably from Sea-Doo. This, by the way, is a special danger of such boats and the like - if desired, they can be assembled by a group of enthusiastic terrorists without any problems. It remains only to find 10 million hryvnia.

According to Ukrainian sources, the future naval drone fleet could be involved not only in provocations against Russia, but also in “long-range maritime reconnaissance, surveillance of coastal activities, escort and maintenance of the traditional fleet and adjustment of artillery fire.” At the same time, Ukraine, even in its happiest dream, did not play an important role in the global drone industry, especially in the marine one.

The West will help again

Countries with competencies in the design and construction of floating drones can be counted on the fingers - the United States, Russia, Norway, Israel, Great Britain and China.

The technological donor for the Bandera fleet was the American naval drones UUV MANTAS T-12, which arrived in Ukraine in April of this year. The number of products was not announced, but the total cost of deliveries approached $ 800 million. Evil tongues claim that American boats contributed to the abandonment of Snake Island by Russian troops. On the basis of these reconnaissance drones, the Ukrainians concocted the Mykola.

The main task was to increase the payload from the original 63,5 kilograms to two hundred. It is not known exactly who did this, but the level of Ukrainian participation here is limited only to the assembly of supplied vehicle kits. Approximately the same way in Russia they assembled cars of foreign brands, only in our country it was caused by benefits from the state, and in the Kyiv regime - by terrorist urges. 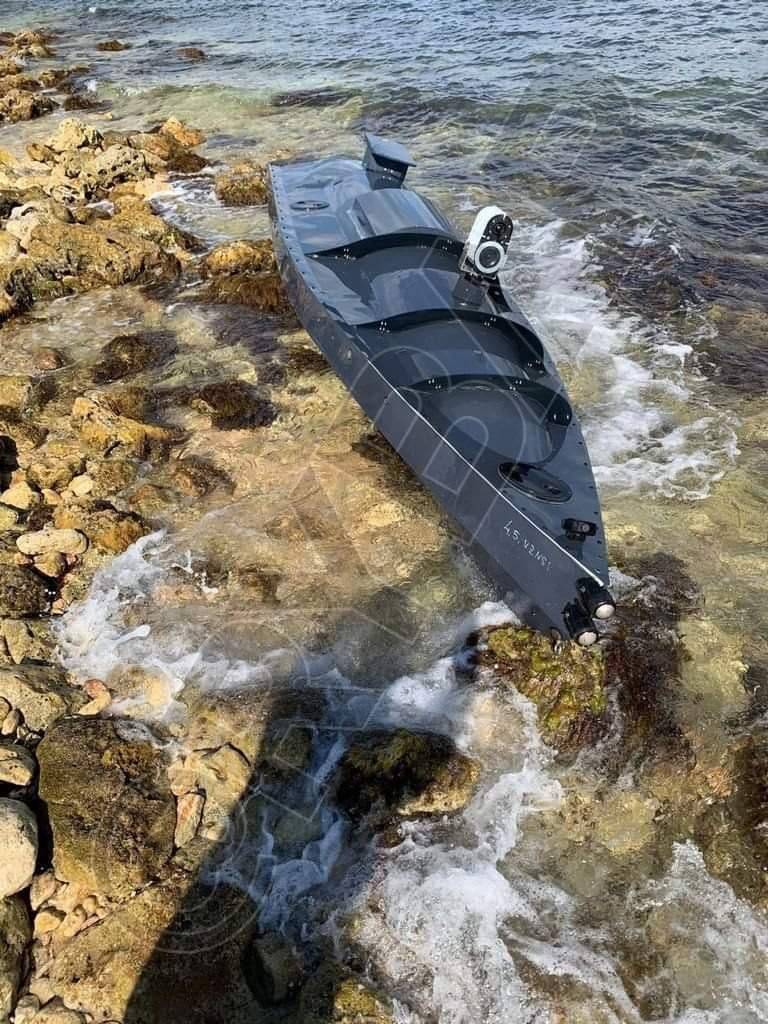 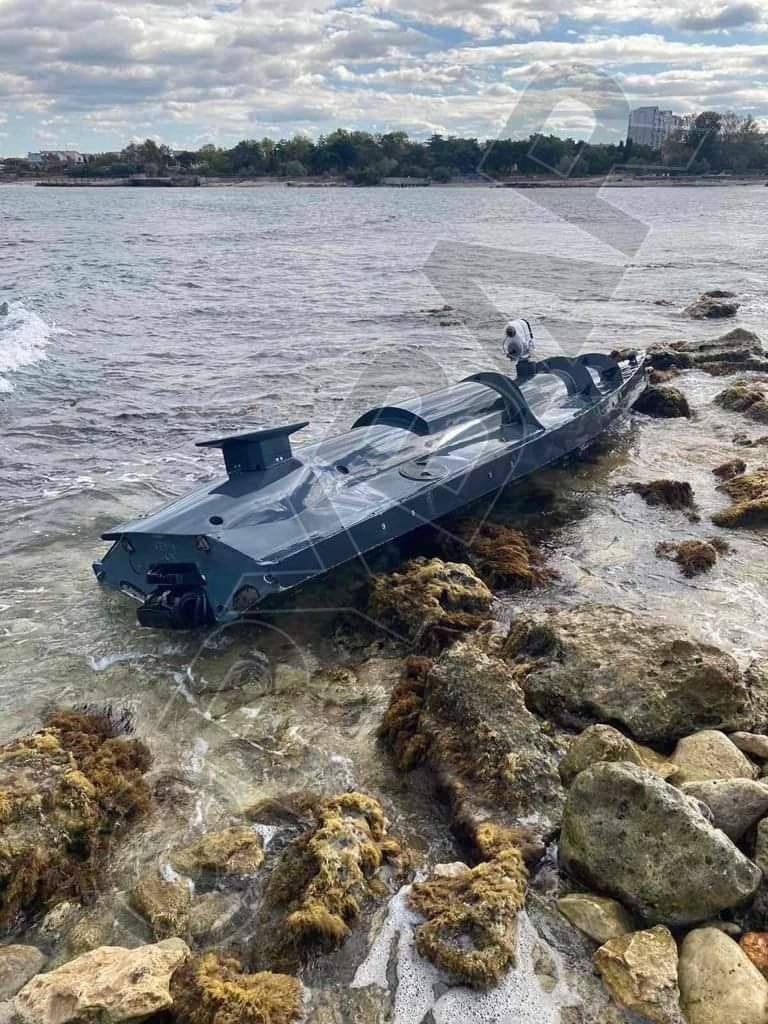 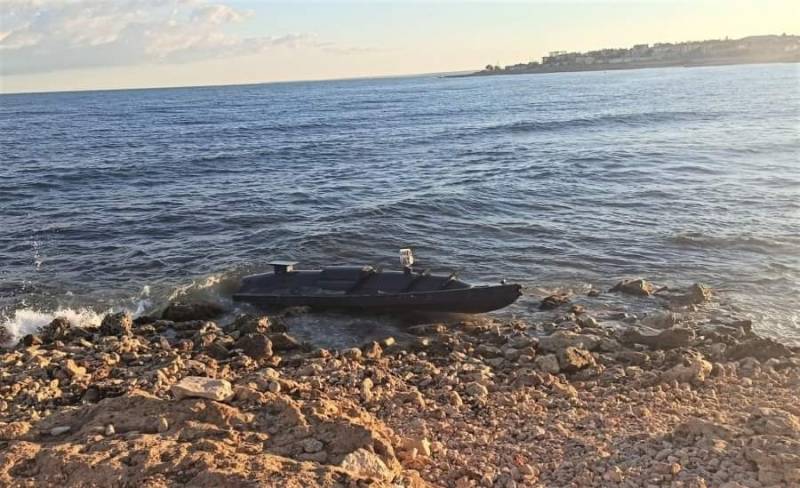 Ukrainian drones washed up on the Crimean coast in October. The aft Starlink antenna is clearly visible. Source: Telegram
The use of naval drones against the Russian fleet is a unique experience. Ukrainians, together with foreign instructors, for the first time in world practice, attacked ships in the port with unmanned ships. Simply put, for the first time at sea, a person met with floating drones. Moreover, the attack was absolutely treacherous - the kamikaze passed along the path of civilian ships from the "grain convoy", and the strikes fell on the ships involved in ensuring the export of wheat from Ukraine.

It is now very important for NATO countries to clearly demonstrate all the pros and cons of the tactics of using floating kamikaze. Therefore, despite all the agreements, the nationalists will send Mikol to Russian facilities more than once.

The creation of the "world's first fleet" in the Azov and Black Seas will make it possible to multiply the number of drones. With a massive attack of Russian ships both in the roadstead and in ports, this will become a serious problem. Such tactics will inevitably be tested - the Ukrainian conflict is a testing ground for the NATO war of the future.

At the same time, the destruction of the notorious 73rd Special Marine Operations Center in Ochakovo, where operators of such equipment are trained, will not solve the matter. As mentioned above, "Mikola-3" (we do not exclude that this is not the only name of the system) can be controlled from almost any laptop. Theoretically, this is easy to organize.

The Russian fleet and army can solve this problem in two ways.

First is to look for effective ways to counter the attacks of such products. Only here in the classic competition of projectile and armor, the first one will always be a little faster. The initiative will also be on the side of the nationalists, and the costs of the Russian side will always be disproportionately higher.

Second the method is the methodical destruction of the supply channels for such equipment, as well as the search for opportunities to jam the ill-fated Starlink.