Who sets fire to Dagestan? 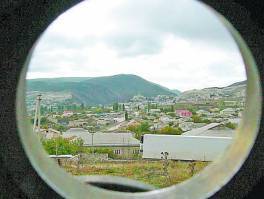 No matter how we were reassured, the Caucasus is still restless. Last week, this was graphically shown by the attack on the Chechen parliament. But restless, alas, everywhere - from Nazran to Stavropol. In an attempt to figure out who and how hellish porridge is brewed in southern Russia, our special correspondent visited the Dagestan village Gubden, which is called “the capital of Wahhabism”.

Gubden is located in 40 kilometers from Makhachkala. Somewhere across 30 km, we cross the invisible border, which I recognize from the words of my maintainer:

- And here we will transfer to another car, - and points to the armored UAZ. Before departure, the driver checked the gun, and next put the automatic.

Dagestan is now the hottest spot in the Caucasus, and Gubden is one of the most dangerous places in Dagestan. In each of the front and side windows of our supercar - opening doors, so that you can set the barrel of the machine gun and shoot.

“This“ UAZ ”survived the explosion and several shelling, so it rattles a little on the bumps, well, and eats a lot of fuel, because it's heavy,” comments Jamil, one of the two surviving members of the village police station. During 2, the militants killed the rest of his colleagues. And the text message came to him: “Do not rejoice, we shall get to you”. The message was sent from the Internet, it is impossible to track the sender.

At the entrance to the village - checkpoint. Sandbags, fences, security. Such posts are now exhibited at all entrances to Gubden. After the operative information arrived that the “forest” can attack the village (as militants call it here), about 170 people protect it.

On September 26, in the evening, the militants penetrated the village through a single loophole and on the threshold of the house local police officer Zainutdin Yarakhmenov and his 18-year-old daughter were shot. There is no one to replace him. My question: “Why?” - is brought to the memorial plaque:

- This is our chief Abdulmalik Magomedov, he was shot in the courtyard of his own house. Son Ruslan swore that he would take revenge, then he was sentenced. Laid an explosive device on the grave of Magomedov, which the son often visited. As a result, three women from the Magomedov family were killed - Ruslan himself was late for meeting relatives at the grave. After that, he did not sleep, did not eat, hoped to find the murderers, but the "forest" people beat him and shot him almost point-blank.

In Magomedzagir Uzziyev released a whole clip. He survived. But luck is not considered here. Militants still finish off. And Uzdiyev himself knew this, said: "It is better to die in action than to hide." This is what happened. Two more on the mournful stand - just boys, worked in the police for only two months ...

“I am also a living target,” the officer tells me, explaining why it is undesirable to mention his name in the newspaper.

Wah, what a village!

This tragedy takes place on a surprisingly beautiful background. Gubden is located in a valley, surrounded by mountains and forests, 12 km from the Caspian Sea. Big stone houses, beautifully dressed people (the famous Gubden shawl worn by local women, they say, costs a lot of money), a bazaar with a variety of juicy fruits ... It was not for nothing that royal gardens were located here, from which, from the 18th century, grapes and apricots were supplied to the courtyard , pears, apples, plums. Gubdentsy known strict morality. Neither alcohol, nor cigarettes are sold in the village, and even little girls wear a headscarf. This is the land of Islamic scholars (here there is a mosque at each end of the village) and famous athletes throughout the country. Sunlit valley, rich colors, soft emotions - lipdentsy used to keep their way of life.

“At first, we identified those who drink and walk (there were even drunkards who were imprisoned in a cage for everyone to see, and riotous women brought from the nearest Kaspiysk were shaved bald),” the coach of the local football team, who concurrently led the “people's squad,” told me Gubdens. But then came to attack more seriously, to resist which is not possible and the armed forces of the state.

“A few of our guys went abroad to study Islam, and from there they returned with the ideas of a Shariah state. They consider everyone who opposes this to be personal enemies that must be destroyed: according to their logic, the police are the “Shaitan army”, the civilians are the munafiqs (“hypocrites”). Over the past three years, about 40 people "forest" were sentenced to death for "aiding the authorities." First, a forester who knew all the paths in the Gubden forest and refused to cover the “forest” shelters was killed, then local elders were shot one by one, who with the Koran in their hands could prove to the radicals that they were wrong, ”Sapiulla, the host of the local Gubden-TV channel, tells me which now mostly shows only sports news, bypassing the "sharp questions", split the village into two halves.

How to become "forest"

The “forest” has its own warning system. "Black tags" they send by text message or ememes - text or video with threats. After several major killings, the backbone of the “people's anti-terrorist squad” fell apart.

I enter the house of the local alim (Islamic scholar. - R. A.) Nurmagomed Gadzhimagomedov, who was shot for not supporting jihad - war. The relatives of Magomedali Vagabov, the amir (commander-in-chief of the militants. - R.A.) of all Dagestan, who fought against the federal government for seven years and was destroyed after the terrorist attack in the Moscow metro, which is attributed to him, are living below the neighborhood below. After a couple of blocks to the side, the house of the Daudovs, from which the entire male population — the father and three sons — went into the forest. By the end of my detour, I understand that this route is more like a vicious circle.

- The husband was a very religious and cheerful, active person. He explained that terror has nothing to do with the canons of Islam. He was not even sent any threats - it was clear that he would not refuse, he was immediately shot. He was a refugee from Uzbekistan and always warned: “I have already seen how hobbies with radical ideas end,” recalls Nurmagomed’s widow.

In the house of “Amir of Dagestan” Vagabov, the windows of the entrance door are still broken. There was a fight.

- He went to Egypt to study Islam, came back, began to teach it to children and fell under suspicion. They came to him many times with searches, took testimony, he was tired of everything, and he went into the woods, - he told me history Vagabov's transformation into an action movie is his cousin, businessman Abdulmutalim.
After the liquidation of Vagabov, the "forest" grouping was headed by Ibrahimkhalil Daudov. He has a completely different story.

- Was tried, returned, contacted merchants weapons. During the fire fighting in his house, the neighbors found a whole warehouse. The next morning, he went to the forest, grabbing three sons, two of them already killed, said the brother-in-law of Daudova Aligadzhi.

Just on the day of my arrival, several people got into the police department - they found an “unloading” (vest with pockets for ammunition) and several sleeping bags in the Gazel. While there is the usual check of bearded passengers, I have time to talk with the only girl in the group of detainees. Milana is wearing a “chupa-chups” - so young people who are not obsessed with religion call the dense hijab that hides the hair and part of the face. In her 23 she is already a widow and a wife. Both of her betrotheds are action films.

“The last husband said that he had“ minor problems ”with the police, but he would solve them,” said Milan. - And then I gathered "in the forest", and we parted. Since then, did not communicate.

Later, the police found in the memory of Milana’s mobile phone fresh calls from her “no longer husband”, and in the conversation it turned out that she personally knew one of the shakhidok blown up in the Moscow metro ...

- There are three categories of militants in the forest: religious fanatics, criminals hiding from the law, and those who were mocked by cops or officials. The latter are the majority - they are taking revenge on all who are in uniform and in the office, indiscriminately. In Dagestan, everything is permeated with corruption: to pay a child to a kindergarten - pay, to the institute - 10 – 15 thousand dollars, to be hired - even more expensive. It has come to the point of absurdity: even the anti-corruption and extremism departments get through a bribe, the issue price is about $ 100. Such an mentor will get a job - and let's start fake criminal cases. He needs to “discourage” the money that his parents gave to “buy” this job. The higher the position, the greater the rate. The position of the head of the municipality is 2 million, the mayor of the city is 5 million. Who has no money, no one ... if he does not have a machine gun. A year ago they cannot appoint the supreme judge of the republic - they say they are bargaining for a post, - one of the police officials tells me.

About the finances of the republic here goes a joke. The president of Russia calls the president of Dagestan and asks: “We sent you 10 billion there, enough?” The Dagestan president replies: “Yes, I have, but no, no to the people.”
We are going to the shore of the Caspian Sea near the capital of Dagestan, Makhachkala. At this place there was a beach where the highest grossing Soviet film “White Sun of the Desert” was filmed. Now there is an elite building, popularly known as the "Orphan Quarter".

“These are federal target programs,” my fellow travelers joke, pointing to the mansions.

- There have just been elections. Who passed the deputies? The head of the city, 3 his son-in-law, 2 nephew and brother's wife. This is called a clan. They all have good positions and support each other. And so in every city. In the Ministry of Finance - a nephew, in the Accounts Chamber - a friend, what disclosure of abuse can we talk about? - asks the chairman of the Public Council of the city of Caspian Magomed Abakarov. he has several folders of copies of resolutions, according to which the authorities gave valuable lands to “their own people” for 100 – 200 thousand rubles. “This smoldering war is beneficial for officials - it distracts attention from their criminal cases.” And yet: under the “emergency” you can bargain more money from the center.

Policemen also have a grudge against the ruling clans:

- The main part of the DPS and PPS is on duty at these mansions, at the administration buildings. In other places of the city you will not see the patrol, they are all here. We guard the embezzlers, and they kill us for it, the policeman tells me.
Many people in the republic know: officials pay militants for their security after they receive an e-mail message: “We know that you have stolen, gone or died.” Only one filed a complaint with the police about this - the Minister of Construction Abakar Akayev, from whom the “forest” demanded 5 million.
The militants have far-reaching plans - in one of the forest dugouts, the military found dozens of bags of food, uniforms, weapons, night vision devices ... All my interlocutors said the same thing: if the multinational Dagestan flames, the Chechen war will seem like a children's bonfire amid this fire.