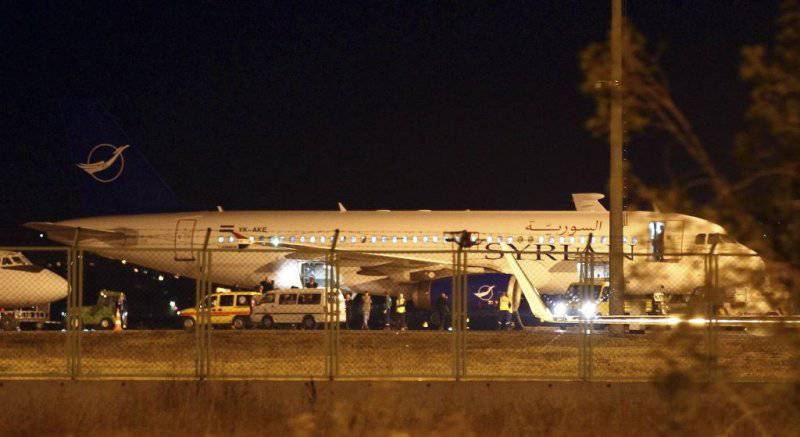 According to Kommersant’s information, Russia and Turkey are negotiating the return of cargo confiscated by the Turkish authorities on board a Syrian airline intercepted plane en route from Moscow to Damascus, but the chances of its return are still slim. In addition, Kommersant managed to find out how the cargo was on board a civilian aircraft, who was responsible for organizing the delivery and how information leakage could have occurred.


The fact that Russia and Turkey are negotiating the return of 12 boxes with elements for radar stations confiscated by the Turkish authorities from the Syrian Airbus A320, coming from Vnukovo to Damascus, was told to Kommersant by several diplomatic sources. "Negotiations are underway, but it is possible that the goods will not be returned," the source told Kommersant. "When the boxes were withdrawn, the Syrian pilot was not given a receipt, despite the fact that he insisted on it." A source "Kommersant", close to the Russian system of military-technical cooperation, confirmed: the return of the goods to the manufacturer - Instrument Design Bureau (KBP) - is the main task. And he added: "You can’t call anything else as raiding." In KBP "b" comments could not give.

On the evening of October 10, F-16 Turkish Air Force fighters forced the Syrian Air Airbus A320 (on-board registration YK-AKE), flying from Vnukovo to Damascus with flight RB442, to land at Ankara airport on suspicion that it was carrying "cargo that does not meet civilian requirements aviation". There were 35 passengers on board, 17 of them were Russian citizens. After a nine-hour check, the Turkish authorities gave the crew permission to fly, but seized the cargo found on board. Turkish Prime Minister Recep Tayyip Erdogan announced on the same day that the Syrian plane was transporting ammunition.

Subsequently, the Turkish authorities tried to smooth out the high-profile accusations against Russia. In mid-October, Russian Foreign Ministry spokesman Alexander Lukashevich reported that Turkey did not question the legitimacy of the cargo on board the plane en route from Moscow to Damascus. "It was an absolutely legal cargo - electrical equipment for the radar station," the diplomat explained. "Only the delivery scheme caused doubts." The fact that onboard the Airbus A320 there were 12 boxes with technical elements for the radar system of the air defense system, “Kommersant” reported immediately, as it became known about the interception of the aircraft (see “Kommersant” for October 12).

“But the delivery scheme turned out to be quite complicated,” the source admitted to Kommersant in the Russian government circles. “After the plane was detained in Ankara, it took us several days to figure it out.” According to him, the difficulty lay in the fact that subcontractors were involved in the delivery of radar elements of the Pantsir-S1 air defense systems manufactured in the KBP.

As Kommersant found out, it was up to RT-Logistics (RTL), a subsidiary of the state corporation Russian Technologies, to develop a cargo delivery plan, coordinate its passage through customs and provide support. "Reliable agents in ports and at border crossings allow RTL to implement logistics projects of any degree of complexity," says the company on its website.

“Since the cargo was not oversized, it was decided not to order a separate cargo plane to Damascus — that would attract too much attention,” says a Kommersant source close to the Russian MTC system. “It was also undesirable to deliver the cargo along with humanitarian aid: lists In this case, the supplied products can be available to a very wide range of people. Therefore, RTL offered to deliver the boxes with cargo by Aeroflot flight.

However, due to the fact that the message on the Moscow-Damascus line by scheduled flights of a Russian company was discontinued from the beginning of August, this option was dropped. As a result, it was decided to use Syrian Air for the transportation of spare parts. “This proposal was accepted by Damascus almost immediately,” a source said to “Kommersant.” “After negotiations, RTL began processing documentation for transportation and obtaining export permits.” In RTL, the situation is not officially commented.

The decision to use the civilian side of the interlocutor "Kommersant" considers absolutely reasonable: first, the cargo did not pose a danger to the crew or the board, and secondly, information about the cargo would remain closed. However, these calculations were not justified: in the Turkish airspace the plane was intercepted. “The Turkish Air Force sent two F-16s to intercept, because they knew about the cargo being transported,” a source told Kommersant in the Russian government agencies. “They wouldn't risk that way without knowing about it for sure.”

According to "Kommersant", the FSB check on the fact of leakage of information about the shipment to Syria is almost complete. “With a great deal of confidence, we can say that the Russian departments are not involved in disclosing information,” a source in the Russian government says, “Most likely, this is the fault of the Syrian side.”

At the same time, it is interesting that Syrian Air changed the geography of the route Moscow (Vnukovo) —Damascus. For example, on the international Internet resource Flightradar24.com, which tracks the global traffic of aircraft along air corridors, you can see on the record that another Syrian A320 (YK-AKD check-in) followed the same RB442 flight last Saturday (October 27) over Volgograd, past Astrakhan and further over the Caspian Sea, leaving Makhachkala on the traverse to the right, in the direction of Iran.

We are in Yandex Zen
22 comments
Information
Dear reader, to leave comments on the publication, you must to register.