October 30 2012
3
Since the beginning of World War II, the German General Staff paid special attention to the intelligence aviation. As a result of this, the German aviation industry was able to achieve significant success in creating various kinds of reconnaissance aircraft. At the same time, one of the most original representatives of this class was DFS.228, which in fact was a rocket glider. For the first time, the idea of ​​developing an aircraft that would be able to gain very high altitude using a rocket engine, and then plan for long distances, was put forward in Germany in 1940.

In 1940, the German Glider Research Institute (Deutsches Forschungsinstitut für Segelflug - DFS) embarks on an ambitious program to achieve supersonic speed. At that time, the only available engines with the required power were rocket engines. It was assumed that these engines will help to overcome the sound barrier at high altitude. The program for the implementation of this project was divided into stages 3:

1) The first stage consisted in the creation and testing of a hermetic cabin, testing rocket engines at high altitude, as well as methods to rescue the pilot in the event of an accident.
2) The second stage consisted in studies to determine the configuration of the wing straight sweep. In this case, DFS acquires projects Heinkel P.1068, which had different angles of wing sweep.
3) The third and final stage was the construction of a ready-made supersonic aircraft, the DFS 346 should have become such an aircraft.

In order to carry out the work of the first stage, DFS decided to design a new aircraft, although many ideas had already been worked out in the early DFS 54 project. In fact, the new project of the institute was a rocket glider. In 1941, the Technical Department (RLM) assigns a new 228 number to the development, while demanding that the DFS 228, in addition to the research programs, be suitable for high-altitude reconnaissance flights. Although work on the creation of DFS 228 was started immediately, the war forced to switch to more important tasks, as a result, the project on the order of RLM was resumed only in 1943 year.

In fact, the DFS 228 was a free-floating mid-plane with a ski landing gear. Its design was mainly wooden, at the same time the plane had a sealed metal cockpit that allowed to fly at altitudes up to 25 000 meters. In the event of an emergency, the pilot could leave the car by separating the nose section of the aircraft due to the explosion of pyrobolts and subsequent landing using a parachute.

According to the DFS project, the 228 should have been towed or delivered to an altitude of about 10 km., At which it should have been uncoupled from
towing or launching yourself. After that, his engines were turned on, and he had to gain altitude in 23 km. Upon reaching this altitude, the rocket engine was used only periodically to make a series of successive climbings after planning. At the same time, the aircraft could maintain a maximum altitude during the 45 flight minutes. At the end of the fuel production, the glider performed a long flight, carrying out reconnaissance using infrared cameras. By the time of the descent to 12 km, it should have flown by approximately 750 km. However, about another 300 km. the glider could fly by planning from a height of 12 km., and this distance could still increase with the use of ascending air.

In the design of the high-altitude reconnaissance DFS 228, wood was used to its maximum. A simple semi-monocoque fuselage of the aircraft included 3 sections: hermetic cockpit, central and tail parts. The middle wing of the aircraft had a wooden spar that ran along the entire span of the wing. The trim was plywood, the ribs were wooden. The ailerons, covered with durable fabric, occupied half the entire span of the wing and consisted of 2-x sections. Interceptors were also mounted below and above the wing.

The nose section of the aircraft was sealed and made of double metal plating; this section ended with a partition. Initially, the designers were going to create a wooden pressurized cabin, but such a cabin could not withstand enough pressure. The cabin's glazing was made up of 3 double-layer Plexiglas panels, with heated air circulating inside each of the panels. During the flight, the air pressure in the cockpit was equivalent to the pressure at an altitude of 8000 m. The composition of the atmosphere and the air temperature in the cockpit were maintained using an air conditioner. The pilot breathed pure oxygen.

In this case, the hull of the nose of the aircraft did not experience any mechanical stress. The outer skin maintained atmospheric pressure, and the inner skin kept pressure inside the cockpit. Airtightness between the two skins was ensured with aluminum foil. Initially, the pilot was in the usual position in an experimental aircraft with the V1 index, but already on the version of V2 and later versions of the scout, the pilot was located in the cockpit lying down. This was done because of the difficulties with sealing a large compartment in the vertical position of the pilot. Pilot's box was mounted to the rear cockpit partition. 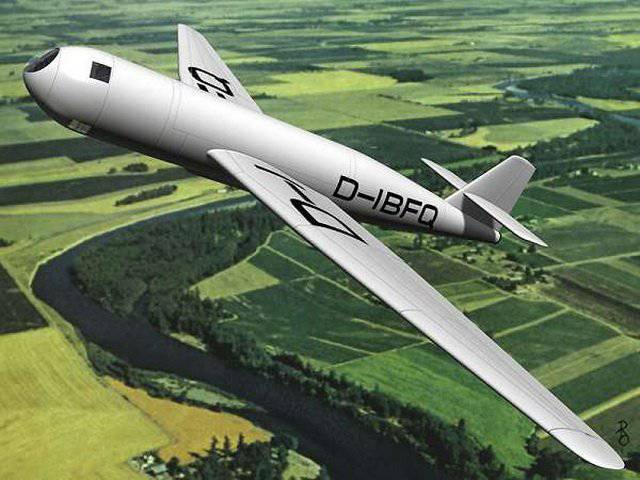 The entire nose of the aircraft could detach from the fuselage using 4-x tear-off bolts, after disconnecting, it automatically stabilized using the injected parachute. After reaching a certain height with the help of compressed air, the pilot's bed was ejected from the cabin. At the same time, the belts and radio wiring, oxygen equipment and the parachute opened at the same time.

The central section of the fuselage was made of wood and also had a double skin. In this part of the fuselage were 2-e Zeiss infrared cameras, as well as tanks with B and T-fuel and directly the rocket engine HWK 109-509А-1 or А-2 of "Walter", developing traction in 15,7 kN. The power plant used allowed the high-altitude reconnaissance aircraft to overcome 1050 km at a speed of 900 km / h. In the lower part of the central section of the fuselage was a retractable landing ski. The engine combustion chamber and the landing crutch were located in the tail section.

The first prototype of the DFS 228-V1 was completed in 1943. The high-altitude reconnaissance tests were conducted at the Rechlin test center and at the DFS itself. The aircraft Do 228K-V217 was used as a carrier for DFS 3. In total, more 40 flights were made. The second prototype V2 was assembled and tested in a motorless version. In general, the flights of the aircraft were found to be satisfactory, although the pilots noted the insufficient effectiveness of the ailerons at altitude and the excessive sensitivity of the elevator. At the same time, until the end of the war, not a single motorized flight was carried out, and the height of the flights did not exceed 10 km. The aircraft makers had concerns that in the event of the LRE being periodically turned on at high altitude, it is possible that the elements of the reconnaissance fuel system, in particular pumps, freeze. It was planned to avoid this by using heating or using new LREs that used more frost-resistant fuel (A-Stoff and M-Stoff oxygen and methanol). 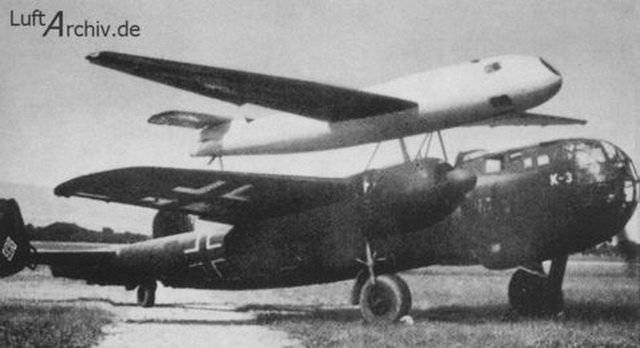 Until the end of the war, a series of ten DFS 228A-0 scouts was laid in the town of Griesheim near Darmstadt. But they were not completed. The DFS 228 V2 prototype was destroyed in May of the 1945 of the year, with only its bow section remaining intact. At the same time, the first prototype of the V1 was captured by the Allies in the American occupation zone. 18 June 1945, the captured prototype was delivered to Stuttgart in the American Air Technical Reconnaissance Division. In June of the following year, the aircraft was transferred to Great Britain, where, most likely, in 1947, it was sent to landfill.