What else to expect? What kind of armored vehicles can NATO send to Ukraine 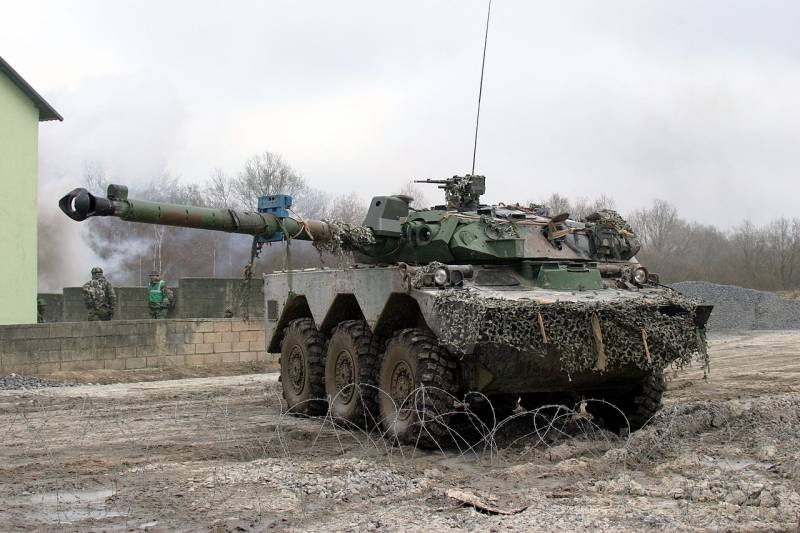 The potential for the appearance of the French AMX-10RC in Ukraine is definitely not zero. Source: wikipedia.org

In the matter of supplying ground equipment to the Kyiv regime, the West shows a certain duality. Along with quite modern equipment, for example, the HIMARS MLRS, PzH 2000 self-propelled guns and the recently announced M1117 armored personnel carriers, Bandera also receive outdated weapon. Which, by the way, is the majority. Such as the French armored personnel carrier VAB, leading its history since 1976, together with a slightly younger classmate Sisu XA-180 from Finland. Or the famous aluminum M113 with a sixty-year history of production. The reasons for this “disrespect” for the Zelensky regime are quite prosaic. Here is the desire to quickly dispose of junk, and the usual European-American greed, and the fear of an uncontrolled escalation of the conflict. In addition, for the latest weapons, the militants of the regime will have to be trained separately - for the relatively small HIMARS and PzH 2000, this is not so burdensome so far. The principle of reasonable sufficiency works surprisingly well for Western suppliers. New equipment is advertised on the battlefields, guaranteeing new orders to industrialists, and the old equipment is being destroyed, again requiring replacement at the expense of Western taxpayers. War, as always, turns into a profitable business.

In emotional calculations after the withdrawal of Russian troops from Kherson, one and a half hundred old Soviet tanks, two hundred armored personnel carriers and fifty MLRS with cannon artillery. Technique Bandera is chronically lacking. This is recorded both by the Ukrainian observers themselves and by video chronicles, in which, along with armored personnel carriers, civilian trucks are engaged in the transportation of personnel. That is why the supply of armored vehicles for the Armed Forces of Ukraine is unlikely to stop in the near future. We are not talking about expansion, since the artificial prolongation of the conflict is among the priority interests of the United States, the main sponsor of the Zelensky regime.

The peculiarities of the conflict dictate certain requirements in the military equipment of the Armed Forces of Ukraine. Firstly, Ukraine now is the realm of artillery of various calibers. Therefore, it can fly from anywhere, even a few tens of kilometers from the line of contact. Armor, even the most primitive, is vital to technology. Secondly, the armor must be on wheels. The distances in Ukraine are rather big, the resource of tracked vehicles is spent inefficiently. Especially with a chronic shortage of armored vehicles. It is highly desirable that with three or four driving axles. Here, the cross-country ability is higher, and mine resistance is at a height. Unfortunately, in the NATO countries over the decades of the Cold War with Russia, a lot of equipment has accumulated that is not bad for Bandera. It is worth mentioning right away that the supply of modern military equipment for the Armed Forces of Ukraine is currently impossible. Europeans are held back by the high cost of cars, and the general scarcity, and the danger of falling into the number of Russian trophies. Let's figure out what the big European trio - Great Britain, Germany and France can give the Kyiv nationalists. Let's leave the multiple launch rocket systems out of the scope of the review, since they are indirectly related to armored vehicles.

The British were among the first to send their illiquid assets for disposal in the vastness of Ukraine. Suffice it to recall the police officer Saxon from the 70s, which is suitable for the realities of the special operation only because of the presence of bulletproof armor. In addition to the Armed Forces of Ukraine, the military of Oman, Mozambique, Somalia and a number of other developing countries are users of the ancient armored car. Apparently, the time will come for another British armored personnel carrier - the FV603 Saracen. The car is six-wheeled, which is welcomed by the Armed Forces of Ukraine. The main advantage of the armored personnel carrier is its high cross-country ability and relatively good power-to-weight ratio - from 14,5 liters. s./t. There are practically no Saracens left in the UK, but no one forbids buying a few dozen armored vehicles from numerous operators - South Africa, Jordan and Indonesia. 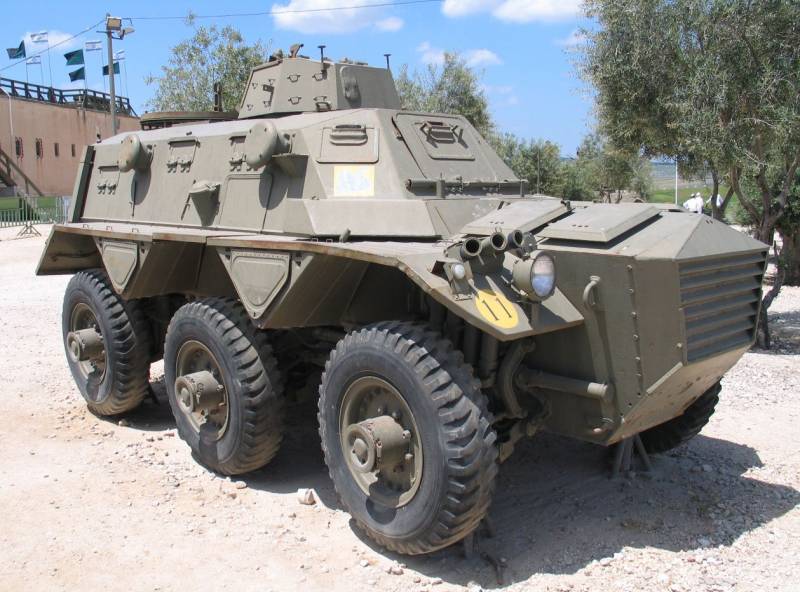 FV603 Saracen for Ukrainian nationalists? Why not. Source: wikipedia.org
The British delivered several dozen MRAPs to Ukraine - including Husky TSV, Wolfhound and Mastiff PPV. But these are armored cars mainly for “good weather”, which is not planned until the spring of 2023, therefore the use of heavily armored trucks (which, in fact, are the various MRAPs) will be limited to highways.

Most likely, an increase in the supply of tracked armored vehicles of the Alvis Stormer series is expected. This is not the first time they have been in Ukraine - before that, the nationalists received Stormer HVM - a short-range anti-aircraft missile system with Starstreak missiles. The British separately trained the operators of this technique at home. Whether this technique has a significant impact on the course of hostilities is unknown. But the appearance of the reconnaissance Stormer 30 (ATGM TOW and 30-mm cannon) can increase the strike potential of the mechanized units of the Armed Forces of Ukraine. 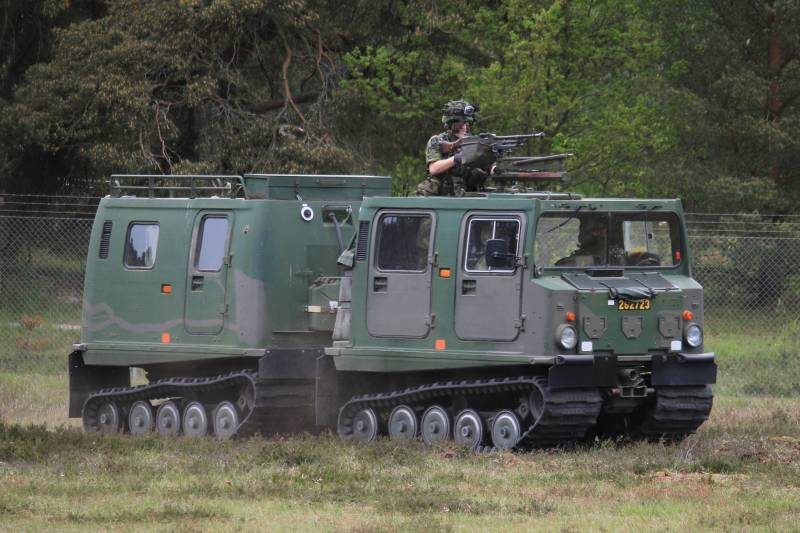 Bandvagn 206. Source: wikipedia.org
Ukrainian winter is ahead. On average, snow cover can reach 60-70 cm, and in some areas up to one meter. Zelenskiy’s next plea for help will likely include a list of snowmobiles. This is a separate class of military equipment, which includes tracked two-link all-terrain vehicles. The closest Russian relative is the GAZ-3344-20 Aleut. Not only Great Britain, but also Sweden, traditionally one of the main users of such equipment, can help the nationalists in this matter with supplies. The first in line is the Bandvagn 206 model of 1976, which the Swedes have produced more than 11 thousand over the years of production.

German armored vehicles in Ukraine are presented rather sparingly - apart from the Gepard ZSU removed from storage and the new PzH 2000 self-propelled guns, nothing more made in Germany appeared. Meanwhile, gas dependence on Russia is gradually weakening, which will invariably increase the supply of weapons - now there is no point for the Germans to be especially careful. Deliveries of fifty Dingo ATF armored vehicles assembled on the basis of the famous Unimog all-terrain vehicle have already been announced. This is a modern armored vehicle developed by the Germans in the early 2000s. Dingo is eight tons of curb weight, protection against machine gun fire (7,62 mm) and the ability to carry eight infantrymen. The advantage of the armored car is high mine protection. Kyiv received a promise to send a batch of cars back in early September, but so far not one of them has shown itself in Ukraine. This may be a repeat of the British story with twenty AS-90s, which Johnson literally wrapped in gift paper in March, but then was banned by Secretary of Defense Wallace. The Kyiv elite should take a closer look at the TPz 1 Fuchs armored personnel carrier, which may appear to replace the Dingo. 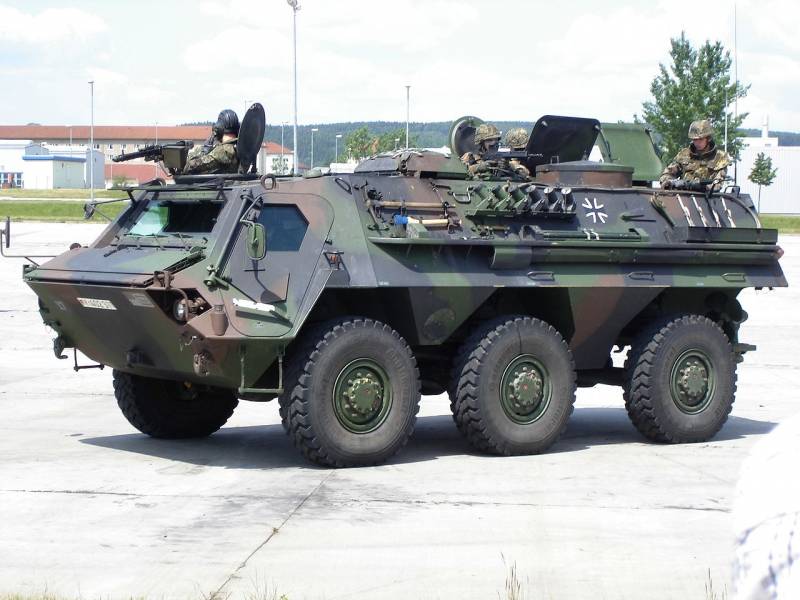 Bandera's TPz 1 Fuchs won't even have to erase their crosses. Source: wikipedia.org
This machine is much more adapted to the realities of Ukraine. There are three pairs of driving wheels, a satisfactory ability to swim and ten paratroopers at once behind the armor. The Germans built more than one and a half thousand of these machines (300 of them in the Bundeswehr), therefore, if Berlin has the political will, the appearance of Bandera Fuchs is more than likely. So far, the Germans are holding on to good, in general, armored personnel carriers, complaining about the impossibility of an adequate replacement. An attentive reader will surely notice that if the Fuchs are tipped by the Armed Forces of Ukraine, then the exotic reconnaissance SpPz 2 Luchs can also be expected. Indeed, the machines were developed and adopted by the Bundeswehr almost simultaneously and had to complement each other on the battlefield. Only now Luchs is a much more complex machine that requires skilled maintenance. Only one scheme with all steerable wheels is worth something. The inability to transport troops is also a big minus in the karma of the German intelligence officer. In addition, the Luchs armored car was withdrawn from service and transferred to storage, which adds to the difficulties in restoring it to combat readiness. 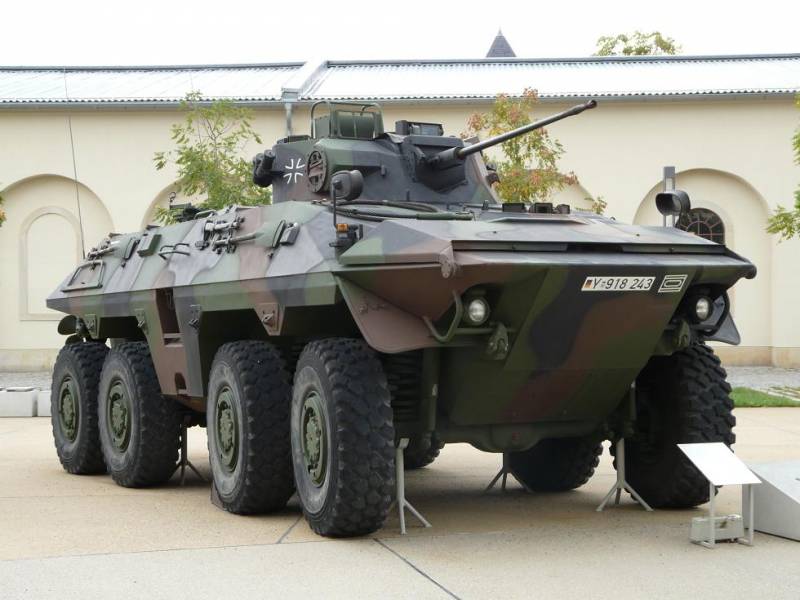 SpPz 2 Luchs. Source: wikipedia.org
Much more likely is the appearance on the battlefield of the German "Martens" - Marder infantry fighting vehicles. This is one of the most common and successful infantry fighting vehicles of the Cold War era. In Germany, the BMP is gradually being replaced by the new Puma vehicle, so the Germans are quite able to allocate a certain amount of Marder. It is still premature to talk about the appearance of German tanks in Ukraine. This is a rather painful issue for the German government - in words they declare the purely defensive composition of the supplied equipment. The Panzerhaubitze 2000 mentioned above is not particularly suitable for this concept, but otherwise it is a perfect Ordnung. With German tanks, Berlin risks running into not only an aggravation of the conflict on the part of Russia, but also an increase in discontent within the country.

The country, which one German general very accurately noted - “are these also winners?”, Is also trying to help the nationalists in Ukraine. From the new armored vehicles of the Armed Forces of Ukraine, only CAESAR self-propelled guns got, otherwise the deliveries consist of the true heritage of the Cold War. These are forty-year-old self-propelled guns TRF1, present in single quantities in the French army. These are no less ancient VAB armored personnel carriers, which have already come under fire from Russian troops. The announced plans include the supply of ACMAT Bastion armored vehicles, the first serial copies of which appeared in 2010. It would seem quite a modern car, but there is one caveat. The export-oriented military industry of France was preparing Bastion for third world countries - Somalia, Niger, Burkina Faso and so on. Now Ukraine is on the list. If the machine is intended for Africa, then it must necessarily have remarkable anti-mine resistance. Albeit to the detriment of all other qualities. Bastion is just that. 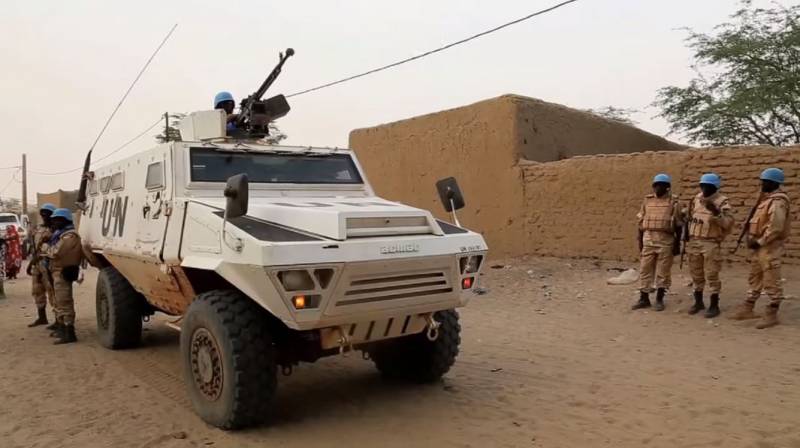 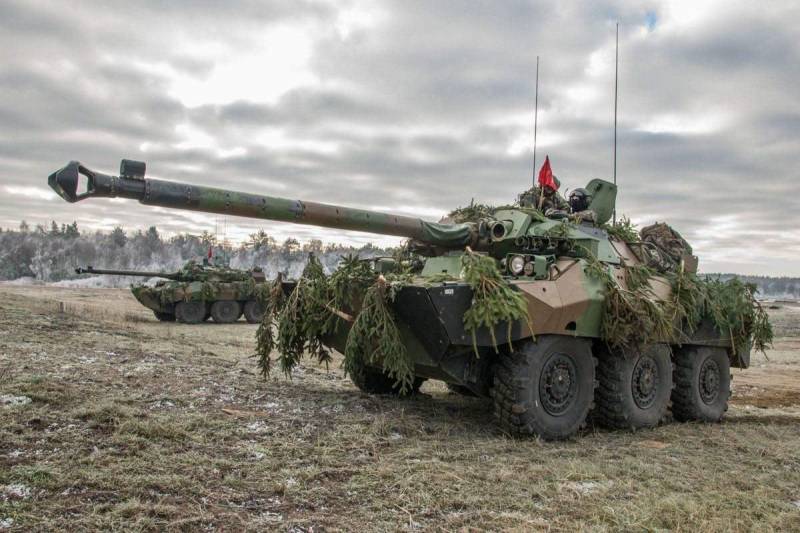 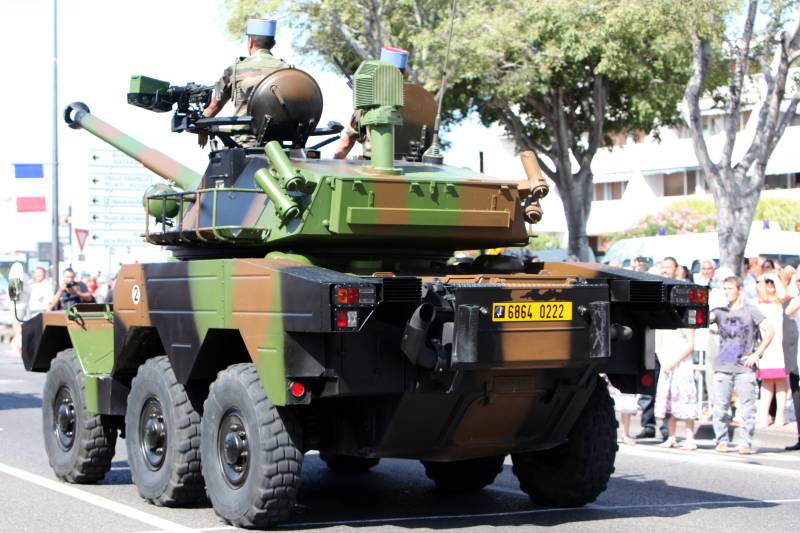 E.R.C. Sagaie. Source: wikipedia.org
Do not underestimate the potential of French supplies to the Kyiv regime. Paris has a lot of highly mobile wheeled tanks in stock - the ERC Sagaie with a 90mm gun and the AMX-10RC with a 105mm gun. With some luck, these vehicles can compete with the Russian BMP-3 and BMD-4M in terms of firepower. At the same time, the image of an offensive weapon in these vehicles may stop the French from deliveries. The reasons are similar to German restraint in this matter.