November 9, 2022 will enter the Russian history. One of the most promising areas for a further Russian offensive has been lost - troops are being withdrawn to the left bank of the Dnieper. Emotionally, it's not easy. But now we need a cold look at the situation, allowing us to predict the further development of events. Recall that the events are played out on Russian territory, a considerable part of which is now occupied. I would like to believe that it is temporary.

The offensive potential of the Ukrainian army had noticeably decreased by the beginning of October, but this does not mean that the Armed Forces of Ukraine are not capable of conducting harassing and deadly fire for weeks and months. At the same time, the position of the Russian troops beyond the Dnieper was unique in its own way - only from here it was possible to organize an offensive both deep into Ukraine and in the direction of Nikolaev and Odessa.

But in the coming months, the Russian army, in all likelihood, will switch to strategic defense. And the Kherson ledge in this situation is a very vulnerable target. You can talk as much as you like about the loss of face, deceived hopes and the senselessness of what is happening, but one thing is important - the withdrawal of troops was a perfect military necessity. This happens when you have to make difficult and even fateful decisions. If a grouping of troops cannot be safely supplied, then its destruction becomes a matter of time. I emphasize that for this the Armed Forces of Ukraine did not even need offensive actions - they would grind the remnants of the troops with mortars, rockets and shells. And this is not the way in which the special operation should move.

Without at all justifying the persons making such decisions, let us ask the question - was it possible to prevent the events by destroying the Ukrainian infrastructure earlier? For example, to smash all the bridges across the Dnieper to smithereens?

The Kherson ledge had only one task - to use it as a springboard for a further offensive. Months of downtime on the defensive would inevitably lead to the situation we are seeing now. Just because behind our guys was the Dnieper with a small number of crossings. When the APU received weapon, allowing to destroy bridge crossings (we are talking about HIMARS), the situation became critical.

There is still an epic ahead with the withdrawal of thousands of Russian groups to the left bank of the Dnieper. Taking into account the fact that equipment and personnel will have to be transferred along pontoon crossings, this becomes a very difficult task. We hope that the Surovikin team will cope with this.

The commanders of units that retreat to the other side of the Dnieper must remind their subordinates that any equipment, even the most expensive and advanced, must be destroyed without delay if it is not possible to evacuate it. If there is no ammunition at hand for undermining, then a few liters of fuel are definitely at the disposal of any mechanized group.

Kharkov "lend-lease" should not be repeated. Unfortunately, the first signs are already there - Ukrainian sources testify to the discovery near Kherson of several Russian tanks, BMP and MLRS "Grad".

Unlike the “organized redeployment” near Kharkov, the withdrawal of troops from the left bank of the Dnieper shows that the initiative is currently in the hands of the Russian command. Although this is not an initiative in the offensive, at least the army does not run under the blows of the Armed Forces of Ukraine. In the general negative around the situation, it looks like a spoon of honey in a barrel of tar, but it is exactly so.

And now let's try to understand if Russia has a chance to return to the Russian city of Kherson.

The trick with the redeployment of the Russian army across the Dnieper is that going back will be many times more difficult. As mentioned above, we must try to leave the right bank with the least losses, not to mention a second assault. The river becomes an excellent defense against the offensive of the Armed Forces of Ukraine, but it can also paralyze the return of Kherson back.

The predatory tactics of Bandera's troops add to the complexity - they will turn the city into ruins rather than leave it. A city with 244 years of history is in danger of being razed to the ground. Therefore, with a high degree of probability, plans to return Kherson under Russian jurisdiction can be said goodbye. At least until next spring. The defense of Kherson in November-December 2022 is completely different from the defense of February-March.

Forcing the Dnieper in conditions where the enemy on the opposite bank has organized a dense defense will be accompanied by gigantic casualties. Especially when all bridge crossings are destroyed. Therefore, the return to Kherson is possible only by land.

And here are a couple of options for the development of events. 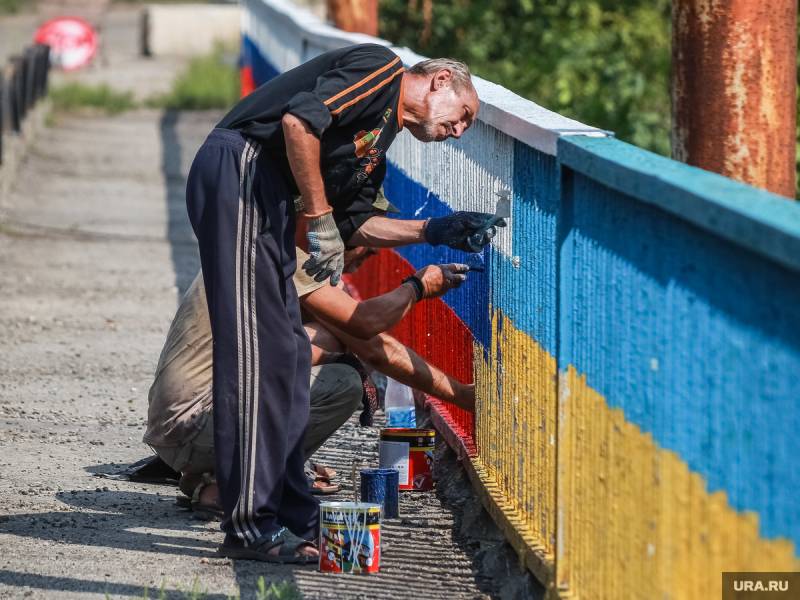 Source: ura.ru
First option is the beheading of the Kyiv regime. Hypersonic, cruise and ballistic missile strikes, it doesn't matter. The physical destruction of the military-political leadership of Ukraine will temporarily cause the collapse of command and control.

Does Russia have the technical capabilities for such a step?

Certainly there is. It remains only to find the political will and the necessary justification. The way to the heart of Kherson lies in this case through Kyiv.

The second option - this is a breakthrough through the remaining intact Dnieper bridges and hydroelectric dams. The nearest one is in Novaya Kakhovka, which we hope will remain under Russian control for the time being. Although under the direct fire of the enemy.

This hydroelectric power station with a dilapidated roadway is generally an extremely complex facility. It thoroughly dams the upper reaches of the Dnieper, turning the river into an impassable Kakhovka reservoir for vehicles. For many tens of kilometers to the north there is not a single accessible crossing. Only in Zaporozhye there are two bridges - the First Bridge of Preobrazhensky and Vantovy. Slightly upstream hangs the body of the dam of the Dnieper hydroelectric power station, which again dams the river.

Will Zaporozhye become a new target for the Russian offensive?

Now it is very difficult to predict, but only along this shortest route can troops be transferred across the Dnieper to Kherson. Of course, in the case of compliance with the mass of conventions. The strike force of the Russian army should be at least three to five times the number of defenders. The tasks of the nationalists in Zaporozhye should not be the transformation of the city of 700 into ruins. The planning of the assault on the city must take into account the possible undermining of bridges by sappers of the Armed Forces of Ukraine, which means that it must be swift. As far as this is possible in the current realities, it is unnecessary to comment.

In the bottom line, we get the withdrawal of the Russian army across the Dnieper and the final switch to strategic defense. The goal is to hold the liberated territories. Given the low offensive potential of the Armed Forces of Ukraine, this period may become a turning point in the history of the special operation.