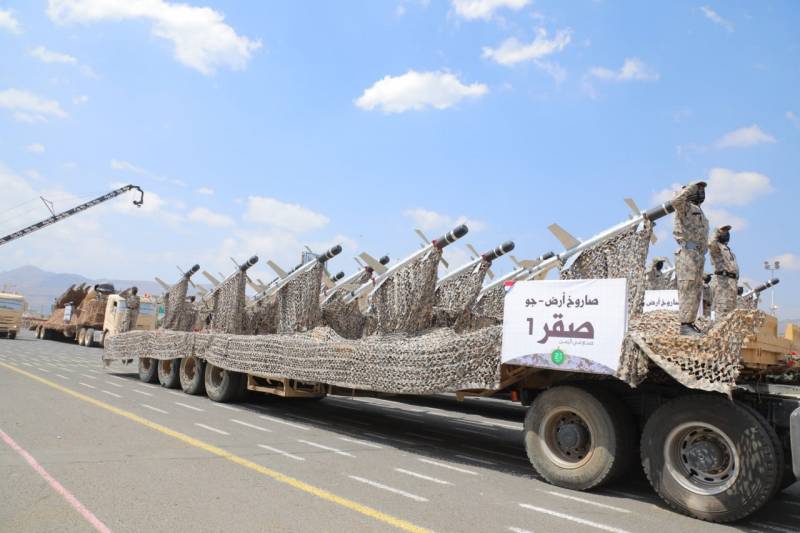 Iran has developed and produces a wide range of anti-aircraft systems with missiles of various types. Of particular interest in it is the SAM, known under the code "358". During its development, there are several interesting ideas and unusual solutions, and the finished rocket is intended for delivery to friendly formations in the near abroad.

Iranian industry is developing a new weapon in secrecy and shows only finished samples. In the case of the 358 missile defense system, the secret is still kept. There is no official information about her yet. Moreover, even the real designation of the product is unknown - the generally accepted digital index was assigned abroad.

According to known data, the Iranian missile was developed no later than the end of the 2019s and then went into production. Approximately in 358, deliveries of such weapons to friendly formations began. The first recipient of "XNUMX" was the Yemeni group "Ansar Allah". Disassembled missiles were delivered by sea to Yemen, where they were to be assembled and used.

In November 2019, the US Navy intercepted one of the Iranian transport ships carrying weapons for the Houthis. Kits for assembling a previously unknown rocket were found on board for the first time. A few months later, similar details were again found on another captured ship. 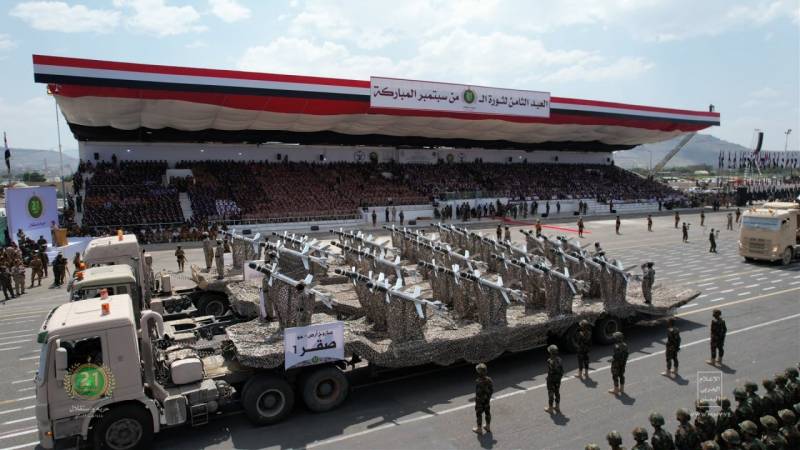 View from a different angle. Photo Telegram / ImpNavigator
In 2020, Pentagon specialists, having received all the necessary components, were able to assemble an Iranian missile. According to the main features of its appearance, it was possible to determine the class of weapons, their approximate characteristics and features of use. At the same time, the trophy product was assigned the symbol "358".

Subsequently, foreign states repeatedly reported new intercepts of missiles at the stage of transportation. The last such news arrived in July of this year. The delivery of the next batch of missiles was stopped by the ship of the Royal Navy of Great Britain. The number of missiles seized was never reported. Accordingly, it will not be possible to estimate the volumes and rates of deliveries.

On September 21, a military parade dedicated to the anniversary of the September Revolution was held in Sana'a. For the first time, various weapons of the Houthis were officially demonstrated on it. In particular, they showed tractors with semi-trailers, on which there were 10 launchers with 358 missiles. The missiles themselves were designated Saqr-1.

Since 2020, the Houthis have repeatedly published videos of the combat use of 358 / Saqr-1 anti-aircraft missiles. The shelling and destruction of helicopters, planes and unmanned aerial vehicles of the coalition was demonstrated. Reports of the successful use of such missiles have been received regularly until recently. 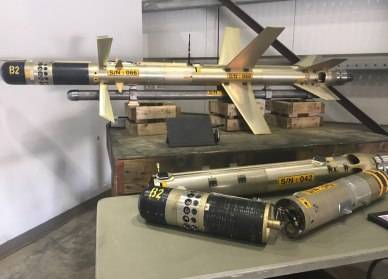 Missiles intercepted by the US in 2019-20 Photo US Department of Justice
In all published videos, missiles successfully approach the intended target and are blown up at a minimum distance. From such an impact, air objects are immediately destroyed or critically damaged, after which they fall.

However, it will not be possible to assess the real effectiveness of missiles from such videos. The total number of launches and ammunition consumption is unknown, as is the proportion of successful and unsuccessful launches. In the published videos, predictably, they show only successful firing.

Thanks to the published videos, some features of Iranian missiles became known. In combination with already known data, this allowed us to draw very interesting conclusions. So, it turned out that the product "358" combines the qualities of an anti-aircraft missile and loitering ammunition. This gives it specific capabilities, and in addition, to some extent, simplifies the work of calculations.

In October last year, it became known that Saqr-1s are present not only in Yemen. A launcher with a partially understaffed missile was found on the territory of Iraqi Kurdistan, not far from one of the airfields. How she got there, why she was brought there, and why the rocket was left without a starting engine, is unknown. However, this episode shows that Iran is able to smuggle its weapons not only to Yemen. 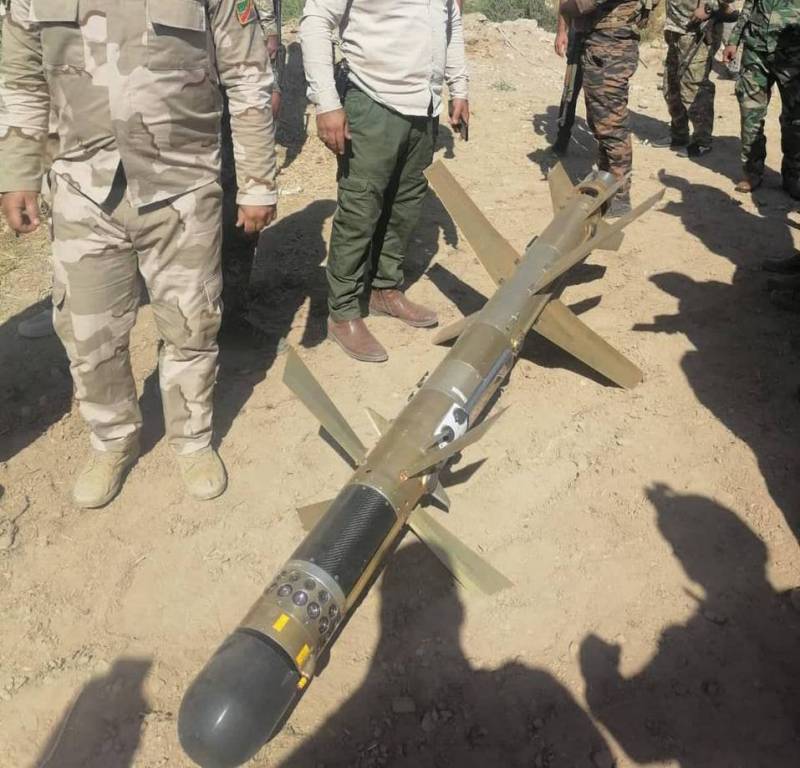 The product "358" is of great interest already at the level of basic ideas and concepts. The general architecture and tasks to be solved make it possible to attribute it to the class of anti-aircraft missiles. Some design features and flight profile make us think of loitering ammunition. With all this, the missile system as a whole is simple and does without complex ground facilities.

Saqr-1 is built in a cylindrical body, on which four X-shaped sets of planes of various shapes and purposes are placed. The rocket body is made detachable and consists of several compartments; planes are also removed. This simplifies transportation to the war zone and delivery to positions. In preparation for the launch, the calculation assembles all the units into a single product, and this process does not require special equipment and skills.

The total length of the rocket in the starting position is 2,75 m, the body diameter is 152 mm. Weight - approx. 50 kg. To start, a solid-propellant starting engine 1,8 m long and weighing 15 kg is suspended under the hull.

Launcher. Photo Telegram / ImpNavigator
The missile has an atypical marching power plant. In this capacity, a small-sized turbojet engine is used, placed in the tail of the hull. In front of it are symmetrical side air intakes. The starting solid-propellant engine accelerates the rocket to 600 m/s, while the main engine provides half the speed. Depending on the flight mode, the range is estimated from 10 to 50-100 km.

"358" is equipped with an infrared homing head and an autopilot. The latter has navigation aids that give it special abilities. As reported, the missile is capable of immediately after the launch to capture the target and aim at it. The mode of loitering ammunition is also provided. In this case, the product rises to a certain height and begins to describe the eight, searching for the target. When it is detected, capture and subsequent defeat are carried out. The duration of such a flight can reach 15 minutes.

The product carries a high-explosive fragmentation warhead weighing at least 10 kg. A fuse with non-contact detonation is provided. 16 laser target sensors are used.

The rocket is launched from the simplest launcher in the form of an inclined rail guide several meters long. Obviously, the complex also includes some controls. However, the operator's console has not yet been demonstrated.

Products seized by the UK Navy in July 2022. Photo by the UK Ministry of Defense

At the intersection of concepts

In general, the Iranian missile "358" can be considered one of the most interesting modern developments in the field of air defense. It is built on the basis of several relevant ideas and new solutions, due to which it was possible to obtain a successful combination of technical, combat and operational characteristics. In addition, special combat capabilities have been achieved that are not available in other modern air defense systems.

First of all, the technical appearance of the product attracts attention. The rocket is distinguished by its simple design, which is also made collapsible. At the same time, high technical and combat characteristics are achieved. As practice has shown, flight data, regular seeker and warheads are sufficient to deal with various air targets.

Of particular interest is the idea of ​​searching for targets in two modes. If there is a target in range, the product flies to it as a simple missile. Otherwise, the missile can remain in a given area and literally be on duty until the enemy is detected. The ability of the missile to barrage allows you to increase the likelihood of intercepting an air target assigned at launch or suddenly appeared. In addition, the overall consumption of ammunition is reduced.

It is noteworthy that the 358 missile does not need advanced and complex ground-based facilities. Such a "complex" includes only the simplest launcher and control panel. It can be easily transported from place to place in almost any transport. 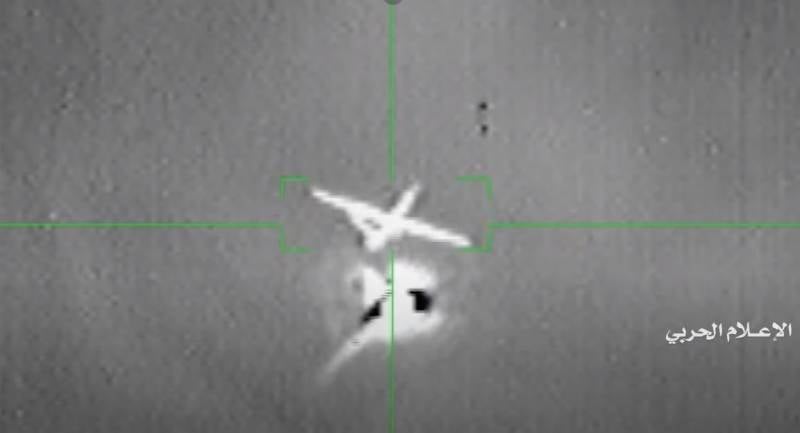 The moment of defeat of an enemy UAV missile "358". Photo Telegram / ImpNavigator
In fact, the Iranian industry managed to create a specialized light air defense system for partisan or other similar formations. Due to the specifics of their activities, they cannot use full-fledged anti-aircraft systems, while portable ones do not always correspond to the tasks ahead. The product "358" should occupy such a niche and bring the firepower of the unit to a new level. At the same time, the special design simplifies the transfer of missiles to the combat zone without imposing restrictions on operation.

Accurate data on the use of Yemeni Saqr-1 is not yet available. But the available materials generally show that such weapons have a certain potential and are capable of solving combat missions. In addition, it is obvious that the presence of such missiles is much better than their absence.

Thus, by developing and producing anti-aircraft systems, Iran is looking for and studying new concepts and solutions. A few years ago, the result of such a process was the 358 rocket with unusual capabilities. She was successfully brought to the series and is now being shipped to friendly formations. Those have repeatedly shown the successful combat use of the received missiles.

Obviously, foreign countries that managed to intercept the deliveries of Iranian missiles carefully studied them and drew conclusions. It is quite possible that as a result of this study, decisions will appear on the development of their own analogues of the "358". But so far, the original concept has not gained ground, and the Iranian missile remains one of a kind.