Automatic machine in the layout "bullpup" A-91 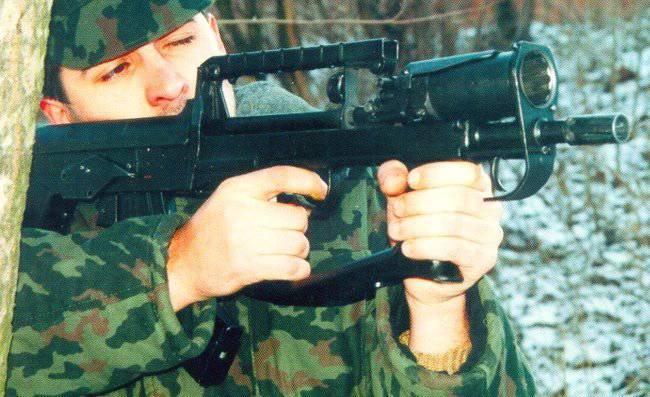 If you suffer for a long time, then something will turn out. The automata in the bullpup layout, although not very rare among weapons and in some countries they are even adopted in the form of basic models, but nevertheless they have a lot of flaws, which is why they lose weapons in the classical layout. Naturally, most of the negative qualities of weapons in the bullpup layout are more likely a matter of habit than real negative moments, but there are also those that cannot be tolerated. For example, the window for ejection of spent cartridges is located close to the shooter, which makes firing less comfortable, and in the case of using weapons with an emphasis on the left shoulder without the possibility of adaptation to a left-handed / right-handed person, it is completely unsuitable for firing. Of course, manufacturers are trying to at least partially compensate for such shortcomings of weapons, but not always solutions that are applied to a particular problem are successful. Let us try to get acquainted with what local designers have done, so that the weapon in the bullpup layout finds its place in the army using the example of the А-91 machine gun and its modernized version А-91М.

Work on this model of weapons began in the early 90-ies of the last century. Despite the rather difficult economic situation and complete confusion in the country, the Tula Design Bureau found the means for A-91 to be born. The project was already led by a fairly well-known designer V. P. Gryazev. It must be said that the development of this sample was approached quite thoroughly, and even without delving into history the creation of weapons, it can be understood that gunsmiths were threatened, if not on a machine gun for universal weapons, then clearly on weapons that would have been taken in special forces. First of all, and most importantly, all the complaints about the 5,45 cartridge were taken into account, but since there was no money for designing a new, more effective cartridge, we decided to take 7,62х39 (the export version of the machine uses 5,56 cartridges). Thus, in the weapons in the composition of the bullpup, this ammunition behaved more obediently and at the same time retained all its positive qualities. In order to exclude complaints about the balancing of weapons in such an arrangement, it was decided to hang a grenade launcher on it, but here the most interesting thing was that it was initially located not entirely usual. Apparently, under the influence of the bullpup layout, the gunsmiths decided to make the weapon even more unusual and to make a barrel-mounted grenade launcher. It had no obvious advantages, but the weapon really turned out to be a very interesting appearance. In addition, there were disadvantages. First of all, it should be noted that the use of a nadstvolnogo grenade launcher was less convenient than a grenade launcher. In addition, it was necessary to abandon the front sight mounted on the barrel of the weapon, since it simply had no place to put it, not on the grenade launcher. Sights in the first model of the machine located on the handle for carrying weapons, which made the aiming line very short, and this could not affect the accuracy of the weapon. 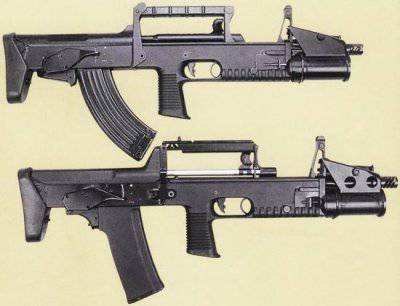 In order to eliminate these shortcomings, it was decided to move the grenade launcher under the barrel of the weapon, and to fly the fly on a high rack. As a result, weapon balancing only won, and the sighting line increased, which allowed the machine to be used even at distances in 600 meters with relative efficiency. And the appearance of the weapon was better from this. A new, modernized model of the machine became known as A-91M, and A-91 was abandoned away and quite reasonably acted.

But the main drawback of weapons in the bullpup layout is still not the balance and the location of the store, which you can get used to. The main disadvantage is the spent cartridges, which are ejected rather close to the shooter’s face, and accordingly, can distract from unaccustomed, and also irritate the mucous membrane with the powder gases. To solve this problem, a channel is made parallel to the barrel of the weapon to retract the spent cartridges forward. This system works as follows. The slide, moving back, removes the cartridge case from the chamber, but does not throw it through the window to eject the cartridge case, but moves it into the channel where the cartridge case remains for some time. Having reached its rearmost point, the shutter stops for a split second and begins to move forward, under the action of a return spring. He pulls a new cartridge from the store and at the same time, driving it into the chamber, pushes the cartridge case through the canal to release it. Thus, the spent cartridges are thrown ahead of the weapon. This allows not only to exclude the impact of powder gases on the mucous membrane of the shooter, but also to make it possible to shoot both from the right and from the left hand without any manipulations with the machine gun. It is noteworthy that this system is called revolutionary and they say that it completely reverses the idea of ​​weapons in the bullpup layout, but these words are intended solely for the average man in the street, who does not clearly represent the nuances of the automata in this arrangement, so this A piece of "advertising" is absolutely useless. People who are interested in firearms know about the Abakan contest, as well as that Stechkin, who implemented in his machine gun, such an original scheme of ejection of spent cartridges, participated in it. Although there were similar decisions before him, this example is the most well known, and it is not far from A-91M. So there is absolutely nothing revolutionary in this, just a good solution, which is mentioned and made of it the main feature of the weapon, which this model stands out among many others, but to say that this idea was first implemented in А-91, by no means case is impossible. 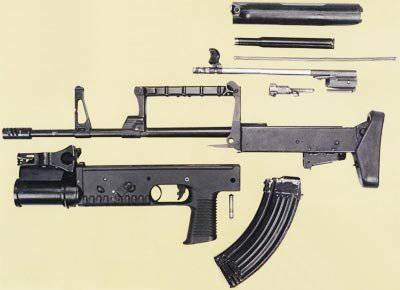 The appearance of the weapon turned out quite modern. Notable features include the presence of two triggers, or rather one trigger of the machine itself and the ring of a grenade-mounted grenade launcher. In addition, it is impossible not to notice the automatic fuse on the trigger of the machine, similar to that in the short-barreled weapon, but here, as it seems to me, it is superfluous. The picatinny-type mounting bracket is located on the carrying handle of the weapon, and the shutter handle is located under the handle. The translator of fire modes also has a position that puts the weapon on the fuse, it is made of a rather large detail, but is located above the weapon shop, which makes switching it rather difficult, since you have to take your hand off the pistol grip, which is not very good. Behind the fly on high ground is a folding sight for a grenade launcher. The machine is powered by detachable box magazines with a capacity of 30 cartridges, 7,62x39 ammunition, as well as 40 millimeter grenades.

Due to the layout of the bullpup, it was possible to significantly reduce the length of the weapon to 660 millimeters, while the length of the barrel of the machine gun remained normal - 415 millimeters. But the weight of the weapons disappoint and strongly. Without a grenade and a magazine, the machine weighs almost a kilo of 4, which is clearly overkill. The rate of automatic fire from the weapon is 600-800 shots per minute, the effective range of use is equal to 600 meters for the automatic part of the weapon and 400 for the grenade launcher. 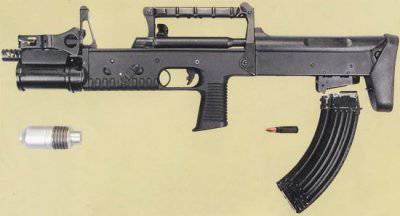 In general, the A-91M makes a rather pleasant impression, but its weight spoils everything. Automatic weapons built according to the scheme with the removal of powder gases from the barrel, the barrel is locked when you turn the shutter. The trigger mechanism of the weapon allows firing, both in automatic mode and in single shots. The cut-off of two or three rounds decided not to introduce.

Not without negative moments. First of all it is, of course, the weight of the weapon, which is clearly not the smallest. And this is with quite active use of plastic in the design of the machine. The second minus is a handle for carrying a weapon, on which the rear sight is strengthened, its height makes the arrow show its head to the enemy “to its fullest”, it is convenient to take aim, but it’s still more convenient to live without extra holes in your head. In addition, do not forget that on top of the carrying handle you can install an additional aiming device, the use of which is just as conveniently hardly possible to call. Well, the remaining problem of the bullpap - the weapon shop is very close to the shooter, which makes its replacement not quite convenient, but in this case, if it were otherwise, then the bullpup would not be a bullpup.

Speaking in general, the weapon turned out to be quite simple, relatively convenient, if you close your eyes to the distinctive signs of the bullpup layout, the location of the fuse switch and the weight. You can also talk about a fairly high reliability of this sample and its resistance to adverse operating conditions, since the weapon has quite a few holes through which the same sand or dirt can penetrate, but this does not mean that the machine is completely immune to contamination. Like any weapon, A-91M likes cleanliness and lubrication, it will, of course, work in the most adverse conditions, but the question is how much this automaton is enough for such bullying - the resource is also not forever. An interesting point is that despite many years since the end of work on the creation of these weapons, only recently they began to be promoted and introduced in more detail, however, perhaps this time was spent on fine-tuning weapons, which is a longer process compared to design and prototyping.