Unconvinced by this refusal of the futility of his design, Maxim Khiram emigrates to the UK, where his weapon gets a completely different rating. 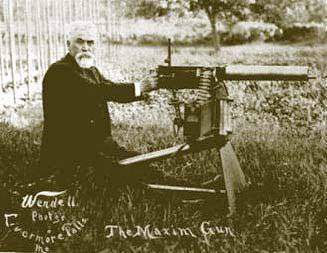 Maxim creates the Maxim Norfeld company in Crayford, Kent, which, after being merged with XIVUMX in the year with the British weapons firm Vikkers, will be transformed into the Vikkers Sons and Maxim Ltd corporation (later - Vikkers Limited).

In 1899, Maxim Hiram receives British citizenship, and in 1901, knighthood from Queen Victoria.

After a successful demonstration of a machine gun in Switzerland, Italy and Austria in 1887, the Maxim machine gun arrives in Russia. The tests of the machine gun were held in April 1887 of the year, but despite the promising data of the new weapon there was no great enthusiasm among the experts of the Russian military department. The military was frightened off by the complex automatics of the machine gun, and, paradoxically, its high rate of fire. Excessive speed of shooting, according to General Dragomirov, is not at all necessary in order to "shoot after a man who is enough to shoot once."

Despite the opinions of skeptics, the first order was made for the supply of 12 machine guns in the caliber of the Russian gun Berdan 10,67 mm.

In May 1889, machine guns were delivered to St. Petersburg. The Russian Navy also became interested in them and ordered two samples for testing. For marine experts fleet The new weapon probably made a somewhat better impression, and during the years 1897-1904 the Russian navy ordered and received 291 Maxim machine guns.

By that time, the gun of Berdan had already been decommissioned, and Maxim's machine guns were adapted to the caliber of the Russian Mosin trilinea: 7,62 mm.

Hyrum Maxim managed to achieve amazing survivability of his weapon. So, during tests in November 1899, his machine gun for a British .303 caliber cartridge fired 15 thousand shots without any serious delays.

The licensed manufacture of the Maxim machine gun in Russia started in February 1904 at the Tula Arms Plant, which allowed, firstly, to significantly reduce the cost of purchasing machine guns abroad, and secondly, to modernize the machine guns quickly, taking into account the practice of their combat use by the Russian army.

The final recognition in Russia of the Maxima machine gun is obtained in the first battles of the Russian-Japanese war, showing its extreme effectiveness in battle.

The Tula gunsmiths of Tretyakov and Shepherds, having familiarized themselves with the production of machine guns in England, having carried out extensive design and technological research at the Tula Arms Plant, significantly reworked and largely improved the design of Maxim, and in 1908, the designer Sokolov created a very successful infantry wheel machine.

Simultaneously with the development of a more maneuverable machine, the mass of the machine gun itself was reduced, and some details were changed due to the introduction of a new cartridge of the 1908 model of the year with a pointed bullet.

The machine gun modernized by Tula was adopted by the Russian army under the official name “1910-mm heavy machine gun” in 7,62.

The machine gun 1910 was repeatedly subjected to improvements that significantly increased its operational performance and slightly reduced production costs in its manufacture.

During the last modernization of the machine gun in 1941, a simplified sight was mounted on it, a wide throat was made in the casing of the cooling system (borrowed from the Finnish machine gun of the 1932 model), which allowed to fill the casing with snow or ice in winter.
Ctrl Enter
Noticed oshЫbku Highlight text and press. Ctrl + Enter
Military Reviewin Yandex News
Military Reviewin Yandex Zen
1 comment
Ad