Syria: a holiday under the sinister sign of terrorism 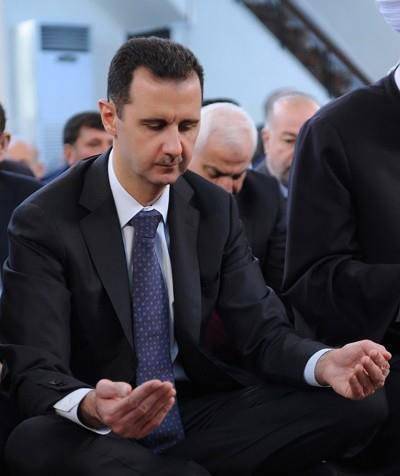 Damascus is already beginning to overwhelm autumn. Together with her came the days of Eid al-Adha, the holy Muslim holiday of sacrifice. And the UN Security Council adopted a statement in which it supported the initiative of the UN special envoy for Syria Ibrahimi on a temporary ceasefire during these holidays. The government and the High Command of the Armed Forces of the SAR have agreed to an armistice. According to Ibrahimi, the so-called "Free Syrian Army" seems to have also given him a promise to abide by the cease-fire. On Friday, 26 October, with the beginning of the holiday, the agreement entered into force.

And ... in the evening of the same day, the "truce" worked. As a result, 47 people were killed, around 100 were injured. In the Damask quarter Daf Ash-Shuk, terrorists blew up a car bomb. Most of the dead and injured are children.

“We were presented with a kind of“ gift ”!” Said the mother of the wounded four-year-old boy when the Syrian Minister of Health, Saad An-Naif, and journalists visited the hospital to which the injured were taken. “My son and I went for a walk and celebrate a holiday, but then an explosion thundered, and my son was wounded in the head and in the arm” ...

This holiday exists only for normal people, and not for those who, striking themselves in the chest, declare "jihad in the name of Islam" ... The explosion in the capital is not the only violation of the declared truce. Attacks on military checkpoints, civilians, and government offices are noted in many cities in the provinces of the country - Damascus, Homs, Idleb, Aleppo, Deir ez-Zor. Naturally, the military were forced to return fire.

But what did Al-Ibrahimi say when he put forth his initiative? What, they say, the "opposition" made him a promise, and if someone did not fulfill this promise, then, they say, the Syrian people will have the right to punish them.

Does the “global community” now recognize Syria’s right to punish the bandits? Judging by the mood of some members of the UN Security Council - they have very different plans ...

Once again, the UN Security Council, despite Russia's proposal, refused to condemn the barbaric attack. Is the death of a 47 person for someone a trifle unworthy of discussion? And it is during the sacred holiday and during the truce achieved with difficulty!

... The streets of Damascus are unusually empty. Syrians, sighing heavily, recall how this Eid al-Adha was celebrated before “democracy” brought its bloody terrorist dagger over the country. “It was fun and crowded,” says one of the Syrians, “all the cafes were crowded.” It was a holiday, much loved by the kids - crowds of parents with children walked through the streets of the city, for the little inhabitants of Damascus there was plenty of entertainment. Now, people once again prefer to sit at home, so as not to become victims of the next explosion.

Syrian President Bashar Al-Asad decided not to sit in the residence, but held a festive prayer in one of the mosques of Damascus. Prime Minister Vail Al Khalki visited the suburb of Damascus Jaramana, familiarizing himself with the lives of ordinary people, visiting a bakery, stores, hospitals. Defense Minister Fahed Al-Freige visited hospitals where wounded soldiers and officers are being treated. He congratulated the wounded heroes on the holiday, wished them a speedy recovery, and thanked them for their valor in fights with armed terrorists. The injured police officers were visited by the UAR Security Minister Muhammad Al-Shaar.

In the city of Tartus, on behalf of President Al-Assad, awards were given to the families of the deceased heroes. Most of the people of Tartu, who gave their lives in other, less calm cities of the Motherland, come from the Sheikh Badr area. When I was in Tartus for two weeks, I saw that the whole city was hung with portraits of fallen soldiers and officers.

At the award ceremony, Syrian Minister of Waqfs Muhammad Al-Seid recalled that residents of the Sheikh Badr region are descendants of Saleh Al-Ali, an outstanding fighter for the freedom and independence of Syria, who fought against the forces of the French colonialists. Now new heroes follow in the footsteps of their ancestors in their opposition to the new colonialists and their accomplices, who are arming the Western countries and the monarchies of the Gulf.

The behavior of the country's leadership shows that the state does not leave its warriors and their relatives in trouble, that Syria takes care of its sons, despite all the incredible difficulties that it had to face now ... When every day there are terrorist attacks, when people are unable to celebrate the holiday and even once again get out of the apartment ...

Cases of violation of the truce - not only in Damascus. In the provinces of Damascus, Homs, Hama, Aleppo, Daraa, Deir-ez-Zor - attacks on checkpoints, barracks, military units and buildings under the jurisdiction of the Ministry of Internal Affairs are carried out everywhere. But not only with the military and law enforcement officers are fighting gangsters.

They attack civilians, including children, cause great damage to the country's economy, causing all people to suffer.

Thus, in the city of Idleb, terrorists laid an improvised explosive device in a dumpster near one of the hotels. As a result, two children were injured.

In Aleppo, militants attacked a pumping station and blew up five pumps that ensured the operation of the water supply system. Residents of the western areas of the city were left without water.

In the province of Deir ez-Zor, armed bandits sabotaged, destroying the pipeline.

This is the third attempt at a cease-fire, which is frustrated by armed terrorists — agents of the United States, the West, and the reactionary states of the Middle East region. The first was at the end of 2011 - the beginning of 2012, when observers from the League of Arab States arrived in the country. The second - in April of this year, when there was an attempt to fulfill Kofi Annan’s six-point plan. Every time the forces hostile to Syria, instead of helping in a cease-fire, indiscriminately accused the government of Syria, not noticing the crimes of the armed rebels. Every time they were incited to violate the cease-fire, they were supplied weapons, ammunition, money, they instigated the army and the people, calling them "revolutionaries" and "freedom fighters". This untied their hands. Therefore, innocent Syrian citizens died again and again from these unleashed hands of terrorists, houses, hospitals, schools were destroyed ...

Shortly before these alarming holidays, UN Secretary-General Ban Ki-moon demanded a unilateral cease-fire from the Syrian government. He argued that this would end the violence in Syria. However, in practice, we see that all attempts at a cease-fire lead only to exaggeration of terrorists and, ultimately, to increased violence, to the fact that even more Syrian blood is shed.

Syrian leadership documents cases of ceasefire. The SAR Ministry of Foreign Affairs sent a detailed document to the UN, which describes in detail where and when the militants commit violence, despite the promise to cease fire.

Will the UN listen to what the Syrian side says? Unfortunately, practice shows that some countries that are trying to subdue the UN by themselves are pursuing a policy of double standards. If Syria and some other countries are not forgiven for the slightest violation of any resolutions, and if they are not, then these violations come up - a completely different attitude to Syria’s aggressive neighbor - Israel.

October 23 Israeli aviation made a gangster raid - you won’t call it anything else - at a military plant in Sudan that manufactured conventional weapons, not weapons of mass destruction. As a result, two factory workers died. This is not the first time Israel has allowed itself such robber raids - and for some reason it has never been condemned for violating the airspace of other countries or for pirate hijackings (such as the recent hijacking of the Estelle ship, on which activists Europeans wanted to deliver humanitarian aid to the besieged Gaza Strip), not for other flagrant violations. If Iraq was destroyed for the slightest suspicion of "manufacturing weapons of mass destruction" (which, moreover, was not confirmed and, as it turned out, was falsified initially), if many US politicians constantly insist that they should invade Syria under the same pretext "Weapons of mass destruction," the Americans bashfully close their eyes to Israeli atomic weapons.

At one of the UN meetings, the representative of Syria, Bashar Al-Jafari, on behalf of his country, directly accused the “world community” of such double standards. If Iran is imposed sanctions for the fact that it seeks to use atomic energy for peaceful purposes, if Syria is stifled with sanctions and threatened it for the slightest suspicion of having chemical weapons, then Israel is not even asked to put its nuclear facilities under IAEA monitoring.

Israel responds to such accusations that, they say, it has the right to defense. But the question is - aren't Iran and Syria entitled to protection? Is the right to defense the privilege of the elect, and not the legitimate and inalienable right of every sovereign state?

But the so-called “world community” is stifling sanctions not on those countries that fly into the night at other people's plants, and certainly not those that have bombed far more than one country. No, those countries that simply want to live in peace are being stifled with terror and violence. Those nations who just want to live in peace. Those people who just want to celebrate their traditional holiday in peace and joy ...