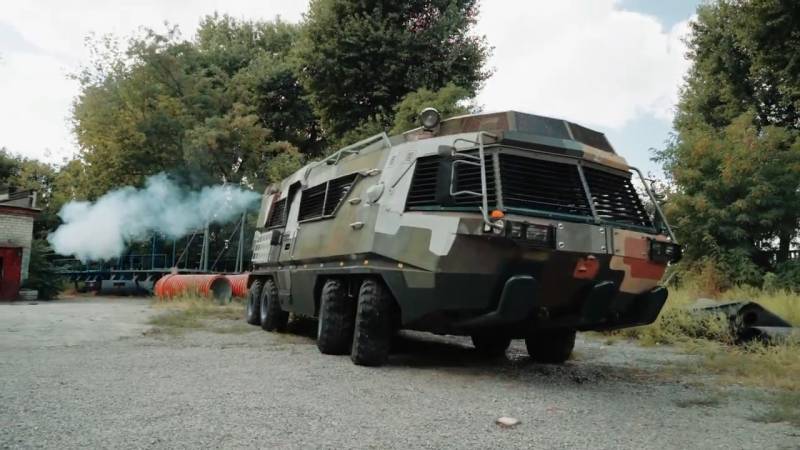 General view of the Ark. There is no similarity with the BTR-60

Over the past few months, Ukrainian armed formations have suffered heavy losses in killed and wounded. The situation with sanitary losses is further exacerbated by the lack of special vehicles capable of quickly and safely evacuating the wounded from the battlefield. These problems are proposed to be solved in different ways. In particular, they recently remembered the Ark medical armored car, built by enthusiasts several years ago.

In 2014, after the start of the so-called. anti-terrorist operation, the Ukrainian army was faced with a lack of combat-ready armored vehicles and special vehicles. In particular, it turned out that the fleet of ambulances and medical vehicles does not meet the current situation and existing requirements. To solve this problem, it was proposed to use the existing equipment, and in parallel, the development of new projects began.

In the same year, one of the car repair shops in Dnepropetrovsk offered its own version of an ambulance for the troops. Previously, she developed a project for the restructuring of the BTR-60 armored personnel carrier into a tourist "motorhome" with high cross-country ability. In 2014, with minimal effort, it was converted into an armored car and named the Ark. Soon the product passed "factory tests" and was offered to the Ministry of Defense. 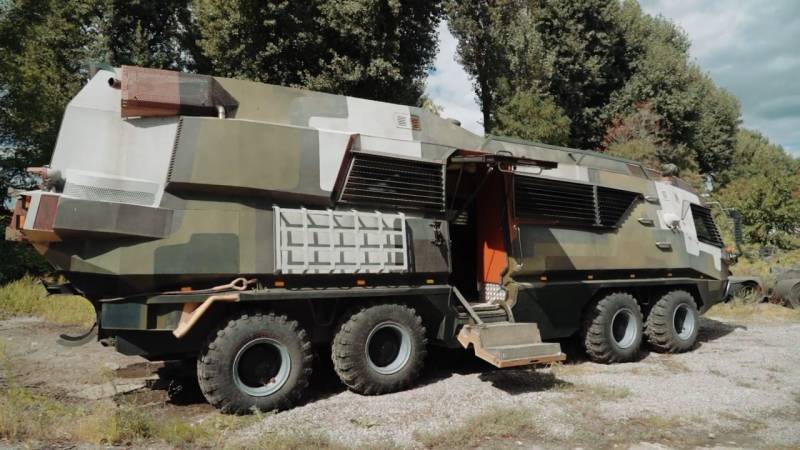 Starboard side and stairs to access inside
Despite the high marks of the developers, the department was not interested in their car. The "volunteers" who collected aid for the army privately were not enthusiastic either.

In the future, the ambulance "Ark" repeatedly reappeared in the news. Its creators showed its various features, talked about the advantages and the need for such equipment in the army. However, such advertising was not successful. The Ministry of Defense still showed no interest in the armored car of "garage" origin.

However, the armed formations were not left without ambulances. Such equipment was purchased through the Ministry of Defense or by the forces of public organizations. However, only factory-made samples entered the army. Naturally, issued by specific enterprises. As it became known later, all this was not without corruption, overpricing, missed deadlines, etc.

In September, the Ukrainian media again remembered the "Ark" and filmed a new report about it. The developers again praised their armored car, talked about its need for the army, etc. At the same time, they tried to literally sell this product: a collection of donations for a “ransom” was announced. The handicraft armored vehicle was valued at 10 million hryvnias (about $270). 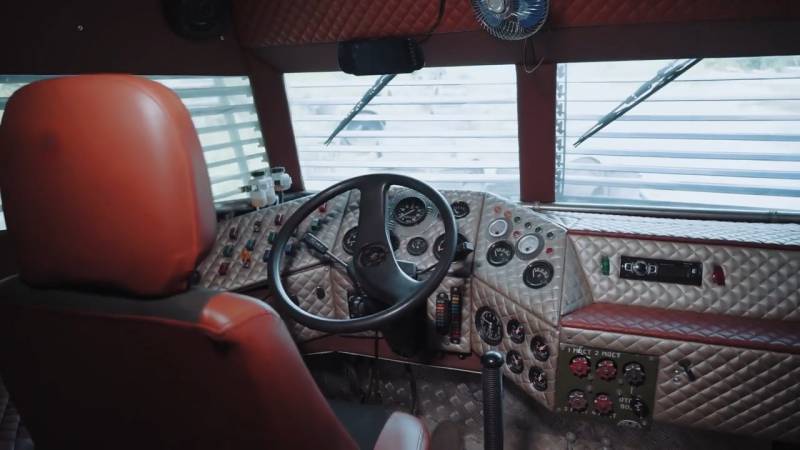 Almost two months have passed since then, but the situation has not changed. The "Ark" remains in a single copy without a future. It has not yet been possible to collect the desired amount, and the Kyiv regime is not going to buy out the “unique” car. Building a second instance is also impossible. However, all this does not prevent the auto repair shop from promising the construction of entire batches of equipment.

On a ready basis

It is reported that the "Ark" is made on the basis of a decommissioned armored personnel carrier BTR-60. During the restructuring, some of the elements of the armored hull, chassis, etc. were retained. At the same time, a number of new parts and elements were introduced. The resulting machine in appearance and design is very different from the original armored personnel carrier, and it is almost impossible to recognize it.

In fact, only the lower part of the former body was preserved, and it was lengthened by inserting it between the second and third axles. A new superstructure was installed on this unit, which formed a full-fledged wagon body. The superstructure was made up of parts of different shapes, which gave it a specific look.

The protection of the ambulance consists of 3 mm titanium sheets around the perimeter of the body. There is a semblance of combined protection, made with rubber sheets between metal parts. There are also some "armored glass" 3,5 mm thick with metal shutters. The developers claim that such armor protects against 7,62-mm automatic bullets and some fragments. 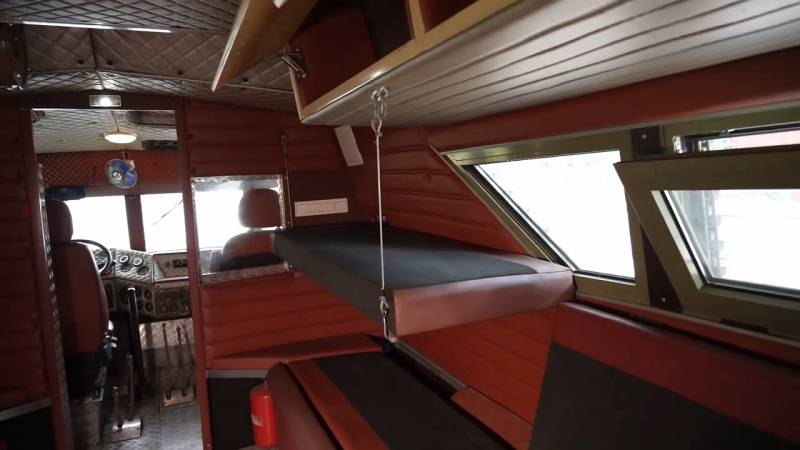 Inhabited compartment, forward view. Regular beds are not suitable for stretchers and the wounded
The layout as a whole remained the same, although adjusted for a new role. The driver is located in the forward part of the habitable compartment. The entire central part of the car is a living compartment with places for passengers and various equipment. The power plant is placed in the stern; above it in the superstructure there is a 500 l water tank

Like the BTR-60, the Ark has two engines. Regular engines were replaced by two turbocharged diesel engines of unnamed power. In the running gear, the former independent torsion bar suspension is retained. The car, weighing 13 tons, is said to reach speeds of up to 80 km / h on the highway. For comfortable movement, the speed should not exceed 65-70 km / h.

In the habitable compartment along the sides there are soft benches for seated or recumbent passengers. There is also a kitchen with a sink, a gas stove and a refrigerator, a bathroom, heaters and air conditioners, as well as other comfort items. At the same time, there is still no medical equipment on board the "ambulance". There is not even the simplest suspension for a stretcher, mandatory for such equipment.

The developers claim that the necessary equipment can be installed when preparing the armored car for service. It is proposed to place various devices, instruments, etc., up to the operating table in the habitable compartment. The car will allegedly fit up to 24 seated or up to 10 lying wounded. 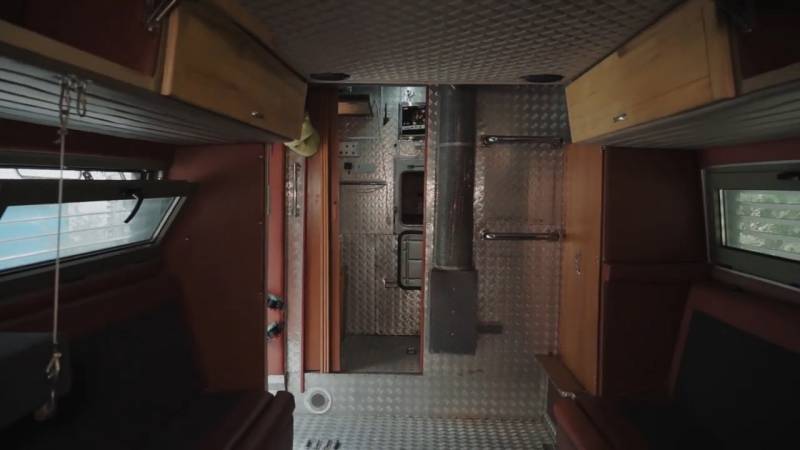 Back view. You can see the household compartment and the hatch for access to the water tank

The situation around the ambulance "Ark" looks very interesting. So, back in 2014, a small car repair shop, on its own initiative, assembled this product and since then has been trying to sell it to the army or volunteers. Despite all the efforts and advertising, all this has been going on for the ninth year. Recently, they tried to collect donations for the car, but they did not succeed in this matter either.

Apparently, the Ark project was originally created with an eye on government contracts. The workshop hoped in one way or another to interest customers and obtain the necessary funding. It was not possible to do this, but the developers of the armored car do not lose hope. They promise - if the appropriate funding is available - to give away the existing Ark and build a dozen new ones.

The situation looks even more interesting from a technical point of view. So, the "Ark" is made on the basis of a morally and physically obsolete armored personnel carrier. Some of the units were replaced with modern counterparts, but the remaining parts remained in place. This will provoke breakdowns and create risks for the wounded. It is also easy to see that the ambulance is heavier than the original armored personnel carrier, although the declared driving characteristics remained at the same level. Probably, there are additional loads on the chassis, which also threaten to break.

The "Ark" is positioned as an ambulance, but it still does not have the appropriate equipment. The equipment in the habitable compartment corresponds to the original configuration of tourist transport, which, at least, does not meet the needs of the medical service. At the same time, over the past years, despite all the talk and promises, no re-equipment has been carried out. Whether it can be done, and how difficult such work will be, is unknown. In addition, it is not clear which of the developers' promises can be realized, and which are fundamentally unfulfillable. 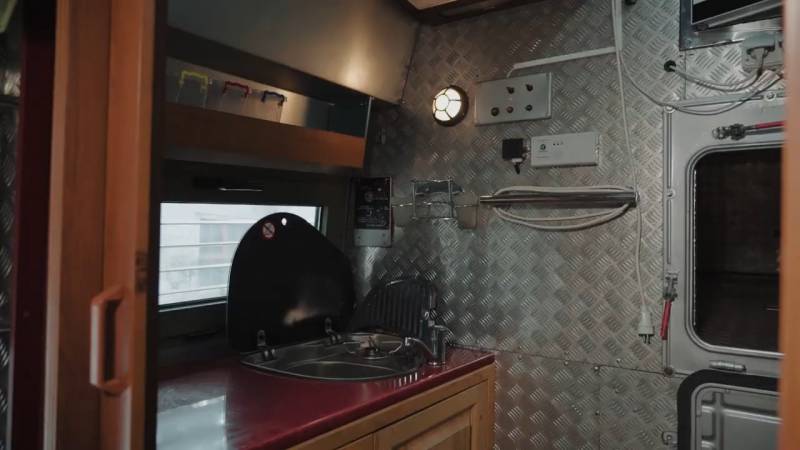 Camp Kitchen
However, as reported, the car received a reservation back in 2014. The use of 3 mm titanium sheets and rubber lining has been reported. Such "combined armor", incl. in combination with large glasses, it can only protect against small fragments that have lost their energy. In fact, the Ark's main defense is the conventions against attacking ambulances.

Thus, the sanitary armored car "Ark" was created not only out of good intentions, but also because of the desire to make money. However, the resulting product has a number of specific features and shortcomings, which actually closed his way to the army. More than eight years have passed since the first demonstration of such a machine, but it has not yet entered service, and all attempts to sell it have consistently failed.

It should be noted that the success of such a project would benefit only its creators - they would receive money for the construction of equipment. At the same time, the Ark, both in a single copy and in a small series, would not have helped the Ukrainian formations. Just to evacuate the wounded from the front line, they need dozens of ambulance armored cars or other similar equipment. But they are not, and to solve such problems, now you have to use any available transport or civilian ambulances.

All these processes, as well as the risks and threats associated with them, are one of the logical results of the extremely illiterate policy and military adventures of the Kyiv regime. In turn, they result in increased losses due to problems with the evacuation of the wounded. However, recent years have clearly shown that the Kyiv regime does not care about the preservation of its own soldiers, and it is only interested in ambulance transport in the context of corruption schemes.