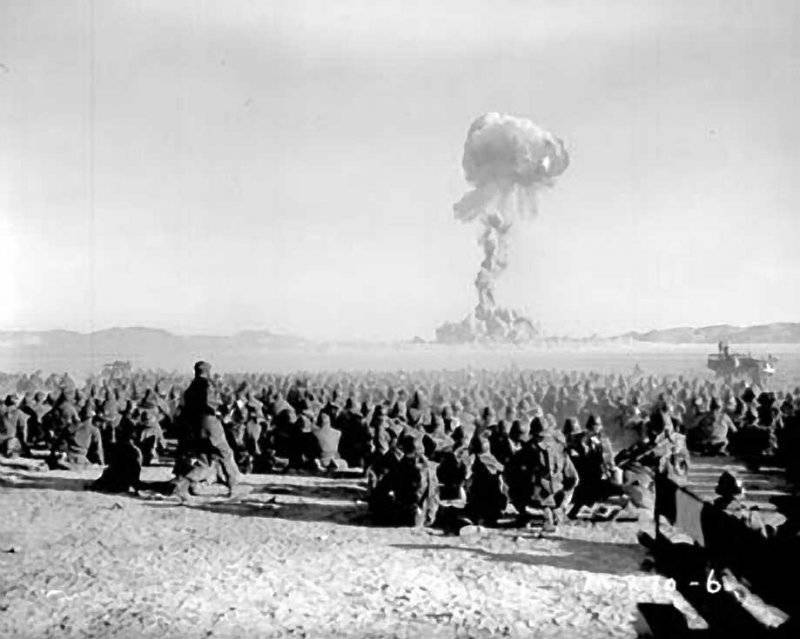 Nuclear weapon, like any other weapon, requires tests, the essence of which is to establish the degree and effectiveness of the destruction of manpower and equipment of a potential enemy as a result of a nuclear explosion.

Today, it is known that eight nuclear powers fired more than 2 thousand nuclear explosions:
- US 1054 testing at sites in Colorado, Nevada, Mississippi area, Marshall Islands, Alaska, New Mexico;
- USSR 715 tests at landfills in Kazakhstan, in Semipalatinsk, on Novaya Zemlya, in Toska and other places in Russia;
- UK 45 testing at landfills in Australia and the USA;
- France 210 test sites in Algeria and French Polynesia;
- China conducted 45 tests in Xinjiang Uygur Autonomous Region;
- India 6 Test at Pokhran;
- Pakistan 6 test in the Chagai Hills area;
- DPR 2 tested on the territory of Hwadae-ri.

The first nuclear explosion was carried out by the Soviet Union in August 1949 of the year, and the last in October 1990 of the year.

The code name of the Tots exercises was "Snowball". An official TASS report said that an atomic explosion was being carried out in accordance with the plans for experimental and scientific research. The purpose of these tests was to study the effect of the damaging factors of a nuclear explosion for solving the tasks of defense against an atomic attack.

It is known that nuclear weapons have significant destructive power and have a number of specific damaging factors: shock wave, strong light radiation, penetrating radiation, radioactive contamination of the territory. In order to work out effective methods of protection against a nuclear attack, it was necessary to review all the acquired methods of combat operations, increase the survivability of the country and, most importantly, protect the population.

It should be noted that by the 1954 year, the US Army was armed with about 700 atomic bombs; they carried out 45 nuclear weapon tests, including two bombing of the Japanese cities of Nagasaki and Hiroshima. By this time, the American side had already developed ways to protect against this terrible weapon and studied the main parameters of the defeat when using an atomic bomb.

By the 1954 year in the USSR, eight tests of atomic weapons were carried out, and the results of the bombing of Hiroshima and Nagasaki were also carefully studied. This made it possible to develop not only instructions for the conduct of hostilities under the conditions of the use of an adversary of nuclear weapons, but also to develop methods of protection against the destructive factors of a nuclear explosion. Many of the recommendations developed by Soviet specialists are still relevant today.

Combined military units assembled from different types and types of troops took part in the exercise. The personnel of the troops were fully provided with protective capes, stockings and gloves. At special points, a large number of decontamination kits were prepared for the sanitization of military personnel and equipment.

All military personnel were instructed on methods of protection from light radiation, from the actions of the shock, as well as the sound wave. And those groups that were supposed to be closest to the epicenter of the explosion were given special darkened films for gas masks, in order to provide additional protection from light radiation, and shelters and trenches were prepared to prevent the shock wave from the fighters from being hit. The special detachments of the chemical troops were assigned the obligation to ensure the protection of military personnel from penetrating radiation.

Territory within 50 km. from the epicenter of the explosion was divided into five conditional zones: 8 km., 12 km., 15 km., 50 km., and 5-I zone was in the span of an airplane carrying an atomic bomb.

All residents were evicted from the first zone, livestock, foodstuffs and movable property were removed.

In the second zone, a few hours before the explosion, the population was placed in natural shelters: beams, ravines, and holes. The cattle had been driven back to other protected areas in advance.

In the third zone, the population was taken out of their homes no closer than 30 meters from the buildings and 10 minutes before the explosion was ordered to lie down on the ground.

The population in the fourth zone was only threatened with radioactive contamination, so two hours before the explosion, people were sheltered in houses.

The population of the 5 zone was taken out of this territory, and the cattle were sheltered from barns or driven away away from the zone.

The exercise was attended by leaders of all clans and groups of troops, commanders of military districts, fleets and flotillas, as well as the defense ministers of friendly countries.

Military maneuvers were carried out on the ground of the ground forces, located in a sparsely populated area of ​​the Orenburg region (near the village of Totskoye). The essence of the scenario of the doctrine: on the part of the attackers - the breakthrough of the enemy's lines with the use of atomic weapons, and on the part of the defenders - the organization of defense in the use of advancing nuclear weapons.

Reset the atomic bomb power 40 CT. It was produced from the aircraft TU-4. The crew passed a special training on the accuracy of bombing.

To assess the impact of the damaging factors of an atomic explosion, samples of military equipment were placed in the explosion area, fortified engineering structures were built, and various animals were left.

It is known from archival documents that the planned security measures almost completely excluded the influence of destructive factors on the participants of the exercise.

Brief chronology of teaching:
- in 9 h. 20 min. the management of the exercises hears the report of meteorologists on the situation in the area of ​​the test site and makes a decision on the conduct of an atomic explosion;
- in 9 h. 34 min. an atomic bomb is exploded;
- reports on the actions of the troops and the radiation situation;
- after 5 minutes after the explosion, artillery fire and strikes begin aviation;
- in 10 hour. 10 min. an attack on the positions of the enemy;
- to 12 hour. advanced offensive units enter the atomic explosion zone;
- in 16 hours the teaching is completed.

The lessons and results of the military exercises conducted in 1954 played an enormous role in preparing the army for combat in terms of the use of atomic weapons, and ultimately served to strengthen the combat readiness of the Armed Forces of the USSR.

More than 58 years have passed since the Totsky military exercises, but measurements made on the territory of the test site show that the radiation background is normal, and the incidence rate of the population is no higher than in other regions of the country.

The 10 September 1956 military exercise at the Semipalatinsk test site was conducted with the aim of the army working out an emergency landing in the affected area of ​​the atomic explosion of the amphibious units and holding positions until the main forces approached. The Deputy Minister of Defense of the USSR Marshal M.N. Nedelin The technical support and conduct of the nuclear explosion was entrusted to Colonel General V. A. Bolyatko, commanded by the landing troops Lieutenant General S. Rozhdestvensky.

The main objectives of the exercise were to specify the possible time of the landing of the assault after a nuclear explosion and to determine the minimum distance from the epicenter to the landing site, as well as to gain experience in ensuring the safety of servicemen in the atomic-destruction zone.

About 1,5 thousand troops took part in the maneuvers, but 270 people, paraded by artillery units and the chemical department, landed directly at the epicenter. The specialists of the chemical division had an important task - the implementation of radiation and chemical reconnaissance. The composition of the landing included four dosimetrist officers (one for each company of the landing). The officers had a difficult task: to eliminate the landing of the landing force on the terrain if the 5 X-ray radiation level was exceeded per hour, as well as to monitor the fulfillment by the servicemen of the work requirements in the contaminated area.

Landing was carried out using Mi-27 4 helicopters. The departure area for the amphibious units was located at 27 km from the front line and at 36 km from the intended explosion center. For the flight of helicopters was allocated a strip width 3 km. The flight was carried out simultaneously with the conduct of artillery preparation by the advancing troops. The line of defense of the enemy was marked by moats, trenches and targets.

All participants of the exercise were provided with personal protective equipment, decontamination and dosimetric devices.

An air blast with a power of 38 kt at an altitude of 270 meters from the ground was made from a Tu-16 plane that dropped a bomb from a height of eight kilometers.

Only after the passage of the shock wave and when the cloud reached its maximum height, did the radiation reconnaissance units leave for the area of ​​contamination and made the necessary measurements. And only after that an order was given to land a landing, which was landed at a distance of 1000 meters from the epicenter of the explosion. The radiation level at the landing site was 03, -5,0 X-rays per hour. The helicopters landed in a predetermined area 43 minutes after the atomic explosion. Due to the almost complete absence of wind in the area of ​​the explosion, the stagnation of smoke from fires and clouds of dust, from those who observed it, blocked the landing area and created difficulties for the fighters.

The helicopters left the bridgehead 7 minutes after landing. The paratroopers had enough 17 minutes to reach the designated line, to gain a foothold on it and repel the attack of the enemy. The exercise ended 2 hours after the explosion. All participants along with the equipment were delivered to the decontamination points.

Of course, during such exercises, it was impossible to foresee all situations, but the maneuvers were carried out with the implementation of maximum precautionary measures.

Violations were by the local population, part of which did not comply with the order to hide in the basements, and watched the explosion from the roofs of houses. As well as some soldiers did not surrender, but retained the infected form.

But these single violations can not be compared with crimes against people who took place at similar exercises conducted by the United States.

It is known that in July 1946 of the year, the United States detonated an atomic charge with a capacity of 21 kt at a depth of 27 meters in the Bikini Lagoon. Two hours later, military units entered the infection zone for research. As it turned out later, due to the lack of personal protective equipment, many servicemen were exposed to strong radiation from radioactive water.

In March, 1954, another explosion occurred in the region. 64 residents of the Marshall Islands and the crew of a Japanese ship were injured after receiving a lethal dose of radiation.

In 1955, an atomic charge with a power of 1 kt was detonated in the immediate vicinity of the landfill, where planned maneuvers were held. Judging by the photos available on the network, the servicemen who are near the explosion's epicenter did not have any protection.

Most of the peoples of the world want to live in peace and harmony, so any threat of military action is perceived as a danger. And it is very scary when such a brilliant discovery as an atomic reaction is used not for the benefit of mankind, but as the worst nuclear weapon of today.