Which barrel is more accurate - fixed or movable 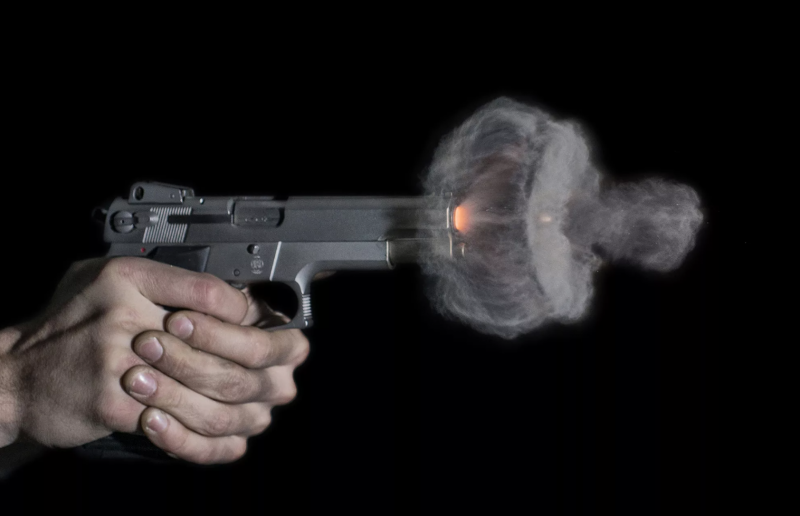 I’ll make a reservation right away that only the accuracy of firing a pistol from the hands is of interest, which system shows from the vise is unimportant, since no one shoots from the vise, except when checking the quality of cartridges. It is a common misconception that a pistol with a barrel fixed to the frame is more accurate than with a movable one, for example, with a short-stroke lowering locking, that is, variations of the Browning scheme.


To begin with, what is the accuracy of the gun itself? In addition to serviceability as such, this is the ability of the mechanism to occupy the same position before the shot, and move in the same way during the shot itself until the bullet leaves the barrel.

First of all, consider the Colt-Browning M111, which has been produced for 1911 years. How do its parts behave before the shot?

The magazine spring, through the cartridges, presses on the bolt from the bottom up, choosing the vertical backlash of the bolt and barrel. The return spring through the guide (shown by the red arrow in the diagram) presses the barrel up and back with its rear end, feeding the barrel back and up, and pushes the bolt forward with its front end, choosing backlashes forward. Since the barrel and the hole in the sleeve are round, the mutual pressure of these parts aligns the parts of the pistol in the transverse plane as well.

Thus, in a serviceable pistol, before firing, the position of all its parts turns out to be completely uniform, I mean the position of the barrel, the bolt with the front sight and the entire frame. 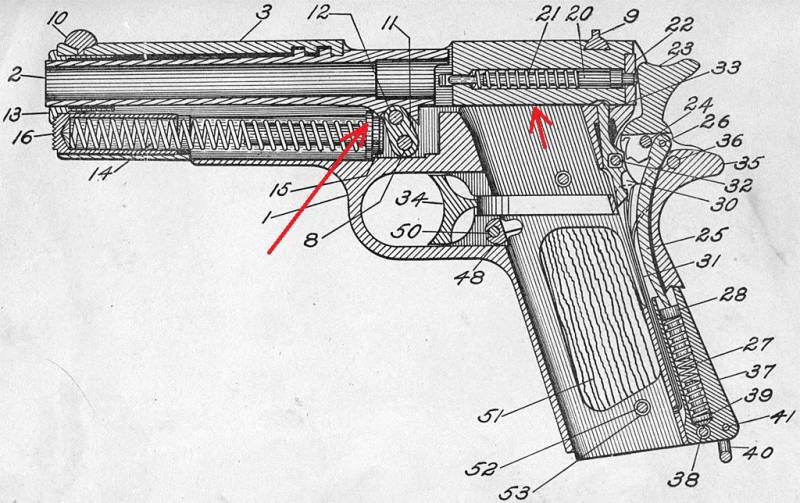 Since the mutual position of the sight and the barrel are uniform, then the accuracy of fire will be achieved.

What happens when a shot is fired? While the bullet moves along the barrel, it, together with the bolt, moves backward in a straight line and uniformly, practically without transferring momentum to the frame, and therefore without causing it to rotate relative to the center of mass of the pistol.

In pistols with a rigidly fixed barrel, the kinematics are similar. The magazine spring also presses upward, choosing the backlash of the shutter relative to the frame, and the return spring presses forward, choosing the axial one. But here's the lateral...

If the spring is on the barrel, then the point of application of the pressure of the end of the spring to the bolt will either be simply random, or will change from shot to shot due to the rotation of the spring around the barrel, which often happens with springs on the rail. This can cause lateral play, if you're lucky. Moreover, it is quite possible that the shutter will not only be rejected with one end to the side, but will stand “diagonally” within the gaps of the guides, which will give the greatest deviation of the bullets.

When fired, the movement of the bolt back does not affect the position of the frame and the barrel, so here, in principle, equality. But here the aiming error generated by the skew of the shutter, in a scheme with a fixed barrel and a spring on it, is potentially greater.

An interesting example from the past is the Margolin pistol, which has a front sight on the barrel and a rear sight on the "bridge". This decision was more than justified for a pistol developed in 1940 - the quality of the machines, the skills of the workers, the incomplete secondary education of the majority of users and workers, and other factors required the design of a pistol with large backlashes and gaps, which, if heavily clogged, could affect accuracy if the springs could no longer align the shutter with respect to the frame.

Indeed, "margolin" can shoot in the hands of juniors with an extreme degree of pollution. But 80 years after the creation of the MCM, machines and tools have become more accurate, and secondary education has become the norm, so a modern pistol does not need to be required to have such gaps and backlashes that were in this sample.

The only reason for the use of a fixed barrel in our time can only be the designer's desire to minimize the height of the pistol frame, since there is no need for free space for the breech to move down, and the axis along which this movement will occur.

Of course, you can place a copy groove on the sides of the breech, but this decision will make the frame of the pistol a little wider, which is not always justified, but such a solution suggests itself with a two-row exit of cartridges to the chambering line, in which the shutter width is still determined by the store.

Another way to compact the frame in height is the rotation of the barrel, which was successfully applied in the GSh-18.