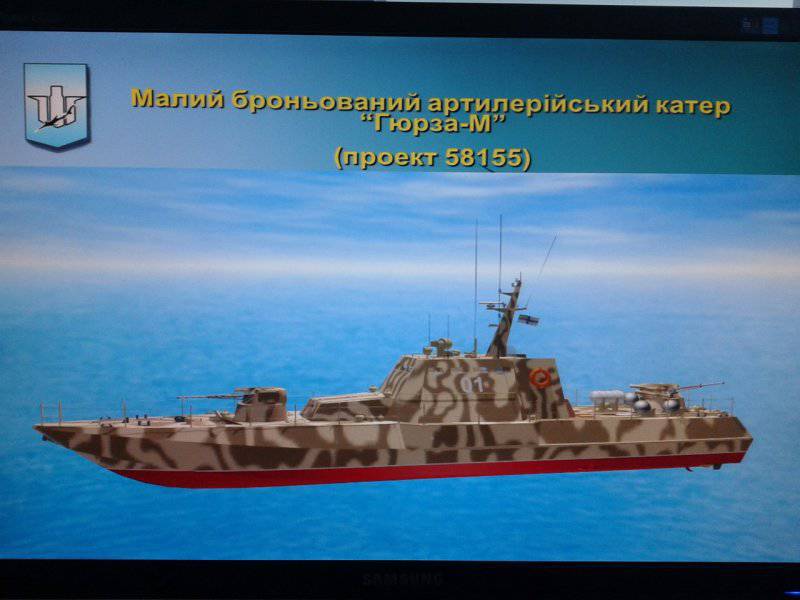 October 25 2012 of the year OJSC “Plant“ Leninskaya Kuznitsa ”in Kiev held the laying of the first two small armored artillery boats of the 58155 (Gyurza-M) project intended for the Ukrainian Navy. Boats are planned for use in solving problems in the Danube River basin and in the coastal zone of the Black and Azov Seas. According to the press service of the Ministry of Defense of Ukraine, up to 2017, it is planned to build nine boats of the Gyurza-M type for the Ukrainian Navy. However, during the ceremony of laying down the first two units of 25 in October, First Deputy Minister of Defense of Ukraine Oleksandr Oleinik noted that the number of boats built "will depend on funding."

The 58155 project armored vehicle (“Gyurza-M”) was developed by the Ukrainian enterprise “State Research and Design Center for Shipbuilding” (Nikolaev) and is a further development of the 58150 (“Gyurza”) design boats, two units of which were built by “Leninskaya forge” in 2004 for Uzbekistan Border Guard Service with US funding (at 5,6 million). The boat of the 58155 project ("Gyurza-M") is larger than its prototype, and has a total displacement of 50,7 tons, a length of 23 meter, a width of 4,8 meter and a draft of 1 meter. The maximum speed "Gurzy-M" to 25 knots, cruising range of economic course 700 miles, autonomy for five days. The crew is only five people. The armament of the boat is made up of two remotely controlled naval combat modules BM-5.01 "Katran-M" (about which we wrote our blog) produced by the GP Mykolayiv Repair-Mechanical Plant, which is a variant of the BM-3 "Storm" combat module for armored vehicles. Each Katran-M module includes an 30-mm automatic gun ZTM1, 30-mm automatic grenade launcher and 7,62-mm CT machine gun, as well as two Barrier ATGMs with a laser guidance system. The boat is equipped with an optical-electronic fire control system and also has a set of portable air defense missile systems.