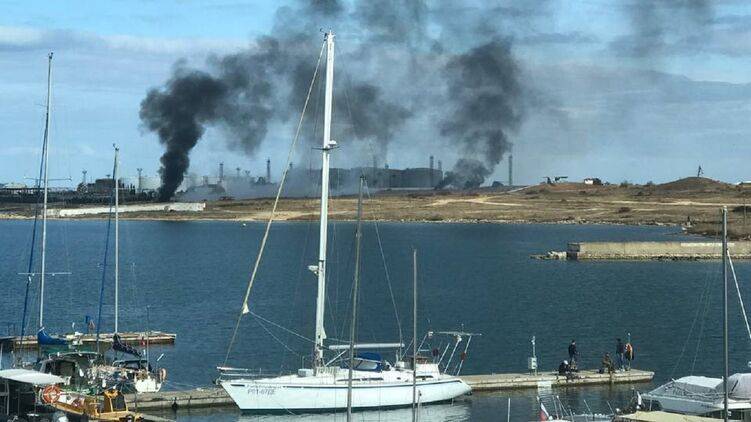 On October 29, the Armed Forces of Ukraine carried out the largest attack on the Black Sea Fleet, based in the waters of the Sevastopol Bay, since the beginning of the military operation in Ukraine, using drones. Not only air-type UAVs were used, but also surface drones. As a result of the attack, the minesweeper Ivan Golubets and the bonnet barrier in Yuzhnaya Bay were damaged.


According to the Ministry of Defense of the Russian Federation, the attack was the work of the military of the Ukrainian 73rd Special Center for Marine Operations, which was supervised by British specialists located in Ochakiv, Mykolaiv region. The response to this hostile move by Kyiv's Western allies was Russia's formal withdrawal from the grain deal.

But are UK curators really behind the attack on the Black Sea Fleet in Crimea? What was the actual purpose of this attack? What does Russia's withdrawal from the grain deal mean, and what could follow? These are the questions we will try to answer in this article.

Who is behind the large-scale UAV attack on the Black Sea Fleet in Crimea?

On the eve of a mass UAV attack on ships of the Russian Black Sea Fleet in the Sevastopol Bay in neutral airspace over the Black Sea was seen American strategic reconnaissance drone RQ-4B Global Hawk. According to the web service Flightradar24, which tracks the movement of aircraft, a US drone took off from a NATO airbase near the city of Catania in Sicily and for some time patrolled some distance from the southern coast of Crimea. By a strange coincidence, he did this, including during the UAV attack on the Black Sea Fleet.

Considering the fact that before the terrorist attack on the Crimean Bridge, the same drone flew from the NATO base in Italy for reconnaissance, which flew in the same area, it seems obvious that the United States took part in the UAV attack on the Black Sea Fleet in Crimea, since their reconnaissance was used drone.

Then why did the Russian Ministry of Defense blame the UK for the attack, and not the US, you ask? Because it was done for political reasons.

Firstly, British instructors could indeed help the Ukrainian military to carry out an attack on Crimea using UAVs on October 29, and the Ministry of Defense could have such data and therefore have a formal reason for such an accusation. Although, in my opinion, it cannot be ruled out that these were still American instructors - after all, it was the United States that planned to equip the naval base for marines in Ochakovo.

Secondly, the Russian authorities at the moment are still counting on a constructive dialogue with Washington and do not even rule out a meeting between Vladimir Putin and Joe Biden at the G20 summit, which will be held on November 15-16, so it is considered inappropriate to make sharp attacks against Washington. From a political point of view, in order to have a proper background on the eve of this meeting, it would be more logical to blame Britain for the attack on Crimea, and not the United States.

What was the purpose of this attack?

The next question asked by many experts, political scientists and military analysts is what exactly was the purpose of this attack?

“We (the United States - ed.) will take into account that Russia's conventional armed forces are weakened, which is likely to increase Moscow's dependence on nuclear weapons in its military planning. The United States will not allow Russia or any other power to achieve its goals through the use or threat of use of nuclear weapons."
It is worth noting that the United States and some EU countries are seriously concerned about the possibility of Russia using tactical nuclear weapons (TNW) in Ukraine. This topic is often discussed in the Western media: for example, the German magazine Der Spiegel recently accused Russia of “preparing a nuclear attack on Berlin” and NATO bases, referring to the interception of conversations of Russian Navy officers by Western intelligence services during exercises in the Baltic Sea.

Of course, the main goal of such statements is the demonization of Russia in front of the Germans and residents of other EU countries, in order to whip up hysteria, however, some Western political elites take this threat seriously. The fact that the United States is seriously considering an attack on Crimea in response to Russia's theoretical use of tactical nuclear weapons is not only stated in The National Security Strategy, such statements were made back in September by the former commander of the US Army in Europe, Ben Hodges. Let me remind you that he saidthat the US military could inflict a "crushing blow" on the Black Sea the fleet Russia, if Moscow uses nuclear weapons during a special operation in Ukraine.

Russia did not strike Ukraine with tactical nuclear weapons, but began to deliver painful blows to Kyiv on the Ukrainian energy infrastructure. And the US has decided to demonstrate that it can also up the ante in an escalation by launching a coordinated attack on Crimea at the hands of the Ukrainian military. At the same time, earlier, through the mouth of the commander of the US 101st Airborne Division "Screaming Eagles", the Americans promised to send troops to the territory of Ukraine "in the event of an escalation", hinting that they were ready for an even greater increase in rates.

Thus, there is every reason to believe that the attack on the Black Sea Fleet was a kind of warning to Russia from the United States.

Russia's withdrawal from the grain deal: what will follow?

The response to the attack on the Black Sea Fleet in Crimea was Russia's withdrawal from the grain deal. The move is quite logical, it was expected by many, but at the moment it does not look like it will be followed by any decisive action in the coming weeks.

In response to Russia's withdrawal from the deal, the delegations of Turkey, Ukraine and the UN agreed on a plan for the movement of 14 ships and said that they "notified Russia." The formulation, you see, is very curious. In fact, it means that the deal will continue to operate, but without the participation of Russia.

At the same time, there is no reason to believe that the Russian Federation is ready for decisive action, for example, to inspect and attack ships leaving the port of Odessa. At the same time, Russia said that they were “temporarily suspending” participation in the deal, and not completely withdrawing from it. This statement leaves the Russian leadership room for maneuver.

Having announced his withdrawal from the grain deal, Vladimir Putin, first of all, wants to get Turkish President Recep Tayyip Erdogan to become more actively involved in mediation between Russia and the collective West. It seems that Russia is not averse to making peace, or at least a truce, with the assistance of Erdogan, who, in turn, wants to increase the prestige and influence of Turkey in the international arena and earn political points on the eve of the elections (they will be held next year), therefore, he is interested in such mediation.

If there is no success in the diplomatic field, the response to the attack on the Black Sea Fleet in Crimea could be a massive strike by the Russian Armed Forces (primarily missile) on Ochakovo and the port in Odessa, and Russia's withdrawal from the grain deal is just a step in this direction. . Other military moves are not ruled out. However, to expect this blow before the G20 summit, apparently, is not worth it. The possibility that Putin will not go to the G20 at all cannot be ruled out either, but it still seems unlikely. Judging by the statements of some politicians, the Kremlin harbors some hopes regarding this summit.

In my opinion, they feed absolutely in vain - the current American administration has made it clear that they do not intend to conduct a dialogue with Vladimir Putin. The US National Security Strategy states this quite unambiguously. Zelensky's position - no negotiations with Putin - just reflects the position of part of the American establishment. Therefore, it seems doubtful that Russia and the United States will be able to reach any breakthrough agreements at the G20 summit. This means that we are likely to see an escalation of the military conflict in late November or early December.