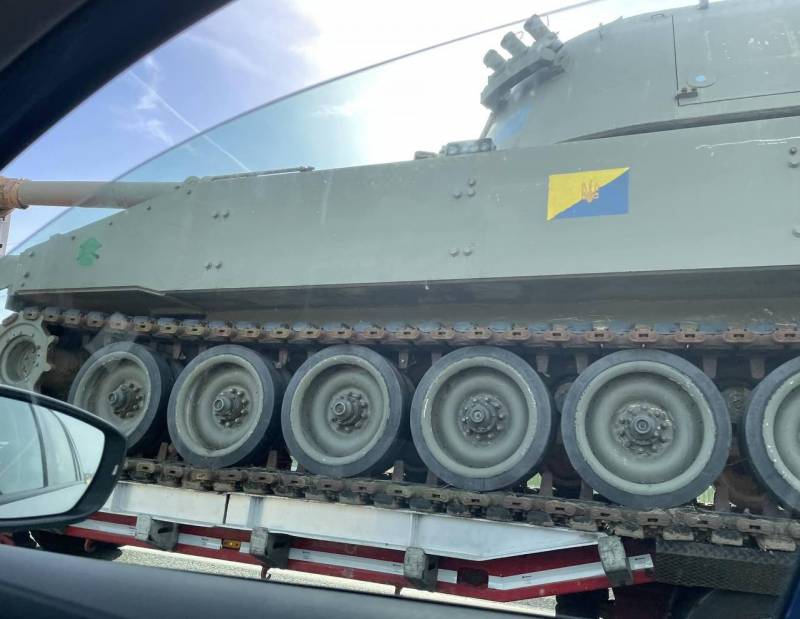 M109L during transportation in Italy, October 2022. Photo by bmpd.livejournal.com

Italy continues to help Ukraine with the supply of arms and equipment. The fifth package of military-technical assistance has already been formed and is being prepared for delivery, including a significant number of artillery systems of various types. The main place in this package is occupied by outdated M109L self-propelled howitzers, long removed from service with the Italian army - several dozen of these vehicles will be removed from storage.

In mid-October, on one of the Italian routes, tractors with tank trawls were seen carrying M109L self-propelled guns. Why these cars were removed from storage, and where they were going, was not known at that time. However, it could be assumed that the transportation of armored vehicles is directly connected with Ukraine.

Judging by the markings, the self-propelled guns transported were previously used by the 52nd Torino Self-Propelled Field Artillery Regiment. On the sides of the vehicle are yellow-blue and yellow rectangles with the Ukrainian “trident” in the center. A characteristic trident appeared in the emblems of the "Turin" regiment after in 1941-43. he participated in the occupation of the Ukrainian SSR.

On October 29, the Italian edition of La Reppublica clarified the situation with self-propelled guns. From its sources in the country's leadership, it learned that the previous government of Prime Minister Mario Draghi, shortly before his departure, managed to approve the fifth package of military assistance for Ukraine, and now the implementation of this plan is beginning. 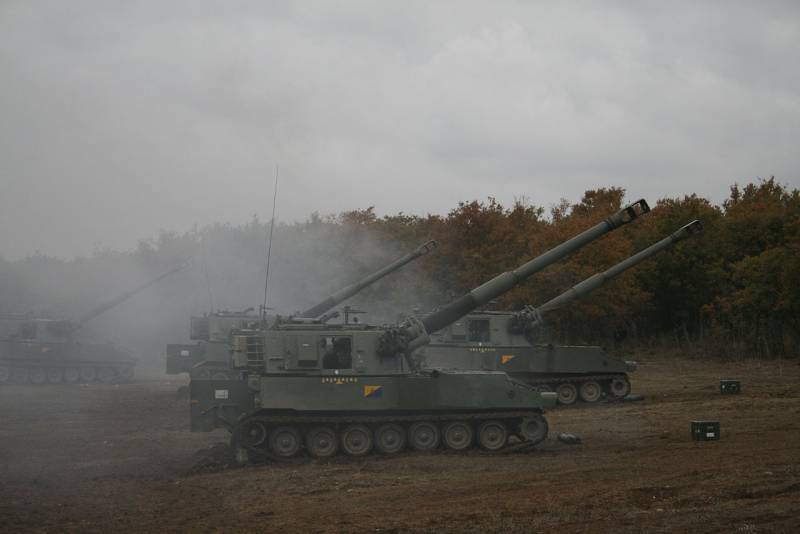 M109L on exercises, 2007. Photo by Wikimedia Commons
The new package mainly includes various artillery systems. Thus, it is planned to transfer two MLRS M270 MLRS and six self-propelled guns PzH 2000. At the same time, self-propelled guns M109L in the amount of 20 to 30 units will form the basis of the package. More exact numbers have not yet been announced. In addition, the press did not find out the start dates and other features of the deliveries.

Thus, a complete picture emerges. A few weeks ago, in Rome, they decided to supply their used self-propelled guns to Ukraine. Not later than mid-October, they began to be removed from storage and prepared for shipment. Due to the small number of equipment, it can be expected that its deliveries have already begun or will start in the near future. Accordingly, over the next few weeks, Italian M109Ls may appear in the combat zone.

American-made 155-mm M109 self-propelled howitzers entered service with the Italian ground forces at the turn of the sixties and seventies. First, the basic model equipment was supplied, and by the mid-seventies, the first upgraded M109A1 received. In total, Italy purchased about 300 foreign self-propelled guns.

By the mid-eighties, this technique was outdated morally and physically; first of all, this concerned the M109 of the first version. In 1986, the Italian company Oto Melara (now part of Leonardo) began a major overhaul and modernization of equipment according to its own M109L project. This project involved updating various equipment and replacing the original M126 and M185 howitzers with the FH-70 gun. 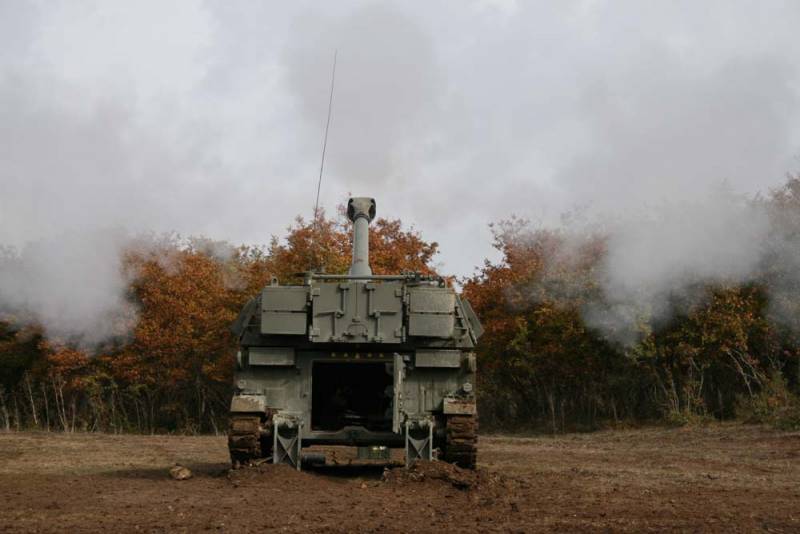 At the time of the shot. Photo by Wikimedia Commons
Repair and modernization of self-propelled guns continued until 1992. For several years of operation, Oto Melara rebuilt according to a new project, according to various sources, from 250 to 280 units. technology - almost the entire available park. Such modernization made it possible to continue the operation of equipment.

The M109L remained in service until the early 2002s. Back in 2000, the Italian army ordered several dozen German self-propelled guns PzH 109, and with the delivery of the first such products, the process of abandoning the obsolete M2011L began. For various reasons, it dragged on, and the last self-propelled guns of the old model were removed from combat units only in XNUMX.

Decommissioned M109L mothballed. Perhaps a certain number of machines that have exhausted their resource have been disposed of. Later, a dozen old self-propelled guns were removed from storage and sent to Djibouti as a military aid. In the second half of the tenth, 128 self-propelled guns were sold to Pakistan. It was reported that Italy still has about 120 of these machines, and they can be sold to the interested party. Moreover, Leonardo offers a new upgrade option for the M109L with another gun replacement.

Now it has become known that 20-30 old self-propelled guns will go to Ukraine. Judging by the photos from the Italian track, this equipment is simply taken from storage bases and re-preserved. Modernization is not provided.

ACS M109L is an Italian version of a deep modernization of the original American M109 (A1). This project proposed the preservation of the main part of the components and assemblies while updating the artillery unit. As a result, the modernized self-propelled gun is externally and in terms of characteristics as similar as possible to the original vehicle. At the same time, two self-propelled guns can be easily distinguished by the type of gun and related devices. 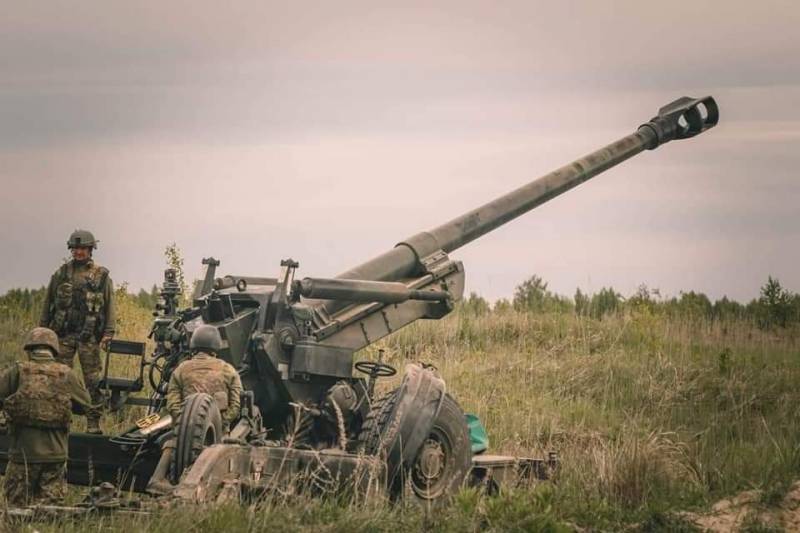 Towed howitzer FH-70 Ukrainian formations. Photo by the Ministry of Defense of Ukraine
The M109L product retained the original hull and turret with bulletproof / splinter protection. Also, the power plant and chassis did not change. The combat weight remained within the limits of 28 tons, the driving characteristics as a whole did not change.

In the frontal embrasure of the tower, a new artillery mount was placed, made on the basis of the serial towed FH-70 system. The latter borrowed the receiver group, recoil devices and some other units. If necessary, finished parts were finalized for installation in the tower.

The FH-70 was a 155mm rifled howitzer with a 39klb barrel. The barrel of the gun was equipped with a two-chamber muzzle brake and an ejector. When mounted on the M109L, the barrel received a characteristic corrugated casing behind the ejector. Loading - using a mechanical rammer. Trained loaders could provide a salvo of 3 shells for 15 seconds. With prolonged firing, the rate dropped to 3-6 rds / min.

The howitzer uses separate loading shots with a propellant charge in a fabric cap. It is possible to use the entire range of 155-mm shells of NATO standards. Depending on the type of projectile and charge, the maximum firing range is from 18 to 24 km.

Fire control is carried out using standard FH-70 sights and manual aiming drives. Shooting data is received using a radio station. Due to its age, the M109L is not equipped with any automation tools and is not integrated into network-centric control systems. 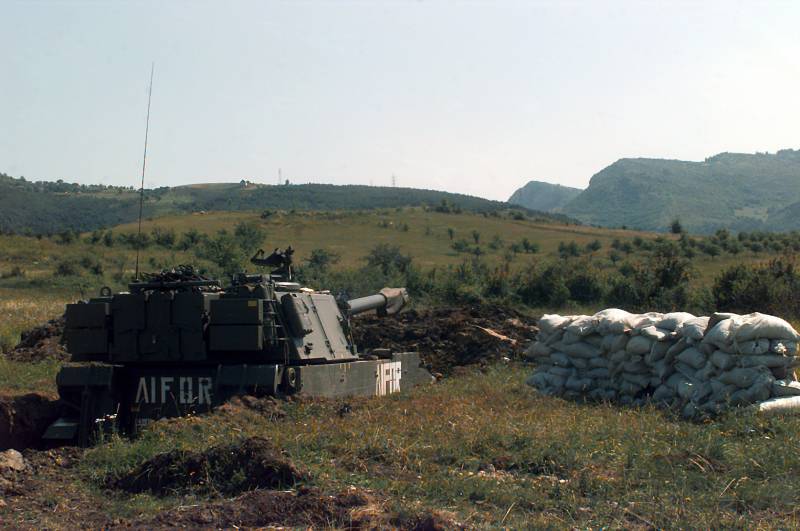 Italian self-propelled guns in Bosnia and Herzegovina, 1996. Photo by the US Department of Defense

It should be recalled that a few months ago, foreign self-propelled guns M109 had already arrived in Ukraine. In addition, FH-70 towed howitzers were supplied from abroad. Ukrainian formations were able to master such weapons and even used them in battles. However, outstanding results were not achieved. In addition, imported artillery quickly suffered losses.

It can be assumed that the delivery of Italian M109L self-propelled guns, in terms of its results and results, will be similar to other episodes of foreign aid. She will face characteristic problems and will not affect the course of hostilities in any way. At the same time, with its help, official Rome will be able to show its commitment to the common cause and indicate support for Kyiv.

Once again, the limited volume of deliveries draws attention to itself. Ukraine will be given no more than 30 self-propelled guns. This is more than in the case of other deliveries and models, however, even three dozen vehicles will not help make up for the losses of recent months and bring the performance of Ukrainian artillery to an acceptable level.

However, it should be noted that after such deliveries, Italy may have about 90-100 old self-propelled guns. It cannot be ruled out that the M109L will also be included in the next Italian aid packages. 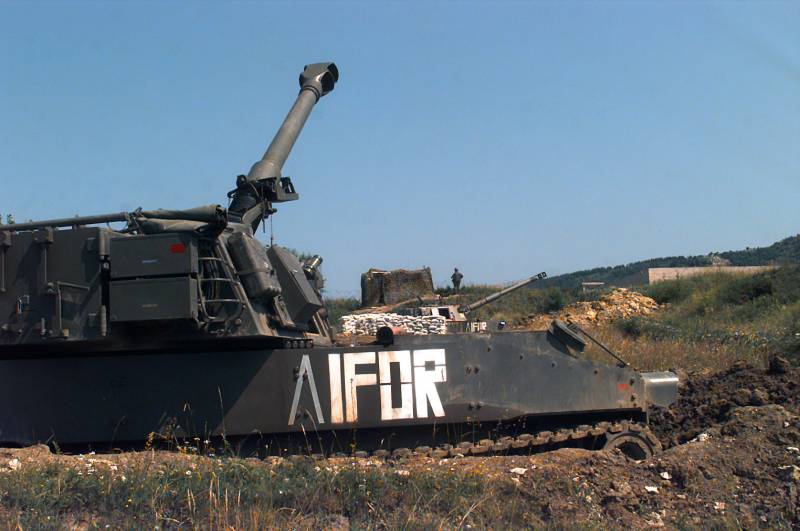 Preparing for shooting. Photo by the US Department of Defense
The problem of quantity is exacerbated by the moral and physical obsolescence of technology. The Italian M109Ls were produced no later than the seventies, and the modernization was carried out 30-35 years ago. In this regard, the technique has limited characteristics and capabilities - and is inferior in all respects to newer self-propelled guns, such as the PzH 2000. In addition, there are questions about the remaining resource.

Finally, the Italian M109Ls in Ukraine will face the risk of being hit. The Russian army has repeatedly demonstrated the ability to detect the movement of enemy equipment and hit it on the march or during transportation. In addition, part of the artillery is successfully detected and destroyed in firing positions. The fire impact from the Russian side has already led to a sharp reduction in the artillery fleet, and Italian equipment will not be able to change this situation.

Thus, once again a foreign state promises to provide combat vehicles to the Kyiv regime, and again such assistance has specific features. Italy is ready to transfer several dozen self-propelled guns, but we are talking only about obsolete M109L, which have long been withdrawn from service. In the case of modern PzH 2000, such generosity is not shown.

As a result, quantity has no chance of turning into quality, and the impact of the enemy in the face of the Russian army will lead to certain results. However, Rome has a fairly large stock of M109L self-propelled guns, and can once again share them. Although the results of this will again be predictable.