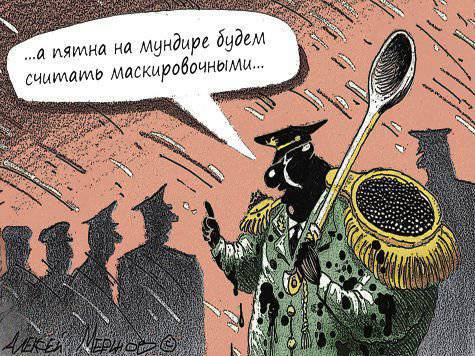 Talking about corruption in our country has become like something inseparable from ordinary life. And the phrase “fight against corruption” itself has already become so worn out and faded that not everyone has a desire to discuss this topic, since the anti-corruption cart still remains in the same place. However, the other day there was a reason to return the attention of Russians to the problems of combating corruption schemes. And the reason turned out to be more than remarkable, because the information about the strangeness of financial activity did not manifest itself at all in relation to a certain local official or traffic police inspector, but to the highest levels of power. We are talking about the corruption scandal that had gained momentum in the camp of one of the most blind ministries in Russia - the Ministry of Defense of the Russian Federation.

The embezzlement of army real estate on a large scale surfaced after it was decided to conduct an audit of the economic activities of the Oboronservis company, which is directly related to the country's defense ministry. The representative of the RF IC Vladimir Markin said that the investigators had initiated several criminal cases at once on the facts of fraudulent schemes during the operation to sell the shares of the Oboronservis company, as well as the land fund and various kinds of buildings and structures.

Among the controversial operations carried out through the Oboronservis company, several stand out at once: the implementation of the State Design Institute, several buildings and a land plot in Moscow, and frauds with the land fund of the Ministry of Defense in the Krasnodar Territory. Transactions were conducted in the form of resale of real estate objects to affiliated companies at clearly reduced prices. The same, in turn, realized the objects at market value, which led to a “slimming down” of the military budget, no less than a billion rubles for 3.

At the same time, it is impossible to say that the UK learned about such a large-scale fraud only yesterday. In particular, the former head of the press service of the main military department of the country, Anatoly Baranets, states that Bastrykin decided to "cut the abscess," which had been filled over the past few years. By the way, Baranets proposes even to award the head of the Investigative Committee of Russia with a medal for starting such a high-profile case.

However, many experts believe that the merit of Bastrykin in initiating criminal cases about corruption mechanisms in the work of the Ministry of Defense is, in fact, minimal. There is an opinion that the criminal cases initiated by the Russian IC are a kind of tool for putting pressure on Anatoly Serdyukov. They say that in this way they are trying to merge the current minister of defense, who, to put it mildly, does not enjoy serious popularity among the troops. But if such an opinion is really close to the truth, then who could have initiated the investigation of the high-profile corruption scandal in the Ministry of Defense?

Several names are called: allegedly such a person could be someone from the three Rogozin-Ivanov-Kudrin. And the name of Kudrin here looks quite so fantastic. Why Kudrin? Many experts are strangely convinced that right now the top leaders of the state suddenly remembered “Kudrin's prophecy,” when he said that budget money was better to ram into reserve bales and to abandon ideas of large-scale modernization in the army. Then these words of Kudrin ridiculed, but now everyone allegedly “changed their mind” and decided that Alexei Leonidovich literally showed himself as a new Wang and predicted financial problems, you understand, through the allocation of funds for rearming the army and increasing the money allowances of servicemen. If so, then maybe Kudrin himself will be put instead of Serdyukov in the chair of the defense minister ... Shilo on soap ...

If we consider the initiative to verify the activities of Oboronservis by Deputy Prime Minister Dmitry Rogozin or the head of the presidential administration, Sergei Ivanov, here everything looks more plausible. After all, the opposite of views on the rearmament of the Russian army in Rogozin and Serdyukov was manifested with enviable regularity. To be honest, in general, recently it would be difficult to hear information about the synchronization of the positions of these people, who should be responsible for the modernization processes in the Russian army. Where Rogozin said “yes”, Serdyukov, quietly inserted his “no”. Where Rogozin stated the need to conclude contracts for the supply of weapons with Russian manufacturers, Serdyukov calmly said that we would rather buy weapon foreign model, although the overwhelming majority of military experts often argued that many of the weapons acquired by the Ministry of Defense abroad lose in quality to their Russian counterparts.

Sergei Ivanov is called the possible initiator of the counting audit of one of the enterprises operating under the wing of the Ministry of Defense, because he allegedly harbored a certain unfriendliness towards Serdyukov as his replacement in the main military department.

However, as is well known, Anatoly Serdyukov is a shredded loot, and could the opinion of even all three of the above mentioned people influence the SC to start office work on people who were close to the current head of the military department? At least, Vladimir Putin himself repeatedly repeated the words that the horses at the crossing do not change, and this led to the fact that Serdyukov, in spite of any perturbations, came out dry in any situation. Even after a series of scoldings by Dmitry Medvedev when he was the Russian president, and his requests to fulfill instructions, Anatoly Serdyukov sometimes muttered something unintelligible in response, even boasted of the possibility of resigning “on his own,” but rarely led to.

This time it looks more ticklish. Besides the fact that Oboronservis turned out to be in the epicenter of the scandal, the facts of a certain clan system in the Ministry of Defense came to the surface. More precisely, this clan system was traced earlier, but only to talk about it publicly, if someone decided, then he was quickly shown a vertically stretched index finger pointing to his lips. The fact is that one of the main defendants in the case related to the embezzlement of the Ministry of Defense funds is the former head of the department of property relations under the department, headed by Mr. Serdyukov, Yevgeny Vasilyeva. Her and a number of other "daughters of the regiment" Anatoly Serdyukov put on the general's posts in the Ministry of Defense. Many ladies were brought by Serdyukov from his past work, as is customary in our politics. Arboretum blossomed wildly and, as it turned out, not always within the framework of current legislation.

It is noteworthy that when the investigators came to “visit” Vasilyeva, they found another guest in her apartment, whom he himself was Anatoly Eduardovich Serdyukov. So what he did in the apartment of his former subordinate remains a secret behind seven seals ... Perhaps, before the arrival of the investigators, he decided to punish Mrs. Vasilyeva as an ex-head for punishing the fraud and denigrating his immaculate ministerial name ...

As a result, after witnessing the fact that the minister was in the apartment of the main person involved in an especially large-scale fraud case, Anatoly Eduardovich was simply forced to go to Novo-Ogaryovo. The meeting was listed as unplanned, and could it have been planned? Of course not. Yes, and in the diary of the head of state could hardly appear the line "to meet Serdyukov, who will arrive from Vasilyeva after visiting her apartment by the investigators." Although, what the hell is not joking ... If it was, then, it turns out that the current minister really has a grand plum that will be seasoned with corruption piquancy ... But Anatoly Eduardovich, apparently, is driving this thought away from him, because until now any scandal associated with his name, strangely faded out and faded away.

This time, the situation can also turn into the plane of the swampy bed of Russian justice. Evgenia Vasilyeva and other “fighting friends” of Anatoly Serdyukov, implicated in corruption scandals, can get real terms and dismissal from all posts, but the minister himself may well get away with it. They say he is not guilty, they themselves traded the land in the wrong direction and at the wrong prices ... As a result, the court will, of course, decide everything, but for now the Minister of Defense declares that he personally follows the situation with Oboronservis. But this is understandable. The main thing is that the same situation was closely monitored by the investigating and judicial authorities, and then in our country, as it happens: sometimes the virus fights the video evidence of the crime, then the mice in the courthouse with whole volumes eat criminal cases ...