Serbia and NATO: woe to the vanquished 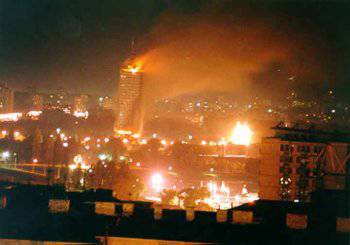 Karel Schwarzenberg, First Deputy Prime Minister and Minister of Foreign Affairs of the Czech Republic, a country that had long recognized Kosovo’s independence, finally gave a clear definition of what everyone knew or guessed, but were afraid to speak out loud. Serbia is a country that suffered a defeat in the war with NATO. Now Western policy towards Serbia is determined by this fundamental starting point: the side that lost the war must pay the winner with resources and territories ... As they say, vae victis - the conditions are always dictated by the winners, and the vanquished must be prepared for any tragic turn of events. Schwarzenberg is extremely frank: “There is nothing new here. All is well known for a long time. Serbia must make progress on the Kosovo issue ... Everyone knows the conditions, there can be no concessions. I can only advise Serbian friends to make a clear decision and agree that it cannot be changed ... Serbia has lost the war. And in war, territories are often lost! ”(1)

Karel Schwarzenberg (born 1937) is one of the most influential politicians in Europe. Schwarzenberg - the oldest Austrian genus, known from the XII century. The most famous Adolf Schwarzenberg, field marshal, imperial count, in 1599, defeated the Turkish troops in the battle at the Rab fortress - it was the first victory over the Turks in Europe. And the current cohort of the European ruling elite, to which K. Schwarzenberg belongs, does not object to the idea of ​​giving the Balkans to Turkey "to be devoured." Karel Schwarzenberg spent many years in Austria and Switzerland, because the Schwarzenberg family had to leave after 1948, because their family was considered a symbol of German influence (more precisely, oppression) and feudal terror. After the suppression of the Prague Spring 1968, he actively took the side of the Czechoslovak dissidents, and between the 1984 and 1990 years. headed the International Helsinki Committee, his duties included registering human rights violations in the countries behind the Iron Curtain. Under President Václav Havel, he became the head of the office of the head of state (1990-1992). Among other things, Karel Schwarzenberg is considered the richest Czech politician, calls himself a Central European resident with a Swiss passport (Schwarzenberg already in the Middle Ages had Zurich citizenship, and Karel also has a Czech). Today, Schwarzenberg is the leader of the right-wing TOP09 party, which is a member of the ruling government coalition. 20 October this year. First Deputy Prime Minister of the Czech Republic and Foreign Minister Prince Karel Schwarzenberg made a policy statement as a candidate for the presidency of the Czech Republic ... (2) So are representatives of the oldest German ruling families of Europe, now acting as agents of expansionist projects that drive the peoples of Eastern Europe into poverty and lack of power, dictate the conditions of the winners to Serbia.

In this aspect, the five rounds of negotiations between Belgrade and Pristina (2011 in March-July) sponsored by the EU with US support are not even negotiations as such, because the Kosovo regime did not make any concession. This type of bilateral meetings in a narrow circle through international mediation (more precisely, guiding control) is rather a refinement of the conditions of post-war surrender of the Republic of Serbia. Why should the “three points” (Serbia’s recognition of acts of Pristina registry offices, personal documents and university degrees) be fulfilled? They have no settled legal status, are unconstitutional, not ratified by the Serbian parliament, and even not legally issued at all? And also the “agreements” added to them about the representation of Kosovo in international forums as an independent state and “integral” border management (which the West and Pristina unequivocally interpret as state borders)? We emphasize: these are unequal agreements, these are acts of unconditional and unconditional surrender, only extended in time after the defeat of Serbia.

In the new negotiations of Belgrade and Pristina the same line will be drawn with even greater rigidity. The NATO Center for Strategic and International Studies (Center for Strategic and International Studies) back in November 2011 in its report indicated the need to transfer the future Belgrade-Pristina dialogue from the “technical” to the political level with the achievement of specific results. Such items were proposed as the inclusion of issues on the north of Kosovo and the “border of Serbia - Kosovo” in the agenda; emphasis on “restoration” and ensuring the territorial integrity of Kosovo; conducting a general campaign to increase the international recognition of Kosovo, starting with five EU countries that have not recognized Kosovo; transition from "international supervision" to "development of the country"; the completion of the EULEX European Mission and the transition to the stage of functioning of the EU High Representative (EU special representative - EUSR), working in close contact with the US Embassy in Pristina; inclusion of Kosovo in the visa liberalization process; the beginning of negotiations with Kosovo on the signing of the Stabilization and Accession Agreement with the EU with the proposal of Pristina of the “road map” to the status of a candidate. (3) These items are systematically implemented, regardless of who is currently in power in Serbia.

Nigel Ferridge, the representative of the United Kingdom at the European Parliament, says: “All politicians in the Balkans are only doing someone’s tasks ... but the key issues are decided in Washington and Brussels, not in Belgrade ... and I find it funny when they ask me when the New World Order comes. Because he came a long time. Good or bad - look at the global situation. Is everything normal or is everything falling into the abyss? Decide for yourself. Serbia before the abyss! Serbian politicians are very intimidated and nervous, they don’t know where to get money ... The problem is that Serbian politicians do not take the trouble to solve something, they just ask Washington and Brussels what to do next instead of doing something themselves . Maybe the north of Kosovo will be Serbian. But hardly". (4) Daniel Server, for his part, indicates that Belgrade must take the responsibility of integrating the north of the province under the rule of Pristina, but "now we need to give the Belgrade authorities time to assimilate this idea." (5)

Meanwhile, Pristina sold the entire regional electricity distribution network of the Electroenergy Campaign of Serbia, serving 400 thousand users, to the Turkish concern Chalik and Limak for 26,3 million euros. (This fact was ignored by Serbian Energy Minister Zorano Mikhailovich, who did not hesitate to cause an international scandal and go for a one-way replacement of documents at the time of signing the Serbian and Russian gas pipeline contract. Moscow described the incident as a “scandal” (6)). Wesley Clark, the former commander of NATO forces in Europe, and now the head of the energy corporation Enviditi from Canada, requires a license for his company to research mineral deposits in Kosovo in order to produce synthetic oil from coal. The fact is that 76% of Serbian coal reserves (16 from 20 billion tons) are in Kosovo - these are the largest and most economical coal reserves in Europe in terms of their development. However, the production of oil from coal is a rather dirty technology that infects the environment, especially water. Nevertheless, the company Wesley Clark intends to produce 100 thousand barrels of oil per day. (7) The Albanian (Pristina) Privatization Agency has already illegally privatized a good half of 1 358 Serbian enterprises in the province, and without the consent of the owners. And this is euro billions! (8) And all these multibillion-dollar losses are not indicated in any way at the negotiations that have already begun in Belgrade and Pristina.

While I.Dacic is in talks with H.Tachi, the leaders of the Serbs of the north of the region (and they are the full party to the negotiations) refused to recognize the so-called. agreements on “integral border management” by sending a letter to the president and prime minister of Serbia and demanding to meet with them and familiarize them with the “platform for Kosovo and Metohija”. However, they are not heard in Belgrade yet. In general, the beginning of negotiations is characterized by complete unpreparedness of the Serbian side and therefore more like the surrender of positions in the "remote control" mode. That is, NATO’s military aggression against Serbia now has to be supplemented with withdrawal of a part of the territory and resources of this country as a contribution. However, the “winners” are still far from confident in the tacit agreement of the Serbs with the “legalization” of the withdrawal of Kosovo and Metohija. In the international legal aspect, the problems of the allies of Serbia remain Russia and China, they hold on, the north of the region does not surrender, and the overwhelming majority of Serbian voters voted for Tomislav Nikolic in the hope of changing the policy of Belgrade, primarily in the Kosovo issue.

Official, according to the canons of international law, the recognition by the Serbian authorities of the “independence” of the territory that was torn away from it by force of territory will be absolutely irreversible and destructive for the state existence of the Serbian people.