American "Hunter" for the Russian Isami 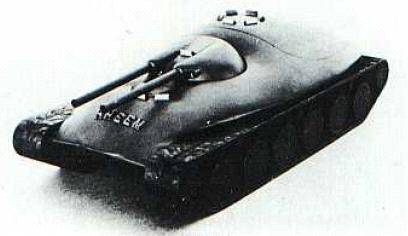 Immediately after the end of World War II, the United States was extremely impressed with the Soviet heavy tanksFirst of all, IS-3, active development of a promising post-war heavy tank began. Many developments were promising and gave rise to a number of very interesting, and in many ways futuristic projects.


Among them were, for example, tanks with a nuclear power plant, super-heavy articulated tanks weighing 150 tons, as well as a number of even more extravagant design solutions, the bulk of which remained on paper.

In reality, as a response to the Soviet heavy tanks, only the heavy tank M-103 of the classic layout entered small-scale production.

Quite interesting projects of tanks with powerful weapons, caliber 120 and 155 mm equipped with mechanized charging (Т57, Т58) were developed. Such tanks corresponded in their level to the Soviet tanks EC-7, developed in the same period. It should be noted that the consideration of projects of promising tanks in the United States took place with the participation of a wide range of specialists at scientific conferences organized in Detroit Arsenal held under the name "Question Mark". Such conferences allowed developers to exchange views and sift out dead-end solutions and exchange experiences. A limit of 50 tons for heavy tanks was established, the possibility of creating a highly protected tank in such weight limits was justified.

Interesting page stories American tank building tank "Hunter", in translation - "Hunter". The development was entrusted to Rheem manufacturing company. Contract development began in 1953 and the final draft was presented in 1955.

Features of the project - combined armor, automated charging for two stabilized 105 mm guns firing active-reactive and 2-two paired machine guns. The guns were rigidly attached to the tower and equipped with automatic loaders for seven shells each, which could be produced with a rate of fire of up to 120 rds / min. The guns were equipped with automatic charging on 7 shots for each. The replenishment of the machine guns was done by the loader, the total ammunition load was the 94 shot. In one version of the project, the commander was supposed to get a turret with two 12,7-mm machine guns. As an alternative, it was intended to use the commander's turret without machine guns or the standard turret M1 from the tank M48A1. The rising roof section restricted the shelling angles of the 200 ° tower. Full circular fire was possible only at the angle of elevation of the guns in 20 °. The tank was equipped with an optical rangefinder, which increased the accuracy of shooting.

Reservation of the tank - combined with a silicate filler, the hull and the tower had rational angles of inclination, the tank had a low silhouette, high anti-cumulative resistance was provided. The estimated mass of the tank according to the expectations of the developers should have been up to 40-45 tons. It is noteworthy that composite armor was used in the project - at that time research was going on to improve protection against cumulative ammunition, and one of the solutions was the so-called “glass” armor or “siliceous core”. With an actual thickness of 6,5 inches (165mm), the armor consisting of three layers gave the same protection as the same thickness of the monolith, but weighed as the whole 4,6 inch (117mm). The front parts of the hull armor and the Hunter Tower were supposed to be made from such armor, increasing their stamina.

The mobility of the tank was provided by the engine AOI-1490-1 power 647 hp and hydraulic transmission. The latter excluded mechanical transmission; instead, 12 hydromotors operating on each of the road wheels were used. This allowed the use of lightweight rubber tracks, collected from 2-x sections. Such a running gear allowed the tank to move even after losing a track and several road rollers. As a backup option, a transmission XT-500 and a standard propulsion unit were proposed.

The layout of the tank was unconventional and offered a number of advantages in terms of security, mobility and firepower.

The crew consisted of 4's. The driver was located in the front of the building, followed by the gunner in the single-seat tower. The commander and loader, whose tasks included the replenishment of automatic loaders, located behind the tower. The engine compartment was located at the rear of the hull. The roof of the hull behind the commander and loader seats was hinged at the level of the commander's tower and lifted by means of a hydraulic drive. This allowed the crew to quickly leave the damaged car, and also facilitated the maintenance of logistics. 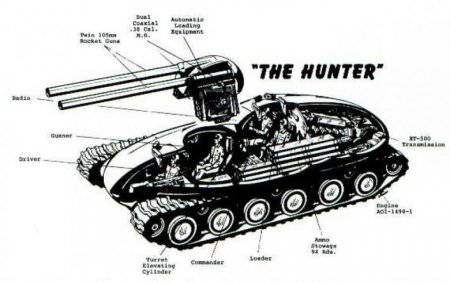 Despite a number of innovations, “Hunter” did not receive development - the military fashion of that time paid more attention to aero-transportable tanks, such as the Rex or combat vehicles created under the ASTRON program. As a result of the decision on the full development of "Hunter" has not been followed.

Ctrl Enter
Noticed a mistake Highlight text and press. Ctrl + Enter
We are
The fire control devices of the Soviet and German tanks of the Second World War. Myths and RealityTwo in one: articulated tanks
19 comments
Information
Dear reader, to leave comments on the publication, you must to register.