October 26 2012
175
Autumn 1936 of the year. Republican bomber aircraft appeared in the Spanish sky. They were intercepted by fighters - German Messerschmitts and Spanish Fiats. Few could have imagined that the bombers, having gained speed, would leave the enemy. History I have not yet known such a case, and this put an end to the complete supremacy of the fighters in the sky. Republican bomber planes were Soviet aircraft developed by the Tupolev Design Bureau and called the SB - a high-speed bomber.

According to the task assigned to the Soviet designers, it becomes clear that the future bomber will be an unusual machine - the number in 330 km / h for the speed of the new machine was spelled out in the TTZ, while at that time the maximum speed of the aircraft was in 270 km / h ( 1933 year). It is possible to understand military pilots - for any aircraft, high movement speed in combat is the most important component, and for overloaded bomber aircraft - in general, the ultimate dream.

A high-speed bomber was planned by a front-line bomber, for joint operations with other types of army troops. Since bombers could not always accompany cover aircraft, they had to become a full-fledged combat air unit — perform basic missions, defend themselves with established machine-gun armaments and, if necessary, escape from the enemy at high speed.

When approaching the assignment, modern capabilities of the Soviet aircraft industry were evaluated, so it was not by chance that the famous aircraft designer A. Arkhangelsky was instructed to develop a new high-speed bomber. It was he who headed the slightly earlier project of a monoplane fighter in a twin-engine version, which had a high speed of flight.

The high-speed bomber was designed according to the scheme of a self-supporting monoplane, covered with a smooth skin and provided with retractable landing gear. The first prototype was ready in the 1934 year, and in early October it first rises into the sky. The two air-cooled M-25 engines installed were able to accelerate the bomber to 325 km / h. And in early December, the second prototype rises to the sky, on which the more powerful M-100 motors are already installed. On tests, the bomber reached a speed of 424 km / h at an altitude of about 4 kilometers. The maximum lifting height of the bomber was almost 10 kilometers. 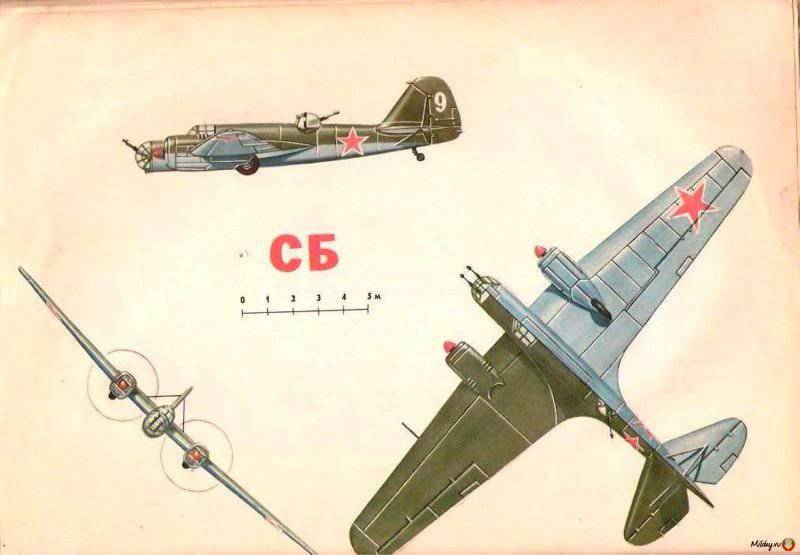 The SB bomber reaching high speeds brought the first, previously unknown problems called flutter. The theory of a new type of vibration was urgently developed, which allowed many Soviet aircraft to avoid difficulties in the future. Bomber finalized according to new calculations. This high-speed bomber and was put into mass production.

It was the serial SSs that were delivered to the Republican Air Force, they changed the whole theory of the combat use of bombers, and made the enemies shudder at the sounds made by the bombers in the sky. Soviet designers and engineers closely followed the combat use of the bombers, and made changes or modified the modifications of the Security Council. Production of the Security Council and its modifications continued until the middle of 1941 year.

1937 year. The SS receives enhanced M-103 engines and sets a world record for lifting cargo to a height - one ton of cargo was lifted to a height of 12.24 km.

1938 year. Serial bomber SB start producing engines M-103. Increased bomber payload to one and a half tons. In addition, the bombers get the screws with variable pitch, reduce the overall aerodynamic resistance of the bomber, using tunnel radiators in cooling engines. The maximum SB speed increases and is 450 km / h.

Germany starts fighting and victoriously walks across Europe. Soviet designers are tasked with creating a front-line combat bomber — a diving bomber. A bomber capable of delivering accurate bomb strikes at high speeds was required. The new modification of the Security Council with the new engines VK-105 is called AP-2. He had a speed of up to 480 km / h and climbed to a height of 10 kilometers. 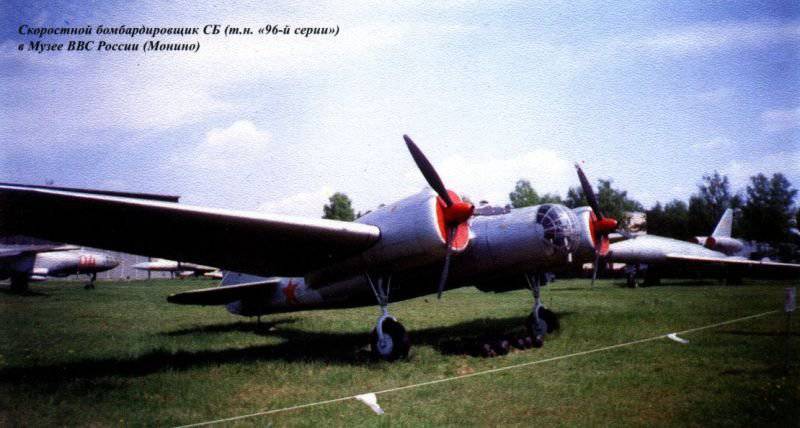 At the end of the 1930 — ies, for the first time, an aircraft in the Soviet Union appeared that had an unconventional solution — a nose-landing gear with a wheel. This scheme of the aircraft landing gear later became standard for the following aircraft. The SB bomber became famous not only for being the first, but also for the fact that many design solutions, units and capabilities began to be used on almost all of the following aircraft:
- clean aerodynamic shape;
- Maximum compression of the fuselage;
- tight installation of equipment;
- smooth and lightweight dural lining;
- the use of very durable aluminum alloys;
- the use of alloy steel;
- chassis cleaning type;
- Chassis and wing hydraulics;
- screw adjustable pitch. 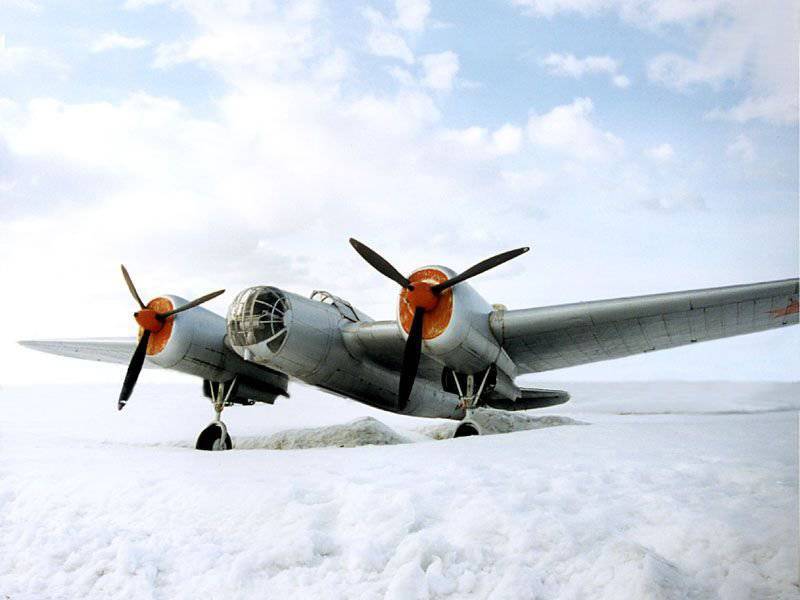 Modifications of the bomber came out systematically and differed mainly installed engines and their nosing, standard armament and onboard equipment. The last of the SB modifications, the Ap 2, was a deeply upgraded high-speed bomber that was able to bomb at high speeds in a pick. The total number of serial bombers of the SB series is the 6831 aircraft.

Combat use:
The SB was used in battles on the territory of Spain, China, Lake Hassan, at Khalkhin-Gol, Western Ukraine, Bessarabia, Belarus and Finland. The SBs were handed over to Czechoslovakia and were issued there under a license; they were used as part of the Bulgarian and even Finland air forces (trophy).

At the beginning of the Second World War, the bombers were already outdated; the Pe-2 went to replace them. However, by the beginning of the fighting, the SAT and modifications accounted for more than 70 percent of all front-line bombers. The approximate number of all modifications of the Security Council in the ranks of the Soviet Air Force mid-1941 year - 3.5 thousands of aircraft. They were armed with 27 regiments that ensure the security of the western border of the Soviet Union. In the early days of the war, about 1200-1300 bomber SB series were lost. 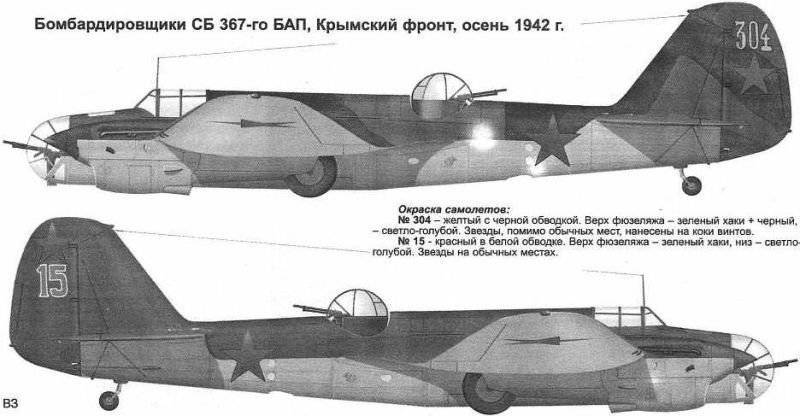 In 1943, the SB bombers began to be systematically replaced by aircraft with the best characteristics of the Pe-2 and supplied by the allies Mitchells and Boston. In 1944, they were joined by the Tu-2. SB, withdrawn from service, but not completely retired, and used as a sufficiently high-speed transport carriers and communication aircraft.