The greatest battle in the world ... that everyone has forgotten 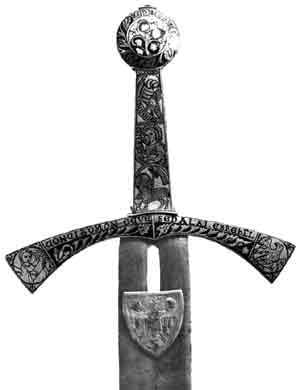 In the spring of 1399, in a few weeks Kiev, exhausted by horde raids, turned into a huge, many thousands and multilingual camp. Inspired by the victory of the Russians on the Kulikovo Field, military squads from all Eastern and Central Europe converged here.

Iron battens gleamed in the sun, one could hear the neighing of huge horse herds that quenched their thirst off the shores of Slavutych; the warriors sharpened their swords.

Even the Crusaders came, and the Kievans were surprised to see the outlandish armor of the knights, who had never gone so far into the Slavic lands before.
A few months later a terrible tragedy occurred ...

.... Only one small detachment of horse warriors escaped death after a terrible battle camp. They fled, and “Tatars, following them, are chasing, secting five hundred versts, pouring blood, like water, to the city of Kiev”.

So Nikon's chronicle mentions about the fierce battle that took place on the bank of the quiet Ukrainian Vorskla River more than 600 years ago, 12 August 1399 of the year. Details of the battle covered with the darkness of the centuries, almost all the ancient Russian warriors fell on the battlefield. This battle is not mentioned in school textbooks, the exact place where it took place is unknown.

One can only guess about the number of its participants. The great Lithuanian prince Vitovt, who led the general squads of the Slavs, Lithuanians and Crusaders, the one who commanded the combined army in the famous Battle of Grunwald, led the force, “the great zelo”; there were only fifty princes with him.

But in fact, in the famous Kulikovo Battle (1380 year), all the 12 princes with fighting squads took part! The famous Polish historian P. Boravsky claims that the battle on Vorskla was the largest in the fourteenth century! Why is so little known about this grandiose event?

First of all, there are practically no eyewitnesses, since everyone died in this fierce Sich (as the Ipatiev Chronicle claims). And secondly, it was a defeat - a terrible, bloody! We didn’t like to write about such people ... Bit by bit from the Russian chronicles and the works of Polish historians, we’ll try to figure out what happened after all in the hot summer of 1399? .. 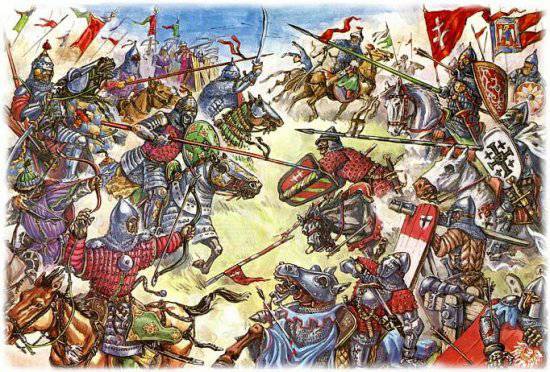 Six hundred years ago, Kiev was a small city that was part of the Grand Duchy of Lithuania. A few residents engaged in the usual craft and trade in the once mighty capital of Russia, just beginning to recover from the Tatar-Mongol raids. Life was warming mainly in Podol and in the Pechersk Lavra region. But in the spring of 1399, as we already know, the city was transformed.

It heard the speech of the Slavs and Germans, Lithuanians, Poles, Hungarians ... Troops from many European states and principalities gathered here. A huge army, consisting mainly of Ukrainian, Russian and Belarusian regiments, marched from Kiev on May 18.

It was headed by the princes Andrei Olgerdovich Polotsky, Dmitry Olgerdovich Bryansky, Ivan Borisovich Kievsky, Gleb Svyatoslavovich Smolensky, Dmitry Danilovich Ostrogsky and many other princes and governors. The Commander-in-Chief was the Grand Duke of Lithuania Vitovt.

Next to it (fanciful bends stories!) there was the same Khan Tokhtamysh, who united the Horde for some time, managed to burn down Moscow, but soon he himself was thrown off the Khan's throne by formidable Edigey. With the help of Vitovt, Tokhtamysh intended to regain the khan's throne and also led a squad with him.

On the side of Vitovt, there were about a hundred heavily armed knights-crusaders who came from Poland and German lands. With each crusader went several squires, armed no worse than knights. But most of the soldiers were Slavs, gathered from almost all corners of Russia. In general, Slavic lands occupied 90 percent of the entire territory of the Grand Duchy of Lithuania, which was often called Lithuanian Rus.

The Slavic squads, remembering the glorious victory on the Kulikovo Field, expected once and for all to put an end to the Tatar-Mongol yoke. The army was armed even with artillery, which appeared not so long ago in Europe. The guns were quite impressive, although they fired mainly stone cores. Thus, six hundred years ago, the roar of guns was heard for the first time on the territory of Ukraine ...

On August 8, the combined forces met on Vorskla with the army of Timur-Kutluk, commander of the Golden Horde khan Edigei. Self-confident Vitovt put an ultimatum demanding submission. "Conquer yourself also to me ... and give me every summer a tribute and a tribute." Ordyntsy, waiting for the approach of the allies - the Crimean Tatars, themselves put forward such a requirement.

12 August battle began. The army of Vitovt crossed Vorskla and attacked the Tatar army. At first, success was on the side of the combined troops, but then the cavalry Timur-Kutluk managed to close the encirclement, and then it began ... In a close hand-to-hand battle, artillery turned out to be impotent. Most of the princes and boyars died, "the very Vitovt running in the mala ..."

The heavily armed Crusaders also fell, not resisting the Tatar sabers. In pursuit of a small detachment of the miraculously rescued Vitovt and ruining everything in their path, the Tatars quickly approached Kiev. The city endured the siege, but was forced to pay "a payback of 3000 rubles in Lithuanian and more 30 rubles from the Pechersky Monastery." For those times it was a huge amount.

So, it was not possible to get rid of the Tatar yoke in that age. The defeat seriously affected the statehood of Lithuanian Rus; Soon, the weakened Vitovt had to recognize its vassal dependence on Poland. After the Battle of Grunwald (in which, by the way, 13 Russian regiments from Galich, Przemyshl, Lviv, Kiev, Novgorod-Seversky, Lutsk, Kremenets) participated, his position somewhat improved; he even wanted to be king, but he could not counteract the influence of the Polish king Jagiel. Vitovt died in the 1430 year, and the Poles moved to Russia ... And if the outcome of the battle at Vorskla was different? ..

Sadly ended this battle. Not a single monument, not one obelisk on the glorious Poltava land reminds of it ... military historians tie the battle on Vorskla to the Lithuanian-Polish campaigns, but the main body of the army was Russian. "Fifty Slavic princes from the squad"!

Their death was shattered by all subsequent generations of descendants of the legendary Rurik. After a few decades, neither the princes of Ostrog, Galician, Kiev, nor Novgorod-Seversky became. Numerous descendants of Vladimir the Holy, Yaroslav the Wise, as if dissolved, disappeared on our land ...

Cold-blooded Swedes do not forget their soldiers who were killed near Poltava - and the monument stands, and flowers are brought every year. The British, having fallen under the deadly fire of Russian artillery and having suffered a bloody defeat in the 1855 goal near Balaclava, often come to visit the graves of their ancestors who fell in the distant Crimea. A magnificent white monument to English soldiers towers in the very center of the grape field.

Workers wine farm periodically tint it, and the tractor carefully bends around during the spring plowing. Nearby, on the highway - an obelisk, opened in 1995 year. But after all, Poltava is located at a distance of one and a half thousand kilometers from Sweden, Balaklava - and further from England. And here, very close, in the Poltava region lie in the ground the remains of our compatriots, and there is not a single memorial sign, not a single cross where, presumably, more than a hundred thousand soldiers died!

There is something to think about and why we, the descendants, will be ashamed ...