Nobody talked about the modernization of 800 T-62 tanks: how an elephant was blown up from a telegram post 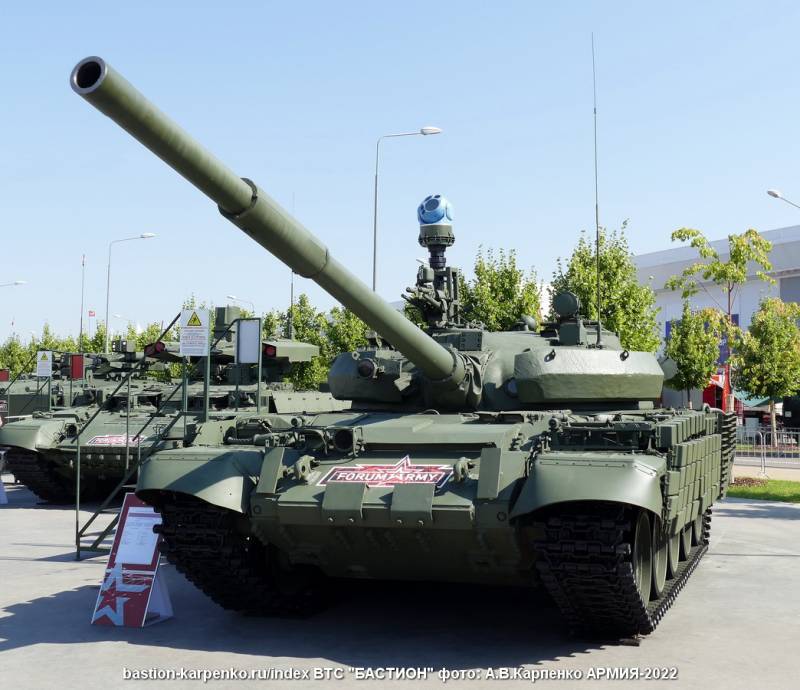 You know, there is such a well-aimed saying in Russian: “I hear a ringing, but I don’t know where it is.” It should be noted that it very clearly characterizes the current media and bloggers who are chasing this very information, often simply copying it from each other. For example, we can take from nowhere appeared news that the T-90M is equipped with a cannon from the "Armata" - we have already analyzed this in detail here. And now a new trend has begun: “Russia is modernizing 800 tanks T-62. In fact, these are the next ideas that flooded the network. However, as well as rumors that the tank modernization project was being developed in an emergency mode due to a special operation.

Unlike the reports about the Armata cannon on the T-90M, the source of the news about the horde of 800 modernized T-62 tanks is quite obvious. This is the official telegram channel of State Duma deputy Andrey Gurulyov. It is noteworthy that the post in the "cart" did not carry any lies - everything is told and shown as it is. This was already figured out.

Recently, the 103rd armored repair plant, located in the Trans-Baikal Territory, received a very large order for the repair and modernization of armored vehicles, in which the number really appeared - 800 units, but not only T-62s. Gurulyov, as a former deputy chairman of the government of the Trans-Baikal Territory, and part-time also a general, decided, as they say, to figure out on the spot what the plant and its employees lack, how to help, and so on. Well, of course, he went there. After that, a post appeared in his channel.

Gurulev's visit to the 103rd BTRZ. Screenshot from the video in the telegram channel of Andrey Gurulyov
It features two videos in which T-62M towers and hulls flash by, and the deputy himself talks with factory workers about problems and losses of equipment, and also, in particular, notes positive reviews about these tanks from the fronts of the NVO and calls, as they say, to tighten up and "give the country coal." But there is also a text, which, apparently, they seized on.

“... The enterprise works in two shifts, it is ready to work in three, we need help in this, it will not work out otherwise, there is a lot of work. Today, the entire industry is mobilized, because the plant cannot work alone - we need suppliers who supply spare parts, this comes from all over Russia. Tanks are not just being repaired, but modernized. The same The T-62 will be equipped with modern thermal imagers, night sights, and the protection, hinged armor, protection against javelins, and aft protection against grenade launchers will be overhauled. With a modernized machine, it will be possible to show worthy on the battlefield, because we still have to fight for a long time ... "
That is, as we can see, Gurulev says that the armored vehicles arriving at the plant will not only be repaired, which is quite logical if we are talking about re-mothballing, but also modernized. As an example of modernization, he cites the same T-62s. There is no information that all 800 cars will be “sixty-twos”, no. They were simply singled out by the deputy from the total mass of tanks and other equipment as an example of the fact that the plant not only repairs equipment, but also improves its combat characteristics.

They correctly understood this information, for example, in the Kommersant newspaper:

"... The State Duma deputy of the Russian Federation did not specify which models of tanks were being repaired, mentioning only the T-62, which will be retrofitted with "modern thermal imagers, night sights", as well as enhanced protection - "mounted armor against javelins."
Rossiyskaya Gazeta, which is the official mouthpiece of the Russian government, reacted a little more extensively, but in the right style. They did not talk about almost a thousand modernized T-62s, but they considered in great detail (within the framework of the publication format) a possible option for refining these machines.

Well, then ... Then we know what happened. For example, you can take ANNA-News:

“Deputy of the State Duma Andrei Gurulev visited the 103rd armored repair plant in the Trans-Baikal Territory. He said that the enterprise would have to return 800 T-62 tanks to the Russian army from military equipment storage bases.

The deputy Gurulev also said that the 103rd armored plant located in Atamanovka near Chita was loaded with orders for three years. It is during this period that these 800 T-62 tanks should return to service. He explained the need for their return to service by large losses in equipment in the initial period of a special military operation in Ukraine ... "
But really "Russia is upgrading 800 T-62 tanks” is an even more or less mild wording of some headings. Otherwise, their tone changes from a sharply decadent mood and ending with ridicule in the style of "all the tanks lost." But it is worth paying tribute: the majority of the media refrained from this topic, which, of course, is correct. But, having driven in the corresponding request in the same Yandex, you can find a lot of posts of a similar plan.

Indeed, one of the main specializations of the 103rd BTRZ is the repair of the T-62. The company has owned this technology since Soviet times. It is logical that they will be modernized there. However, in addition to these tanks, the company is able to master bringing into combat condition other vehicles, including, for example, tanks of the T-72 type and light armored vehicles. There is no doubt that there are T-800s in the order for 62 units, but their share in this number is by no means one hundred percent - it's just the total amount of equipment, work on which was laid down 3 years in advance. And you can't find anything else in any official source.

The very same modernization of the T-62 did not arise from scratch, but the reason for its initial appearance is far from being a special operation.

Was the T-62 modernization project designed exclusively for the NWO?

First of all, you need to understand that the T-62s have been in the mobilization reserve for almost 11 years, that is, no one sent them to eternal parking. These tanks, mostly located in storage bases in the eastern part of the country, are still maintained in more or less good technical condition. Not all, of course, but a significant amount. For this, the production of new 115-mm cannon barrels was even launched, about which UralVagonZavod reported more than three years ago. There were also references to the production of shells, but information on this matter is now deaf.

And since there are tanks, projects for their modernization will also be proposed. The enterprise that implements it will receive funding, and the machines, if they are not going to be written off, will improve their combat effectiveness.

The 103rd Armored Repair Plant was no exception. The T-62M modernization project, which they are now trying to pass off as created in an emergency mode and designed literally on the knee because of a special operation, actually appeared at exhibitions long before it. 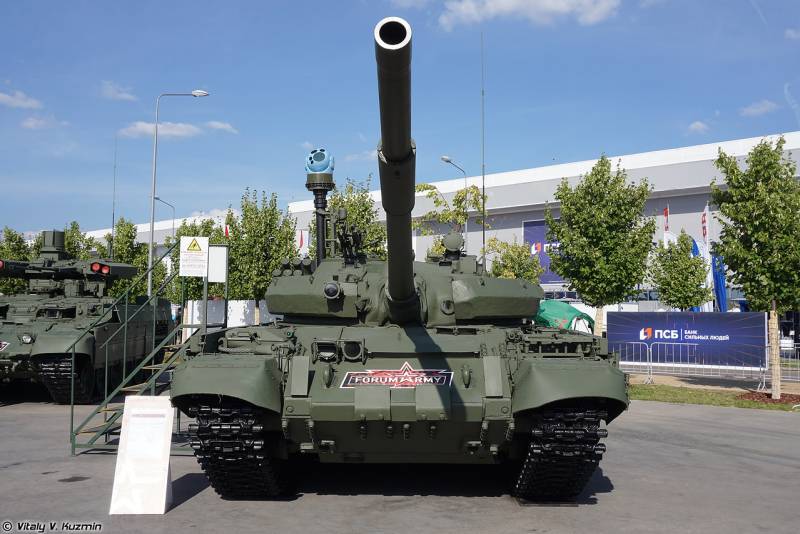 Modernization option for the T-62M from the 103rd BTRZ at the Army-2022 forum
For example, one of the last mentions of a modernized tank from the 103rd BTRZ was in the fall of 2021, when the tank was shown at one of the shows. There is also a mast with a multispectral module in the form of a thermal imager, a near-range IR camera and a laser rangefinder, there is also dynamic protection, and a thermal imaging sight-rangefinder at the gunner. Everything is in the best traditions of any tank factory in any country: to exhibit your new product in the “expensive-rich” style, and then bargain with the customer – it is always profitable to start from the top price ceiling.

As a result, as we can see, the order was nevertheless issued, which to a large extent contributed to the SVO. So far, not a single serial machine of this type has been noticed, but we can say with confidence that the project will be significantly changed. Most likely, they will abandon the mast with a multispectral module - too expensive. In addition to the rest, they will put a “visor” on the roof from the Javelins and equip the frontal projections of the tank with dynamic protection.

There is absolutely no open and reliable information about how many modernized T-62Ms are planned for release. There may be ten units, maybe a hundred, or maybe all two hundred - no one talked about it. But to think out too much and bring this number to eight hundred, it turned out for many. However, as with the modernization project itself, which was allegedly created solely because of a special military operation in Ukraine.

Such dubious news cannot carry anything but unjustified negativity. For some, this is a reason to gloat, they say, Russia has already lost all the equipment, they will soon remember the T-34. For others, it is a cause for indignation.

But there is still a fly in the ointment in this situation. All sorts of positive reviews about the T-62M in the special operation zone are a wagon and a small cart, but in fact the car is already rather outdated. Yes, the modernization, which includes the installation of thermal imaging sights, dynamic protection and other elements, will take the tank to a new level.

However, we have a sufficient number of T-72s at the storage bases, and there are also T-80s. They are revived and put into operation, which, by the way, the 103rd BTRZ will also do. And just thermal imagers and other means would suit them more than the “sixty-two”. We hope that the Ministry of Defense will pay attention to this situation. We need tanks, and it's not just about SVO. Tanks are needed, not the reports of small-town bloggers that metal shells do not burn, and the absence of an automatic loader guarantees the absence of breakdowns.