Ivanishvili told the terrible truth about Russia, or Two of the Georgian casket ... 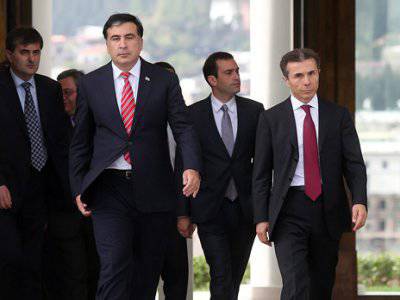 Well, finally ... Now Georgia itself has found out who actually launched the war in South Ossetia in August of 2008. Mr. Polichinelishvi became the herald of this secret of Polichinel .... uh-sorry, Ivanishvili. If until a recent speech by a person who claims to be the Georgian prime minister, that Mr. Saakashvili had unleashed the South Ossetian military provocation, they were known all over the world, today this sacred knowledge has finally reached the unique information authenticity of Georgia itself. .

Bidzina Ivanishvili accused the current president of Georgia that he is the one responsible for initiating hostilities against the Ossetian people. The victor of the recent parliamentary elections said that it was Saakashvili and the former ruling party who were responsible for launching the 08.08.08 military campaign.

It would seem that such words show us Ivanishvili as a person who is sincerely inclined to return Russian-Georgian relations into the mainstream of pragmatism and business partnership. However, today none of the Georgian politicians can limit themselves to accusing only their compatriots, even if they represent a diametrically opposite political flank. But what about the “imperial ambitions” of Russia, and what about the words about the “occupation” of Georgian territories? No need to worry - Ivanishvili’s speech was also this: he did not have time to attack Mikhail Saakashvili with a kite, as soon as his closest political rival Bidzina Grigoryevich “recalled” himself was exposed. According to him, Russia had “a century-long desire to cross the Caucasus Mountains,” and Saakashvili only gave Moscow an excellent reason for this ...

Listening to such words, the heads of the main political forces of Georgia who have flown away from the lips, one involuntarily comes to the conclusion that this Ivanishvili is still a carrot. In principle, no one was going to create illusions about the "silk and velvet" of the new Georgian political elites, but now there is a steady impression that these forces also hold their own people, forgive, for the rednecks, whose representatives can be hung on the ears of any near-political and pseudo-patriotic noodles. For some reason, Bidzina Ivanishvili, in his fiery diatribe about Russia’s many years of desire to cross the Caucasus Mountains, did not mention that he himself had crossed the ridge for a long time, only in the opposite direction. Strange, and how did this “terrible occupying” country (Russia) attract Mr. Ivanishvili so much that for a whole decade he was its citizen and cranked up billions of dollars through the Russian banks he himself founded? Perhaps, in this way, Bidzina Grigorievich tried in every way to prevent the very desired transition of Russia through the Caucasus? But, you know, all his aspirations were instantly destroyed by Mikhail Saakashvili, and the Russian Ivanishvili had to give up his Russian citizenship and take two new ones: Georgian and French. And now this “French-Georgian” exposer of Russia's bloodthirsty plans decided to dot the “i”, throwing a new bait in a large geopolitical lake, in the hope that the catch will be guaranteed.

Analyzing the psychological aspect of Ivanishvili's words, one can say that he decided to try to sit down on two chairs at once. On the one hand, he believes that the words about Mikhail Saakashvili’s guilt will have to touch the Russians to the core, and they will say, but why are we so advocating for the independence of Abkhazia and South Ossetia: they say, a peasant, he denounced the Georgian president, which means , and gave us a setup for friendship ... However, Bidzina G., apparently, forgets that for Russia he invents the bicycle. The fact that Saakashvili has unleashed the war may be news for the Georgian people, and in Russia, as, by the way, in most countries of the world, they knew about this long before they heard the name of Ivanishvili himself.

The second chair is the words about Russia's “aggressive” plans to cross the Caucasus range. This bait is obviously designed for western partners. There, such “accusations” against Russia are very much loved and are ready to give the most generous preferences to those who pour out more dirt on Russian heads. These are specific code phrases according to which the West determines the status of a new foreign politician: friend or foe. Now, of course, Brussels and Washington know: Ivanishvili is his own - the right politician. Saakashvili could also have remained in the memory of the democratic West with his board, if he had brought the matter of democratization of South Ossetia to the end, and did not rush to the ground at the sight of any aircraft during the famous 2008 events. So the West allowed Georgia to hold its democratic elections, when one was merged and the other was elevated - well, let it be that the former Russian, but this comrade is in the money, which means that, if anything, he can also demonstrate some anti-Russian trick. And it already shows ... In general, the second chair of Ivanishvili looks to him to be much more stable, which means that the epic on demonizing Russia in Georgia will be continued.

The West is little interested history other countries, and therefore, on the other side of the border with the European Union, they may even really think that Russia has tried to cross the Caucasian heads for some time there. They will not even understand about the fact that there was a time when Russia itself was ruled by famous comrades who came from the southern slopes of the Caucasus ...

In general, Mr. Ivanishvili plays with marked cards that delight the West with their variegation, instill some ghostly hopes in Georgian citizens themselves, and we, Russians, are given to understand that the total result does not change from the change of places of Georgian leaders. Here it is - Georgian political mathematics.