Rheinmetall showed the layout of the BMP Lynx OMFV 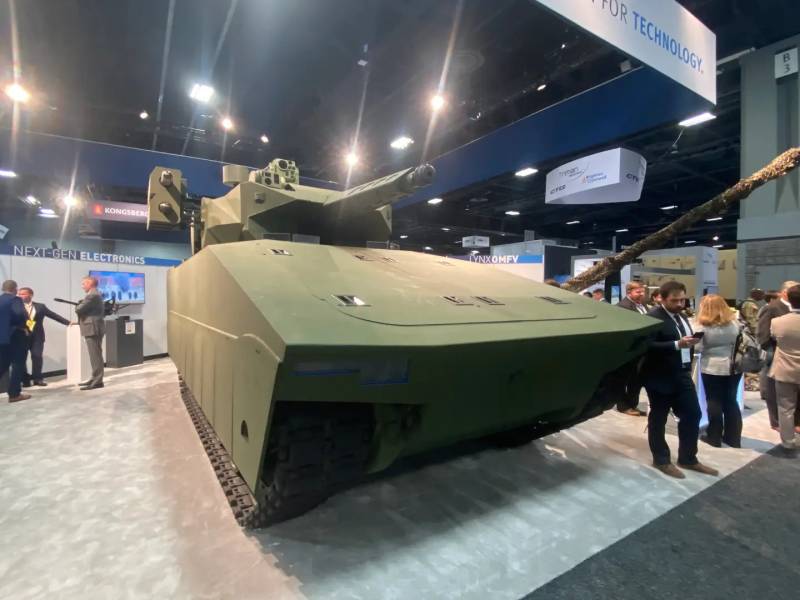 By order of the Pentagon, several companies are developing a promising armored combat vehicle OMFV, which in the distant future will replace the existing M2 Bradley infantry fighting vehicles. One of the participants in the program is the American branch of Rheinmetall. It recently presented a full-size mock-up of its version of the OMFV, based on the well-known Lynx armored vehicle.

The OMFV (Optionally Manned Fighting Vehicle) program was launched back in 2018 under the name Next Generation Combat Vehicle (NGCV). In the near future, the Pentagon planned to receive proposals from potential contractors, and in 2020 they were going to conduct comparative tests of equipment. However, for a number of reasons, only a few applications were received, and the customer approved only one.

In April 2020, the OMFV program was forced to restart, having revised all the tactical and technical requirements. This time the program interested more companies. In particular, the American branch of the German company Rheinmetall again submitted an application. Raytheon, L3Harris, Textron Systems, etc. also participated in his project.

It is curious that Rheinmetall submitted a previously rejected project to the restarted competition without significant revision. She made this version of the "optionally manned" armored vehicle on the basis of the already well-known KF41 Lynx infantry fighting vehicle. It was proposed to supplement the finished chassis with a new combat module and equip it with means for remote control. 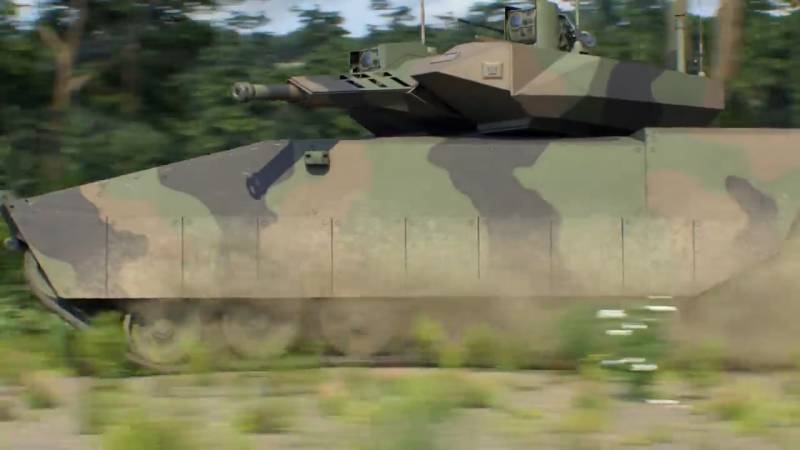 Promising armored vehicle in advertising
In 2021-22 the developer company has published various materials on its Lynx OMFV project several times. However, until recently, only XNUMXD images and other promotional materials were displayed. A new stage in the promotion of a promising infantry fighting vehicle began just a few days ago.

On October 10-12, Washington hosted the annual conference of the US Army Association, an obligatory part of which is an exhibition of advanced developments. On the eve of the conference, Rheinmetall announced a display of several new products. The main model in its exposition was to be a full-size layout of the Lynx OMFV.

With the help of such a product, they showed the appearance of a promising machine and the composition of the main units. In addition, augmented reality technology allowed visitors to the exhibition to see the internal structure and various design features. For those who did not get to the exhibition, they published a promotional video with all the necessary information.

At the moment, the OMFV program is at the stage of competitive development of preliminary projects. In addition to Rheinmetall, BAE Systems, General Dynamics Land Systems, Oshkosh Defense and Point Blank Enterprises participate in it. All contestants have already published various materials on their projects, but only Rheinmetall has shown a full-size sample so far. 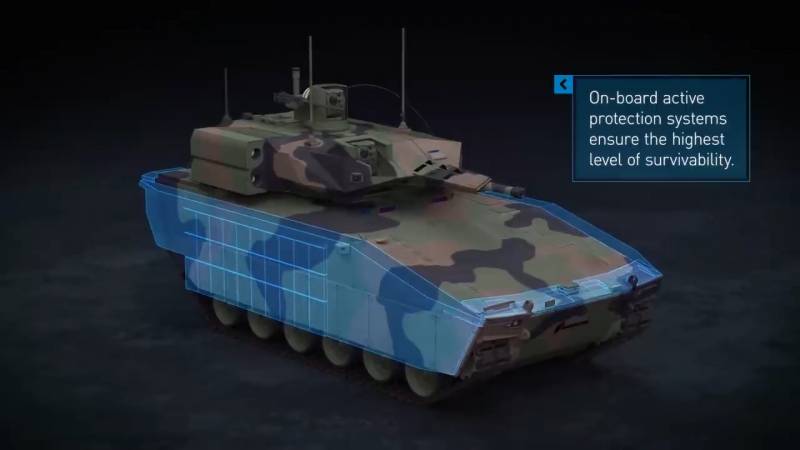 Modular hull armor
According to the program schedule, preliminary projects will be accepted until November 1st. In April next year, the Pentagon will name the three most successful developments for further development. The next two years will be spent on the development of technical projects and the construction of prototypes. Comparative tests of three infantry fighting vehicles will begin in July 2025.

About a year and a half is allotted for testing - they will be completed by the end of 2026. In January 2027, the winner of the program will be determined. In the coming months, it will begin mass production "at a slow pace." Due to this, by the fall of 2028, the first battalion of the ground forces will be transferred to the new equipment. A full-scale series will begin only in 2029-30.

Which of the five projects will move to the next stage of the competition is unknown. So far, it will not be possible to guess the winner of the entire program. At the same time, all participants are optimistic and look forward to further success. Thus, Rheinmetall received a new reason for positive forecasts. She was the first to complete the preliminary study of the project and showed a full-fledged model of her BMP. Whether it will be possible to maintain such “leadership” in the future is unknown. 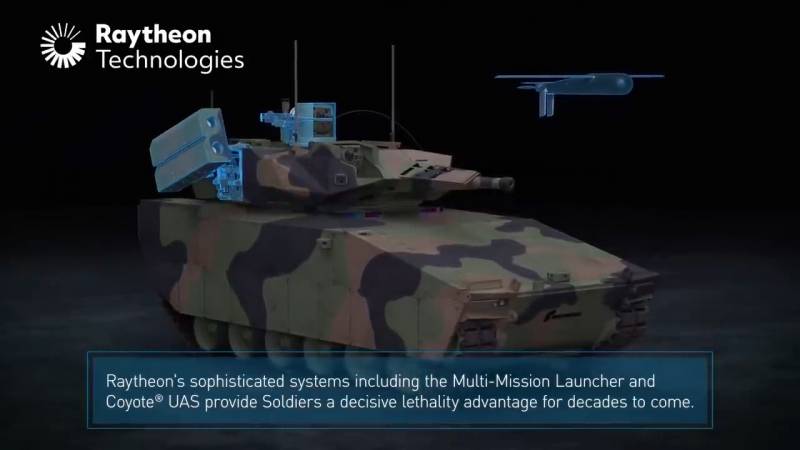 Armament complex; the launcher and loitering ammunition are highlighted

The Lynx OMFV project is being created on the basis of the existing Rheinmetall KF41 infantry fighting vehicle. The use of a number of ready-made units and systems is envisaged. At the same time, the full composition of equipment, equipment and weapons is determined taking into account the terms of reference of the Pentagon. As a result, the two versions of the BMP Lynx are similar in appearance and architecture to each other, but have significant differences and fundamentally different capabilities.

The US Army offers a tracked combat vehicle with a combat weight of up to 45-50 tons, depending on the selected configuration. The front-engine layout of the hull is preserved. Behind the engine compartment is a two-seat control compartment, and the remaining volumes are given over to the troop compartment for six seats. On the roof there is a combat module-tower.

Like the KF41, the U.S. IFV has bulletproof/projectile-proof hull armor. Installation of various mounted modules is envisaged, raising the protection to the required level. At the request of the customer, an active protection complex can be mounted.

Lynx OMFV gets a 700-750 hp diesel engine. and Alisson eGen Force electric transmission. If there is an order, a hybrid power plant can be made on the basis of the latter. In any case, the armored vehicle will show high mobility and maneuverability. 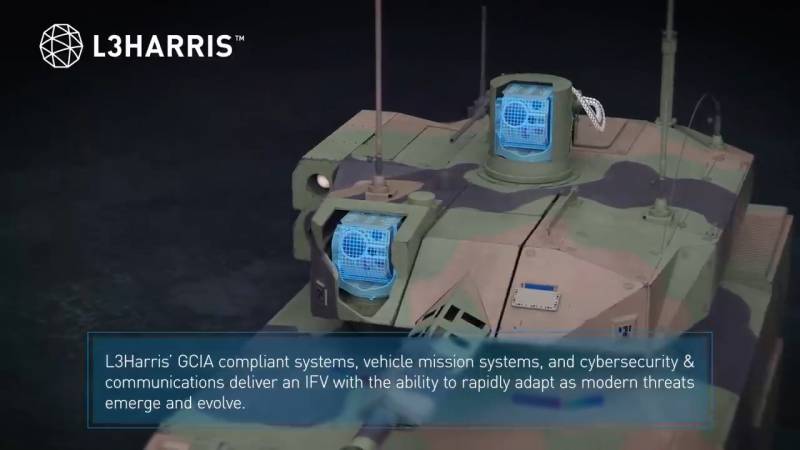 Sights of a new type
A new remote weapon station has been developed for the BMP in the form of a full-size turret. His main weapons is the 50mm XM913 automatic cannon. It also provides for a launcher for two loitering ammunition of the Raytheon Coyote type. It is proposed to equip the DUBM with two multi-channel sights from L3Harris with thermal imagers of the 3rd generation. The panoramic commander's sight carries a heavy machine gun and performs the functions of another DBM.

With the participation of several companies, jobs for two crew members were developed. They house large-format screens and the necessary controls; there is equipment for receiving and processing data, a fire control system, etc. To increase the situational awareness of the crew, cameras and sensors are located around the perimeter of the vehicle. The equipment will take on some of the tasks and reduce the load on the crew. It is proposed to fully include the BMP in the network-centric control loops of the army.

The machine will have a remote control mode. If necessary, the crew will be able to take seats at the control station and fully control the armored vehicle. The station and the infantry fighting vehicle will exchange data over a secure radio channel; communication range is not specified. Perhaps the Lynx OMFV will receive some autonomy and be able to independently perform simple tasks, while a person will be responsible for the use of weapons.

To date, Rheinmetall and subcontractors have developed only a preliminary version of the Lynx OMFV project. However, they are already claiming that such a combat vehicle will show high performance and be able to solve all the intended tasks. 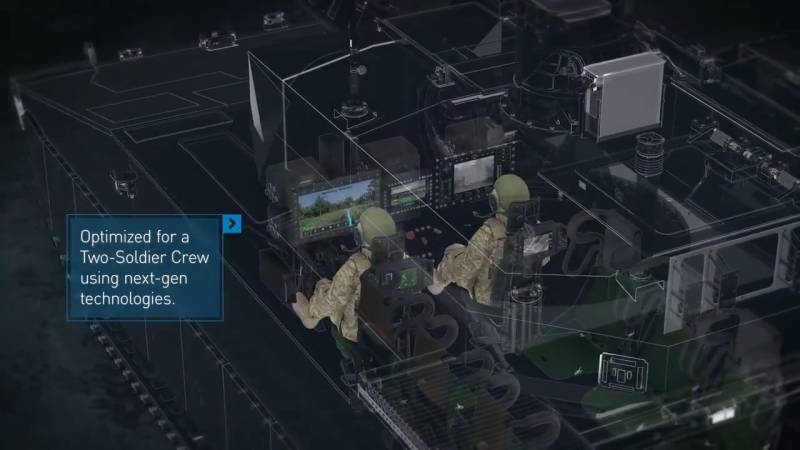 Department of management with the necessary devices
Depending on the current needs of the unit, the armored vehicle will be able to transport and land infantry, as well as support it with fire, participate in patrols, perform reconnaissance, etc. In all cases, the Lynx OMFV should show certain advantages over the current BMP M2.

Thus, an increased level of protection against ballistic and other threats, as well as explosive devices, is declared. Despite the large mass, mobility will be at the required level. A significant increase in fire performance is expected - it will be provided by new sights, FCS, a larger caliber gun, etc. In various combat and non-combat situations, the presence of autonomous or remote control will be an advantage.

However, development companies should not yet indulge in excessive optimism. The Lynx OMFV project is characterized by great courage, and its participants will have to solve a number of difficult technical problems. In fact, to date, only an armored tracked platform and some other components have been developed, refined and ready for production. 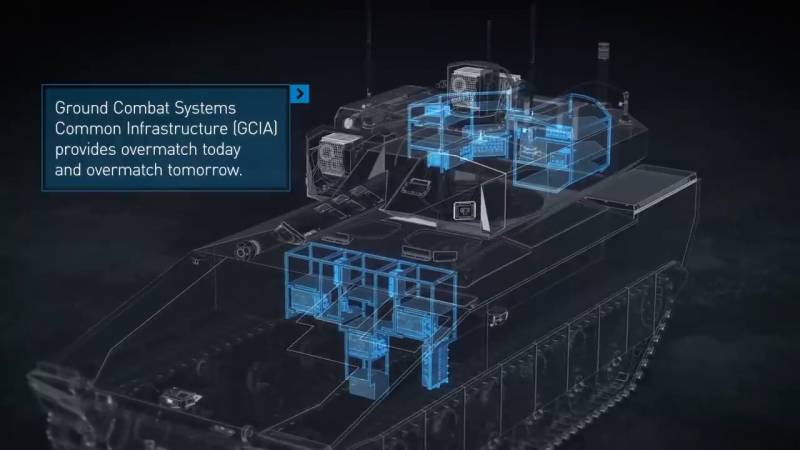 Control equipment and other means
In turn, the key systems that determine the main capabilities and advantages of a promising infantry fighting vehicle are still under development. Their creators may face various difficulties that will prevent them from completing the development with the desired results and / or within the specified time frame. As a result, the actual characteristics of the finished armored vehicle may be more modest than those declared, and besides, it will not receive all the promised features.

The Pentagon OMFV program currently involves five projects from different developers. In the near future, the army will study them and select the three most successful ones. Whether the BMP Lynx OMFV project will be among them is unknown. The real potential of this development is not yet fully clear.

In addition, the other participants in the competition have not yet submitted all the required materials, and it will not be possible to compare the projects. It cannot be ruled out that the Rheinmetall armored vehicle really has advantages and gets every chance of winning. However, to date, the company has outstripped competitors only in the construction and demonstration of the layout. Whether it will be possible to maintain leadership in the next stages of the program, time will tell.