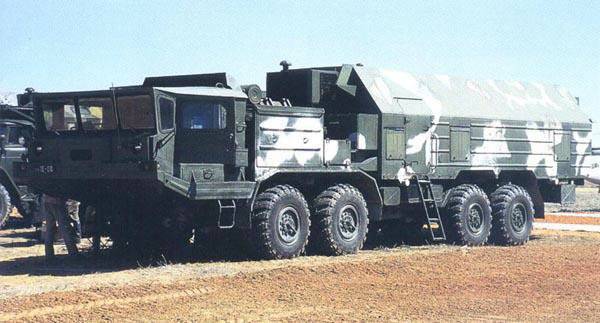 In the KSHM trailer were the AWS of the brigade chief of staff and the head of the operational department (brigade communications chief) - the ATSD operator and six non-automated jobs for brigade staff officers.
To ensure the combat operation of the Polyana-D4 ACS, the common air defense system of the SV provided for the exchange of digital operational-tactical and radar information, as well as voice communication with higher-level, subordinate and interacting command-points and control points through the attached communication center

Information exchange between PBU and KSHM was carried out via cable communication lines.
For communication between the crews of mobile units of the automated control system Polyana D4, on the march, VHF radios installed in the cabs of drivers were used.

The deployment time (collapse) of the Polana-D4 ACS by the calculation forces did not exceed 20 min.
ACS "Polyana-D4" provided management:
• up to four anti-aircraft missile battalions armed with C-300B or Buk (“Buk-М1”) air defense missile systems and their modifications;
• subordinate radar posts PORI-PNNUMX or PORI-PNNUMX;
• The control point of the means of direct protection of the PU-12M brigade or the unified battery command center "Ranzhir".

It was also envisaged to interface the Poliana-D4 ACS with the tactical formations of the Air Defense Forces.

Sources of information about the air situation for the AMS "Polyana-D4" were:
• The control points of the PORI-PNNUMX or PORI-PNNUMX radar posts;
• A-50 airborne radar and guidance complex;
• KP anti-aircraft missile battalions C-300В or "Buk"
• KP air defense of the front (army);
• KP tactical formation of the Air Defense Forces of the Country;
• KP fighter aviation front air force (army).

The Polyana D4 automated control system implemented the principle of mixed combat control of the S-ZOOV or Buk anti-aircraft missile brigade, which combined the centralized targeting of the brigade's command post with the autonomous actions of anti-aircraft missile battalions to select targets in their assigned areas of responsibility.

The air situation was displayed on the displays of the automated workplace PBU in the form of symbols of its own, alien and unidentified targets. Next to the target symbol, its number, height and quantitative composition (for group purposes) were displayed. Provided mapping to 5 traces targets, extrapolated for a time to 7 minutes

The control of subordinate RLP carried out with the PBU ACS "Polyana-D4" allowed to change the measurement rate of the coordinates of the targets, to clarify their affiliation, etc.

Selective notification of divisions and means of direct brigade cover was formed automatically in accordance with the importance (danger) of the targets and the position of the subordinate means of destruction.

Operational and tactical information from the air defense command post of the front (army) was sent to the Polyana-D4 ACS in the form of orders and instructions, information about the enemy, teams for the distribution of efforts, flight corridors and applications for flights of their aircraft, fighter duty zones (army) reference point, information about the ground situation.

The exchange of operational and tactical information between the Polyan-D4 ACS and the air defense command post of the front (army) was carried out via secret telecode communication channels.

To control the combat operations of the missile battalions and units of direct protection, the Polyana-D4 ACS provided:
• the formation and transfer of command-line divisions to a command and control team on the distribution of efforts in the form of sectors, areas of responsibility, missile-prone areas, receiving and displaying reports on their performance;
• the formation and transfer to the control point of divisions of the coordinates of the reference point;
• the formation and transfer to the control gear of divisions and the point of control of the means of direct cover (PU SNP) of commands of a general type, receiving and displaying reports on their execution;
• formation and transmission of command and control personnel of a divisional control unit and a PU of a DPR to objectives, receiving and displaying reports on the progress and results of their implementation;
• continuous processing, issuance for display means and input into the algorithms for target distribution and coordination of combat actions of the divisions of the air defense command post of the front (army) and combat planner of the air force of the front air force (army) about the air situation with signs of actions on the IA and air defense missile systems, as well as reports from battalions of combat work on targets assigned from the command brigade and selected independently;
• input to the ACS "Polyana-D4" data on the status, status, combat readiness and nature of the actions of subordinate units.

The Polyana-D4 ACS also provided for the transfer to the air defense command post of reports on the status, combat readiness and results of combat operations of all the brigade’s combat weapons, on the execution of commands for the targets issued by this command post, on the distribution of the brigade’s efforts.

In the standby mode of operation of the Polyana-D4 ACS, the operation of a limited number of ACS hardware was provided, which ensured the reception of information about the air situation, warning signals and commands to bring the brigade's units to various degrees of combat readiness, control the brigade's duty units.

In the period from May 1985 to June 1986, the prototype of the automated control system "Polyana-D4" passed the entire cycle of state tests,

At the first stage of testing at the simulation-modeling complex, the Research Institute of Automation Tools made an assessment of the correctness of the software, performance, temporal and accuracy characteristics of the AMS Polyana D4 automated control system, as well as testing the possibilities of providing information interface of the system with objects that have not yet been completed.

The second stage of state testing was carried out at the Embeni test site and included an assessment of the operational and technical characteristics of the system in real conditions, verification of its information technology interface with the existing controlled objects and communication facilities, as well as confirmation of the performance characteristics obtained using simulation modeling.

In 1986, the Polya-D4 automated control system was adopted by the air defense forces of the Armed Forces.

The creation of the automated control system Polyana-D4 was a new qualitative step in the direction of automating the control of anti-aircraft missile formations of the operational level of military air defense.

In terms of its performance characteristics, the Polyana-D4 exceeded the American Missile Minder automated control system, which was used at that time to control the air defense missile system of the NATO ground forces.