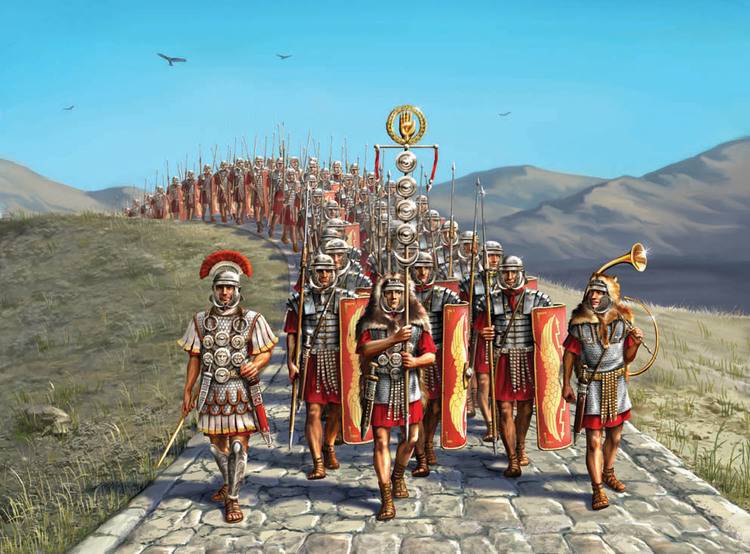 Gnaeus Pompey the Elder (Great) was married five times and had three children - two sons and a daughter. All of them were born in a third marriage - from Muzia Tertia, with whom Pompey divorced due to suspicions of adultery. His only daughter in his first marriage was married to the son of the dictator Sulla. She enjoyed great respect in society, maintaining her position under Caesar, and under Octavian, and under Tiberius.

The eldest son of Pompey and his full namesake, Gnaeus Pompey the Younger, was married to the eldest daughter of Appius Claudius Pulchra and was the brother-in-law of Mark Junius Brutus. 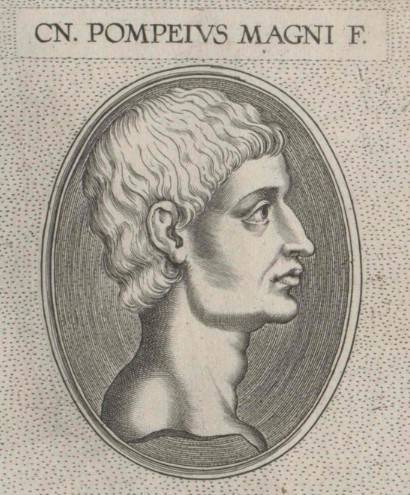 Gnaeus Pompey the Younger in a portrait by an unknown author
В historical sources of information about the eldest son of Pompey Magna appear only in 49 BC. e. (at this time he must have been about 30 years old). That year, Caesar crossed the Rubicon and occupied Italy, and Pompey the Great moved to Macedonia, where he began to prepare for war with his former father-in-law (his fourth marriage was to Caesar's daughter, but she had died by that time). Pompey sent his eldest son to Alexandria, where the young king Ptolemy XIII ruled, whose wife was his older sister, the famous Cleopatra. Such was the will of their father, and he appointed Rome, in the person of Pompey the Great, as the guarantor of its execution. According to Plutarch, Gnaeus Pompey the Younger made a great impression on Cleopatra with his courageous beauty, they even talked about their love affair. It is difficult to say how much this affair helped the son of Pompey then, but he received ships from the Egyptians - according to various sources, from 50 to 60 "quadriremes and quinqueres, perfectly equipped and ready to sail." Pompey the Younger and led this squadron, which became part of fleet Mark Calpurnius Bibulus, who covered the coasts of Illyria and Epirus. Pompey's squadron burned the Caesarian warships at Orik and 30 cargo ships at Lissa.

But Caesar, who returned from Spain as a winner, nevertheless managed in early January 48 BC. e. send part of his army to Epirus, and in April the remaining troops landed here, commanded by Mark Antony.

After the defeat of Pompey the Elder at the Battle of Pharsalus (August 9, 48 BC), the Egyptian ships left for Alexandria, where Gnaeus Pompey the Elder, who arrived there, was soon killed. And Pompey the Younger moved to the island of Kerkyra. Many prominent opponents of Caesar gathered here, including Quintus Caecilius Metellus Scipio, Marcus Porcius Cato, Titus Labienus, Lucius Aphranius, Marcus Terentius Varro and Marcus Tullius Cicero. They did not yet know about the murder of Pompey the Elder. They had at their disposal a large fleet (about 300 ships) and the province of Africa, which, in alliance with the Numidian king Yuba, defended from the legates of Caesar, Publius Attius Var. It was decided to transfer the command to Cicero, but he refused and even said that he was ready to obey Caesar. Gnaeus Pompey the Younger almost killed him, but was stopped by Cato.

After that, he went to Africa where he met his stepmother and younger brother, from whom he learned about the death of his father. On the advice of Cato, who soon arrived, Gnaeus at the beginning of 47 BC. e. went to Spain. He then had at his disposal 30 ships and a detachment of two thousand, which consisted mainly of freedmen. However, Appian claims that Gnaeus the Younger went to Spain already from Kerkyra and with him already then there was an experienced military leader and Caesar's closest collaborator during the Gallic wars, Titus Labienus (who, according to other authors, arrived in Spain after the defeat of the Republicans at Taps - April 6, 46 BC).

One way or another, Pompey occupied the Balearic Islands, but then fell ill and was inactive until the summer of 46 BC. e. Finally, his troops landed at Baetica. By that time, Caesar had already conquered Africa, and thus Pompey the Younger found himself alone against the full power of the Roman Republic. But in Spain he was doing well. His army included former soldiers of the legates of Pompey the Elder, Roman colonists, men of local tribes, and even slaves. Korduba, Munda, Gispalis and some other cities of Further Spain surrendered without a fight. New Carthage, the provincial capital, was occupied. Two legions of Gaius Trebonius, the governor of Caesar, went over to the side of the son of Pompey. Finally, allies who had been defeated in Africa arrived to him, including his younger brother Sextus. Gnaeus Pompey the Younger declared himself emperor and minted his own coin.

Denarius of Gnaeus Pompey the Younger, Spain, 46-45 BC.
According to some reports, he managed to raise an army of 13 legions and 6 lightly armed soldiers. The Roman legates Quintus Fabius Maximus and Quintus Pedias suffered defeat, and in November 46 BC. e. Caesar himself came to Spain. He had only 8 legions, but he had an advantage in the number of horsemen and lightly armed warriors. February 45 B.C. e. Caesar, after a month-long siege, took the important fortress of Ateguia. And on March 17 of the same year, the opponents entered into a decisive battle near the city of Munda. Data on the forces of the parties are contradictory. Some say that the numerical superiority was on the side of the Pompeians, while others, on the contrary, argue that the advantage was to Caesar. The bitterness on both sides was very great, and, according to Dio Cassius, the soldiers of Pompey's army "did not count on mercy and were not going to give it themselves."

Pompey's army, which occupied an advantageous position on a hill, repelled the enemy onslaught for a long time, sometimes dangerously counterattacking, so that Caesar himself even had to fight in the forefront. He later said that it was only at the Battle of Munda that he fought for his life and not for victory. 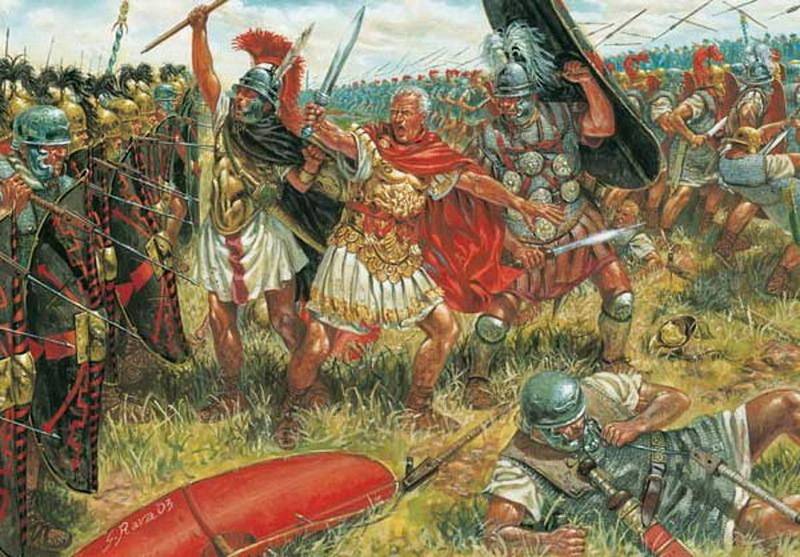 Giuseppe Rava. Caesar dragging his soldiers forward at the Battle of Munda
The decisive role was played by the Moorish cavalry of Caesar, who broke through one of the flanks of the Pompeians. Titus Labien was forced to withdraw 5 cohorts to defend the camp. This maneuver was perceived by everyone as a retreat, and Pompey's army faltered. The battle was lost, following this defeat, Korduba, Munda and Hispalis surrendered to Caesar.

Gnaeus Pompey the Younger fled the battlefield with only 50 horsemen and reached Cartea, where his fleet was located. When landing on the ship, he caught his foot on the rope and someone wounded him, in a hurry to free his leg. This, of course, is evidence of the terrible haste in which the boarding of the ship was then carried out.

The misadventures of Gnaeus Pompey the Younger did not end there. After 4 days, his squadron was forced to land on the shore to replenish fresh water, and was discovered by the fleet of Aulus Didius. Gnaeus the Younger tried to escape by land, was overtaken and killed. Appian claims that, despite the wound, the eldest son of Pompey the Great "given his life dearly."

The head of Gnaeus Pompey was brought to Rome, shown to the people and soldiers, and then buried.

Now it was the turn of the younger son of Pompey the Great, who had previously been in the shadow of his older brother. 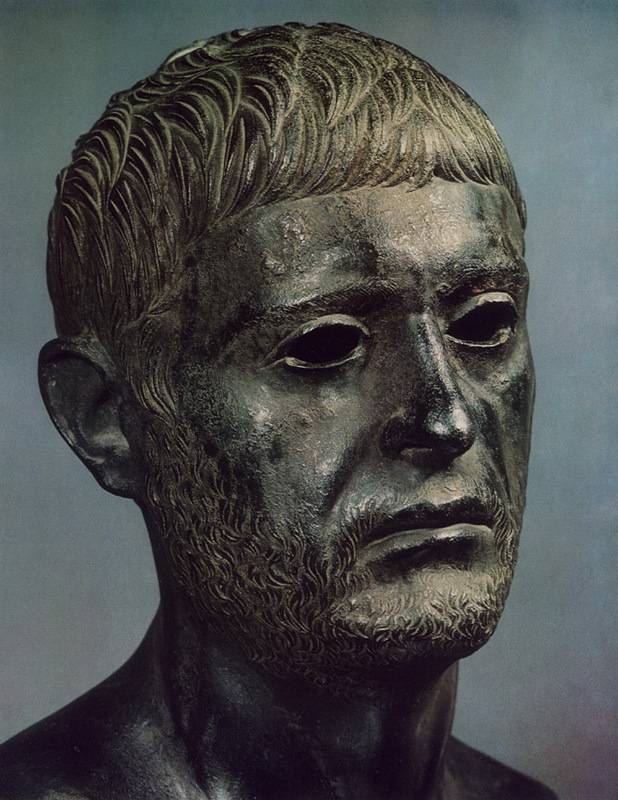 Possible portrait of Sextus Pompey, bust, bronze, third quarter of the XNUMXst c. BC e.
During the war between his father and Caesar, Sextus is with his stepmother in Mytilene on the island of Lesbos. After the defeat at Pharsalus, Pompey, taking his family, went to Egypt, where he was killed - allegedly in front of his wife and son. 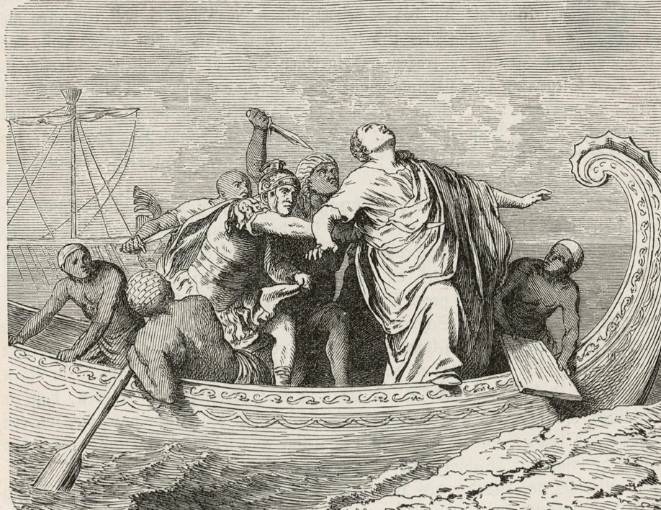 The murder of Pompey illustrated by G. Leutemann
Sextus went to Tyre, and from there to Africa. After the defeat of the Republicans at the Battle of Tapsa, he moved to his brother in Spain, where he became the head of the garrison of Corduba. Upon learning of his brother's defeat at the battle of Munda, he distributed all the money he had to the Roman horsemen who had fled to Corduba, and he himself went to the Lacetan tribe, friendly to his family. After Caesar left for Rome, he began his war and achieved great success, subjugating all of Baetica and part of Near Spain. Soon in his army there were already, according to various sources, from 6 to 7 legions. The soldiers proclaimed him emperor.

After the assassination of Caesar, Sextus Pompey was amnestied, received an offer to return to Rome to receive his father's inheritance, and even, at the suggestion of Mark Antony, who was then seeking an alliance with the Pompeians of the Senate, was appointed commander of the fleet of the Roman Republic. Having moved to Massalia, Sextus took command of the fleet, but he was prudently in no hurry to return to Rome, since the Mutinskaya war had already begun, which the Senate waged against both Mark Antony and Octavian, who, in turn, could not stand each other. Sextus Pompey was right in assessing the situation, because already in 43 BC. e. Octavian, Mark Antony and Lepidus agreed on an alliance for 5 years, forming the Second Triumvirate. All participants in the conspiracy, during which Caesar was killed, were outlawed. The younger son of Pompey was also included in the proscription lists, although he had not even the slightest relation to the murder of Caesar. Sextus Pompey led the fleet to the western coast of Sicily and began to intercept grain transport ships, as well as attack coastal Italian cities. In addition, he announced that for the salvation of persons included in the proscription lists, he would pay twice as much as the triumvirs for their heads, and this earned him the respect and sympathy of very many people.

In December 43 BC. Sextus Pompey landed in Sicily. At first, he agreed with the Roman governor on the division of the island, but soon executed him. Everyone who was oppressed by the triumvirs immediately fled to Sicily, including the aristocrats included in the proscription lists. But especially many of these fugitives were slaves, whom Pompey willingly accepted. He appointed people to high positions solely on business qualities, and the freedman Menodorus commanded his fleet. The commanders of individual squadrons were also freedmen - Menekrates, Democharus and Apollofan. Pompey's detractors claimed that in the past they were pirates who were once defeated by the father of Sextus.

In the next article, we will continue the story of Sextus Pompey, the challenge that he threw to the triumvirs, his victories, missed opportunities and inglorious death.