October 25 2012
15
M-55 "Geophysics" (according to the NATO codification of Mystic-B) is a Soviet and later Russian high-altitude subsonic reconnaissance aircraft. It was designed and built according to the scheme of an all-metal semi-monocoque high-wing, normal aerodynamic scheme with a free-carrying wing. Over time, the aircraft was used exclusively for civilian purposes. The M-55 high-altitude aircraft is capable of conducting studies in the stratosphere at altitudes up to 20 km., Monitoring the air environment, land, water basins, as well as acting as a repeater to provide radio and telephone communications. Also on the basis of the M-55 was designed anti-hail protection system.

The M-55 “Geophysics” high-altitude aircraft is able to be on a research flight for over 6 hours and carry up to 1,5-2 tons of various kinds of scientific equipment, which provides both direct measurements of the composition and environmental parameters, as well as remote microphysical and chemical studies at a distance of several kilometers from the aircraft. At the same time, the M-55 “Geophysics” has unique altitude characteristics, which, together with a decent payload, made the aircraft indispensable when conducting various studies of the lower strata of the Earth’s stratosphere.

At one time, the M-55 high-altitude aircraft was developed in the interests of the military and was one of the most mysterious and original Soviet aircraft (even its NATO code name is Mystic, which means mystical, mysterious), but for more than ten years it carries peaceful serving, serving science. The fate of this aircraft is just as unusual as its appearance. Created for war, it eventually became a means to strengthen peace, as well as to develop international cooperation. Currently, this aircraft is used by scientists from different countries of the world to perform high-altitude studies of the atmosphere, as well as solving environmental problems of the Earth. 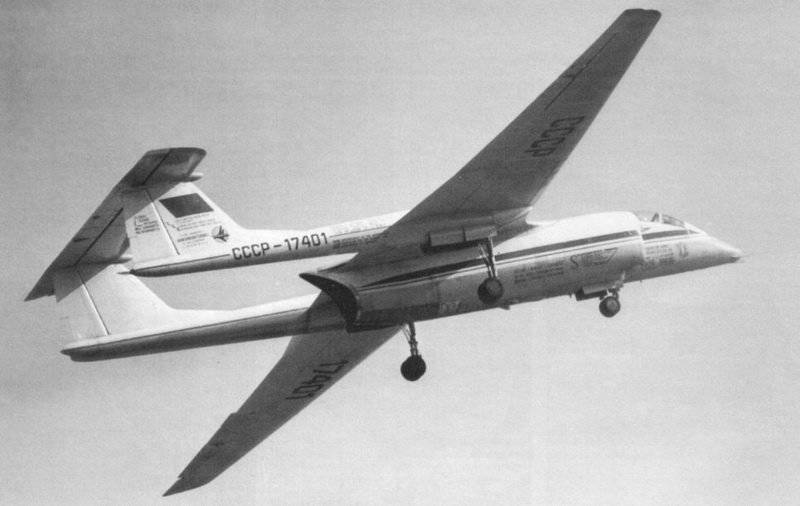 The aircraft was used in various scientific expeditions, including in Latin America. In Brazil, within the framework of the international scientific program TROCCINOX, the aircraft took part in a series of experiments to study the high layers of the atmosphere. Also in 1999, the aircraft was used to study the atmosphere in high southern latitudes, flying from Argentina. There are also flights to the tropics (a series of experiments based on the Seychelles in 55) and expeditions to the Arctic (flights from Sweden and Finland in 1999-1996 and 1997, respectively). The aircraft, in addition to participating in modern scientific research, became involved in the establishment of many world aviation records.

History create and use

The history of the M-55 high-altitude aircraft originates back in the distant 1967 year, when the team of the Experimental Machine-Building Plant just formed in Zhukovsky near Moscow, which was headed by the patriarch of the Soviet aircraft industry Vladimir Myasishchev, was asked to solve the problem of developing the means to conduct effective combat all sorts of high-rise automatic drifting balloons. Such aerostats, beginning with the 1950-ies of the XX century, brought the USSR a lot of trouble: being in free drift, they invaded Soviet territory and for quite a long time successfully conducted their espionage activities.

The fight against this kind of aerostats turned out to be quite difficult: their low flight speed and high drift height made it difficult to intercept them with the help of supersonic interceptor fighters, which were then in service with the USSR Air Defense Forces. They presented a certain problem and rather large sizes of spy balloons, for their guaranteed defeat it was necessary to damage a significant part of the balloon surface, which made sufficiently high demands on missile warheads and projectiles. In addition, the process of detecting such targets, which had a fairly low reflective surface, was also difficult. 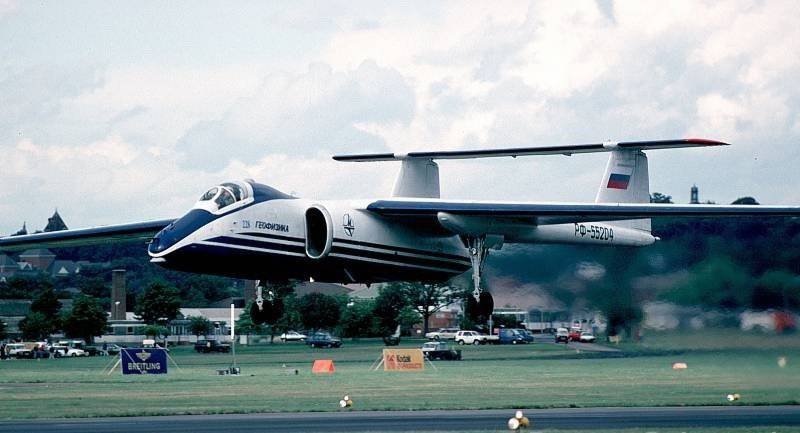 To solve this rather difficult task, Vladimir Myasishchev proposed to develop a project of a special high-altitude aircraft, which would be able to fly at high altitude - up to 23-25 km and could carry special electronic-optical means on board of its aircraft to detect enemy balloons, as well as sufficient power. mobile artillery installation for their destruction. Taking into account the specifics of further use, the plane was decided to equip the high-altitude modification of the most powerful at the time in the USSR turbojet engine RD36-51, created in the Rybinsk engine-building design bureau, as well as a wing with very large elongation (more than 10). The engine created in the RCML (today NPO Saturn) was designed under the leadership of P. A. Kolesov and was originally intended for the Soviet supersonic passenger plane Tu-144D. The high-altitude modification of this engine, which was capable of producing the required thrust at a height of more than 20 000 meters, was designated the RD 36-51 B.

The aerodynamic layout of the created high-altitude fighter of balloons, which received the designation M-17, was made according to a rather original two-block scheme. In the central fuselage gondola of the aircraft there was a pilot's cabin, a gun mount (behind the cockpit from above), aim-navigation equipment, as well as a power plant with side air intakes. The central fuselage gondola ended with an engine nozzle located at the level of the trailing edge of the high wing of the aircraft. To the wing consoles approximately on the 1 / 5 of their half-span, tail beams were attached, which were interconnected by a U-shaped tail tail. The front landing gear of the aircraft was retracted to a special compartment in the central part of the fuselage, and the main landing gear in the compartments of the tail beams.

The production of the first machine started only in 1974 year. By the end of 1978, the first flight copy of the aircraft was ready. The car rolled out on the factory airfield "Vorotnovka". For camouflage purposes, the aircraft was painted in the colors of Aeroflot, and also received the civil registration number USSR-17100. Unfortunately, the very first flight of the car ended tragically. 24 December 1978 of the year in conditions of poor visibility when entering the second round of the plane caught the wingtip for a hill invisible in a snowstorm. As a result of the crash, test pilot Kir Chernobrovkin died. 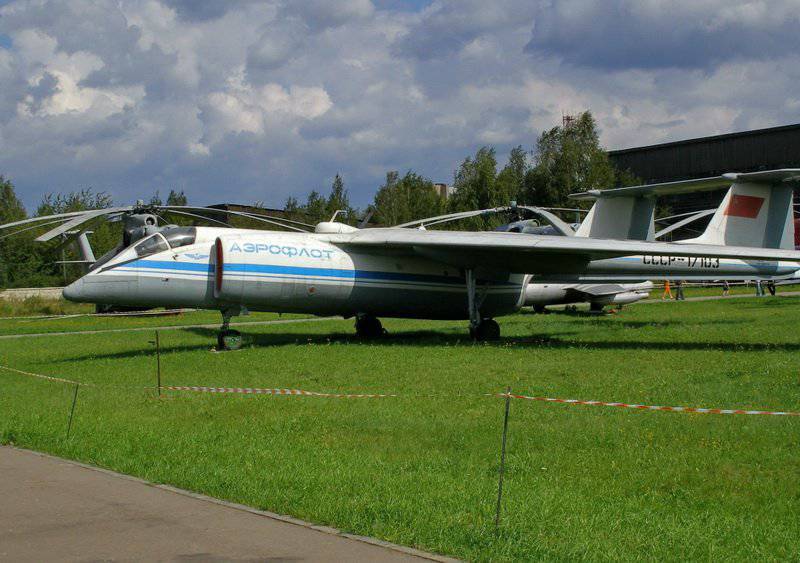 As a result, the tests were first postponed for 3,5, and then simply dragged on. At the same time, by the middle of 1980, the need for such machines was greatly diminished. The problem of reconnaissance balloons has lost its relevance, since they almost never flew into the territory of the USSR. For this reason, it was decided to create a high-altitude reconnaissance-strike complex based on the M-17 base, which would consist of a ground control and targeting station that would provide target designation of attack aircraft and ground-to-ground missiles and the reconnaissance aircraft itself. As a result, the modified high-altitude aircraft M-17РМ made its first flight on August 16 1988. This machine soon received the name M-55 "Geophysics".

After the collapse of the USSR, new tasks were set before the machine. At this point, it was decided that the aircraft could be demonstrated publicly. As a result, in 1992, he took part in Mosaeroshow-92, and the following year at the MAKS-93 air show. In November, 1993, the aircraft first flew abroad, to Italy, where he took part in a European scientific conference on the study of the Arctic. It was there that a new page was opened in the biography of these subsonic high-altitude machines, thanks to which he became known throughout the world.

In the fall of 1993, a number of flights were performed on the plane with the establishment of international aviation records. From September 21 to October 4 1993, test pilots V. P. Bukhtoyarov, V. V. Vasenkov, O. A. Shchepetkov set 16 world records for climb and altitude. In particular, they obtained flight altitude values ​​in 21 360 meters with cargo in 1 and 2 tons on board, as well as heights of horizontal flight 21 340 m and time of ascent in 20 km (with 2 tons of cargo on board) - 22 min. 14 seconds 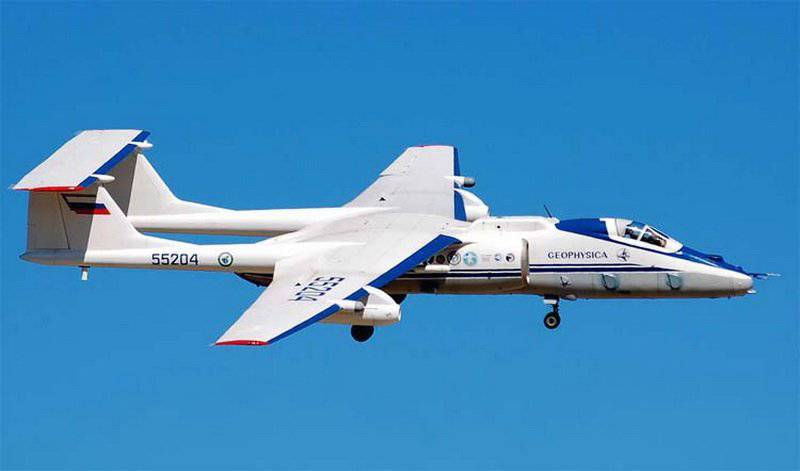 After the flight to Italy, a relevant agreement on scientific and technical cooperation with the Italians was concluded, after which the aircraft was significantly improved in accordance with the requirements of scientists. At the same time, the creation, testing and installation of equipment that could work in the unpressurized compartments of the aircraft at low temperatures was quite a challenge. Scientific equipment installed on the aircraft included powerful and low-power lidars for detecting polar stratospheric clouds and aerosols, spectrometers for remote analysis of the chemical composition of the atmosphere, and a set of equipment designed to measure the basic meteorological parameters of the atmosphere at various altitudes in the lower the stratosphere and the troposphere.

In October-November 1996, Italy carried out test tests of all scientific equipment, which was installed on board the M-55 aircraft. This equipment was created and manufactured in Russia, Italy, Switzerland and Germany, as well as other countries participating in the AirbornePolarExperiment (APE) program. The first scientific expedition of the converted aircraft took place from December 1996 to January 1997. At this time, the high-altitude aircraft M-55 "Geophysics" took part in the program for the study of the atmosphere of the Arctic - APE-POLECAT. At this time, the aircraft was based at the Finnish Santa Claus airfield near the city of Rovaniemi. The aircraft was used to conduct a series of scientific experiments, during which scientists studied the ozone hole over the Arctic, gravitational waves and polar stratospheric clouds. As part of these scientific works, the aircraft spent 45 hours in the air, receiving unique data on the composition and structure of the lower stratosphere over the Arctic part of Russia, as well as over various regions of Scandinavia, using the equipment installed onboard. 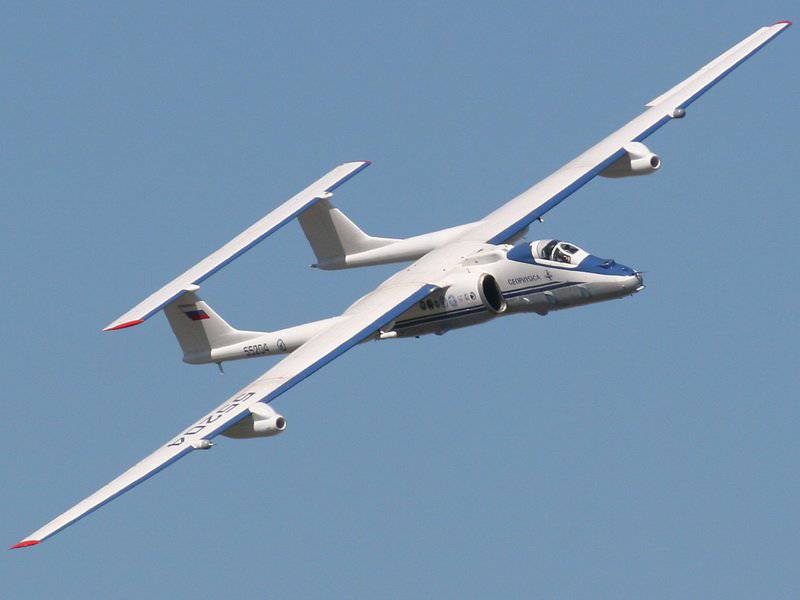 The academic community was quite attracted to their research of the Russian aircraft "Geophysics". No other aircraft on Earth was able to carry out long flights in the stratosphere at an altitude greater than 20 km., While taking on board up to 2 tons of various scientific equipment. It was the unique capabilities of the aircraft opened for him a long scientific future.