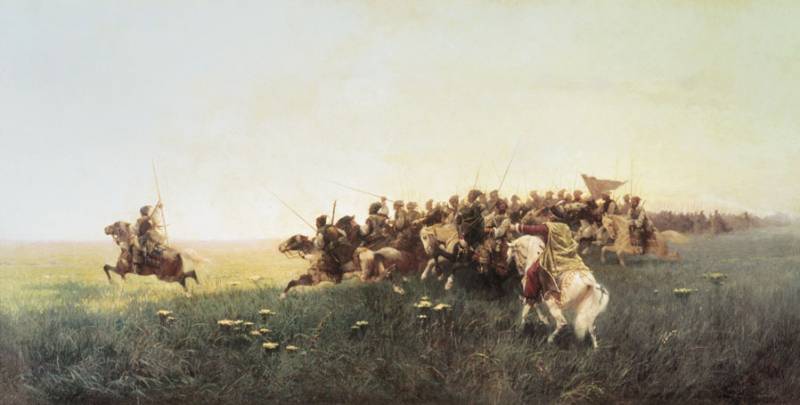 The Russians responded to the colonial, anti-Russian policy of the Commonwealth with large-scale uprisings. The core of resistance was the Cossacks, as the most passionate (active) part of the Russian superethnos.

The use of the Zaporizhian Cossacks as a military force (Why Russian Ukraine rebelled against gentry democracy) was a very reasonable step on the part of the rulers of the Commonwealth. The Cossacks fought on the side of Poland during the Time of Troubles in the Russian kingdom, in the Smolensk war. The Cossacks saved the Commonwealth more than once in the wars with the Crimean Khanate and Turkey. They continued a stubborn struggle with the Crimean Tatars, defended the southern Ukraine, the outskirts of the Polish kingdom. They responded to blows and raids with their raids and campaigns.

The surroundings of Ochakov, Bendery, Akkerman, Azov and other Turkish fortresses blazed with fire, the Cossacks' naval landings smashed Kafa, Kerch, Evpatoria, Trebizond and disturbed even the suburbs of Istanbul-Constantinople. The Cossacks did not give rest to the slave traders in the Crimea and Turkey, they crossed the Black Sea on their boats, seagulls, as the warriors of Oleg the Prophet and Svyatoslav Igorevich once did. Thousands of Christian slaves were freed.

However, the panamas were not smart enough to use the Cossacks, and gradually, step by step, Polonized them, and then the entire Russian Ukraine. As previously it was done with the Western Russian elite - the princely and boyar families of Lithuanian Rus. Polonization and catholicization, together with the parasitic and most cruel methods of colonialism, when the Russians in the Ukraine became a kind of Indians for the Polish gentry (“chosen”, “real Christians”, in contrast to Russian heretics), began to be carried out in an accelerated mode.

After the adoption of the Union of Brest in 1596, which led to the subordination of a number of bishops of the Kyiv Metropolis to the Pope and the creation of the Russian Uniate Church on the territory of the Commonwealth. Catholics, the Polish authorities, and then the Uniates began to oppress the Orthodox (that is, Russians). From the point of view of Catholics and Uniates, upon acceptance of the Union by any Uniate priest or hierarch, it automatically transfers to the new church and its flock. And in this case, the land holdings of the corresponding church or monastery should also become the property of the Uniates. The law was on the side of the Uniates, whose property rights were reinforced by royal decrees. It is clear that this did not suit the main part of the Orthodox.

The broad masses of the Russian nobility (gentry), lower clergy, townspeople, Cossacks and peasants did not renounce the faith. At the same time, the lower ranks of the clergy and the Cossacks took the toughest positions, preventing the higher hierarchs from pursuing a more “flexible” policy, from compromising with the Uniates. A long and bloody confrontation began. The Orthodox defended Kyiv. King Vladislav IV (1632–1648), trying to enlist the loyalty of Russians in Ukraine in the Smolensk War, in 1633 recognized the legitimacy of the Orthodox Church. Peter Mogila, who became the Metropolitan of Kyiv, was given all Kyiv churches and monasteries. King Vladislav allowed the Orthodox to freely practice their faith and build churches. True, royal power was worth little in the lands of the magnates and pans, who established their own rules. 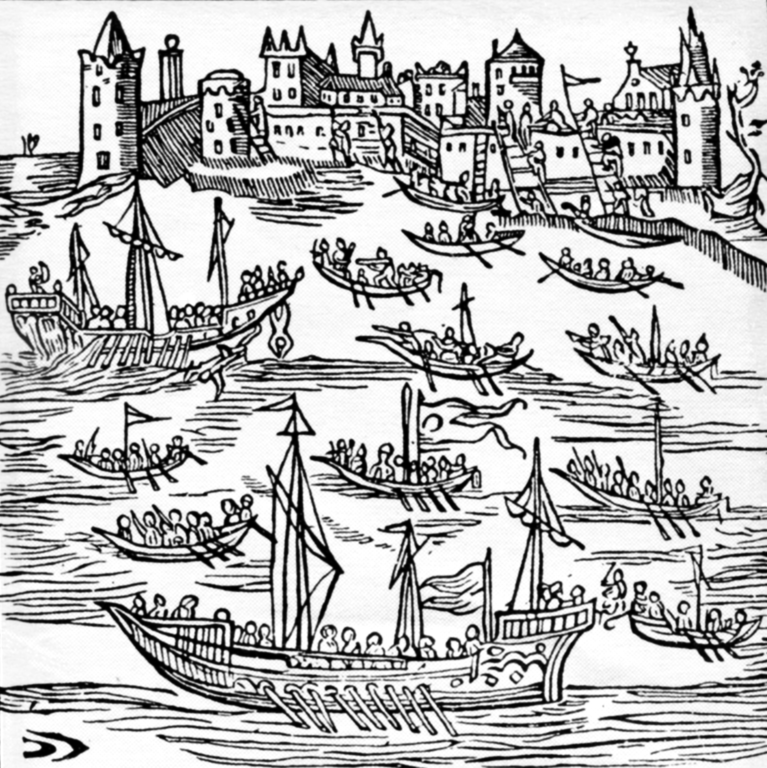 Cossacks on "gulls" under the command of Hetman P. Sahaydachny attack the Turkish fleet and capture Kafa in 1616.

Pan's oppression also increased significantly. Previously, the owners of the border, Ukrainian regions, one way or another, reckoned with ordinary people. Together with their subjects, they fought off the raids of the Crimeans. In order to populate the sparsely populated areas, the pans gave great benefits to runaway peasants from the interior regions, hiding them. Specially invited people to themselves. And the governors themselves, the elders and other representatives of power in Ukraine were usually Russian by faith and blood.

But gradually the situation changed. With the help of Cossack sabers, labor and sweat of the peasant settlers, the nobles amassed huge estates. The descendants of the former Cossack hetmans became the largest magnates in the Commonwealth. So, Vyshnevetsky owned 40 thousand peasant farms in the Poltava region, Zaslavsky - 80 towns and towns, 2 villages, Pototsky - Nizhyn starostvo and the city of Kremenchug, Konetspolsky 760 towns and towns, 170 villages in the Bratslav region, the Zholkevsky family belonged to a significant part of the Lviv region. The magnates had huge fortunes, their treasury was larger than that of kings. They had their squads and armies, sometimes stronger than the royal one. The masses of the poor gentry obeyed them.

The magnates felt free, confident, and the benefits for the "cattle" (forced "cattle", as the pans of ordinary people called) ended. The same serfdom was introduced as in the interior regions of Poland with exorbitant and various requisitions, corvée, the complete power of the gentlemen over the property, body and life of serfs-claps. The connection of Russian nobles by origin with the people was severed.

The magnates from South-Western Russia shone in Warsaw, set the tone at the Diets, successfully pushed through their interests and became completely Polish. They switched to Polish, forgetting the "muzhik" Russian language. Their children studied in Polish, Jesuit schools, converted to Catholicism. Newly converted Catholics became even greater and bitter enemies of the Russians (Orthodox) than born Catholics. A kind of Russian Janissaries. Russian by origin, but who went over to the side of the enemy, who became a tool in the fight against the remaining Russian world. At the end of XX - beginning of XXI centuries. the “Ukrainian Reich” was created according to the same scheme, pitting it against the rest of Russian civilization. 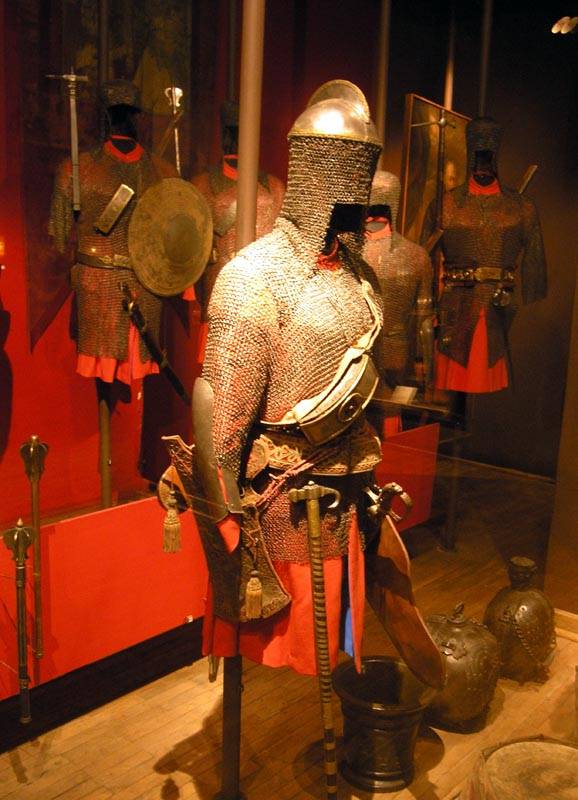 A chain mail armor with a misyurka was worn in Poland by hussars. Later, similar armor was worn by elite units of registered Cossacks, armored Cossacks

The Russians responded with uprisings. The core of the rebels were the Cossacks, as the most passionate (active) part of the people. Then other classes joined them.

In 1591, a detachment of registered Cossacks led by Krishtof Kosinsky attacked the White Church - the residence of the Bila Tserkva headman, Prince Janusz Ostrozhsky. The attack of the registered Cossacks was the beginning of a major peasant-Cossack uprising, which soon engulfed the Kiev, Volyn, Bratslav and Podolsk provinces. The Cossacks offered their service to Moscow, as Ivan the Terrible once did. Boris Godunov, who was the real ruler of Russia during the reign of Fyodor Ivanovich, agreed.

The Polish government did not interfere at first, considering it Ostrogsky's affair. Like, he broke firewood, let him disentangle. So, the September Sejm of 1592 rejected Ostrozhsky's request for help with the crown army, refused to impose a “banation” on the Cossacks and outlaw the gentry Kosinsky. Only in January 1593 was permission given for the collection of the commonwealth (gentry militia). Meanwhile, Kosinsky was smashing the gentry in Volhynia. The Cossacks were joined by small gentry, urban lower classes and peasants.

In a stubborn battle near the town of Pyatka (now Zhytomyr region), which lasted several days, the Poles defeated the rebels. A key role in the victory of the Poles was played by the squads of the "Ukrainian" magnates Ostrozhsky and Vyshnevetsky. The Cossacks were forced to sign an agreement and submit to royal authority. But, returning home, they rebelled again and asked Moscow to take them into their citizenship.

In May 1596, Kosinsky led the Cossacks to Cherkassy. However, he died: according to one version - in battle, according to another - he was treacherously killed during negotiations. The Cossacks continued the war and in August reached an agreement with Vishnevetsky. The arrest of the embassy of the Zaporizhzhya Army caused a new rebellion and attempts to besiege Kyiv. The Cossacks were forced to retreat because of the attack on their villages by the Crimeans, who were set on by the Poles.