October 25 2012
59
The current State rearmament program (GPV-2020) has quite “deep” and not entirely pleasant roots. The grandiose plans for the re-equipment of the armed forces are based not only on the country's desire to renew and modernize the material part of the army. Economic and political problems that arose shortly before the collapse of the Soviet Union are still felt to one degree or another. One of their consequences is the obsolescence of weapons and equipment. Over the past decades, one of the main areas of development of the armed forces is aviation. Practice has clearly shown that under certain conditions it is this kind of troops that can single-handedly solve a large number of combat missions. However, financial disasters have led to the fact that at present the Russian Air Force is technically something that combines the latest technology models and what was done back in the eighties. The need for a radical update is obvious. 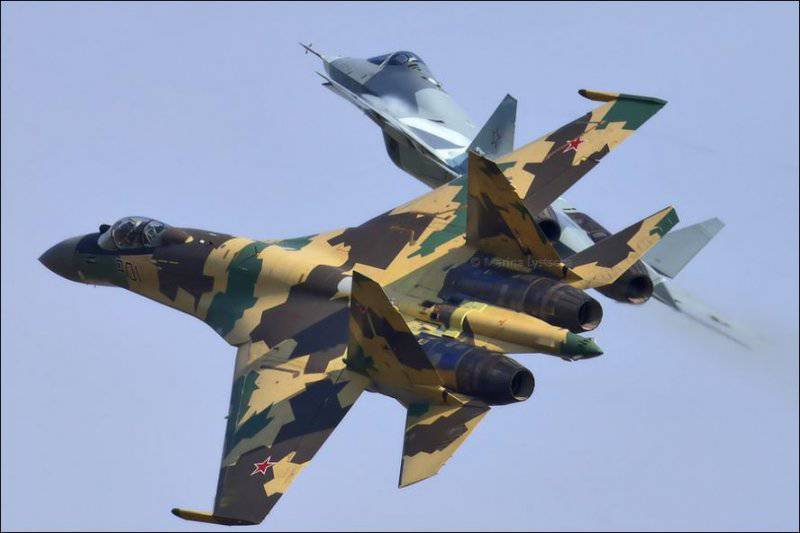 Looking at the statements of the military and political leadership about the planned and ongoing purchases of new aircraft equipment, willy-nilly, you come to the conclusion of catching up the lost time. It is worth quoting figures on the development and updating of the domestic Air Force over the past 10-12 years. Prior to the reform of the armed forces in 2008, the procurement and repair statistics were, to put it mildly, unsatisfactory. The smallest figures figured in relation to bomber aircraft. In the period from 2000 to 2008, the Russian Air Force received one (!) Strategic missile carrier Tu-160 and three Su-34 front-line bomber. It is worth noting that the obviously insufficient number of constructed “strategists” was compensated by diplomatic methods. At the beginning of the two thousand years, Russia still managed to get from Ukraine seven Tu-160 aircraft and three Tu-95MS, which became a payment for debts. The helicopters turned out to be a bit more successful: about ten new Mi-28Н, two Ka-50 and about fifteen multi-purpose machines of the Mi-8 family. In general, purchases of new technology in the period under review remained at the same level as in the nineties. However, the number of repaired and modernized machines increased significantly. Over the eight years, more than 110 aircraft and helicopters have undergone the necessary procedures. Yet such volumes are also not sufficient.

In addition to unsatisfactory purchases of airplanes and helicopters in the first twenty years since the collapse of the Soviet Union, several unpleasant tendencies took shape and stuck that directly affect the effectiveness of the military work of military pilots. The difficult economic situation did not allow to bring to mind a number of projects of guided weapons. Because of this, there is currently a lag behind foreign countries in the field of air-to-air missiles with an active radar homing head, tactical cruise missiles, guided bombs with satellite navigation, EW systems, etc. This problem, first of all, was caused by the lack of funding: choosing between new weapons and their carriers, the command made a choice in favor of the latter. Obviously, new aircraft can use old weapons, and the “compatibility” of new ammunition with old carriers raises certain doubts.

In the period from 2008 to 2012, the rate of equipping the air force with new equipment increased significantly, although it still could not be compared with the volume of supplies from the times of the Soviet Union. In the next eight years, until 2020, the rearmament of the Air Force will continue, and in the coming years it will pick up the main pace. In the next eight years, about four trillion rubles will be allocated to the needs of military aviation. It is quite obvious that with this money you can buy a huge number of airplanes and helicopters, as well as create and purchase new weapons. However, even huge amounts require competent treatment, so that allocations are spent wisely. The existing needs and requirements of the time force us to simultaneously make plans to re-equip units with different tactical roles, which in itself is not easy.

According to current plans, the greatest attention will be paid to front-line aviation. Before the notorious 2020 year, it is planned to bring and launch in a series of fighter T-50, created by the program PAK FA. First, more than a dozen pre-production vehicles will be manufactured, and during serial production until the end of the state program in 2020, the Air Force must receive at least fifty such fighters. After 2020, deliveries will continue. Another large order is associated with the aircraft of the previous generation. Su-35, belonging to the 4 ++ generation, is already being supplied to the air force. The current order involves the construction of 48 such fighters. In the future, it is possible to sign a new contract for at least fifty aircraft. The further fate of the Su-35C is mainly related to the progress of the T-50 project. The fact is that Su-35С is considered as a kind of temporary measure in anticipation of a full-fledged transition to T-50. Thus, the purchase of a large number of aircraft generation 4 ++ may simply be inappropriate. The list of purchased fighters closes the Su-30CM and Su-27CM3. Their total number will slightly exceed four dozen, but it is not worth waiting for a further increase in the order. The most massive new type should be the Su-34 front-line bomber. His tactical niche does not provide for a large number of projects with different characteristics, so over the next years he will become the main and then the only front-line bomber of the Russian Air Force. 129 machines have already been ordered and new contracts are possible. To date, the troops transferred a half dozen of such bombers. It is also worth mentioning the possible order of ten to fifteen Su-25 family attack aircraft in various versions. Finally, for the initial training of the future pilots, training Yak-130 is already being purchased. 18 such aircraft transferred to the customer, another fifty or under construction plans for construction.

The command of the Air Force and the Ministry of Defense also has big plans for the renewal of military transport aviation. The list of proposed and planned to purchase types of aircraft is quite long. For this reason, too, the main deliveries of transport aircraft will begin only after 2015. Deliveries of light passenger An-140 and L-410UVP have been started so far. The total number of these aircraft will be 40 units, a quarter of which have already been commissioned. In the future, after 2014-15, deliveries of heavy Il-76MD-90А transporters will begin in the amount of at least four dozen and 60 An-70. In addition, the purchase of twenty modernized An-124 Ruslan is possible, but with respect to this aircraft, all is not yet clear.

Already a few months ago it became clear that purchases of new long-range bombers are not currently planned. Tu-95MS and Tu-22М3 have long been discontinued and there is no point in restarting the assembly. Until recently, there were certain hopes regarding the Tu-160 - there was a reserve at the Kazan Aviation Production Association for the construction of a pair of such aircraft. However, further news The plans for the PAK DA project and the lack of reports on the purchase of Tu-160 allow us to draw the appropriate conclusions. At the same time, it is quite likely that before the end of the current state program, long-range aviation will not have time to receive a new vehicle at all. The fact is that the main funding for the development of PAK DA will begin only after a few years, and this significantly shifts the construction and testing of the prototype.

Helicopters were much more successful than strategic aircraft. In the plans before 2020, the supply of almost 350 rotary-wing machines is indicated. The contract for drums Mi-28Н implies the construction of nearly 170 helicopters. Ka-52, in turn, will be built in quantities of at least 180 units. It is worth noting that until recently, the Mi-28H was considered the most promising attack helicopter for the Russian Air Force. However, for several reasons, his main competitor, Ka-52, later became the subject of a larger contract. In addition, a number of Kamov helicopters will be ordered to equip the landing ships of the Mistral project. As in the case of fighters, the helicopter fleet is replenished not only with new machines, but also with upgraded ones. For these purposes, fifty Mi-35M helicopters, which are a deep modernization of the Mi-24, were ordered. Thus, prior to the construction of a large number of Mi-28H and Ka-52, the Russian air force will have time to update its fleet of vehicles with “transitional” machines.

In addition to combat helicopters, the Air Force also intends to receive transport. Last year, a contract was signed on 38 heavy MI-26, six of which have already been transferred to the customer. Multipurpose Mi-8, in turn, will be built in even larger quantities. Total orders up to 2020 will likely exceed 500 units. At the same time, new helicopters of a lighter class are not forgotten. Thus, six Ka-226 have already been assembled and in the near future three dozen more such helicopters will be made, there are contracts for the supply of X-NUMX's Ansat, and the possibility of acquiring hundreds of Ka-32 is also being considered.

Simultaneously with the purchase of new equipment will be upgraded old. This method is planned to achieve long-range aviation. Before 2020, repairs and upgrades will take place over a dozen missile launch vehicles Tu-160 and thirty Tu-95MS and Tu-22М3 each. In addition, about forty IL-76 old modifications (to the IL-76MDM state) and two dozen An-124 Ruslan will be updated in the sector of aircraft. Frontal aviation will not remain without attention. The Su-24M bomber and the Su-24MR reconnaissance aircraft in the amount of about a hundred units will be completed, and the 10-12 MiG-25РБ reconnaissance aircraft will also receive the new equipment. It is possible to continue upgrading Su-27 fighters to Su-27CM status. Work has already begun on upgrading MiG-31 interceptors (up to the “BM” version) and Su-25 attack planes (up to the “SM”), as a result of which 120 of each type of aircraft will receive new capabilities. Finally, A-50 long-range radar detection and control aircraft will be repaired and retrofitted in accordance with version A-50U.

As we see, the Ministry of Defense has huge plans for the next eight years. Mastering four trillion rubles will be associated with some specific problems, primarily of a production nature. Over the years of downtime and insufficient production volumes, enterprises in the aviation industry have lost some of their potentials. In addition, lost years had a negative impact on technological development. Thus, at first glance, the usual purchase of new equipment turns into a multi-pass combination with the restoration of enterprises, the updating of production equipment, the creation of connections between plants, etc. It is quite obvious that all this will be very difficult, long and expensive. But there is no choice anymore: such things have not been done for a long time, therefore the State program of rearmament has a corresponding priority.

In addition, it is necessary to recall the need to create new weapons, first of all, guided. In a number of areas of this class weapons we are behind the world leaders. However, this lag has some advantages. The leading countries of the industry have already managed not only to develop their latest-generation guided weapons, but also to test them in the real conditions of a modern war. Accordingly, the Russian military and engineers will not have to spend a lot of time and effort on determining the appearance of the most promising weapons. Nevertheless, even such pleasant facts are unlikely to simplify the rearmament of the army in general and the air force in particular. The state program still requires a huge investment of effort, time and money.