Joint military group in Belarus. The first real statement of the Union State 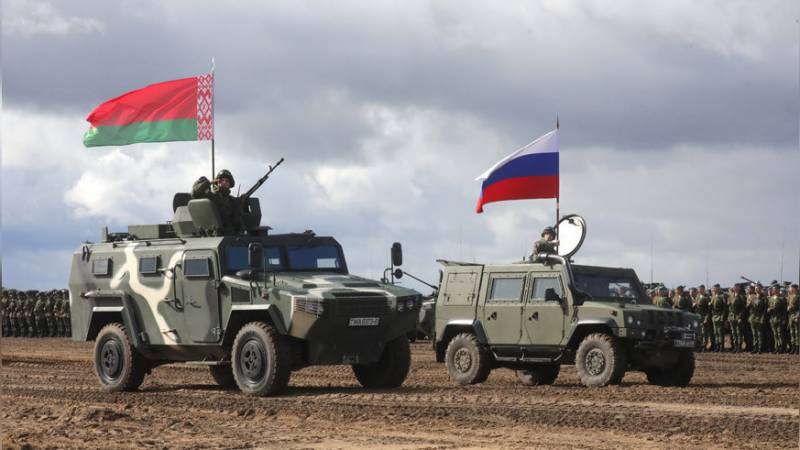 
I don't think anyone doubts our victory in Ukraine. Even the Ukrainians themselves do not doubt it. Judging by what is leaking to the press, even their president and government have no hope for their own strength. All hopes for the help of the global West. Expectations and understanding that very soon this West will not care about Ukraine at all.

The US election is less than a month away. And the result of these elections is not yet clear. The Democrats, taught by the bitter experience of the presidential elections, will definitely take into account the mistakes of the past, and the Republicans will shamelessly use the administrative resource. In Europe, voices about the change of governments and presidents are being heard louder and louder. Winter hasn't started yet...

History, as the only science of the future, predicts the next "cutting the carcass" of the loser. Any hunt ends with this. Any war results in losses on one side and gains on the other. Territories, population, economy, culture and everything else. Moreover, not always only the winners take part in the carcass division. In the euphoria of victory, no one pays attention to the scavengers. And they tear the flesh of the vanquished even more than the victor.

The unenviable fate of the former large European country

Does anyone today doubt that some countries today dream of returning their territories that were lost after the Second World War? Someone will doubt that Poland is sleeping and sees Galicia in its composition? I do not think that Romania has forgotten about Bessarabia and Northern Bukovina. Yes, and the Hungarians remember about Transcarpathian Rus.

And as it turned out recently, after the speech of President Lukashenko, the Belarusians also did not forget about the territories they once lost. It's stupid to even think about Russia. We not only remember, but actually return our own. We can already say that the process of disintegration of Ukraine has been launched.

Even when the Ukrainian people chose a clown instead of the presumptuous oligarch Poroshenko without any program and vision for the future of Ukraine, we wrote about the possibility of just such a finale. But then the Ukrainians very often used in their comments the Russian proverb about horses that cannot be changed at the crossing. I am not against folk wisdom, but I think that the saying should be slightly expanded. Horses are not changed at the crossing, but donkeys can be changed.

A quite reasonable question arises as to how, for example, Poland can regain Lviv. The answer is simple enough. Exactly the same as we returned the Donbass. Either the conclusion of an agreement with Zelensky on the transfer of these territories under the protection of Poland, or the decision of the leadership of the Lviv region on the formation of their own state and the conclusion of relevant agreements.

Technically, this is quite simple, given the fact that a fairly large number of officials already have Polish citizenship or a Pole's card. Hungarians and Romanians can do the same. Thus, we get three NATO countries, which, in the hope of the power of the alliance and the notorious 5th article of the Treaty, will tear their piece from Ukraine.

However, in my opinion, confidence in their own strength and security of these states was rather strongly shaken by Russian shelling of Ukraine's infrastructure. It turned out that the vaunted Western missile defense and air defense systems work well on old Soviet missiles. With the Russians, they have big problems. And how quickly Ukraine was “returned” to the beginning of the XNUMXth century seems to have really frightened the West. It turns out that the economy can be undermined very simply. No energy - no economy.

It's scary to touch Belarus

The West has long perceived Minsk as a needle that is safe exactly until the moment it disappears. And then it becomes scary that she can get drunk in the most unexpected place and at an extremely unexpected time. Theoretically, it is possible to slam Belarus. If not for Russia and our union treaty.

Yesterday, the chairman of the State Security Committee of Belarus, Ivan Tertel, expressed an interesting opinion on the NWO. On the one hand, this statement does not carry any intrigue, but on the other hand, no one doubts the competence of the KGB of Belarus, and the head of the KGB never makes any statements if he does not have the relevant information:

“If the Russian Federation conducts a qualitative mobilization, provides its grouping with technical means and advanced weapons, then the hostilities will enter a key phase. We estimate that there will be a tipping point between November this year and February next.”
It seems that what does this statement have to do with Belarus? None. And if we add to this statement the statement of President Lukashenka? I mean the statement about the creation of a joint military group on the territory of Belarus. And the following statement by Defense Minister Viktor Khrenin:

“In case they attack us. If at least one meter of Belarusian land is subjected to aggression. As was said by the commander-in-chief, the answer will be immediate and harsh. Therefore, we once again warn against provocations. You don't want war with us - we don't want it either."
The conversation and even obligations to create a joint armed forces were written down in the union agreement. But this topic was hushed up for a long time, and the implementation of this clause of the agreement was limited to talks and projects. And suddenly, for many, a statement by President Lukashenko sounded unexpected.

Several thousand Russian soldiers (in the version of the Belarusian president, more than one thousand) will be deployed on the territory of the republic. This is despite the fact that today the number of Belarusian Armed Forces is about 70 thousand people, of which about 10 thousand are conscripts. Aviation? Approximately 200 combat aircraft. Let's add here 600 Belarusian tanks (plus approximately 1 in storage). Agree, a significant increase for the defense of the country.

Judging by the Polish press, the West was really frightened by another figure, voiced by Alexander Lukashenko. 500 thousand bayonets in a short time! This is a very real figure in the event of a general mobilization. The plans of the gentry did not include in any way to resist such an army. Although everyone is well aware that, most likely, this will not happen. More precisely - will not have time to happen ...

Now touching Belarus has become scary even for the Poles. And such plans were and are.

Poland should become the next "victim" of Russia

Have you ever paid attention to how calmly Washington, and especially the Pentagon, reacts to rather serious losses of the Armed Forces of Ukraine? Loud statements by politicians of the second echelon, concerns, promises and... nothing. Some meetings, some agreements, pressure on Western countries. Everyone is well aware that the United States is removing competitors and enslaving Europe.

I have already written that globally Washington no longer needs Ukraine. The Moor has done his job, and now no one cares what fate awaits him (her - Ukraine). No one planned to fight for this country. What Western politicians have said many times. It was noticeable even to the naked eye. But the question arises why?

Who is the favorite wife of Americans today? Poland! We have become so accustomed to the American interpretation of Warsaw's role in Europe that we have stopped looking into the distance. Warsaw is fighting for leadership in Europe!

But let's look to the future. Do Americans need a strong country in completely enslaved Europe? Do we need a "new Germany" there? Unfortunately no.

The US needs the next Ukraine. The next state they plan to destroy after taking over Europe. Where does it come from? Let's remember who and with whom competes for leadership in the world. Who are the main enemies of Washington? And where is Poland?

It's even easier with friends. The United States has no friends, only vassals.

The adventure in Ukraine and with the sanctions failed. In the first case, the Russian army turned out to be stronger than the NATO one, in the second case, sanctions rather played a positive role for the Russian economy, making it more autonomous, independent from the West. The negative, with the exception of the EU, was distributed approximately equally. Problems began both in Russia and in the United States.

Briefly about what happened

As always, let's try to draw some conclusions from what happened.

First of all, there are rumors that the army of Belarus will nevertheless take part in the NVO. What for? Russia is doing quite well on its own. We really have nowhere to hurry. Let's gather strength, wait for the time when all this wheeled and caterpillar European equipment will sink in the Ukrainian black soil, and strangle NATO and their hangers-on right in the field.

In addition, Belarusians in the steppes of Ukraine are the “blue dream” of Kyiv. The open participation of Minsk in the NWO will give an imaginary, but still a trump card to Kyiv in the matter of increasing supplies. We would have coped with Russia even today, but also with Belarus - it will not work! The logic is clear. I am sure that in this case, Kyiv may require Poland and the Baltic States to help through provocations at the borders. To divert part of the Belarusian army to yourself.

This does not mean at all that Zelensky will not do anything. He will not fight openly. Here you can understand Ukraine, when it blew up almost all the bridges in the border areas and mined the border areas. However, no one has canceled the tactics of using the DRG, proven in the east. I think that in many ways it was with this in mind that President Lukashenka's speech was quite tough.

In any case, Minsk is turning its main attention, and in my opinion quite rightly, to Poland. I already wrote about the oddities in the supply of American weapons to Ukraine. Some of them are simply lost somewhere in Poland. Ukrainian corruption...

But even without this, we see an increase in the number of Polish units on the border. We notice an increase in the military budget and an accelerated purchase of equipment. Not to mention the constant begging of at least some American units from the Pentagon.

So, the new joint military grouping on the territory of Belarus is, in my opinion, a mirror response to the actions of Poland and, most likely, the Baltic states. Let's look at the placement of units and subdivisions. I think that it is this group that will become the "executioner" who will punish the aggressors. Whether it be the Poles, the Balts, or, but this is still worth allowing because of the complete inadequacy of Zelensky - Ukraine.