Kazakhstan and the lure of Pan-Turkism 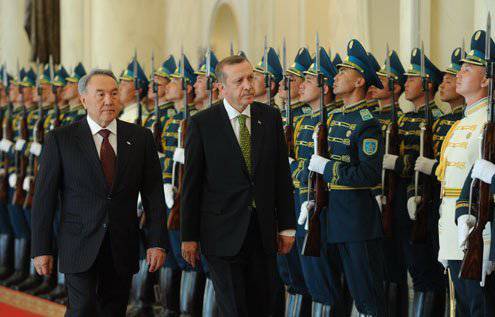 About how confidently President of Kazakhstan Nursultan Nazarbayev implements the literary heritage of L.N. Gumilyov, popularizing and promoting the Eurasian unifying idea, is well known. The leaders of three former Soviet republics who were ahead of him in the run to the “Belovezhskaya Sauna” did not allow N.Nazarbayev to enter the history as a destroyer, but they gave him the opportunity to designate a perspective historical dimension of geopolitical processes in Eurasia - the creation of a new integration association ....

The need to maintain friendly, partnership relations between Russia and Kazakhstan Nazarbayev has defended and is upholding to this day. In the matter of creating a modal legislation of the CIS, creating the CSTO, signing a so-called. “Treaty of Four” (29 March 1996), the role of the leadership of Kazakhstan is difficult to overestimate. In December, 2011, in Moscow, with the support of Astana, a serious Protocol was signed on the deployment of military infrastructure in the territories of the CSTO member states.

At the same time, a year after the creation of the Customs Union, perhaps, the greatest resistance from business structures and a number of political groups began to emanate from Kazakhstan, where the opposition even initiated a referendum on suspending state participation in this organization. Nazarbayev repulsed these attacks easily.

It is difficult to stop practical steps to integrate not only the states, but also the subjects of the federation and regional centers of Kazakhstan, which was confirmed by the September Pavlodar meeting of V.Putin and N.Nazarbayev and representatives of the regions of the two countries. Even timid attempts by the Russian community to draw attention to the real situation with Russian-speaking education and the permanent growth of nationalist sentiments in Kazakhstan did not prevent integration moods.

And October 7 2012 of the year Nazarbayev signs the Law of the Republic of Kazakhstan “On ratification of the Protocol on the creation of a common insurance market of the member states of the Eurasian Economic Community”. A joint military exercise of the CSTO “Indestructible Brotherhood-2012” begins in Alma-Ata. And so…

Signals that there are problems inside the state machinery of Kazakhstan appeared as early as September, when Secretary of the Nur Otan Presidential Party Yerlan Karin called the President’s initiative to create the Eurasian Parliament, announced at the end of 2011, “only the desire of the Russian side”. Karina was supported by Nazarbayev’s political adviser Yermukhamet Yertysbayev. The statements were interpreted by experts as sanctioned from above.

And all this time, the rhetorical fountain of the Kazakh nationalist political scientist Aidos Sarym did not dry up, who in the republic is considered a product of the presidential administration. Sarym is known for his concept of the “only alternative” to Kazakh Islamism - Kazakh nationalism. In his article Naryshkin Labor, Aidos launched an attack on the idea of ​​the Eurasian Union: on inter-ethnic relations within the country. ” Hotly supported by like-minded people in social networks, Aidos Sarym calls the integration model “flawed and unrealizable” and says: “The idea of ​​a vehicle will eventually suffocate, just as the idea of ​​the CIS together with its Parliamentary Assembly and thousands of agreements and treaties. The Customs Union, which has already proven its inefficiency and disadvantage for Kazakhstan, will collapse under the pressure of circumstances and public opinion ... We are doomed to be neighbors. But what are we neighbors like? Will you respect your arrogant, non-respecting neighbor on the landing? Rejoice when meeting, stretching his hand, knowing that he once caused you a lot of grief? Not just caused a lot of grief, but also claims that it should be so? ... What kind of confidence can we say if the majority of Kazakhs consider the Customs Union to be the reincarnation of the USSR, the red empire? They are frankly afraid of him ... ”(Business Kazakhstan World magazine, No. XXUMX-5 (6-23), May-June 24). This is written by a man who is called "the court nationalist of Nazarbayev" and who himself calls himself "an ardent supporter of Turkic integration."

The Istanbul-speaking Nazarbayev’s October 12 speech, spoken under the fluttering flags of Kazakhstan, Azerbaijan, Kyrgyzstan, and the Republic of Turkey, has roots in Kazakhstan itself. However, there were new notes in the speech.

President Nazarbayev rarely allowed himself to hint at the historical memory insulted by Russian imperialism, but here (in Istanbul) he remembered what had been killed, though not by Russians, but by the Kenesary-khan Kokands. ("After the last Kazakh Khan was killed in 1861, we were a colony of the Russian kingdom, then the Soviet Union. For 150 years, the Kazakhs almost lost their national traditions, customs, language, religion"). Although it is not sensible to consider this a sensation, having a quick look at the school curriculum of the history of Kazakhstan. Already there claims to Russia - half a textbook.

Cannot be considered special news and the message that “between the White Sea and Altai lives more than 200 millions of our fellow tribesmen. If they united, we would become a large and influential state in the world. ” For years, Nazarbayev has been building ideological substantiations of the greatness and significance of the steppe people for years, widely using direct references to Turkism in rhetoric and politics. Suffice it to recall his initiatives to create the Turkic Council, and the Eurasian National University. L. Gumilev in Astana is adjacent to the Turkic Academy.

Theses about the economic necessity of Pan-Turkism sounded more alarming. Nazarbayev calls the low volume of trade “not conforming to our relations, our closeness [to relations and closeness with Turkey - V.Sh.]” and declares the maximum opening of its market for Turkish business. And behind the economy there is always politics. It is likely that, in contrast to the project of the Eurasian Economic Union, initiated by Russia, there will be a raw, but quite appetizing for some anti-Russian Turkic integration project.

Of course, the call of the Turks to unite looks somewhat naive, as if Hugo Chavez proposed to unite to all the descendants of the civilization of the Incas and Aztecs. A banal question arises, where will the center of attraction and association of the Turks be? In Astana? In Baku? In Bishkek? In the Stambul? On Ararat or in the area of ​​the sacred mountain of Khan-Tengri?

Undoubtedly, the speech of Nazarbayev was enthusiastically accepted among the national patriots. However, while the “Istanbul theses” cause more skepticism. Relations in the “fraternal Turkic Central Asian environment” can rather be called restrained tensions rather than “good neighborly relations”. Otherwise, why should Kazakhstan increase its military grouping in the Caspian Sea and show nervousness around the militarization of Uzbekistan? Do not add optimism and almost turned into a war, the issues of water energy.

The most acute problem of “intra-Turkic relations”, which is hardly possible to solve in the foreseeable future, is the factor of the Islamic-extremist threat, which originates for Kazakhstan from the territories of its southern neighbors.

Supporting today's “pan-Turkism” of Kazakhstan is unlikely to be a self-sufficient Turkmenistan and alarming as a hive, Tajikistan. Nazarbayev’s bold ideas can irritate Beijing, for whom “pan-Turkism” and separatism in Xinjiang are one and the same.

In addition, statements made in Istanbul can complicate Kazakhstan’s relations with a “non-Turkic” Iran and Iraq. Baghdad seriously engaged in preserving its territorial integrity, made it clear to Ankara that he did not want the Assad regime in Syria to fall, and expressed his protest to Turkey over the unauthorized visit of Turkish Minister Ahmed Davutoglu to Iraqi Kirkuk. The Iraqi Parliament also intends to put to the vote a decision canceling the agreement with Turkey, allowing its military presence in the north of Iraq. It is unlikely that the warming of relations between Astana and Ankara, some, even if contrived, condemnation of Damascus will receive approval in Baghdad and Tehran.

The danger of a “new Pan-Turkism” comes, of course, not from the moldy ideas of Ismail Gasparinsky, Enver Pasha and Ataturk. The key word in this term is “new”. Kazakhstan is fundamentally important for US geopolitics, which for almost a decade has been modeling situations of instability in this country - from organizing strikes and “Zhanaozen” to provoking inter-clan struggle of clans and “soft patronage” of Islamist-Salafists. And the presence in Kazakhstan in the role of "economic adviser" (!!!) of the former British Prime Minister Tony Blair directly indicate the Anglo-Saxons' ears.

The United States energetically plays its solitaire in Central Asia, promising support (weapons and investments) to Islam Karimov, then flirting with Astana, when the words that Kazakhstan "can play a leading role as an investor in regional infrastructure projects" are heard from the mouth of US Assistant Secretary of State Richard Boucher.

As you know, 28 June 2012 of the year Tashkent has already sent a note with a notification of the suspension of Uzbekistan’s membership in the CSTO, and this is the success of the Obama administration. It is possible that the version of the new union of old friends of the United States (Turkey and Azerbaijan) with new Kazakhstan and Kyrgyzstan is also the fruit of the works of overseas thinkers.

However, explanations and hints about incorrect interpretations and inaccurate translation of Nursultan Abishevich’s Istanbul speech have already been heard from the Presidential Administration of Kazakhstan. The East has always been full of tricks and surprises ...