October 26 2012
5
In developing the RBS-70 MANPADS, the Swedish Armed Forces put forward the following requirements: a long interception range on a collision course; high probability and accuracy of destruction; resistance to known natural and artificial disturbances; command control on the line of sight; the ability to work on targets to the surface of the earth; the possibility of further development of the complex for use at night. The company "Saab Bofors Dynamic's" focused on the version with laser-guided missiles. RBS-70 the world's first portable anti-aircraft missile system with such a guidance system. The complex was developed from the very beginning with the prospect of installation on a tracked and wheeled chassis. 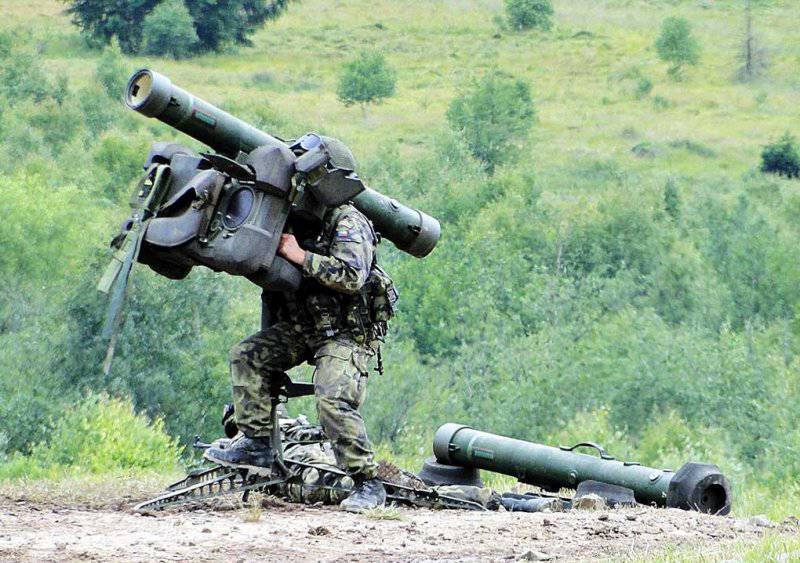 Work on the complex began in 1967 year. The first samples were tested after seven years. In parallel with the fire part, the development of radio engineering, in particular, radar detection and target designation PS-70 / R, was carried out. MANPADS RBS-70 in 1977 year adopted. The complex occupied a niche between the 70 mm L40 artillery mounts and the Hawk medium-range anti-aircraft missile system. RBS-70 in SW Sweden was intended to provide protection units link "battalion-company".

In the 1981 year we developed the first mobile version of the complex based on "Land Rover" - all-terrain vehicle. Subsequently complex RBS-70 mounted on various tracked and wheeled armored vehicles.

Since 1998, the modernization of all elements of MANPADS has been carried out with the introduction of a new standard of information transfer to create a single information space of the air defense system.

During the existence of the MANPADS, about 1,5 thousand launchers and more than 15 thousand missiles of all modifications were fired. Today, the RBS-70 man-portable air defense system is in service in the armies of Australia, Argentina, Bahrain, Venezuela, Indonesia, Iran, Ireland, Norway, the United Arab Emirates, Pakistan, Singapore, Thailand, Tunisia, Sweden and some other countries. Is used both in the Army and in the Navy, Air Force and Marine Corps.

According to Saab Bofors Dynamic's, at the end of 2000, the total number of missile launches was 1468, more than 90% of the targets hit. 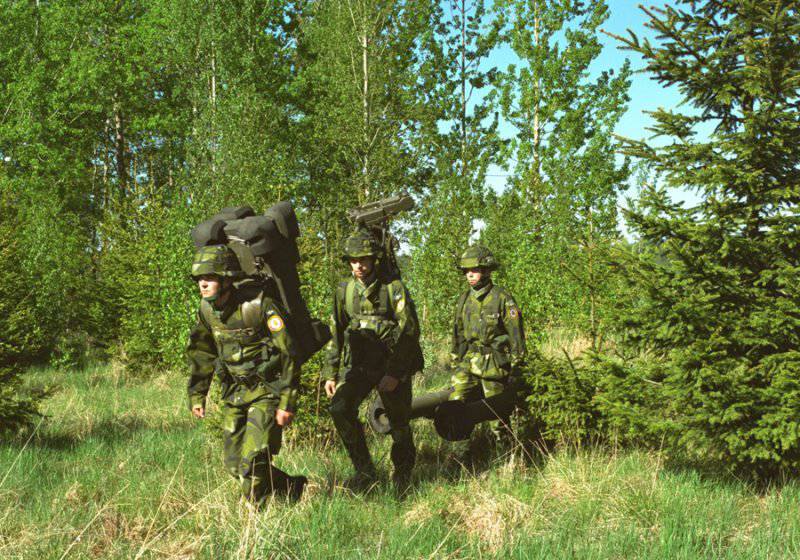 At the London International Arms Exhibition, DSEi-2011, a modernized MANPADS was demonstrated, designated RBS-70NG. The new complex with the latest generation Bolide multipurpose missile can counter a wide range of land and air threats, including helicopters, airplanes, cruise missiles, unmanned aerial vehicles and armored vehicles. The night vision sight and integrated thermal imager make it possible to hit enemy targets night and day in difficult climatic and meteorological conditions. Automatic target detection and three-coordinate target designation reduce reaction time, and the auto-tracking system facilitates target acquisition by the operator and increases the likelihood of hitting at all flight ranges of the missile defense system.

The composition of MANPADS RBS-70

When launched, the Rb-70 rocket is ejected from the container at a speed of 50 meters per second. Then, a sustained rocket engine is launched, operating for 6 seconds and accelerating the rocket to supersonic speed (M = 1,6). At this time, the operator must keep the target in sight of the stabilized sight. The emitted laser beam guidance unit, forms a "corridor", in the center of which the missile moves. The low power used by the complex and the absence of radiation before the launch of the rocket make it difficult to detect RBS-70 MANPADS. Command operator guidance increases noise immunity and allows the missile to strike vigorously maneuvering targets.

Although each PU can be used independently, the main use case is the use of RBS-70 MANPADS with PS-70 "Giraffe" pulse-Doppler radar, which operates in the 5,4-5,9 GHz band and provides a detection range of aerial targets up to 40 thousand meters, range tracking - 20 thousand meters. The antenna of the radar station rises on the mast to a height of 12 meters. Radar PS-70 "Giraffe" can be installed on different chassis, including all-wheel drive three-axle truck Tgb-40, tracked conveyor Bv-206, etc. The deployment time of the radar station - no more than 5 minutes. The calculation of the station consists of 5 people, providing in manual mode, tracking 3 targets, while serving up to 9 fire calculations.

Target data is sent to the combat control console, from where it is sent to specific launchers. In this case, the operator of the missile complex receives information about the target in the form of a sound signal in the headphones. The tone of the signal depends on the position of the target relative to the installation. MANPADS reaction time - 4-5 seconds.

A typical operator training course using the simulator takes from 15 to 20 hours, which are distributed over 10-13 days.

The anti-aircraft missile is executed according to the normal aerodynamic configuration and is equipped with a two-stage solid propellant sustainer engine, which is located in its middle part. In the nose compartment is a warhead, the undermining of which can be produced by shock or laser proximity fuses. The target is affected by a shaped charge (armor penetration - up to 200 millimeters) and prefabricated spherical elements made of tungsten. Receivers of laser radiation are located in the tail section of the guided missile.

Last production version of surface-to-air missile - Rb-70 Mk2. The field of view of the laser receiver increased to 70 degrees made it possible to expand the area of ​​capture by 30-40 percent. Despite the fact that the rocket was equipped with a large-sized main engine, as well as a more efficient warhead (the number of tungsten balls increased from 2 to 3 thousand, the explosive mass increased), due to the miniaturization of electronic elements, the mass and size of the guided missile remained the same. Range destroy air targets -. To 7 thousand meters, average and maximum speed missiles flying rose. The probability of hitting a Rb-70 rocket with the Mk2 of subsonic targets on a collision course is from 0,7 to 0,9, while in the catch-up courses - 0,4-0,5.

At 2002, the batch production of the Bolide anti-aircraft missile system RBS-70 was planned for the year. Bolide is a deep modification of the Rb-70 Mk0, Mk1 and Mk2 missiles. The rocket is designed for use with existing installations. The purpose of this rocket was to increase the ability of the missile complex to deal with energetically maneuvering and unobtrusive targets, such as the CD. The rocket installed new components: fiber optic gyroscope, reprogrammable electronics, improved solid-propellant rocket engine. Improved remote fuse (introduced two modes - for large and small purposes) and warheads. Shelf-life anti-aircraft guided missiles in transport-launch canister reaches 15 years. The new power supply fuse does not require and complies with the MIL-STD-1316E standard. 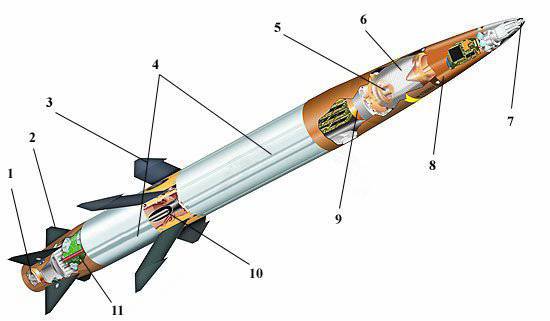 The composition of the launcher RBS-70 includes:
- anti-aircraft guided missile in the transport and launch container (total weight 24kg);
- guidance unit (weight 35 kg), consists of an optical sight (from the field of view 9 degrees and 7-fold increase) and a laser beam forming device (there was an adjustable focus);
- identification "friend-foe" (weight 11 kg),
- power supply and tripod (weight 24kg). 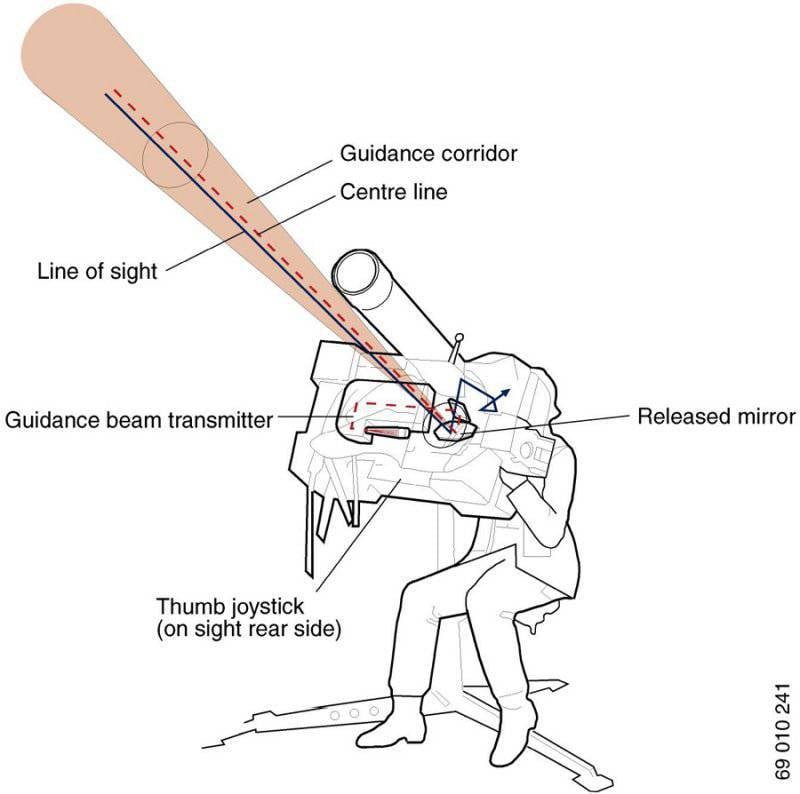 The principle of targeting MANPADS RBS-70

It is possible to connect the Clip-on Night Device thermal imager (COND), which is attached to the launcher, allowing the use of the missile system without degrading performance in the dark. The imager's wavelength range is 8-12 µm. The imager is equipped with a closed cycle cooling system.

Elements RBS-70 are placed on a tripod. In its upper part there is a container with a guided missile and a mount for the guidance unit, and in the lower part there is a gunner’s operator’s seat. To deploy the launcher is required 10 minutes, cooldown - 30 seconds. To carry the RBS-70 MANPADS, enough 3 people.

In many cases, in order to increase the mobility of the RBS-70 complex, it was installed on tracked or wheeled chassis. For example, in Iran, the Land Rover was used as a chassis, the Commando V-200 wheeled armored personnel carrier was used in Singapore, and the M113A2 tracked armored personnel carrier was used in Pakistan. Mounted on a particular chassis, the RBS-70 complex was removed in a short time for use as a portable anti-aircraft missile system. 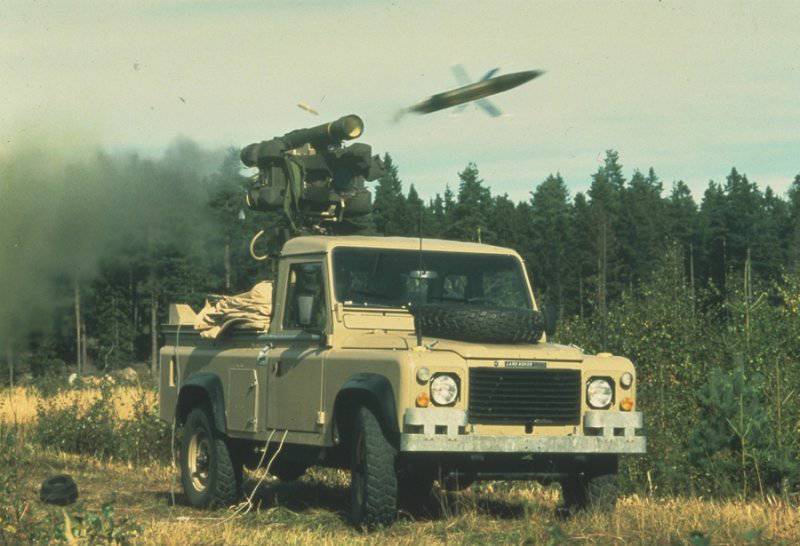 The Swedish armed forces use a self-propelled version of the RBS-70 - Lvrbv 701 (Type 701). Elements of the complex are installed on the chassis of the tracked armored personnel carrier Pbv302. Transfer time from marching to martial status - no more than 1 minutes. The RBS-70 complexes are also used as a means of naval anti-aircraft defense. In the Swedish naval forces, for example, the RBS-70 are part of the armament of the Styrso patrol boats and the M-80 type minesweepers. The launcher is the same tripod as for the ground version.

Advantages and disadvantages of RBS-70

In comparison with modern portable anti-aircraft missile systems with ultraviolet and infrared homing heads (Mistral, Eagle, Stinger), the RBS-70 complex significantly wins in firing range, especially on a collision course. The ability to hit targets outside of 4-5 km enables RBS-70 to provide air defense in cases where other MANPADS cannot. The main disadvantage of the complex is a large mass (the launcher and two anti-aircraft guided missiles in transport and launch containers are “pulled” by 120 kg). To deliver such a "portable" complex to the desired point you need to use vehicles, or mount it on the chassis. RBS-70 cannot be applied from the shoulder, applied or transferred under field conditions by one person, which is also not always acceptable (one of the reasons why this MANPADS lost the tender in South Africa). 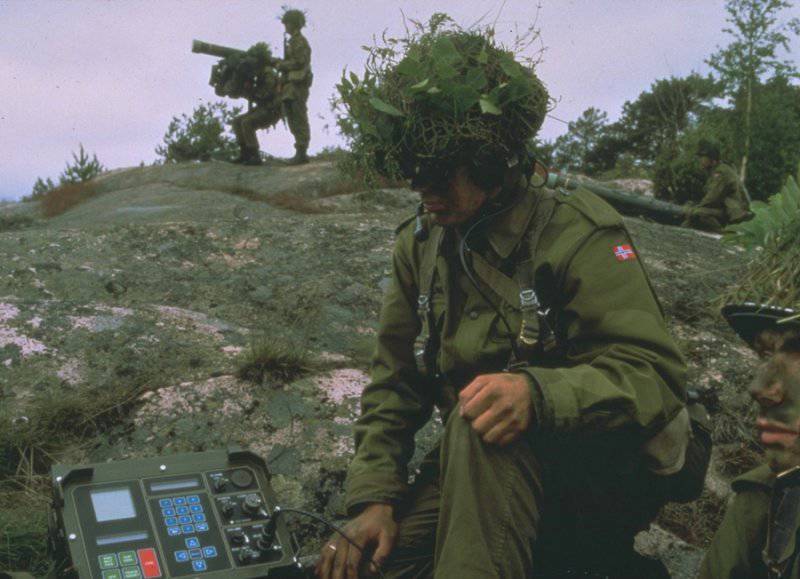 The command method of guiding an anti-aircraft guided missile gives RBS-70 specific features, including the ability to effectively deal with targets flying at low altitudes, better noise immunity, but at the same time calculation vulnerability, as well as high requirements for preparation of the calculation. The operator needs to quickly estimate the distance to the target, the height, direction, and speed, for a decision on missile launches. Accompanying the target takes from 10 to 15 seconds, requiring accurate and fast action in the face of significant psychological stress.

The advantages of the complex should also include its relatively low cost - about half the cost of a portable anti-aircraft missile system "Stinger".

RBS-70 in real combat was used only in the Iran-Iraq military conflict in 1980-1988. In the Iranian armed forces, the complex occupied a niche between the Chinese copy of the Soviet Strela-2 MANPADS and the American-made Hawk medium-range anti-aircraft missile system. RBS-70 appeared on the battlefield in January-February 1987. The high mobility of these systems has allowed to organize an ambush on the likely routes of Iraqi Air Force aircraft. It is believed that it was the RBS-70 MANPADS that destroyed most of the 42 (according to other sources - 45) aircraft lost by Iraq. 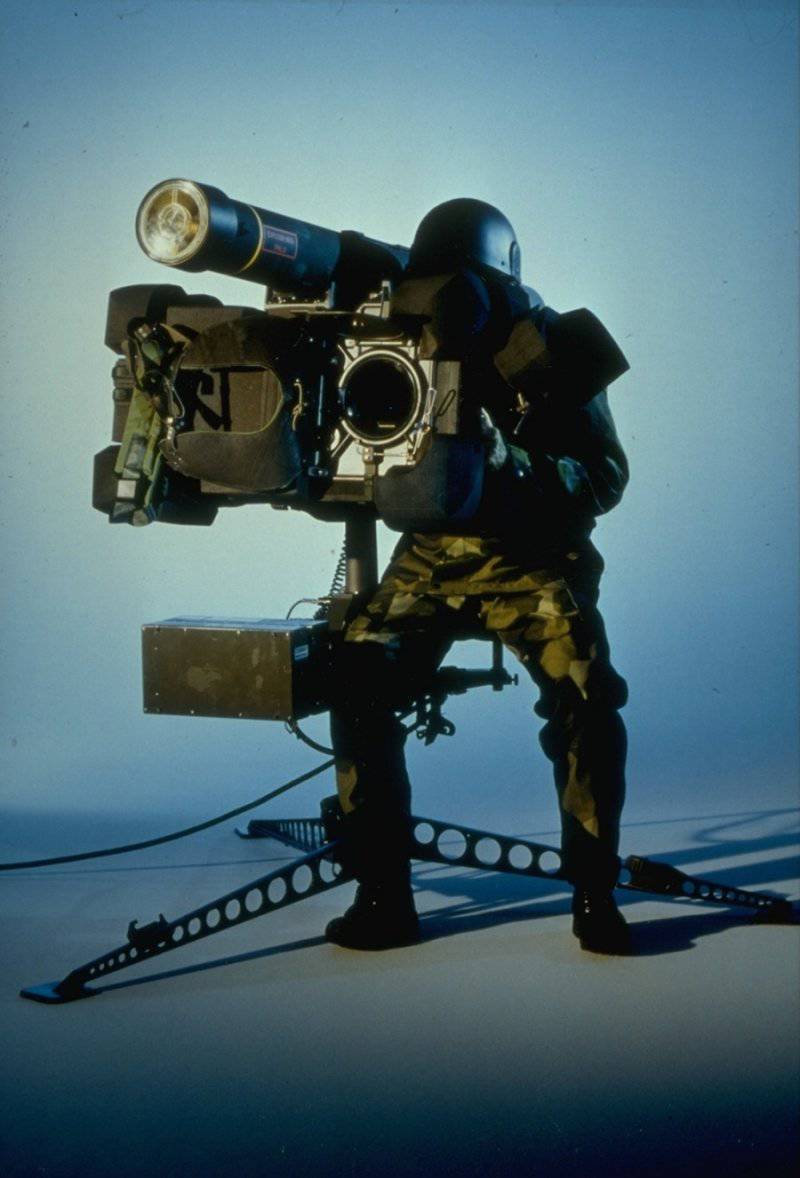