The head frigate of the Russian Navy "Admiral Gorshkov" launched 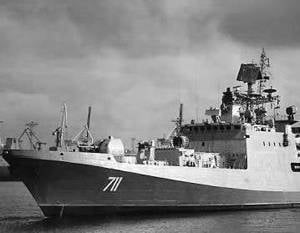 This is the first post-Soviet ship far sea zone. At the moment, ship readiness is 40%.
The frigate "Admiral Gorshkov" of the 22350 project, developed by the Northern Design Bureau, was laid down at the "Northern Shipyard" in February of the 2006 year. The ship is scheduled to be transferred to the fleet in 2011.

Ships of this type will be armed with cruise missiles capable of striking both the coastal zone and enemy ships. The frigate has no restrictions on the cruising range, reports RIA "News».

In the future, the frigates of this project will be included in the combat composition of all four fleets of Russia, and the need for the Russian fleet in ships of this class ranges from 20 to 30 units, representatives of the Navy said earlier. They added that the frigate of this project will become the main class of the surface ships of the Russian Navy in the ocean zone in the twenty-first century, since it has universal capabilities for performing tasks both in single voyage and as part of groupings.