Balanda for the Chinese emperor. From Mukden to Tokyo 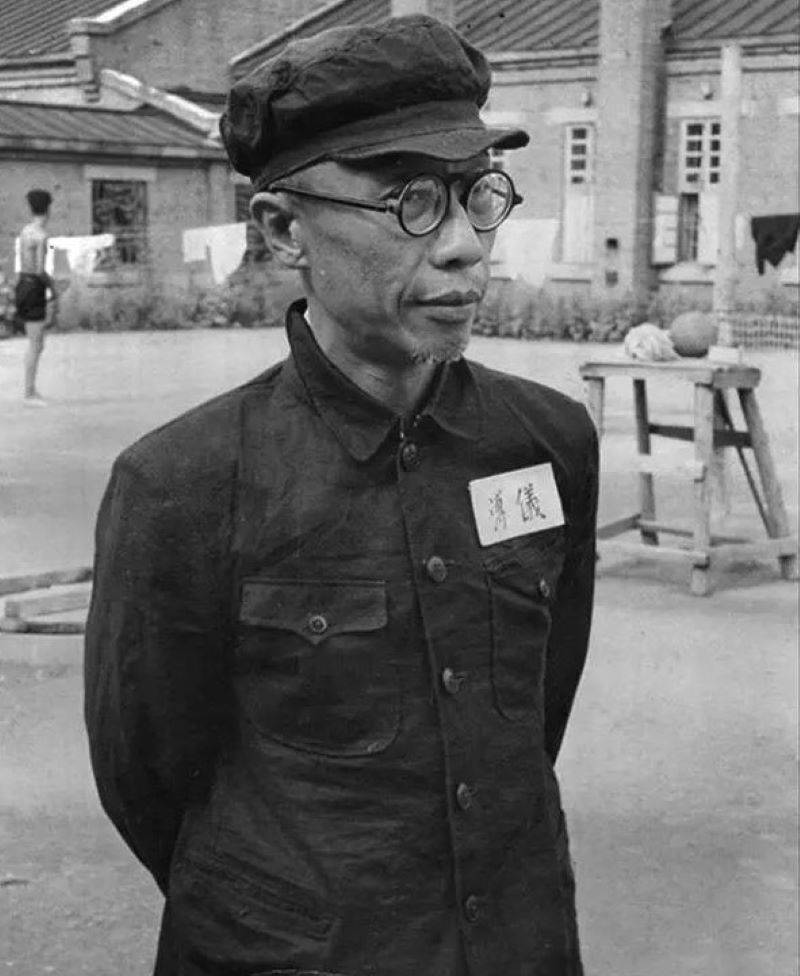 This is not Nuremberg for you

“If something happens to me, the Japanese will not accept responsibility,”
- said Pu Yi before leaving for the Tokyo trial. The trial in Tokyo, as you know, ended in December 1948 and was no less important in comparison with the Nuremberg trial, which seemed to put an end to World War II.

However, in Nuremberg, as you know, only the leaders of the Third Reich were condemned, while the Japanese militarists still expected to evade responsibility. Decisive accusations against them were presented by the last Chinese, and to be absolutely precise, the Manchu Emperor Pu Yi.

Relatives called Aisingero Pu Yi simply Henry. After being arrested by Soviet paratroopers, he stayed in Mukden, after visiting the famous parade in Harbin, under the supervision of Captain Pyotr Yazev, already familiar to readers. Yazev, in the same place, in Mukden, introduced Pu Yi to two colleagues and friends, Mikhail Pismanik and Pyotr Podnozov.

They were the same captains - security officers of the new formation. Both graduated from the best higher, and not military, educational institutions. Mikhail Pismanik is a philologist at Moscow State University in Moscow, and Pyotr Podnozov is a law faculty at the University of Leningrad State University in St. Petersburg. On the oral recommendation of Lavrenty Beria, they attended the last White Guard parade in Harbin, and together with Pu Yi.

After this solemn spectacle, Henry Pu Yi arrived in Khabarovsk with them. He was placed at the NKVD special dacha in a picturesque place outside the city. There, in a two-story mansion in the past, a breeder well-known in the Far East, who fled to China after the revolution, on direct instructions from the center, three enlightened friends were preparing the captive monarch to speak as a witness at the upcoming Tokyo trial.

I will speak Russian

At the request of the emperor, three colleagues - friends invited a teacher of the Russian language with knowledge of Chinese to the dacha. Under his guidance, Henry began to study Russian from the basics of school and, due to his talent, progressed quite successfully in this regard.

Chekists prepared Pu Yi, I must say, very thoroughly. At first interrogated to the smallest detail, they daily rehearsed with him the answers to the alleged most acute and slippery questions of the defense in the upcoming international trial. Even then, in advance, the attention of the mass media of the whole world was riveted to him. 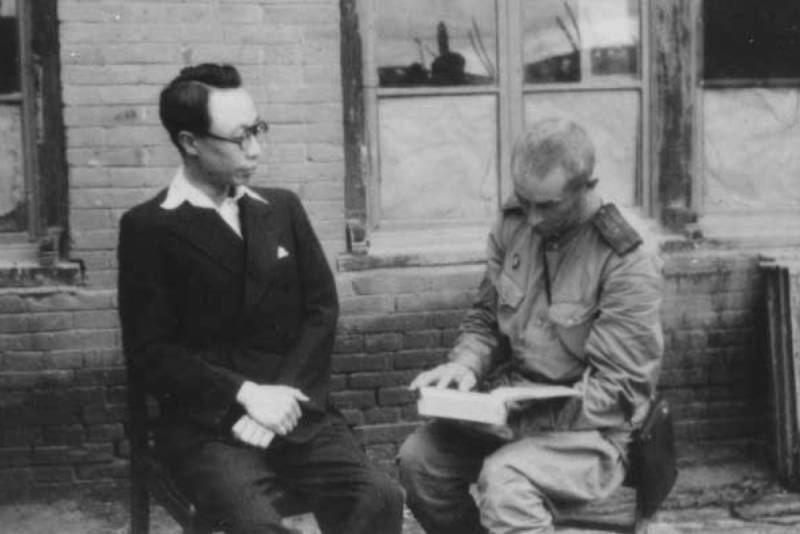 Pu Yi and translator Kostryukov
It is clear that the preparation of the ex-emperor was not limited to the basics of the Russian language and memorizing the correct answers. The then People's Commissar of Internal Affairs of the USSR, Commissar of State Security of the 2nd rank, Colonel General Sergei Kruglov, on the eve of Henry Pu Yi's departure, accompanied by Captain Yazev, met with him at a secret dacha and reported to Stalin:

“Pu Yi was well prepared for the Tokyo trial in every way. Although, of course, there is no guarantee that he will withstand all attacks on the process ... "
On August 9, 1946, Henry Pu Yi was taken to Tokyo. On this day, all Japanese newspapers came out with his photographs. He looked very presentable - thin, in a good suit, white shirt and tie, thin glasses.

The appearance of Pu Yi - the former emperor of the puppet state of Manchukuo, formed by the Japanese military administration on the territory of occupied Manchuria before the International Tribunal - as a witness was a strong move by the Soviet delegation. Moreover, at the Tokyo Trial this turned out to be a complete surprise for almost all of its participants.

It became a sensation, even caused a shock, as the newspapers wrote. Approximately the same impression, according to journalists, was made at the Nuremberg trials by the appearance of Field Marshal Paulus, who was taken prisoner in Stalingrad, as a witness.

Newspapers emphasized the importance of the testimony of the last Chinese emperor, speculating how he would behave. The excitement around Pu Yi was such that the chief prosecutor, an experienced American lawyer J. Keenan, decided to personally interrogate him. However, Pu Yi answered all the most tricky questions of the defense at the Tribunal clearly, without hesitation, as detailed as possible. 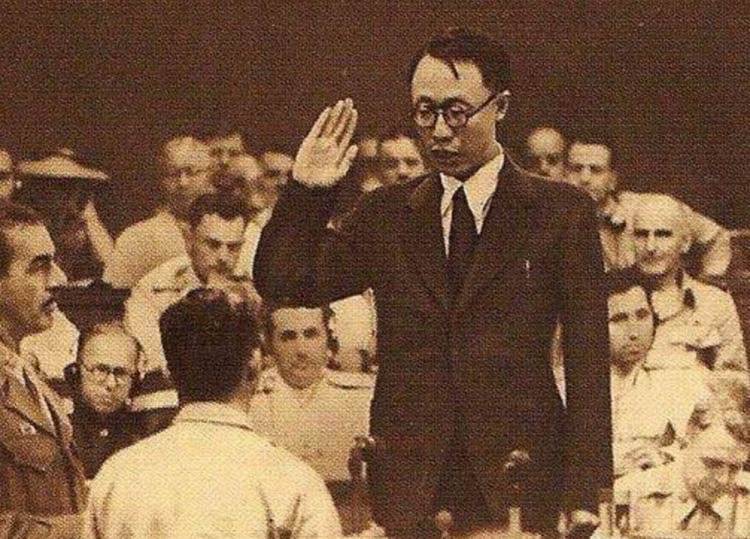 After a number of Japanese defendants defiantly refused to testify, Pu Yi's speeches gained special value. He did not let himself be knocked down and taken aside, standing to his death to his death. Obviously, the imperial past of Henry Pu Yi also affected this. The anti-Soviet orientation, the desire to discredit the position of the USSR, was already quite clearly felt in the behavior of the defenders.

Against the background of all others, the American lawyer Major Blakney acted most assertively in this regard. His last question, in an attempt to prove that Pu Yi was saying what he was ordered to say in the USSR, was this:

“Is any of what you have shown here the result of threats at your address or any promises to you? Tell me, what did the Russians promise you for your testimony in this court?”
However, Pu Yi held firm, again - he stood to death. And to this question, without hesitation, he answered:

“For your information, I will say that they did not threaten me with anything and did not promise me anything at all. I am telling the truth."

The Truth of Comrade Stalin

Indeed, what could three young Soviet Chekists promise him. And neither they nor their Far Eastern bosses, and even more so the Moscow leadership, had any need to put pressure on him at all.

Moreover, given the fact that the former emperor literally flooded Stalin with letters and papers (Write letters, Your Majesty! To Moscow, Comrade Stalin ). Pu Yi bombarded the Soviet leader with his statements, using the most unexpected arguments and reasons for this, asking him to stay in the USSR without fail. 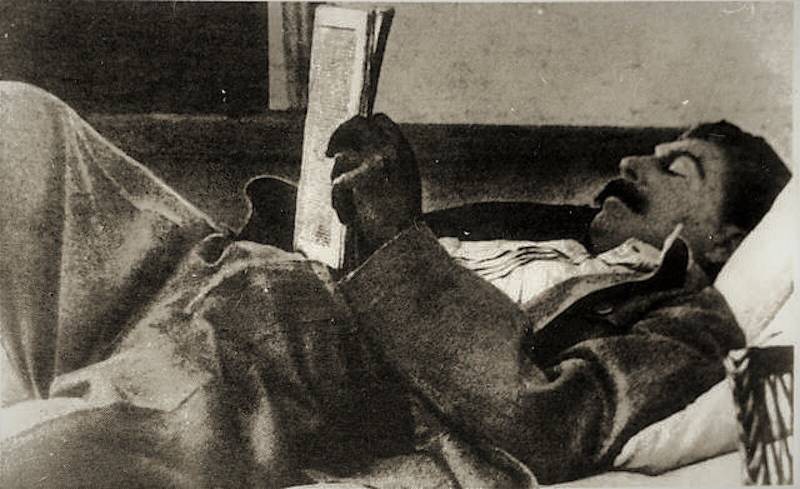 And here is what he wrote to Joseph Vissarionovich a little later - on April 21, 1946:

“It is impossible to convey either on paper or in words the gratitude that I feel for the Government of the Soviet Union and the Red Army. For this reason, I decided at all costs to settle within the boundaries of the Soviet state. I will work tirelessly ... to thank the USSR for such a good deed as saving my life.
Pu Yi did not lie, because he knew for sure that the Japanese planned that the emperor, who had signed the act of renunciation the day before, would be urgently sent from Mukden to Tokyo. Thus, it was the Soviet troops and Captain Pyotr Yazev, who accidentally met Pu Yi at the airfield near the runway where he was waiting for the plane to Japan, saved his life.

“The purpose of my dispatch,” he told the participants in the process, “was to keep me and my family silent by killing all of us ... I was immediately told that if something happened to me in Japan, the Japanese government would not recognize himself responsible..."