"Hetman Mazepa" and other corvettes: unfinished ships with a predictable future 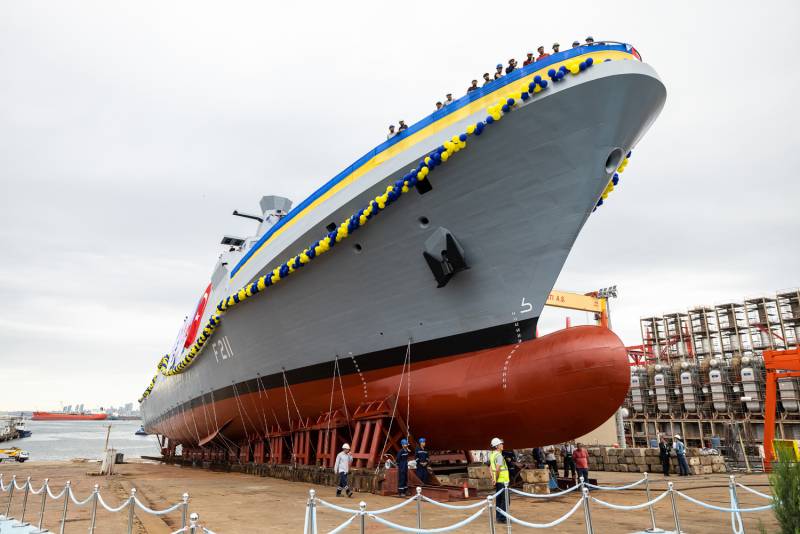 "Hetman Mazepa" during launching, October 2, 2022. Photo by the OP of Ukraine

In accordance with the 2020 contract, Turkey is building a series of Ada / MILGEM type corvettes for the Ukrainian Navy. The lead ship of this series was recently launched and work began on the next hull. In total, it is planned to build four or five corvettes in the medium term. However, in the current situation, the prospects for such a shipbuilding program are in doubt.

On December 14, 2020, the Ministry of Defense of Ukraine and the Department of Defense Industry of Turkey signed a contract for the construction of two new corvettes for the Ukrainian fleet. According to the terms of the document, the shipbuilding company Savunma Teknolojileri Mühendislik ve Ticaret A.Ş became the main contractor. (STM). The actual construction of the ships was entrusted to the RMK Marine shipyard near Istanbul.

A few days later additional agreements appeared. According to their terms, the Okean plant (Nikolaev) was supposed to accept completed ships from Turkey and equip them with the necessary instruments and weapons. In addition, the Turkish side was supposed to transfer the necessary technologies for the construction of two or three more corvettes on the Ocean.

The cost of the lead ship, planned to be built in Turkey, was initially estimated at 8 billion hryvnia (approx. 265 million US dollars). The entire series of four ships, according to Turkish data, would cost the customer more than $ 1 billion in 2020 prices.

According to some estimates, such an estimate took into account only the construction of ships and the installation of basic systems, but did not include weapons and other equipment. Several tens or hundreds of millions of dollars more would have to be spent on such complexes and systems, which would have led to a significant increase in the total cost of the program.

The RMK Marine plant began preparations for the construction of the lead corvette last spring. The official laying ceremony took place on September 7 with the participation of officials from the two countries. After that, about a year was spent on the formation of hull structures, installation of the equipment provided, etc. 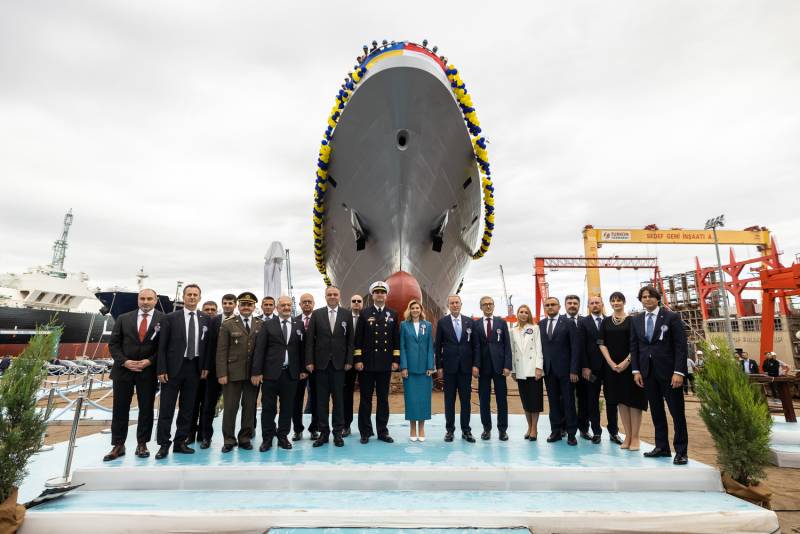 The ship and guests of the ceremony. Photo OP of Ukraine
On August 18, 2022, the ship was given the name "Hetman Ivan Mazepa" and the number F211. Just the other day, on October 2, a descent ceremony took place in Turkey. In a solemn atmosphere, the decorated unfinished ship was led along the slipway and launched into the water. According to tradition, a bottle of champagne was smashed against the side - but this was not done on the first attempt.

According to the construction plan, in the coming months, the Turkish shipyard will complete the installation of the necessary structures, systems and units. After that, the ship will be handed over to the Ukrainian side and taken to Nikolaev. They are going to install weapons received from foreign suppliers and prepare the ship for testing.

This work takes almost a year. According to the work schedule, the Mazepa should enter the factory sea trials at the end of 2023. They want to conduct them in 2024, and immediately after that the ship is going to be accepted into the Navy.

Also on October 2, the ceremony of the first metal cutting for the second ship of the series took place at the RMK Marine plant. The date of the official bookmark has not yet been announced. Terms of construction, launching, etc. also remain unknown. Probably, in the current situation, the participants in the shipbuilding program simply cannot make plans.

The same applies to the construction of the next two corvettes, which were planned to be laid on the Ocean in the foreseeable future. The Ukrainian shipbuilding industry has lost its potential in recent decades and could not fulfill large and complex orders. After the demilitarizing strikes of the Russian army, these opportunities were also lost.

The Ada corvette project (“Island”; all Turkish ships of this type are named the Princes' Islands of the Marmara Sea) was developed in the first half of the XNUMXs as part of the larger MILGEM “national ship” program. Such corvettes are designed to operate in the coastal zone and respond to various threats. It provides for the possibility of combating air, surface and underwater targets. 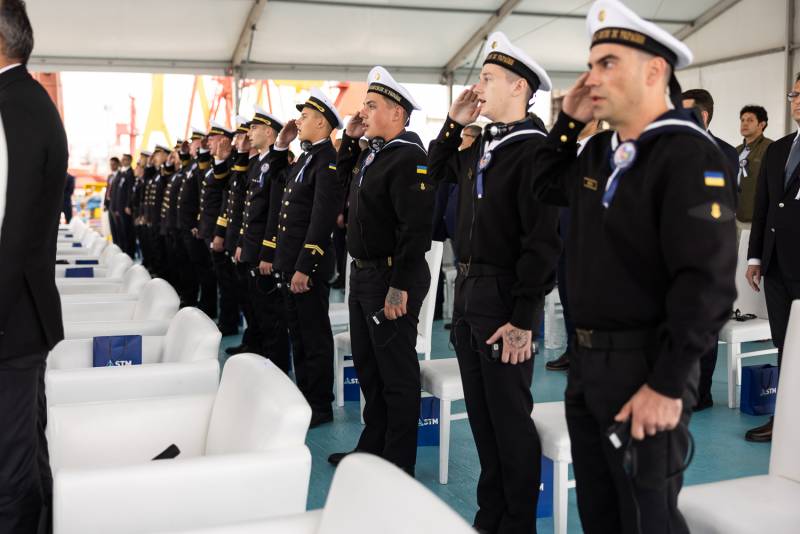 The crew has already been formed for the ship. Photo OP of Ukraine
Ada is a ship with a hull of traditional contours and an "inconspicuous" superstructure, consisting of large planes. The length of such a ship reaches 99,5 m with a width of 14,4 m and a normal draft of 3,9 m. The normal displacement is 2400 tons.

The ship is equipped with a CODAG type power plant from RENK. It consists of two diesel engines with a capacity of 5790 hp each. and one gas turbine engine for 31 thousand hp. Each diesel engine is connected to its own gearbox and rotates one of the two propeller shafts. The power of the gas turbine engine is distributed to both gearboxes in a separate box, and all engines can work simultaneously. With the help of such a power plant, a maximum speed of 30 knots is achieved. The economic one is half that and gives a cruising range of 3500 miles.

Like other MILGEM ships, Ostrov is equipped with a unified Turkish-developed G-MSYS combat information and control system. Associated with it are the SMART-S surveillance radar, radars and fire control devices of various types, the TBT-01 sonar complex, communications equipment, electronic warfare, etc. CICS and other devices allow the ship to operate and solve problems independently or as part of a detachment with the distribution of functions.

On the bow of the ship is a 76-mm gun mount Leonardo Super Rapid. There are also two STAMP combat modules with 12,7 mm machine guns. Earlier plans were reported to install 35-mm systems, but they, apparently, were abandoned. Barrel weapons are controlled remotely using optical and radar means.

The installation of various missile weapons is envisaged. Two launchers with eight Harpoon anti-ship missiles will be placed in the center of the superstructure. For self-defense, Ukrainian corvettes should receive European-designed MICA-M short-range air defense systems.

Anti-submarine weapons are represented by two 324-mm torpedo tubes. Declared compatibility with existing and prospective Turkish and foreign ammunition of the appropriate caliber. 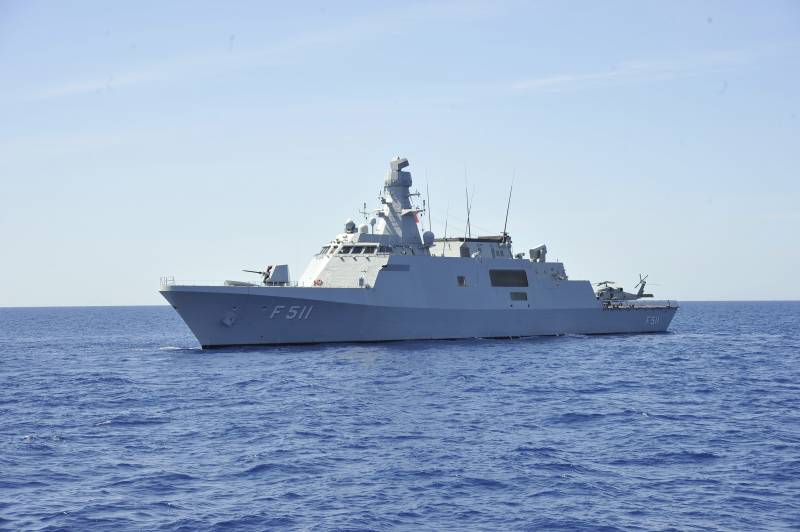 Lead corvette Ada - Heybeliada (F-511). Photo by the Turkish Ministry of Defense
A hangar for a helicopter is placed in the aft part of the superstructure. Turkish corvettes carry one S-70B Seahawk each, as well as a supply of fuel and the necessary equipment. Unmanned aerial vehicles may be used aviation complexes. In the internal compartments of the superstructure, two rigid-hull inflatable boats are transported.

The crew of the corvette Ada consists of 93 people. If necessary, the ship can take on board another 10-13 people. and provide them with comfortable accommodation. Stocks on board are limited. Autonomy is only 10 days. In the presence of support vessels, longer trips are possible.

In general, the Ada corvette is a modern ship of its class with fairly wide combat capabilities and good performance characteristics. Depending on the tasks and situation, such ships can work effectively independently or as part of a detachment - other ships will make it possible to compensate for the limitations and shortcomings of the corvette.

"Island" is able to monitor the situation in the air, on water and under water and detect various objects. It can protect itself and other ships from air raids within a radius of 20 km. With the help of Harpoon missiles, surface or coastal targets are hit at ranges of at least 120 km. It also has anti-submarine weapons.

A ship of this appearance is of interest to some customers. So, in 2011-19. four corvettes became part of the Turkish Navy. Since 2020, four more ships have been under construction for Pakistan. The first two pennants will be built by the Turkish industry, and the other two will come from the Pakistani stocks. Ukraine became the next customer for Ada corvettes.

The Kyiv regime wanted four or five Turkish corvettes. The first of them has already been launched, and the second is at the stage of assembling the first structures. However, the prospects for such construction are at least questionable. It is unlikely that it will be completed on time and with planned results. 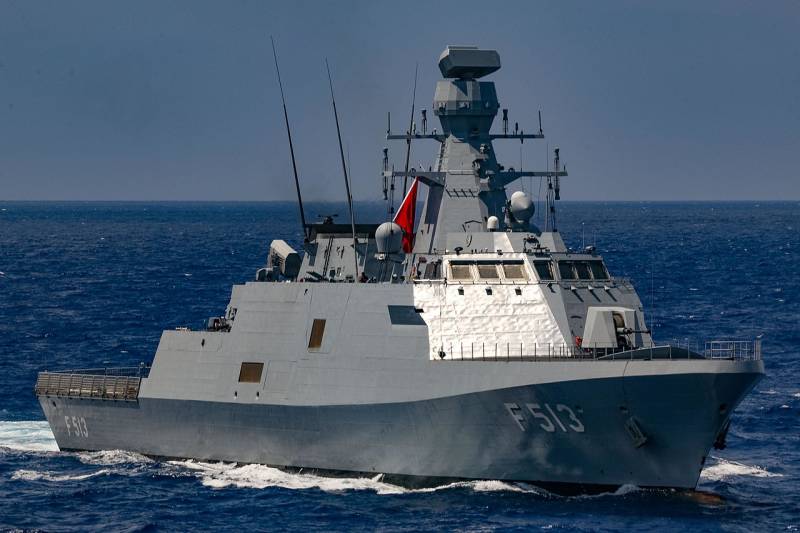 The third ship of the series, Burgazada (F-513), in a joint NATO exercise. Photo by the US Department of Defense
Reasons for doubt appeared already at the stage of signing the construction contract. So, it was not clear whether Ukraine would be able to pay for a not the cheapest project. In addition, her ability to complete her part of the program to complete and equip ships raised questions. Now both questions are clear. The Kyiv regime will not be able to pay for the construction from its own funds without resorting to outside help. The completion of ships in Nikolaev is generally excluded.

It cannot be ruled out that Ukraine, Turkey and, possibly, foreign partners will be able to find a way out of the current situation and organize the completion of the lead and subsequent ships. In particular, all operations for the installation of weapons can be performed in Turkey. Crew training is also possible there.

However, even such a “positive” scenario requires a lot of time, which Kyiv no longer has. In addition, the completed ship will face a known risk. After the official transfer to the customer, the Hetman Mazepa corvette or other hulls become a potential target for the next Russian demilitarizing strikes. Ships can be destroyed at any time after entering neutral waters.

The adoption of corvettes into the Ukrainian Navy and their full-fledged operation, as well as combat use, simply do not seem possible. They can be hidden in foreign ports, but in this case the entire construction program and all costs lose any meaning.

Thus, in the recent past, Ukraine has found an opportunity to order the construction of several modern foreign-designed ships. The construction process is still proceeding according to the schedule, but now there are no reasons for optimism. Ukraine is undergoing demilitarization, and Turkish-built corvettes have every chance of falling under these processes.

In a different situation, "Mazepa" and other ships of the series would have a chance to enter the service and influence the state of the Ukrainian Navy. But that time has passed, and now the future of such corvettes is quite predictable. As well as the prospects for the Ukrainian fleet as a whole.