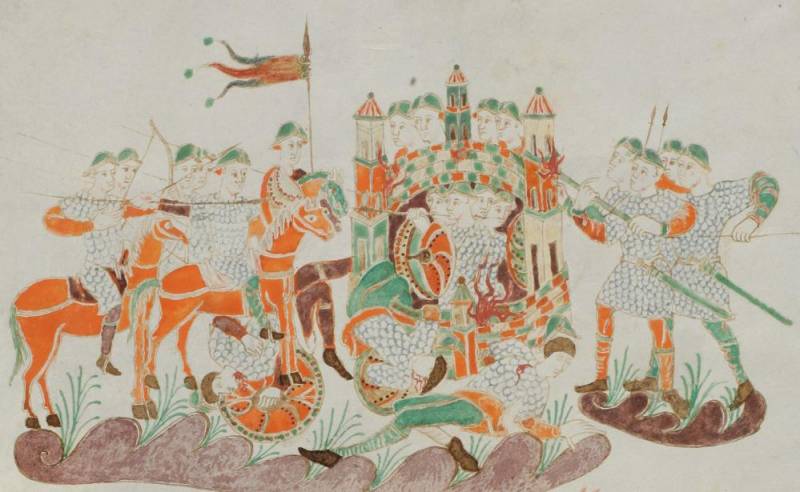 It happened on a July day
When the bread began to turn yellow.
Between Earli and Ergyle began
Not for life, but for death struggle.
The Duke of Montrose wrote a letter:
"Terrible Ergail, and don't wait an hour,
Speak in the morning and your people
Airlie Castle, plunder lead!”
Robert Burns "The Fair Castle of Airlie"
Ancient castles and fortresses. We again continue our story about medieval castles, however, before dealing with them history or architecture, it makes sense to get acquainted with castles from medieval miniatures and see how they were depicted by contemporary artists. And then we got acquainted with the images of knights in miniatures in medieval manuscripts, noted a number of interesting artistic features, but, in fact, we have not yet seen “pictures” with medieval castles. Meanwhile, miniatures "with castles and fortresses" are also very interesting for everyone who is attracted by the history of the Middle Ages.

Let's start with the fact that images of "strong places" are found in manuscripts already in the XNUMXth-XNUMXth centuries. In particular, the storming of the fortress can be seen in the "Golden Psalter" of the St. Galensky monastery.

Here we have a real fortress with very beautiful towers. But… which fortress had such towers at that time? Perhaps they have not survived from those years, but what we have today clearly says that this is the artist's fantasy. But the armor and robes of the warriors are depicted quite conscientiously.

A completely typical motte castle is depicted on an embroidery from Bayeux, but since there was already material about this here, we will not repeat ourselves, we only note that this is already 1066.

Before us is a miniature from the "Great Chronicles of France", dating from 1274. Here we see a typical castle with a donjon, and the donjon has four towers at the corners. Narrow vertical loopholes are also typical of this time. Something else is surprising, namely: a mace in the hand of a warrior on the right. One might really think that he took it from our epic Ilya Muromets, or, on the contrary, it was Ilya who took such a mace from him and only added spikes to it for greater lethality.

It is interesting that the finds of such weapons no, but in miniatures and in the paintings of great artists, they are found. By the way, at Gaidar's "School" a "bad cadet", killed by Golikov, cut himself exactly the same ... 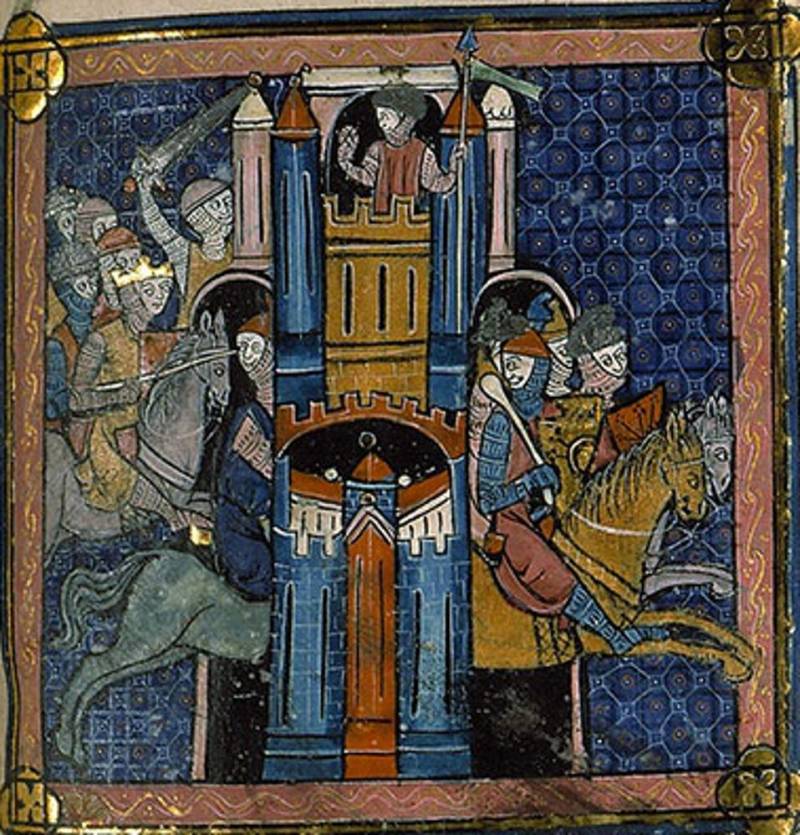 Miniature with a lock from the manuscript of 1274 "Great Chronicles of France". Library of St. Genevieve, Paris
In this miniature, the crusader host fights the Muslims against the backdrop of the walls and towers of Antioch. Moreover, it is clearly seen that the architecture of its buildings is clearly not oriental. 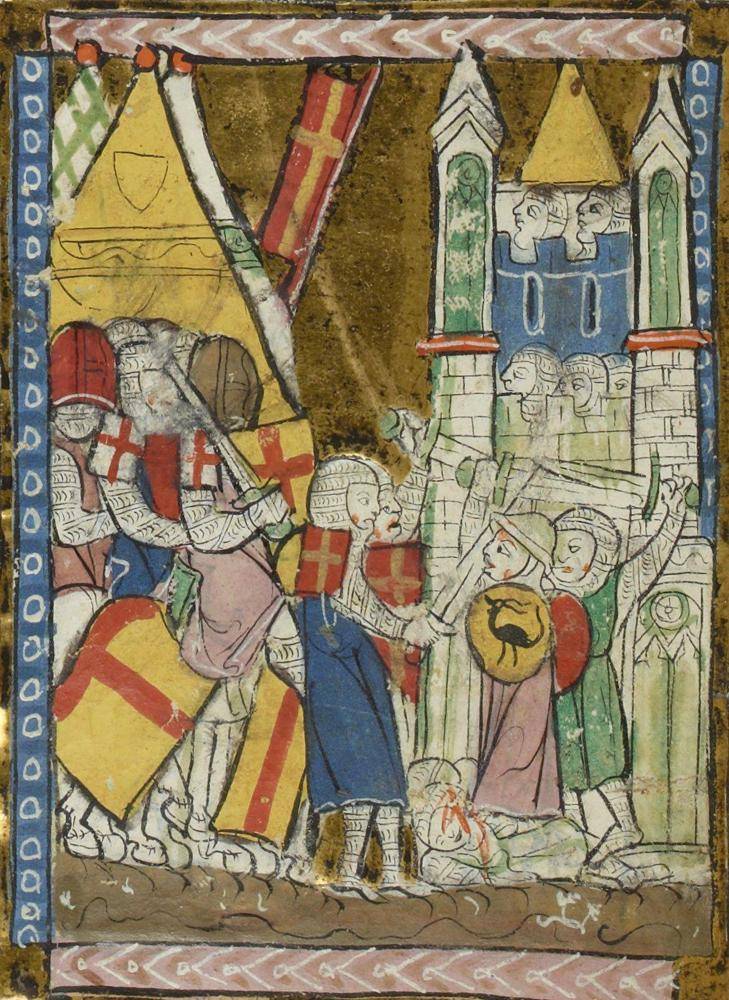 Let us turn once again to the miniature from the same manuscript. Before us is a drawing inscribed in a capital letter, that is, an initial, which was a characteristic way of decorating illuminated manuscripts of that time. Miniature from the Song of Antioch, 1275-1300. National Library of France
By the way, there are a lot of scenes in the manuscripts with sieges and assaults on castles and fortresses, while there are, of course, purely peaceful scenes, but they are much smaller.

It is interesting how the medieval artist presented to his contemporaries how the “expeditions” to the East took place - that was how the crusades were called at that time. This miniature shows how, with the help of stone-throwers, the enemy's fortress is thrown with stones, while chess is peacefully played in the camp of the holy host. 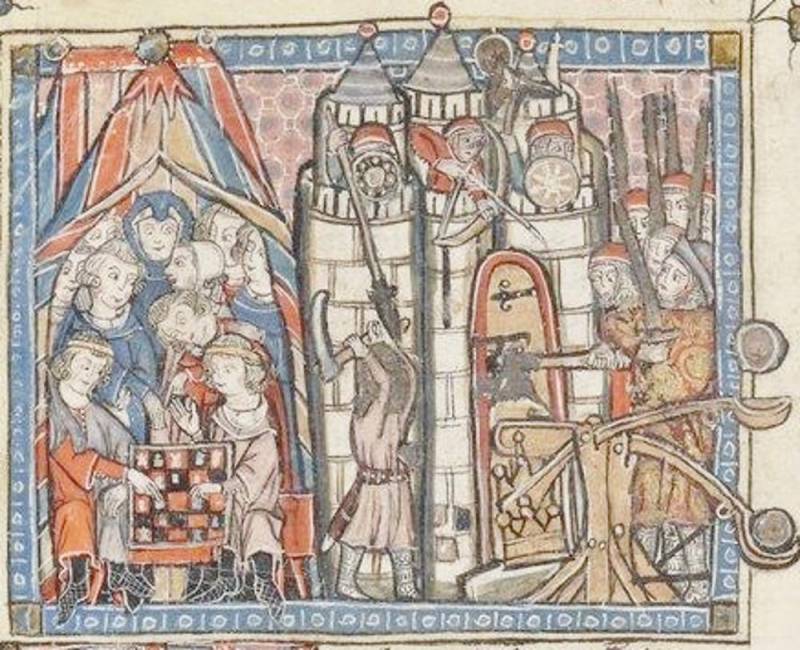 "History of the Crusades", 1300-1325 National Library of France, Paris
In the Chronicles of France (and there are many of them in different editions over different years), we, in addition to depicting the castles themselves, can see and therefore learn about the use of artillery against them. That is, according to this miniature in 1375-1400, it was already used ... 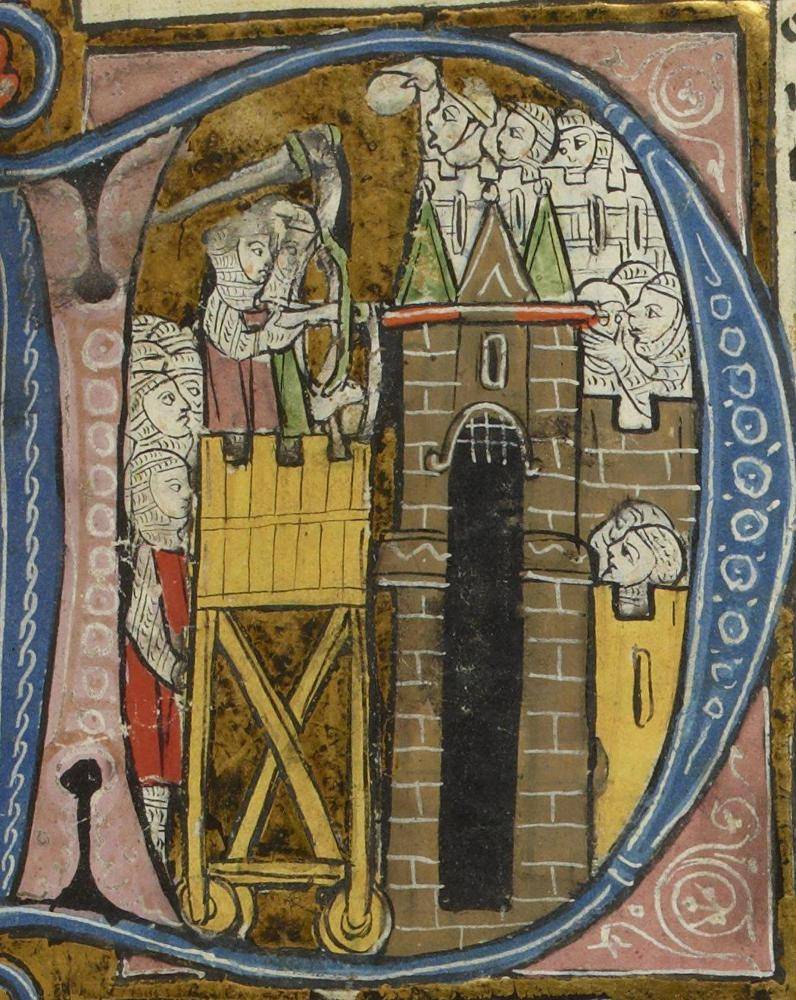 Let us turn again to the miniature from the Song of Antioch. Before us is a drawing inscribed in a capital letter, that is, an initial, which was a characteristic way of decorating illuminated manuscripts of that time. Here is shown a scene of an assault on an enemy fortress from a mobile wooden tower on wheels, a very interesting design. Miniature from the Song of Antioch, 1275-1300. National Library of France
One of the first guns. 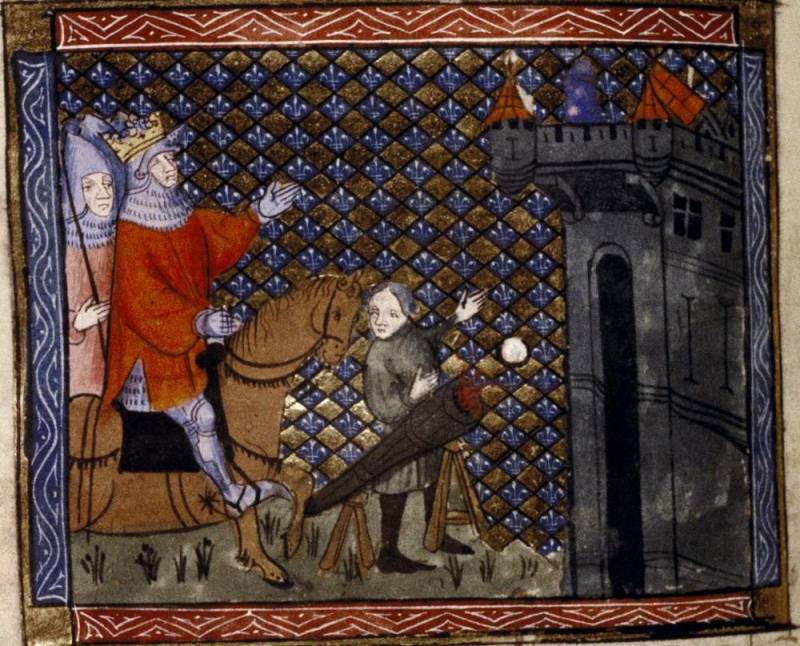 "Great Chronicles of France", 1375-1400. Bodleian Library, Oxford University
Moreover, the manuscripts of the same time inform us that stone throwers with a counterweight - trebuchet, still continued to be used! 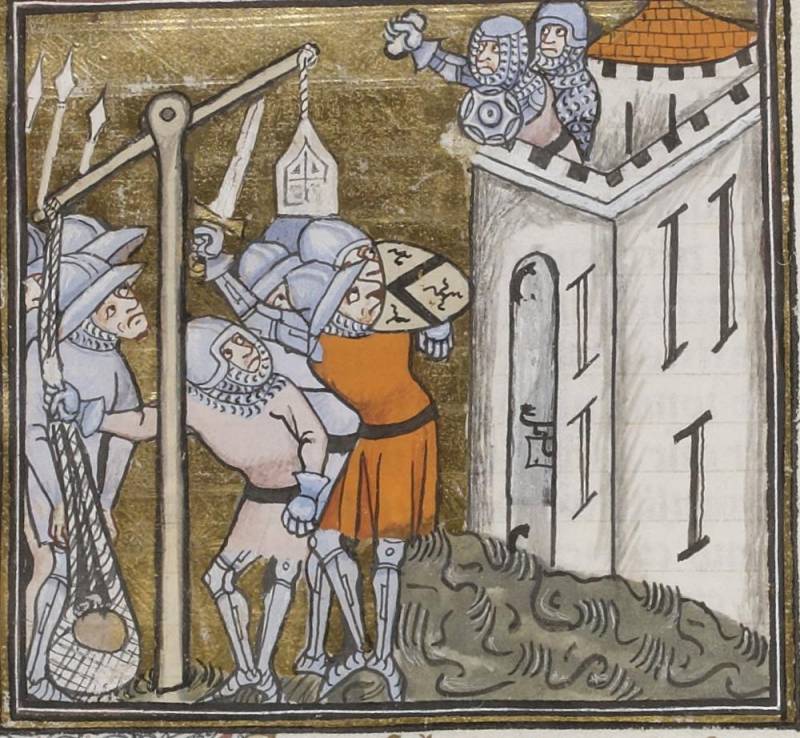 "The Mirror of History" (Volume 1), 1370–1380 National Library of France, Paris
Some thumbnails are extremely informative. For example, let's take this one, again, from the Great Chronicles of France, 1390-1405. Here we see the features of the castle/fortress architecture of those years; the way the knights and the banner of the King of England looked at that time, as well as the samples of polearms used, the characteristic shape of swords according to the typology of Ewart Oakeshott and ... the rondel dagger on two straps! 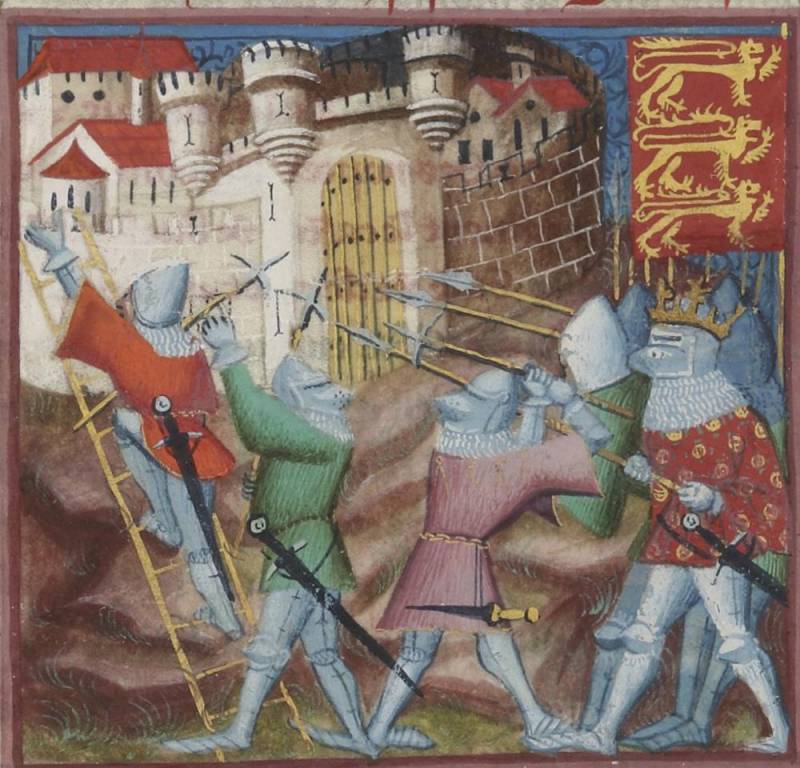 Miniature from the manuscript "Great Chronicles of France", 1390-1405. National Library of France, Paris
In some cases, the castles depicted in the miniatures were quite recognizable for a contemporary, not to mention the fact that the illustrations were supplemented with text. 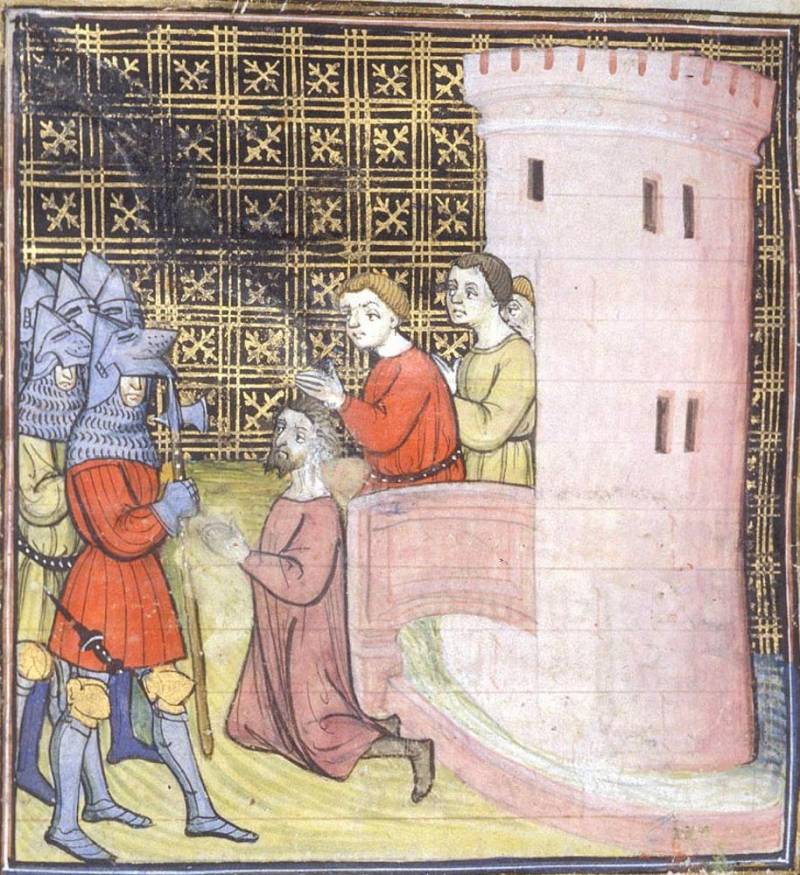 Illustration from the Chronicle of France, Saint-Denis, 1380-1400. British Library, London 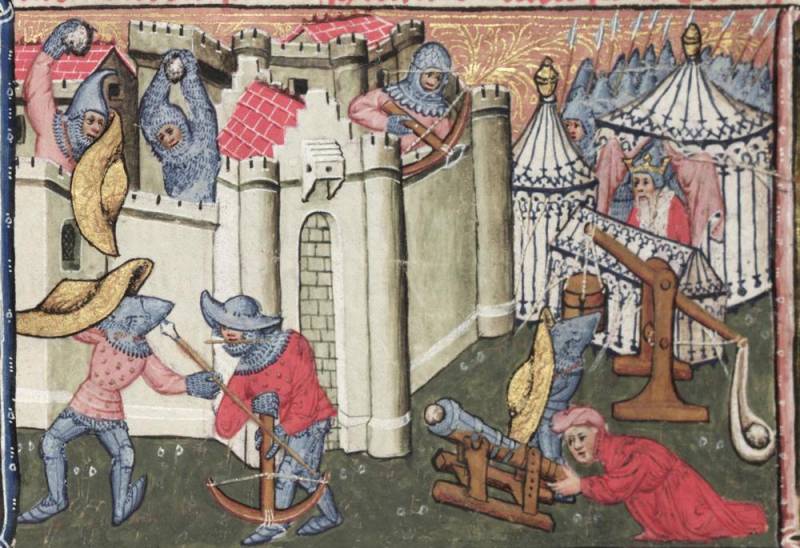 Alexander and Dindymus Manuscript, 1400 Bodleian Library, Oxford University
Year 1400. We look at one of the miniatures and see what types of weapons are used against the besieged. These are crossbows, stone throwers and cannons! And the besieged treat their enemies with stones. 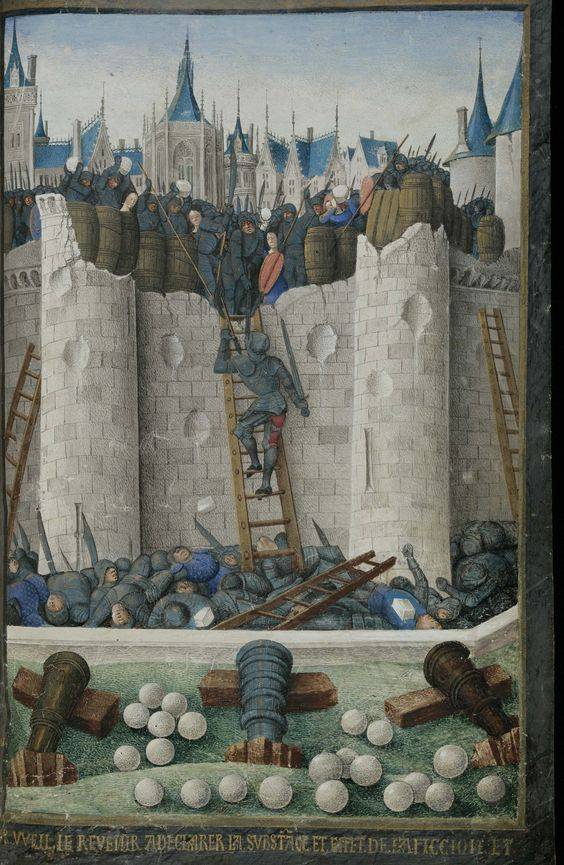 Look how well in this illustration the artist depicted the traces of cannonballs on the stone wall! René d'Anjou Mortification of Vanity, 1470 Martin Bodmer Foundation, Cologny, Canton of Geneva, Switzerland
Interestingly, although we see the same crossbow on miniatures depicting castle assaults dating back to the 1470th century, bows continue to be found on miniatures from manuscripts as early as the 1480th century. Here, for example, is an illustration depicting the assault on Ribodanus from the Collection of the Chronicles of England, XNUMX-XNUMX. 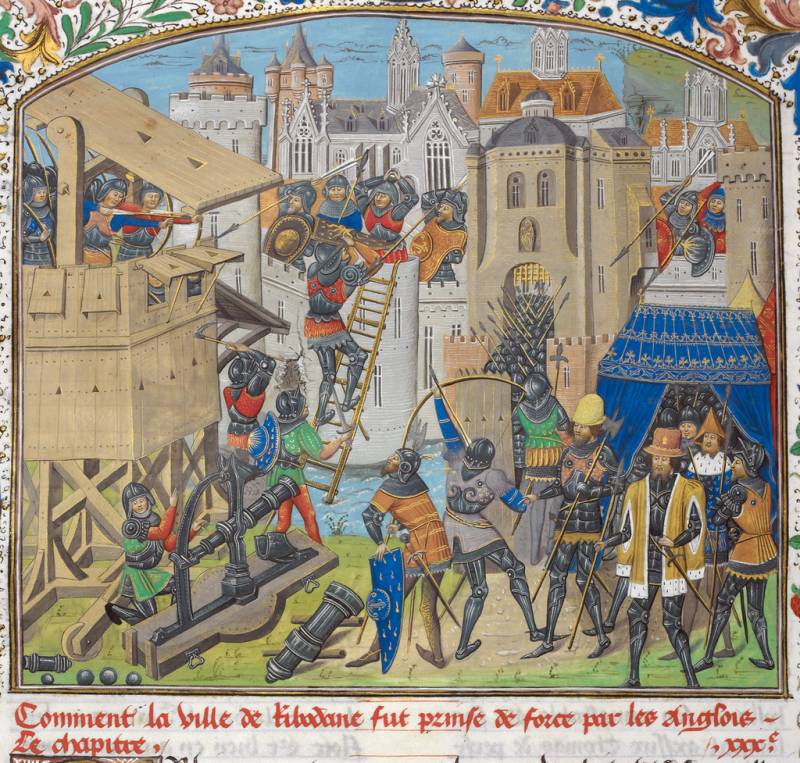 "Compilation of the Chronicles of England", 1470-1480. from the collection of the British Library
In some miniatures, architecture is very clearly visible, but at the same time, knights in armor are present on them. And since we know the time of writing this or that manuscript, the time of distribution of certain armor, this is an extremely accurate means of dating certain historical events. 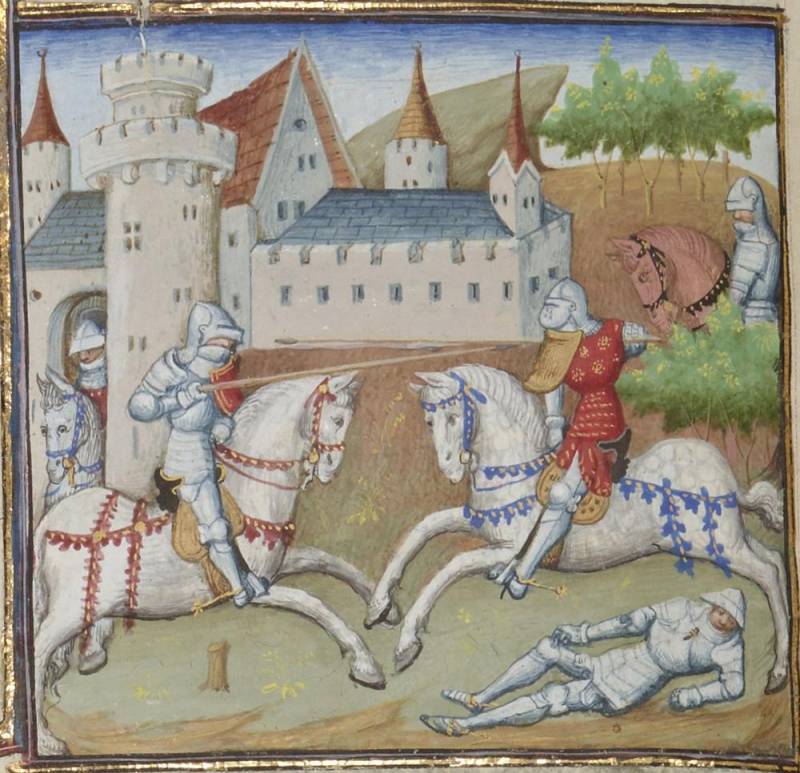 Here, for example, which tower and which knightly duel are depicted on the page of the novel "Guiron le Courtois", 1420. National Library of France, Paris
By the way, already at that time there was a “military book” so popular in our time (by the way, so many of these books were directly called!), In which all kinds of instructions were given regarding the conduct of the war and the assault, and the defense of fortresses and castles, in particular.

For example, it was proposed to water the attackers with water, including boiling water, through special weirs! 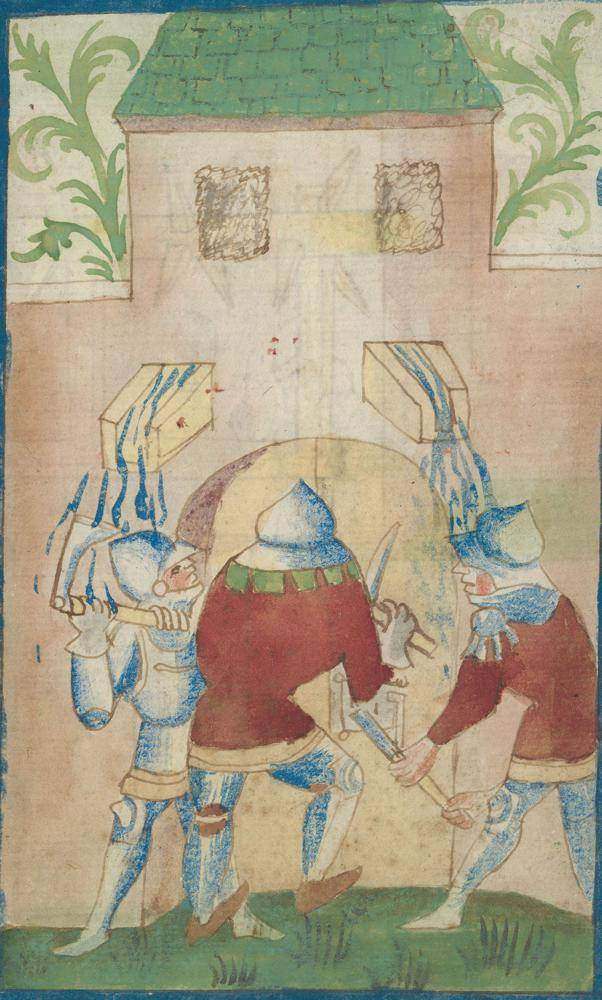 "Military equipment", 1420-1440 Upper Rhine, Germany. Zurich Central Library
Please note that in the illustration below, the defenders are dropping a red-hot iron cannonball on the warriors who approached the castle wall, covered with wickerwork! 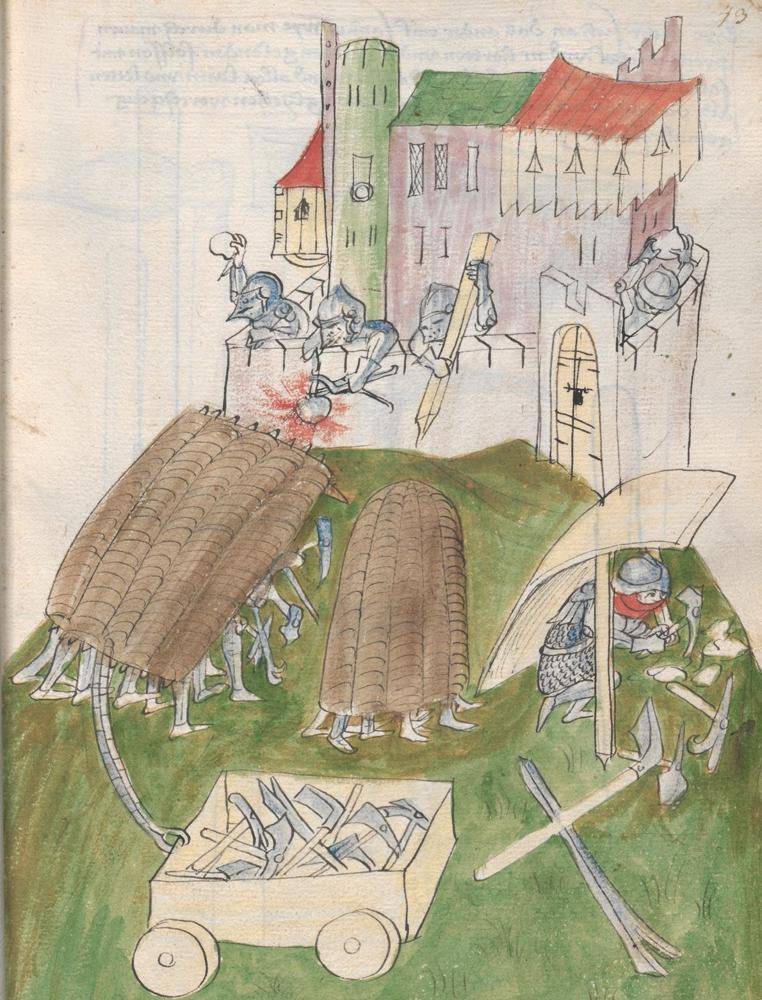 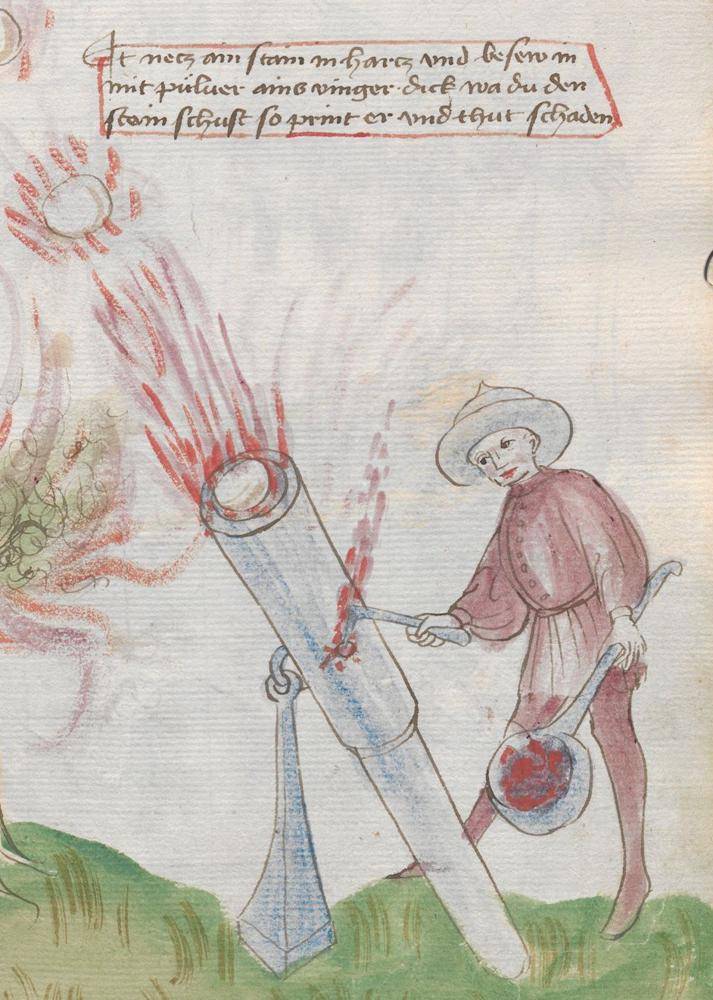 In this illustration, the shooter is holding a red-hot rod in one hand and a brazier with coals in the other. Why is a non-burning wick used? War Book, 1437 National Library of Austria, Vienna
And the thing is that the gunpowder of the XV century was a very fine powder, sticking together into clods. There was no air for combustion in it, so it was not possible to set fire to it in the barrels of guns, where it merged into one dense mass. I had to use a hot rod. From him, the saltpeter, which was part of the gunpowder, began to melt, released oxygen and the gunpowder flared up! Therefore, it was impossible to do without a brazier! 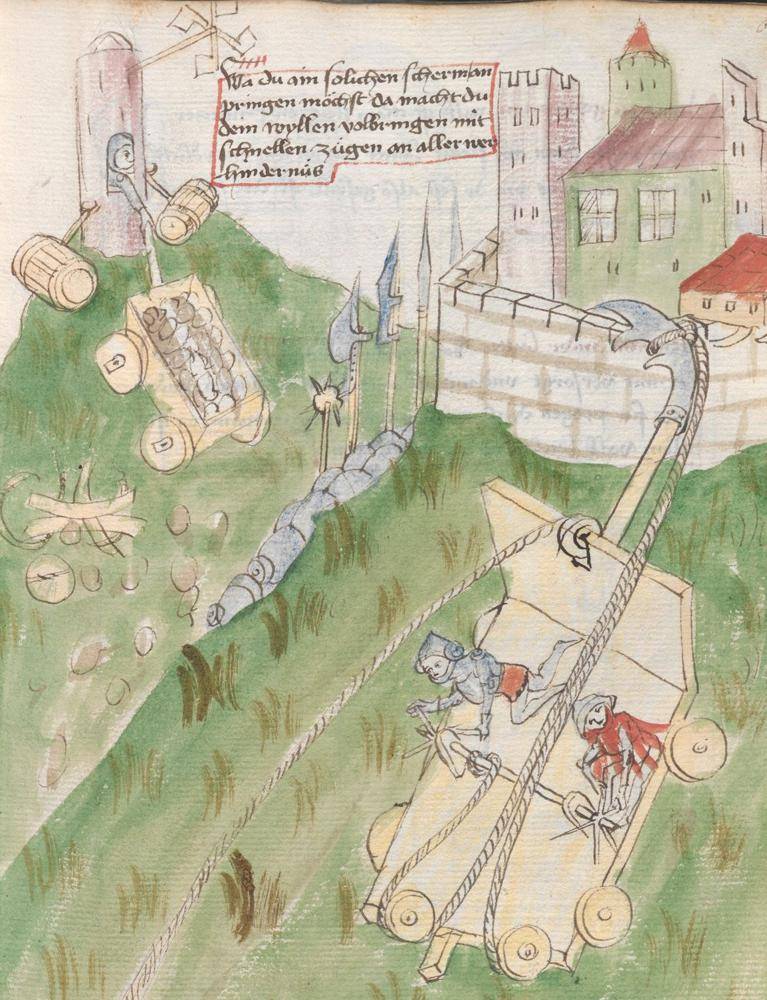 It is unlikely, of course, that at that time anyone was making such machines. But why not offer? War Book, 1437 National Library of Austria, Vienna
Well, in the future, books began to be printed, so this is a completely different story.

From what we saw, we can draw a very funny conclusion: the illuminators tried to very accurately convey the clothes of their time in their illustrations, but castles and fortresses, on the contrary, painted with relative accuracy and practically did not try to depict something specific. Why this is so - you can argue for a long time, but we will most likely never know the exact reason.

Although, yes, other examples are known when it is in the manuscripts that we find very accurate images of medieval buildings. Moreover, there is even such a manuscript in which their appearance is displayed photographically accurately. But we'll talk about that next time...