Lee rifles - in the service of the US Navy 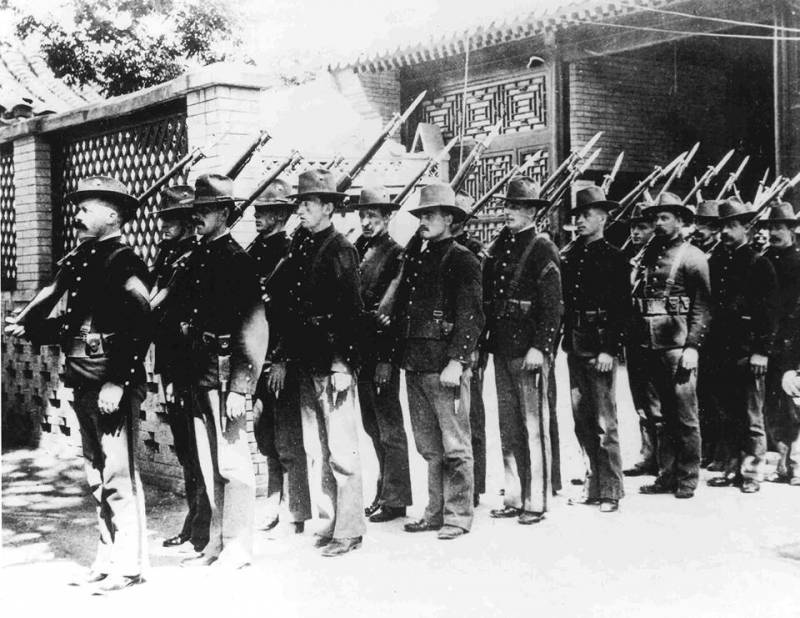 1895 US Marines with Paris Lee Rifles

With the guns of the new system you go, gentlemen,
I felt how they are loaded, they always hit.
Luck is for white rifles, they bring death
Pay and I'll show you what the Bear can do.
Rudyard Kipling, World War with a Bear, 1898
stories about weapons. It must have annoyed the army that the navy was now armed with bolt-action rifles while its soldiers were still running around with single-shot springfield bolt-action rifles. Therefore, in 1882, the army began new tests, opposing the Lee rifle to the Winchester-Hotchkiss and Chaffee-Reese rifles. All of them were five-shot caliber .45-70. 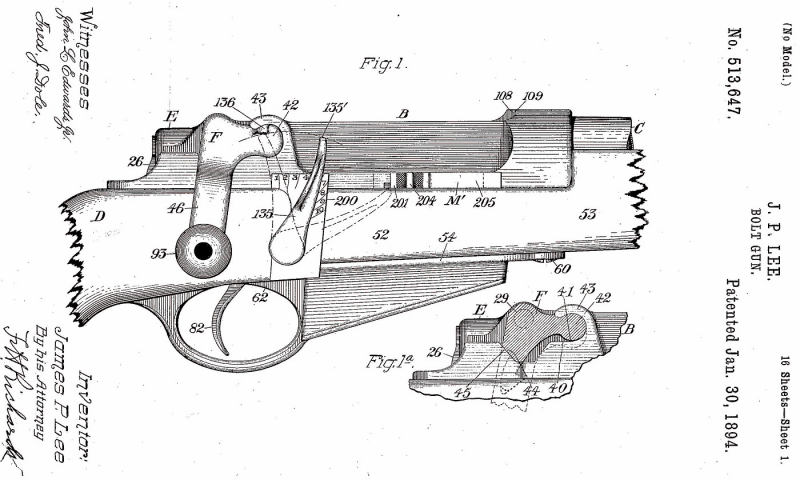 Schematic diagram of the breech mechanism on a Lee rifle from an 1894 US patent
Looking at the rifle that Lee submitted for testing, one can see that it had clear improvements over the first model of 1879. The rifle featured a comfortable bolt handle located behind the receiver, an improved locking system, and a redesigned magazine with longer cartridge jaws. 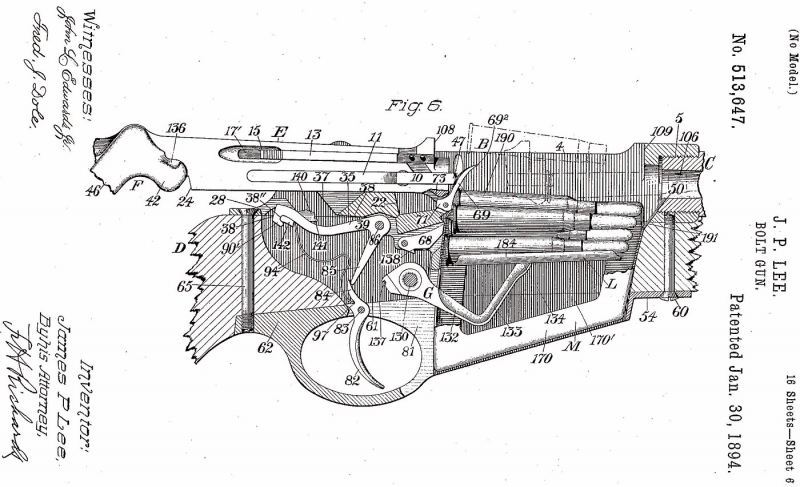 Interior view of the Lee rifle mechanism from an 1894 US patent
It was issued to more than 149 companies representing infantry, cavalry and artillery. "Lee" won the test unconditionally, but for inexplicable reasons, the head of the artillery department decided that "Spingfield" would remain.

And here is how this very mechanism turned out in metal. As you can see, there is a difference, and a considerable one. Noteworthy is the arrangement of the store. It is not removable, but permanent. It is loaded with a clip for 5 rounds, which is inserted into the magazine along with the cartridges and falls out of it after shooting the first two
Despite being defeated in military trials, the basic Lee military rifle, manufactured by Remington in .45-70 and .43 Spanish calibers of various models, was widely sold around the world. Based on it, the 1885 model was released, which was described in the previous material, but Lee did not calm down on this success. Moreover, in 1886 the first rifle chambered for cartridges equipped with smokeless powder had already appeared.

The same rifle in the cut. View from the left. Photo liveauctioneers.com
By 1894 he had developed a new rifle chambered for smokeless powder, and he was on time. In the same year, the US Navy announced a competition for a new "naval" rifle for fleet. The competition was more than democratic and solid in terms of the number of participants. Van Patten, Dodeto, Briggs-Nyland, Miles, a Russell-Livermore repeating rifle, five Remington models (all with side magazines) and a Lee rifle with a "direct motion bolt" were tested.

Rifle Lee 1895. Left side view. Photo liveauctioneers.com
At the same time, the Navy emphasized that sailors would like to have a rifle loaded with clips, but

"because conditions of service may require the use of loose cartridges or may result in the magazine being disabled, it is desirable that small arms can be loaded with single cartridges."
Lee's rifle had a magazine loaded with clips, and fully met the task. By the way, she also had a caliber approved by sailors - 6 mm. Therefore, it was she who was chosen as the winner in repeated tests and adopted by the US Navy in 1895 under the name "Lee rifle, model 1895, caliber 6 mm", also known as the M1895 Lee-Navy (that is, "Lee naval" ). 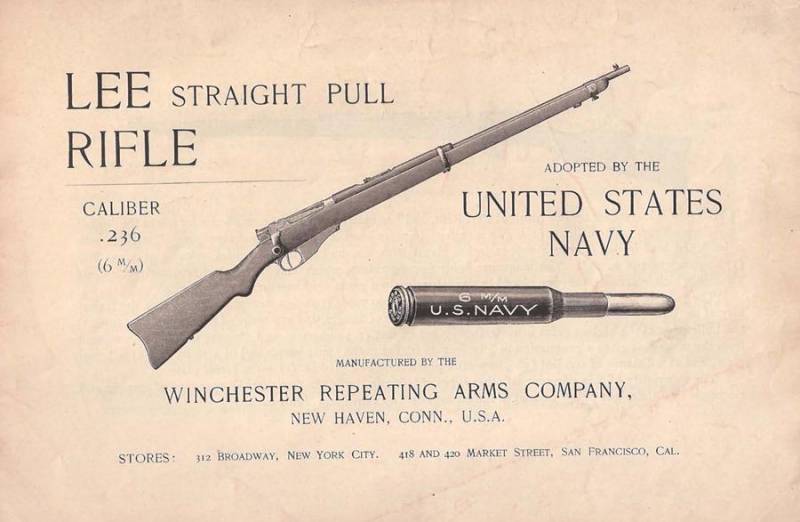 A page from the manual for Lee's rifle
But the old Remington-Lee rifles were not removed from service after that and were used until the end of the 1890s, and they were replaced with the 6-mm Winchester-Lee rifle of 1895, in general, slowly. At the same time, even the Colt-Browning machine gun was created for the new caliber, so that the interchangeability of ammunition among shooters and machine gunners in the American Navy was achieved one hundred percent!

Remington-Lee sporting rifle. Photo remingtonsociety.org
The Remington company, in turn, released a model of the Lee sporting rifle, also in 6 mm (.236 Navy), but also in other calibers, such as: 7 × 57, 7,65 Belgian, .30-30, and .30- 40. But between 1899 and 1905, only about 1500 copies of Lee's sporting rifle were sold, so it is unlikely that she made good money on it. Overall, though, the rifle was excellent. It is distinguished from combat rifles by a semi-pistol grip and a shortened forearm. Marine with a Lee-Navi rifle
As is usually the case, a lot of the high combat qualities of the new rifle was the result of a new cartridge adopted in 1894. It was the first U.S. military cartridge designated in metric caliber, the first cartridge to be equally suitable for both rifles and machine guns, and the smallest caliber cartridge ever adopted until the advent of the 5,56×45mm NATO cartridge. in 1964. At first, the bullet had a steel jacket with a copper-nickel coating and developed a speed of 780 m / s. But then the shell was made purely copper, which increased the life of the barrel to 10 shots, in contrast to 000 with a steel shell.

Cartridge 6 mm
Interestingly, the new cartridge had significantly greater penetrating power than the US Army .30 (.30-40 Krag) cartridge, and could penetrate 58 cm of softwood at a distance of 640 m, and 9,5 mm thick boiler steel sheet from a distance at 30 m. A 7 mm thick chrome steel sheet (without a substrate) made its way from 50 m.

Rifle mechanism close-up. View from the left. Photo liveauctioneers.com
Another important advantage of the new cartridge was the significantly reduced weight of the ammunition. So, 220 rounds weighed about the same as 160 rounds of .30. As a result, an 1898 US Marine carried 180 rounds of 6mm rounds packed in five-round clips and placed in black leather pouches. An army rifleman of the time who usually carried only 100 rounds of 30-caliber rounds in separate pockets of his bandolier. 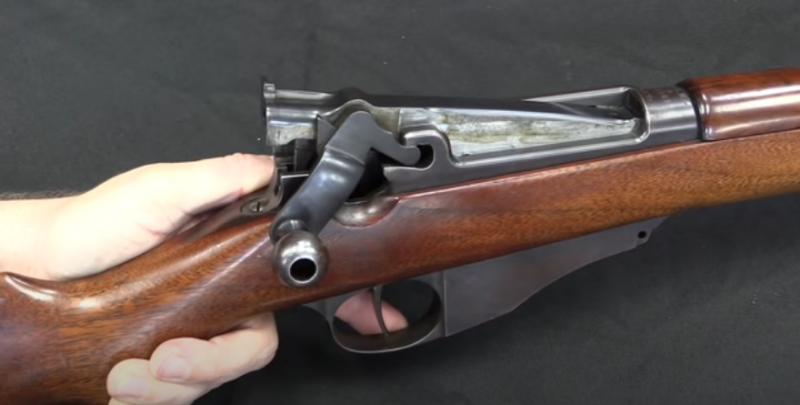 Bolt handle and one combat stop. Photo forgottenweapons.com
But the main "highlight" of the design of this rifle was its unusual shutter, which had the form of a rectangular bar, which did not need to be rotated when loading. That is, where, in order to control a cylindrical bolt, it was necessary to first turn the bolt and only then move it back and forth, while with Lee's rifle it did not rotate and only moved back and forth and that's it. In addition, she had only one combat stop, which was very unusual. The bolt control handle first had to be raised at an upward angle and then pulled back sharply in order to eject and extract the spent cartridge case. By pressing the bolt handle forward, the cartridge from the magazine was fed into the chamber, and the drummer was cocked, and the rifle was ready to shoot. The rifle had a fuse located at the top of the receiver on the left, which was raised with the thumb.

The rifle was controlled by three levers: the first on the left is the fuse, which was discussed above, the second is the bolt lock, which released the bolt and allowed it to be removed from the rifle, and the inclined lever, pressing which raised the bolt up. Photo forgottenweapons.com 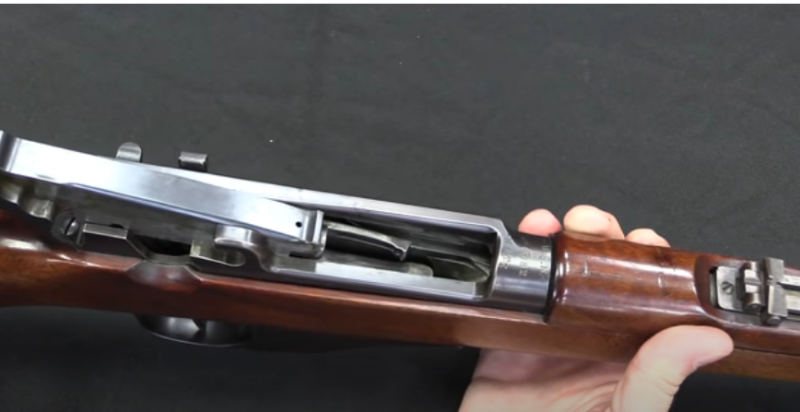 The extractor was very unusually arranged for this rifle. Firstly, it was very long and ... was not attached to the shutter. Secondly, it had its own spring, and it could easily be separated from the shutter when the latter was removed. He simultaneously moved along the groove in the bolt and in the bolt frame and pulled out the sleeve, holding it by the groove, but at the same time he pulled himself out of the bolt. And then the compressed spring pressed on the long plate of the extractor, and it also worked as an ejector! By the way, it happened that the extractor was forgotten to be inserted during cleaning and even lost! Photo forgottenweapons.com
The rather strange "up and back" movement of the bolt was unusual for shooters at first, and besides, the slightly inclined stroke of the bolt opening proved inconvenient for some men when the rifle was held at the shoulder. But despite this, the chief of artillery of the Navy, apparently not without reason, said that the action of Lee's rifle allows you to shoot "at a higher speed" than most rotary-action rifles adopted for service.

The sight allowed shooting at 2000 yards. Photo forgottenweapons.com
True, erosion of the Metford-rifled barrel was soon discovered, but nothing could be done about it, just like improving the quality of smokeless powder for 6-mm cartridges supplied to the USA from ... Great Britain! In total, about 15 of these rifles were made. 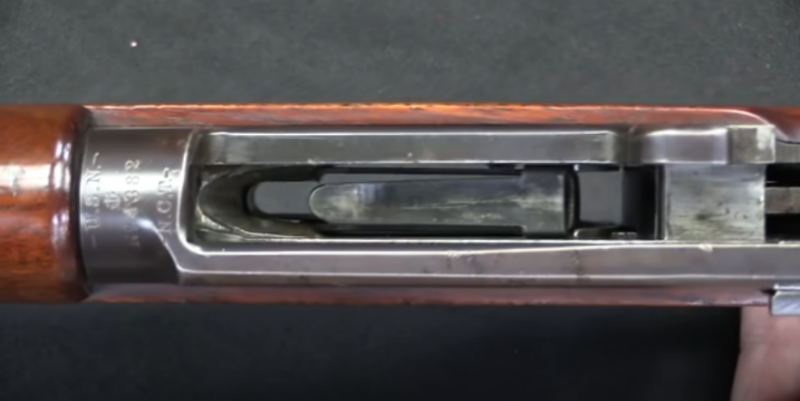 U.S. Navy Lee rifle markings. Photo liveauctioneers.com
The rifle performed well in combat in Cuba during the Spanish-American War, during the suppression of the Boxer uprising in China and the Moro uprising in the southern Philippines. Its qualities such as flatness and accuracy of combat, as well as the ability to take a lot more cartridges with you, were noted everywhere. However, the presence of two calibers of small arms in one army turned out to be very inconvenient from a logistical point of view. Already in 1898, it was decided to stop at the 7,62-mm caliber for rifles of all branches of the US military, including the Marine Corps. Nevertheless, on the ships of the Navy, the decommissioned Lee rifles were preserved as training weapons until the 20s of the twentieth century.