From "Sopki" to "Bastion". Combat use of Russian coastal anti-ship missiles

October 25 2012
12
The world's first land-based anti-ship missiles (anti-ship missiles) were created in the USSR. At first, they, like all RCCs, were called projectiles. The term "cruise missile" was introduced by order of the USSR Ministry of Defense on October 30 1959 of the year.

At the beginning of the 50-ies of the XX century, the Kometa anti-ship projectile was created, then, at its base, the Strela-ship (KSS) and coastal underground complexes. Based on them, the design of the Sopka mobile coastal complex began. The C-2 (4К-87) missiles of the Strela and Sopka complexes were almost the same, therefore, in the 60's, the Strela complex was often called the Sopka stationary complex. 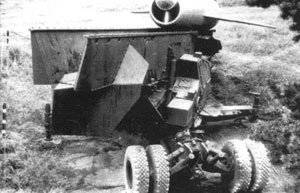 It is curious that the Kamchatka "Sopka" 21-th separate coastal missile regiment (obrp) of the Pacific Fleet had a chance to become anti-submarine weapons. In the autumn of 1959, the American diesel-electric submarine "Tanni" of the "Balo" type, armed with two Regulus-1 cruise missiles, patrolled off the coast of the peninsula. The Yankees boasted that in order to launch their missiles they needed ten minutes of being in a surface position. In fact, this time reached 30 minutes. So our complex had every chance to hit the American diesel-electric submarines. However, immediately after the first launch of the Sopka, the Americans quickly moved away from the shore beyond the hundred-kilometer line.

In 1968, the calculations of the Sopka complexes from the Baltic and Black Sea fleets were sent to Egypt. There 9 October 1973-th held the first combat use. For four Israeli boats approaching the port of Alexandria, five C-2 missiles were launched. According to Egyptian data, one boat sunk, the other was damaged. Israel announced that all the missiles passed by. 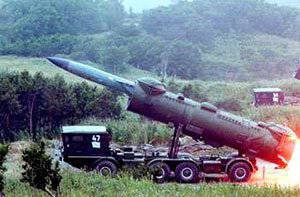 The American battleship "New Jersey" from the end of 1983 began to regularly shell the territory of Lebanon, where there was a civil war. He fired up to three hundred and 406 mm shells a day. The battleship itself was outside the zone of fire of field artillery. It went to the Syrian troops stationed in the Bekaa Valley. The general was killed. In the Cossack bay of Sevastopol, the Redutov regiment’s cargo unit and personnel assembled from the Black Sea missile units were loaded onto the Morflot dry cargo ship fleet. The sailors received an order after arriving in the Lebanese port in three days to march to the position area and strike at New Jersey. However, it is believed that due to the vigilance of US intelligence, the order was not executed. Less than 24 hours after the unloading of the materiel, the battleship at full speed went west and henceforth was not announced in the Eastern Mediterranean.

From 16 July to 2 August 1985 of the year, the 21 th obr of the Pacific Fleet was on duty to prevent violations of the state border of the US Navy nuclear cruiser “Texas”. Estimated for combat duty - excellent.

From 17 May to 11 on June 1987, the regiment worked in the same way on the Arkansas nuclear cruiser. Estimated for combat duty - excellent. 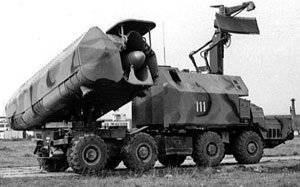 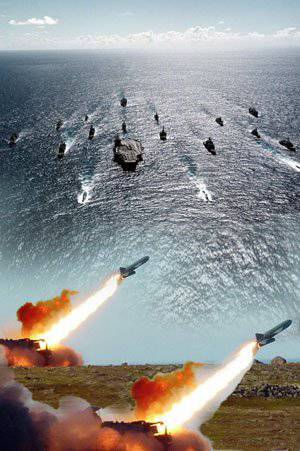 In 1980, two SPUs 3С-51 from the 1267 division were sent from the Crimea to the GDR to participate in the Brotherhood in Arms-80 exercise. Since by this time the Baltic had not yet had combat-ready “Frontiers”, the Black Sea people had to play the role of the Balts. Therefore, the SPU was brought not directly to the GDR, but by rail to Baltiysk, and from there by amphibious ships of the 775 project by sea in Swinemünde.

At the Zapad-81 exercises, the SPU of the 1267 Division was already fired at the landing area of ​​the Baltic Fleet Khmelevka.

The Zapad-83 exercise, held at Cape Taran in 12 kilometers from Svetlogorsk, was attended by the Baltic Four Redoubt 27 BF OBF BF, and from the Black Sea Fleet - two Boundary SPU 1267 of the X division. On a tip from the MRST-1 external targeting system from the Ka-25С helicopter, two P-35B missiles were fired, and after 30 seconds - two P-21 missiles with a BRK. Shooting results are considered successful.

In the 1988 year, during the Autumn-88 exercises, the SPN of the 1267 Division was marched from the place of deployment at Cape Tarkhankut to Cape Yegorlytsky Kut in the Kherson region. 320-kilometer march division made with an average speed of 50 kilometers per hour. As you can see, SPU 3С-51 justified the nickname adopted by the specialists among the specialists - the wheeled launch vehicle (all equipment taken from the launch of the 205У project). Radar "Harpoon" found a target at a distance of 120 kilometers. Division two missiles struck her.

In January, 1986 of the Northern Fleet was formed obd with BREC "Rubezh", stationed on the Rybachiy peninsula in the village of Skarbeevka. The first two launches of Termite missiles in 1988 were unsuccessful, and only on November 14 of 1989 was a normal launch. 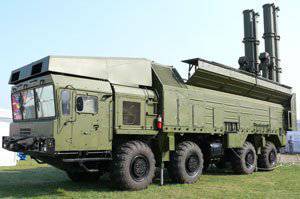 5 July 1981 of the year issued a decree of the Council of Ministers of the USSR on the commencement of work on the supersonic Onyx anti-ship missiles. 10 March 1982-th in OKB-52 passed the protection of the draft design. RCC is made according to the normal aerodynamic scheme with a trapezoid folding wing and tail. The aerodynamics of the airframe, in combination with high thrust-weight ratio, provides the Onyx with high maneuverability (maximum angle of attack - up to 15 degrees), allowing the rocket to perform effective maneuvers of evading enemy air defenses.

The power plant "Onyx" consists of a propulsion ramjet engine (ramjet), working on liquid fuel (kerosene T-6), and a solid fuel accelerator, installed according to the "matryoshka" principle in the combustion chamber of the propulsion engine. A few seconds of his work accelerates the rocket up to speed M = 2. Then the starter is turned off, it is thrown out of the main engine by the oncoming air stream and the Onyx continues to fly at speed M = 2,5, provided by the ramjet propulsion system.

Flight mission is formed according to the data from the autonomous target designation source. The homing head radar can capture a surface cruiser target at a distance of up to 75 kilometers. After the initial capture of the target, the rocket turns off the radar and performs a reduction to extremely small heights (on the order of 5 – 10 meters).

The Bastion-P complex includes up to eight SPUs, a command and control vehicle on the MZKT-65273 chassis, a target designation helicopter complex, and equipment for the head command post.

To find the means for finishing the complex, both options - mobile and stationary - were offered for export. One division of the mobile BRK purchased Vietnam (supply in 2010-m) and two - Syria (delivery in 2011-m).

At the end of 2009 - the beginning of 2010, the two “Bastion” complexes entered service with the 25-th round of 11-th processing (Utash village, Krasnodar region, near Anapa).

The last, third complex (SPU and other machines) was received in the middle of January 2011. Selected in a separate battery. 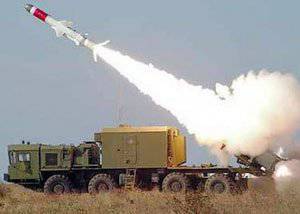 The tests of the Uranus ship complex began in 1983 at the Black Sea Coast Sandy Beam testing range. Due to a number of delays due to technical, financial and political factors, it was adopted only in 2003. On the basis of the ship complex created BRK "Bal-E" (3K-60, 3М-60).

SPU is made in the form of a welded frame installed on the regular reference points of the automobile chassis. On the frame is placed a block of eight transport and launch containers with missiles. When moving from a traveling position to a combat hydraulic system, it raises the unit by a starting angle of + 35 degrees. The time it takes for the complex to be deployed from a marching to a combat position is no more than ten minutes, the firing range is up to 120 kilometers.

In 2004, the state tests of the prototype SPU 3C60 were completed, after which the installation and the rest of the equipment, although without ammunition, were transferred to the 11 of the Black Sea Fleet stationed in Anapa. At the end of 2011, two SPUs 3C60 entered service with the Caspian Flotilla. 26 April 2012-th on the Adanok training ground in Dagestan, was the first shooting from the Ball "Ball". On the targets, anchored in 56 kilometers from the coast, two P-35E missiles were launched. According to the command, both missiles hit targets.

It should be noted that "Ball" and "Bastion" do not duplicate at all, but complement each other. Onyx missile is three to four times more expensive than X-35. In some ways, this pair is similar to the Redut - Boundary pair. Of course, both "Ball" and "Bastion" require refinement.

Experts believe that first of all the data of the BRK are required for the defense of the Kuril Islands, Sakhalin and Kamchatka. There is an urgent need, naturally, in them both on the Caucasian coast and on the Baltic.